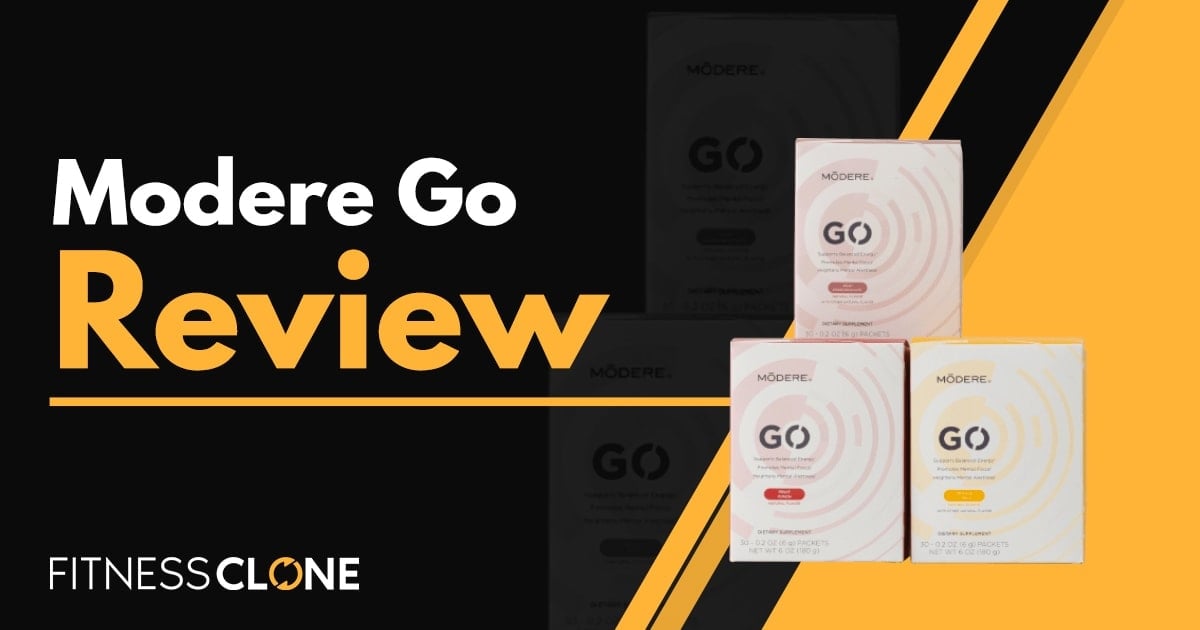 Nootropics are substances designed to enhance cognitive performance. Nootropics have become extremely popular in recent years in a society that demands a lot of cognitive effort. As such, people are always looking for ways to boost their brain performance so they can do more things more effectively.

Modere Go is a nootropic drink supplement that claims it takes a holistic biohacking approach to brain health. Go claims it can optimize your energy, heighten alertness, boost focus, and enhance cognitive function.

Today we are going to take a look at Modere Go and answer some important questions such as its props, cons, price, where to buy, list of ingredients, and most importantly, whether or not it is worth the purchase. Without any further ado, let’s get to it.

Modere Go is a daily energy supplement you can add to your drinks from health and wellness company, Modere. In addition to Modere Go, they have also produced a variety of other well-known supplements including Modere Life, Modere Axis TreBiotic, and Modere Trim. Each pack of Modere Go contains a blend of 11 vitamins, 5 minerals, and 8 nootropics that are “scientifically selected” so you can perform at your best. Simply add a packet to a glass of water and mix for just half a minute. The creators recommend taking at least 1 pack a day, preferably during the morning.

Now real quick: the word “nootropic” is one of those supplement marketing buzzwords, like “superfood” that gets used and abused all over the place. There is no scientific consensus on what constitutes a nootropic and a lot of supplements marketed as “nootropics” just contain stimulants like caffeine. 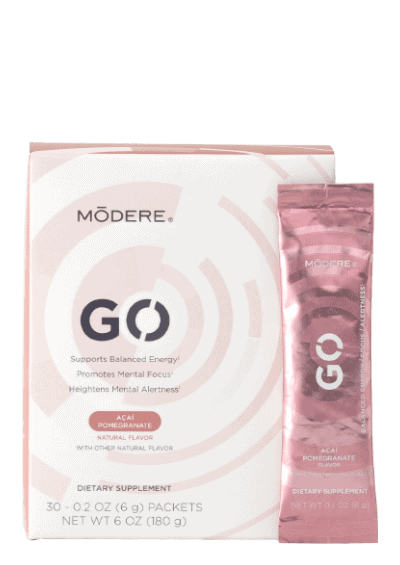 Modere Go claims that it can:

Modere also says it takes a “biohacking” approach to brain health. We don’t really know what that means because “biohacking” is another of those loaded buzzwords. Honestly, whenever we see buzzword laden product descriptions like this we immediately get skeptical. If a product is valuable and works then you don’t need to use fancy marketing language to sell it. The reliance on marketing buzzwords is usually used to obscure, not enlighten.

Go is made by Modere, a company that specializes in natural health products. In addition to the Go drink packets, Modere also makes soaps, lotions, weight loss supplements, and skin supplements. Modere claims that all of its products are formulated with safety-check components and have earned the EPA safe choice label. Modere prides itself on using natural products derived from sustainable supply chains. The company has a pretty webpage that is clearly organized and looks professionally done, which is always great for company reputation.

We also checked out Modere’s BBB profile. They are BBB accredited and have an A+ ranking but they have more complaints than positive reviews which is always a bad sign. To the company’s credit, it seems that they have responded to all complaints and the majority of complaints have to do with the company’s shipping and billing processes.

How Does Modere Go Work?

Unfortunately, there are no product reviews on the company’s main webpage and we also could not find any customer reviews from other third-party retailers like Amazon. So that means we don’t have any first-hand testimonials to the effectiveness of the product.

Modere Go is supposed to work by giving the body a jot of 11 vitamins, 5 minerals, and 8 nootropic ingredients. One of the major ingredients is natural stimulants like caffeine or green tea extract. Modere Go also contains amino acids that promote good metabolism and folates that support brain health.

Unfortunately, though, we don’t really have a good idea of how well this product actually works. 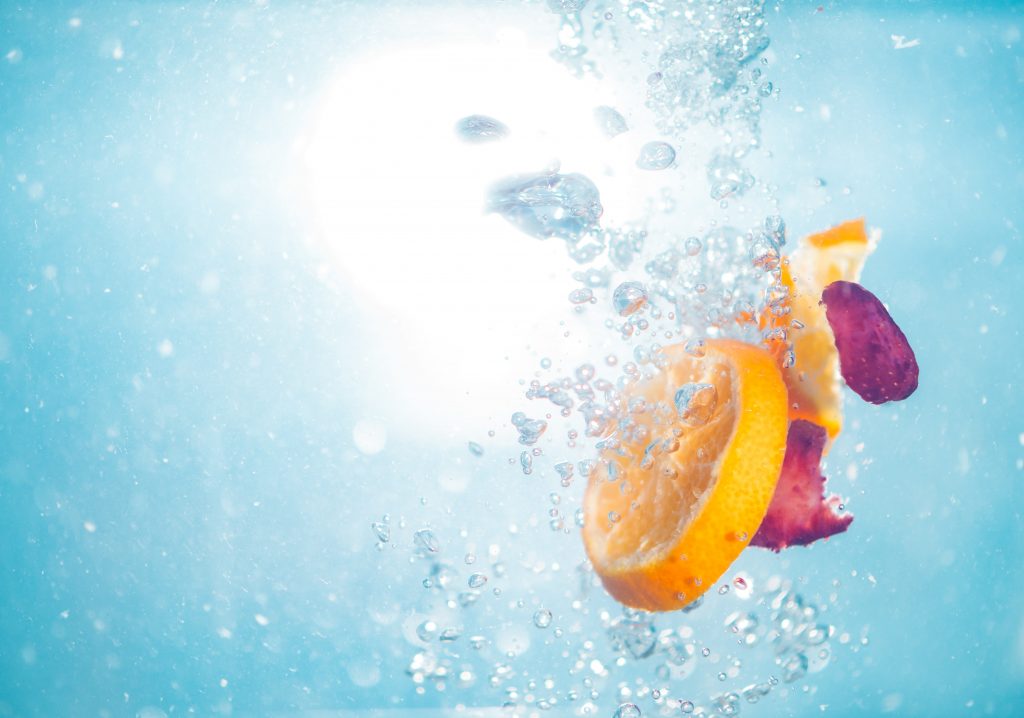 Modere Go contains a lot of standard ingredients that supplement drunks have such as vitamin A, B, C, and Zinc. The real draw of Modere Go is the proprietary blend which contains:

The main problem with the list of ingredients is that there is no indication of the proportions of the proprietary blend. So while it has all those ingredients, we have no idea how much of each is in there. So it could have way more caffeine than normal or way less, there is no way to tell.

Moreover, it seems that the “nootropics” are basically just some amino acids and stimulants, nothing special. We told you that “nootropic” was just a marketing term.

Where to Buy Modere Go and Cost

You can buy Modere Go from the manufacturer’s website. Modere Go does not seem to be available in any other retailer, online or physical. A 30-day supply of Modere Go costs $45.99, which is pretty steep for some flavored drinks if you ask us.

With a steep price and our rating of 2.9, Modere Go may not be your cup of tea. Here are some alternative nootropics that may better suit you:

Thrivous Clarity is a nootropic brain supplement that we rate at a 3.7. You can get a month supply of Thrivous for $30.

BrainZyme is another nootropic supplement designed to improve thinking with healthy nutrients. We rated BrainZyme at a 3.7. They also offer a very competitive price – a 30 pack for $23.

GenBrain is one of our top rated nootropics, with a 4.8 rating. Not only does GenBrain rate highly for us in all areas, but they also offer a FREE bottle to get started!

One last alternative to Modere Go is NeuroGum. NeuroGum is a nootropic that includes concentration aids, cognitive enhancers and “smart drugs”. We gave NeuroGum a 4.0 rating, and with a price point of $21 for 54 pieces, this is a great alternative.

Modere Go: Worth it or Not?

We are going to have to pass on this one. Unfortunately, Modere Go is just not unique enough from other products to stand out or justify the high price tag. All the “nootropics” are basically stimulants and amino acids you can easily find in other things. We have to say no to Modere Go.

Overall Rating: 2.9 out of 5
Categorized in: Nootropic Reviews, Reviews