Thrivous Clarity Review – How Does This Brain Supplement Stack Up? 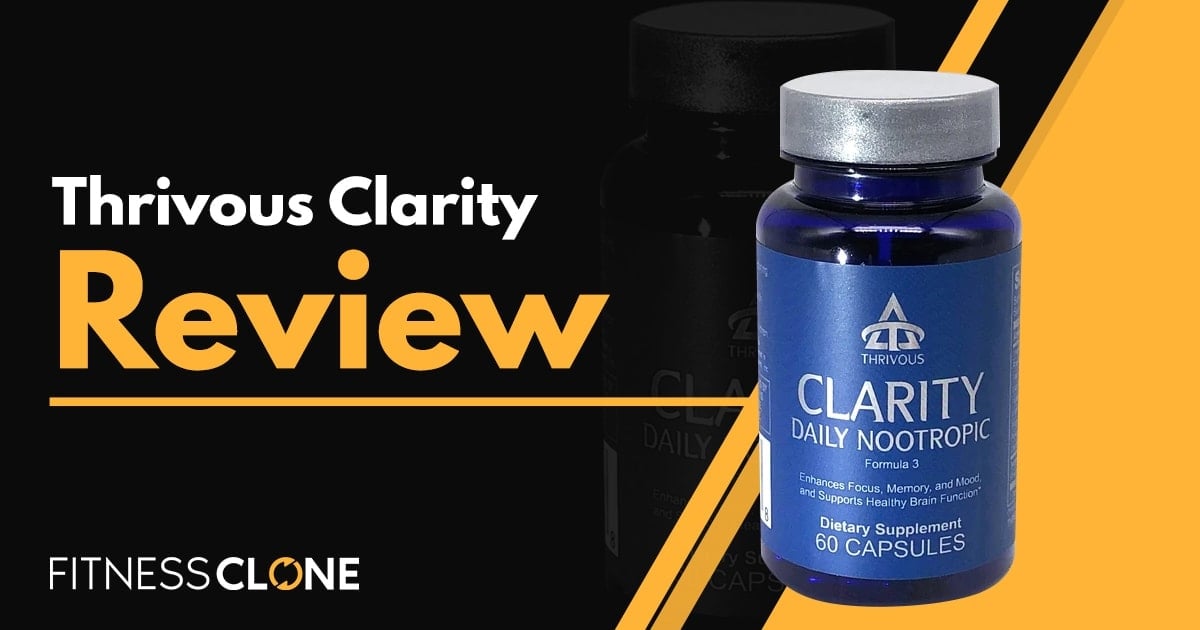 Nootropic supplements have become a popular commodity in the health and wellness industry. As more and more brands find their way on the market, it’s becoming very difficult to distinguish the quality from the cheap.

Nootropics can be a great way to give your brain and cognitive function a boost. Much like pre-workout does for the body, nootropics wake up your brain and improve performance throughout the day.

There are plenty of things to keep an eye on when shopping for nootropics, especially since you’ll likely find something wrong with every brand. Some companies use harmful ingredients, while some use too little or too high of a dose. There are even some that just pack a bunch of vitamins in a capsule and call it a nootropic.

What is Clarity by Thrivous?

Clarity is a daily nootropic formulated and distributed by Thrivous, a company based out of Salt Lake City, UT. While their claims will seem similar to just about every other nootropic on the market, they do things a little differently — and you’ll appreciate it.

With most nootropics, they seem to hide behind their claims, failing to ever produce any evidence to back them up. Some companies will go as far as hiding the nutrition label and ingredient list from the consumer. Thrivous is built off transparency, which includes everything from ingredients, doses, customer service claims, and even customer reviews right on their website.

Thrivous has a history of reputable business and it shows in their A+ rating by the Better Business Bureau. They accurately display their Certificates of Analysis and make all of their products in the USA. They sell supplements for just about anything.

Clarity, their nootropic supplement, is designed to give your brain the mental boost it needs. It claims to support mental focus and clarity, but will also improve your mood and the overall health of your brain.

Whether that’s true or not will depend on the ingredients they use, which is normally where companies go wrong.

Breaking Down the Ingredients

Much like anything we put into our bodies, the ingredients will always matter and ultimately tell you what to expect out of the supplement. Taking a look at the ingredient label can save you from a headache down the road — literally and figuratively.

Luckily, Thrivous is very open about what they include in their products.

Thiamin is a B-complex vitamin commonly referred to as Vitamin B1. It is found in many nootropic supplements, such as Brain Awake and HVMN Nootrobox. It’s essential for turning carbohydrates into energy, glucose metabolism, and digestion. It has also been linked to improving your mood and reducing stress, but there hasn’t been much research to back any cognitive benefits. Thiamin could improve long-term health of neurons and neural pathways.

There are 25mg of Thiamin in two capsules of Clarity, which is right around the suggested daily intake of 15-20mg per day.

Also known as Vitamin B2, riboflavin is a water-soluble vitamin that we flush out of our body on a daily basis. Since we don’t store these vitamins and don’t produce them naturally, we must make sure we receive enough in our diet. Being deficient in vitamin B2 can lead to bad skin, digestive issues, lack of blood cells, and poor cognitive function.

The suggested intake of riboflavin is 1.3mg, with Clarity giving you 25mg per two capsules.

Niacin, also known as Vitamin B3, is an essential vitamin for just about every part of your body. Those with a deficiency have reported memory loss, confusion, fatigue, depression, and skin problems. Niacin as a supplement can help reverse these effects and give your brain the necessary energy to function how it should.

The daily recommended intake of Niacin is 35mg per day. Clarity by Thrivous will include 100mg, giving you more than you need. Since it’s water-soluble, excess will pass through your system instead of being stored.

Vitamin B6, which some people might know as Pyridoxine, can improve your body’s ability to convert carbs, protein, and fat into energy. Much like the other B-vitamins, vitamin B6 is essential to the formation of red and white blood cells, but can also help create neurotransmitters to improve overall mental health.

Most people get enough of this vitamin in their daily diet, but it is not made naturally by our body. The recommended daily intake of vitamin B6 is 2.5mcg — there are 25mcg in Clarity.

Yet another B-vitamin, folate is commonly referred to as Vitamin B9. You can find this vitamin in many fruits, vegetables, legumes, and even eggs. It is essential to the creation of DNA, red blood cells, white blood cells, and converting carbs into energy. There isn’t much evidence supporting any cognitive benefit, but it could help reduce cognitive decline.

The average adult is recommended to intake 400mcg per day, which is the exact amount of folate included in Clarity.

Vitamin B12 is a very important vitamin for your body, responsible for making your DNA and red blood cells. Since your body doesn’t produce Vitamin B12 naturally, you must get it from foods like eggs, fish, meat, and poultry. Having a deficiency in this vitamin can lead to depression, a bad mood, the loss of neurons in the brain, and lower energy levels.

The daily recommended amount for an adult is around 2.4mcg per day. Clarity has 240mcg.

Biotin is another B-complex vitamin, also known as Vitamin H. A biotin deficiency is common in people that don’t eat egg yolk, nuts, soybeans, whole grains, mushrooms, and bananas. A deficiency has been linked to an improved mood, energy levels, neurotransmitter activity, memory, and nerve signals.

Clarity has 300mcg of Biotin in it, which is way more than the daily recommended of 30mcg. Since it is water-soluble, excess biotin will simply pass through your system when you urinate.

Once again, another B-complex vitamin — this time vitamin B5. Pantothenic acid is essential for creating red blood cells, maintaining a healthy digestive system, synthesize cholesterol, and reduce stress. It can also help your body process other B vitamins like B2 (riboflavin).

The daily suggested amount of pantothenic acid is 5-10mg. Clarity will give you more than enough with 100mg.

Unlike most of the ingredients thus far, zinc is a mineral — not a vitamin. They are similar to the vitamins listed above because your body won’t store zinc. Therefore, you must receive a daily intake in order to avoid a deficiency.

Finally, we have an actual nootropic ingredient in this formula! Bacopa monnieri is a widely used ingredient in most nootropic supplements, like GenBrain, and has plenty of scientific research to back it. Used for centuries, bacopa monnieri is known to have antioxidant and anti-inflammatory properties, while also improving memory and overall brain function.

The normal dose of bacopa monnieri is around 300mg, which falls in line with the 320mg in Clarity.

Another popular nootropic ingredient, Rhodiola Rosea has also been used for centuries and is no secret to the scientific community. It can reduce stress, fight fatigue, ease depression, improve brain function, and help fight cancer.

Normal doses for a positive effect range from 200mg-500mg, depending on the person. Clarity will give you a moderate amount of Rhodiola Rosea at 300mg.

Several years ago, Thrivous received a lot of criticism concerning a misprint on the ingredient label. That issue has since been fixed with a new formula and I actually like this one better than the old one.

For starters, the bottle is nice and classy — featuring a lot of blue with silver accents. They don’t pack the label with claims and do a great job of clearly listing what’s in each capsule.

We mentioned how much of each ingredient there are above, but here’s a quick breakdown of the ingredient label:

Thrivous recommends taking two capsules at a time, but not exceeding 4 capsules in a 24-hr period. The bottle you’ll receive after purchase will include 60 capsules, giving you a month’s supply for $30. You can save a few dollars by subscribing to a monthly delivery service. 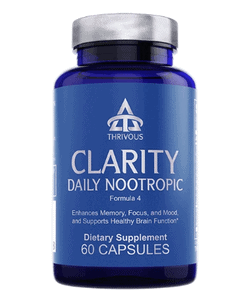 Best Deal on Thrivous ClarityWe scour the web for the best deals on supplements. Want the best price? Click the button below for the best savings!GET THE BEST PRICE

Clarity by Thrivous is available on their official website, along with a variety of other supplements, as well as Amazon.

Like most nootropic supplements, you’ll find a lot of good and bad in each product. Overall, Thrivous does a good job of keeping you out of harm’s way with Clarity. There’s nothing in these capsules that will damage your well-being, but there are questions as to how effective it will be in terms of cognitive benefit.

Let’s weigh out the various pros and cons to this product.

Clarity by Thrivous claims to be a nootropic that will improve mental clarity, mental focus, mood, and brain health. They guarantee transparency, a money-back guarantee, and a product fully made in the USA. While the final three claims are true, the first four are a little more cloudy.

With all of the vitamins included in this stack, your brain will likely see an improvement in energy more than anything. Outside of that, don’t expect much difference. The 320mg of Bacopa Monnieri and 300mg of Rhodiola Rosea could spark a fire in some people, but Thrivous could’ve used a little more here — especially with no other nootropics found in this stack.

The lack of zinc is also unappealing here. There’s not nearly enough of it to make a difference. Thrivous was on the right track with this product, but it simply falls short of expectations in the nootropic community.

Clarity by Thrivous simply doesn’t have enough power to warrant a recommendation, especially with other nootropic supplements out there bringing the heat. It’s worth a try if you’re looking for an entry-level nootropic, but don’t expect any major cognitive improvements.

Personally, it would be nice to see some other nootropics like Ashwagandha, L-Theanine, Lion’s Mane Mushroom, or Ginkgo Biloba. The lack of a stimulant like caffeine will also turn a lot of people away.

With a few tweaks, this a great product.

Overall Rating: 4.07 out of 5
Categorized in: Nootropic Reviews, Reviews