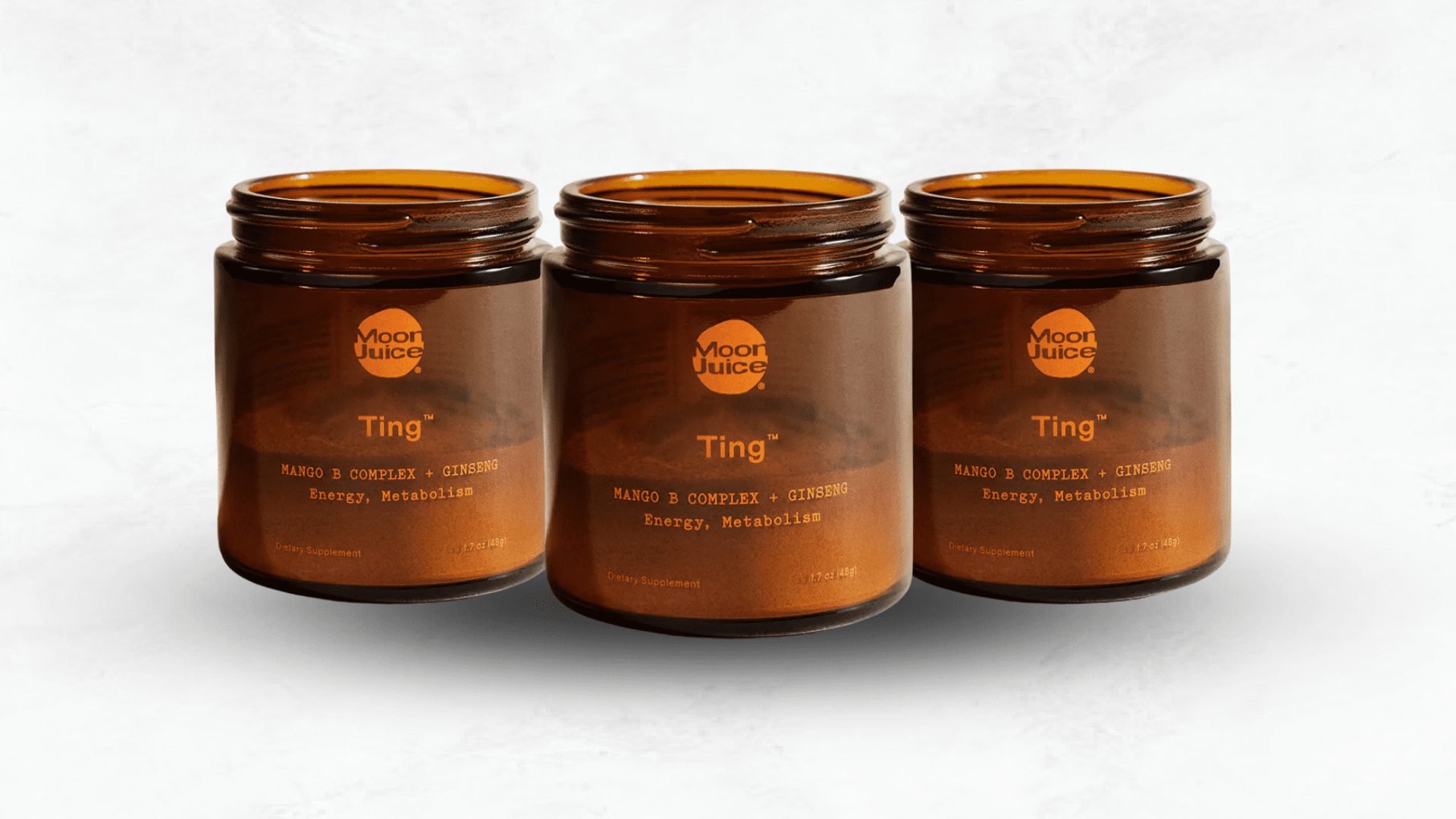 Do you ever feel like that morning cup of coffee is just not enough? Have you added a second or third cup later in the day to get by, only to feel even more tired? If this sounds like you, you’re not alone. Although caffeine is a great way to boost your energy levels quickly, you also must deal with the inevitable crash. Because of this, many consumers have turned to stimulant-free supplements to boost energy, such as Moon Juice Ting.

But do supplements like Moon Juice Ting actually boost energy, or are they marketing a placebo effect? Let’s take a closer look to find out if this supplement can really give you the energy boost you crave in this Moon Juice Ting review.

Moon Juice Ting is made and produced by Moon Juice. This health and wellness brand utilizes adaptogens to nourish the calm within. With an emphasis on stress management, Moon Juice carries a variety of products ranging from skincare and hair care to general health, many of which we have reviewed.

One of Moon Juice’s more popular products, Ting, was created for those struggling with low energy levels. It has since sold out, and consumers who wish to purchase it must be placed on a waitlist.

Marketed as a non-stim wake-up call, Ting helps with energy, metabolism, and mood without the use of stimulants. Instead, it uses B vitamins extracted from organic Tulsi and guava, along with adaptogenic ginseng. Ting comes in an easily dissolvable powder with a light mango flavor. To use, simply add it to a glass of water.

According to their website, Ting provides a boost of B complex vitamins, including vitamin B12 and folate, along with adaptogenic ginseng to boost energy, metabolism, and mood. The B vitamins are extracted from organic Tulsi and guava, which provide cofactors that help with metabolism by converting fat, protein, and carbs into energy. Methylated vitamin B12 helps to boost serotonin levels to improve mood. Lastly, ginseng brings calming energy so you can be more alert and productive without the crash.

This supplement is marketed towards those looking to naturally boost energy without the use of traditional methods. These are often loaded with sugar and may increase oxidative stress on the body, such as coffee, energy drinks, and soda.

Moon Juice Ting contains a variety of B vitamins as well as adaptogenic ginseng. We’ll take a closer look at these ingredients below.

Ting supplement contains 7 out of the 8 B vitamins, missing only biotin. B vitamins have long been used as energy enhancers because of the role they play in energy metabolism. B vitamins act as coenzymes that help to process macronutrients, such as carbs, protein, and fat, into energy for our body to use. Vitamin B12 acts as a cofactor for the synthesis of various neurotransmitters, such as serotonin which helps to regulate mood.

Also known as Asian ginseng or Panax ginseng, ginseng is an antioxidant-rich herb believed to improve mental and physical fatigue. Many animal studies have found a link between components found in ginseng and decreased oxidative stress with increased energy production. Both can help fight low-energy levels and fatigue. Ginseng has also been associated with improving physical performance. Although promising, more studies are needed with human trials.

Moon Juice Ting is consistently rated 4-4.8 out of 5 stars on various websites. It’s clear their consumers find this product to be well worth the hype. Based on the ingredients and comparative research, many have likely found real success with this supplement for its intended use. Although like any supplement, it may not work for all, it’s typically not harmful. As far as non-stimulant energy-boosting supplements go, you can’t go wrong with these ingredients.

Who is Moon Juice Ting Best For?

Moon Juice Ting is a supplement that would be best suited for those in good health, who do not take any medications or suffer from chronic conditions, and who are looking to boost their energy without the use of stimulants. Always speak to your healthcare provider before starting a supplement to ensure no contraindications. Those who are at risk of deficiencies in B vitamins would likely benefit the most from this supplement. Those at risk include those with kidney disease or those who follow a vegan or vegetarian diet.

Moon Juice claims its non-stim energy-boosting supplement, Ting, helps with energy, metabolism, and mood. Made with B vitamins and adaptogenic ginseng, their claims are undeniable. Although this supplement might not be for everyone, and there is still some research needed regarding the efficacy of Panax ginseng, this combination of ingredients will likely do the trick for most. With vitamin B12 for mood, 7 out of 8 of the B complex vitamins for energy and metabolism, and ginseng to fight fatigue, you can say goodbye to caffeine with confidence.

Consuming supplemental B vitamins is considered generally safe, with only mild side effects reported. Certain B vitamins may induce flushing, a burning tingling sensation that can be uncomfortable for some. This is mainly seen in high doses of niacin (50mg or more). Moon Juice Ting contains 3.4mg per serving.

Consuming too high levels of vitamin B6 through supplementation can increase the risk of ataxia, heartburn, nausea, photosensitivity, and numbness. Some medications can interact with vitamin B6 supplementation, including Altretamine, Barbiturates, anticonvulsants, and Levodopa.

Lastly, high doses of vitamin B12 can cause headaches, nausea, vomiting, diarrhea, fatigue, and weakness. This is typically only seen in those treated for a deficiency. Taking B12 and other B complex vitamins is generally safe. Your body will use what it needs and excrete the remaining via urine.

You can purchase Ting directly from the official Moon Juice website.

GenBrain Review -Does it Live Up to the Hype?

Prevail Pre-Workout Review – Is This Cutler Nutrition Powder Worth Using?

Blowfish For Hangovers Review – Does It Actually Work?