Insane Labz I Am God Review – Does This Pre-Workout Work? 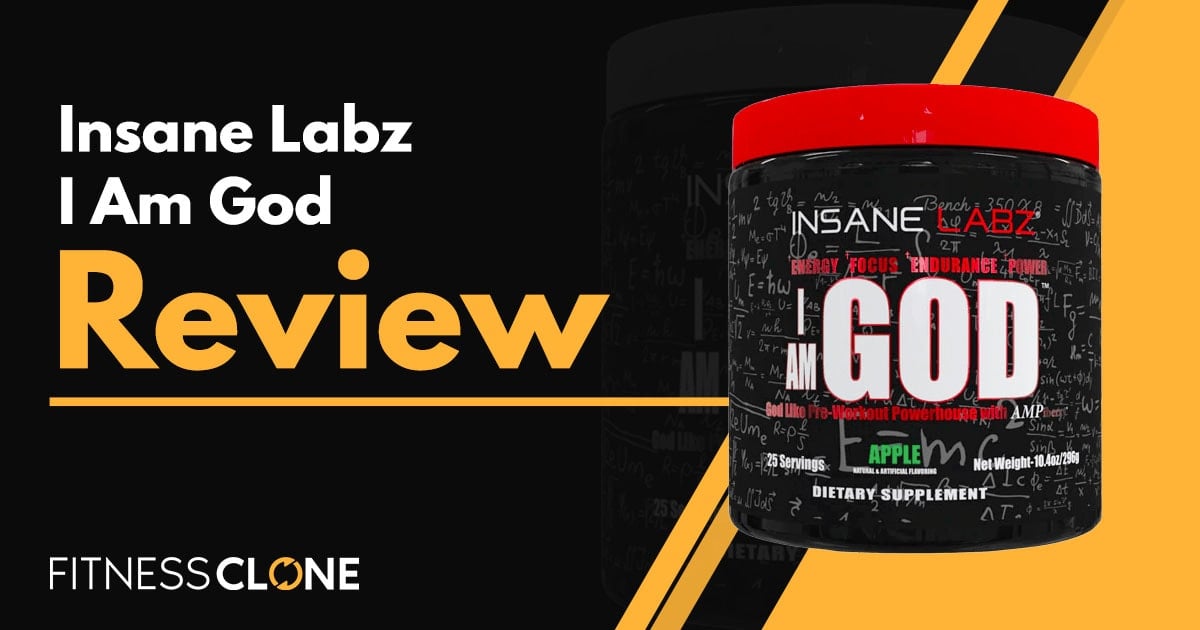 Would you call yourself an adrenaline junkie? Do you love the feeling of insane energy and working out at a high intensity? If so, you’ve probably delved into the supplement world to see which pre-workouts can give you that monster boost in energy and performance. 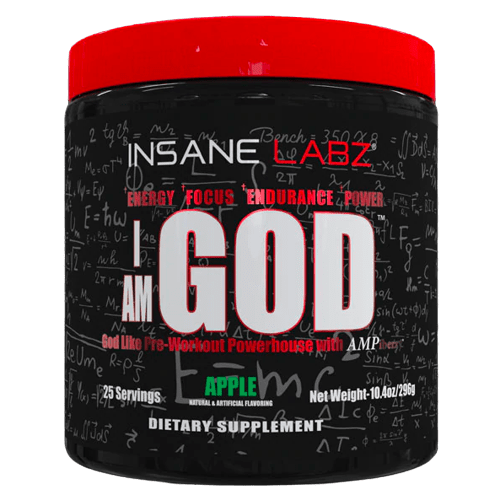 About Insane Labz I Am God

I am God is a pre-workout supplement created by Insane Labz. With products such as this, Possessed, and Psychotic, it’s clear that Insane Labz aims to create top-of-the-line supplements that are as hardcore as their names.

It’s no surprise that Insane Labz I Am God is designed to be an all-powerful pre-workout for maximum energy and performance. It is loaded with high amounts of caffeine, betaine, DMAE, and beta-alanine to give you performance results on a “godly level,” as they say.

Insane Labz I Am God Benefits

Clearly, there are some benefits to being God, but what are the benefits of this Insane Labz I Am God supplement? The makers claim that I Am God will give you: 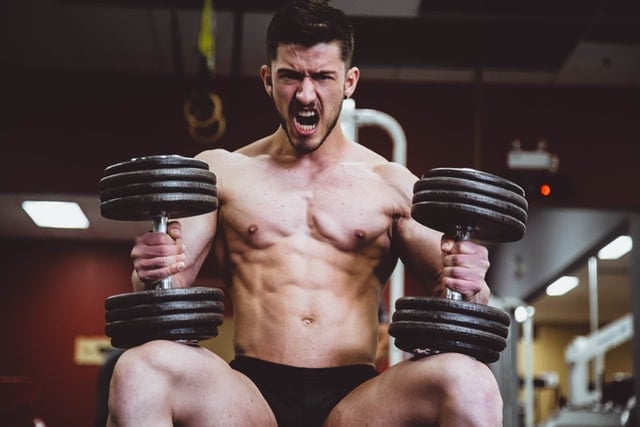 Insane Labz I Am God is loaded with caffeine, DMAE, beta-alanine, and other ingredients designed to maximize energy, endurance, stamina, and overall workout performance.

Could you really become as strong as a god? The makers of I Am God sure think so, due to the inclusion of creatine, betaine, and other strength-promoting ingredients.

Lastly, I Am God is advertised to help you build lean muscle mass and insane gains to help you get chiseled like a Greek god all of which stems from the ingredients in the I Am God blend.

But can Insane Labz I Am God really give you superhuman workout results and muscle gain? Read on to find out!

Insane Labz I Am God Ingredients

Insane Labz I Am God comes in powder form. Below is what’s in each 1-scoop serving:

They also note that the total caffeine content is 400mg from all sources. 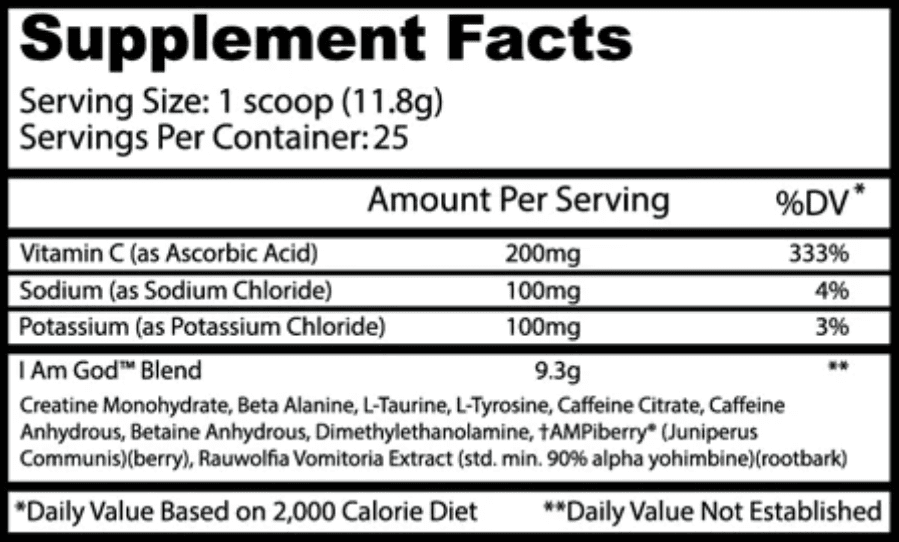 The I Am God blend starts off with creatine monohydrate, one of the most popular workout supplements in existence. Creatine supplementation is able to amplify creatine stores in the muscles, which then can help to increase energy and strength during intense workouts.

Overall, research shows that creatine monohydrate supplementation is beneficial for muscle growth and particularly power, strength, and sprint performance, but it can also improve muscular endurance too.

Recommended dose is around 5g.

Up next is beta-alanine, which is an amino acid most known for its ability to increase muscle carnosine stores, which in turn improves muscular endurance. Plus, beta-alanine acts as a pH buffer, thus delaying muscular fatigue.

Overall, beta-alanine is effective for improvements in various exercises, especially high-intensity exercises such as strength and power training.

Recommended dosage is 3 to 6g.

Another amino acid in I Am God is taurine. Taurine is found abundantly in skeletal muscle, and supplementing with taurine appears to saturate the muscles with this amino acid, resulting in improved energy metabolism and overall function.

Taurine supplementation has been found to increase aerobic endurance as well as muscle endurance, strength, and power. Plus, it has anti-inflammatory effects that may aid in exercise recovery.

Recommended dose is around 2 to 3g.

I am God also has tyrosine, an amino acid that serves as a precursor to the neurotransmitters dopamine and norepinephrine. These two neurotransmitters are often depleted under stressful situations, and they’re important for alertness, mood, and well-being.

Research has shown that tyrosine supplementation increases dopamine and norepinephrine and can improve mental function in people under stress. However, its specific benefits for weight training are inconclusive.

And it is well-known that caffeine increases central nervous system (CNS) activity and can improve alertness, focus, strength, and endurance, while also reducing feelings of fatigue and even pain in some cases. Basically, caffeine fires up the nerves and muscles, so you can work out at a higher intensity and for a longer period of time.

If you are sensitive to caffeine, though, there are pre-workout options available that do not include this ingredient. For example, Amplify Pre-Workout does not contain caffeine and BlackWolf Pre-Workout offers a caffeine-free option as well.

Up next is the amino acid betaine. Betaine has a few different functions, but related to exercise, it can help increase cellular hydration, which can also increase muscular pumps and possibly aid performance. Other research shows betaine may increase nitric oxide and can improve muscle protein synthesis.

Overall, betaine is actually better for body composition changes than improvements in muscle and strength, but it’s still somewhat effective for the latter.

DMEA is a precursor to choline, which then helps to produce acetylcholine, a neurotransmitter involved in many cognitive functions such as memory and focus. However, there isn’t really any research showing DMEA can improve exercise performance.

AMPiberry is a trademarked form of juniper berry extract, and it came to market at least partially as a replacement for DMHA after that was banned. Essentially, it is designed to increase the effectiveness of caffeine and other stimulants, but there hasn’t been much specific research on it.

The last ingredient is rauwolfia vomitoria, which is known for its high concentration of alpha-yohimbine. Yohimbine is an alpha-adrenoreceptor antagonist, which means it can result in a hyperadrenergic state, which basically means your central nervous system is more ramped up.

It drives up dopamine and norepinephrine, which could improve mood, focus, and alertness, although more research is needed in exercise performance specifically.

Does Insane Labz I Am God Work?

From the looks of it, Insane Labz I Am God has the potential to be a pretty strong pre-workout. It contains a number of different stimulant sources, such as caffeine and alpha-yohimbine, along with some of the most well-researched pre-workout compounds today, including beta-alanine, betaine, and creatine. 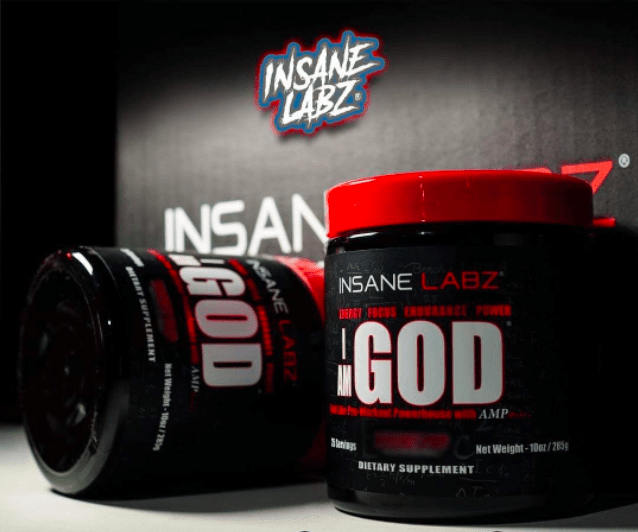 The problem is that all of these ingredients are included in their Proprietary Blend, so it’s impossible to know how much of each ingredient is in there.

Now, the total weight of the blend is 9.3g, so that’s pretty high. But given that you typically want around 5g of creatine and 4g of beta-alanine, that doesn’t leave much room for the rest of the ingredients, which makes it likely that the ingredients aren’t at optimal dosages.

Even still, we do know that there is 400mg of caffeine from all sources, so this is definitely going to give you an energy boost. And combined with the fact that the other ingredients should provide at least some benefits for strength, endurance, power, etc… then we’re looking at a solid pre-workout overall.

Despite the fact that Insane Labz I Am God should provide benefits, you have to be careful with the claims they make.

They use some pretty exaggerated language when talking about the benefits, saying that I Am God will give you insane energy and endurance, deity-like strength, and divine physique results.

This is marketing, of course, but don’t expect I Am God to really do anything miraculous, even though it should help you go a little bit harder, for longer.

So, I Am God can probably help you bust out a couple more reps, lift a few more pounds, or do another set or two of sprints at high capacity, for example. And these little improvements could be all the difference you need, so the fact that it isn’t a miraculous supplement doesn’t mean it won’t have benefits.

Who is Insane Labz I Am God Best For?

With 400mg of caffeine and a number of other pre-workout ingredients, Insane Labz I Am God is best for people who want a massive surge in energy for their workouts and who also want to have more strength, endurance, power, and overall better performance. 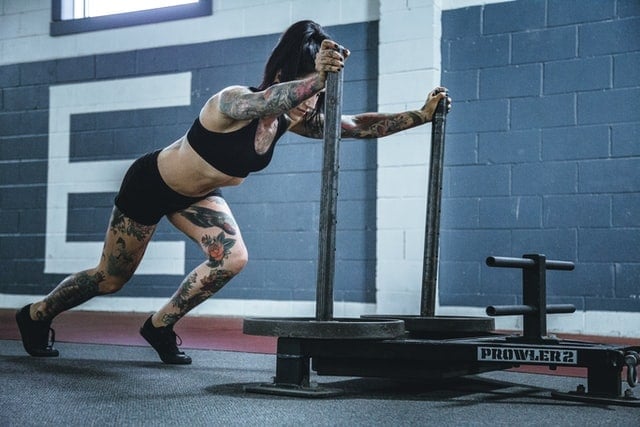 I’d be a little cautious as a professional athlete, bodybuilder, or lifter simply because some of the ingredients have a slight chance of being banned or otherwise tightly regulated down the line, even though they’re not now.

But if you’re a recreational lifter, bodybuilder, or athlete, go all-in on this supp.

Is Insane Labz I Am God Safe?

There are a few side effects to keep in mind when it comes to I Am God, especially due to its high stimulant content. These include:

Insane Labz I Am God is manufactured in the USA in an FDA-registered, GMP-certified facility.

Where to Buy Insane Labz I Am God

You can buy I Am God on the Insane Labz website at this product link. 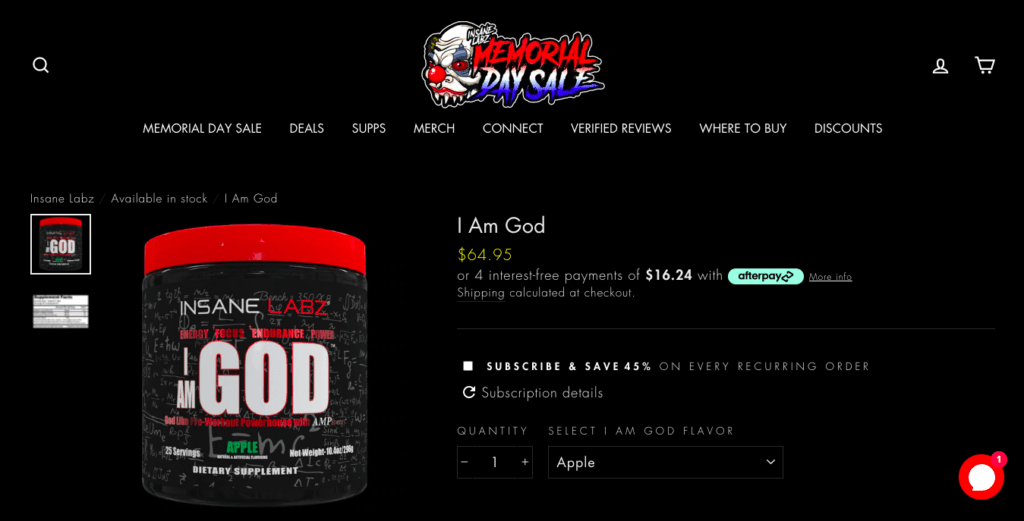 There are 25 servings (25 scoops) per container of I Am God for a price of $64.95. You can choose from 5 different flavors: Apple, Drink Ye All of It (Grape), Fruit Punch, Rocket Pop, and Thou Shalt Not Covet (Orange).

So, at a price of $2.60 per serving, Insane Labz I Am God is an expensive pre-workout. You could play around with the serving size a bit by maybe going with a half scoop to start if you’re worried about the price and/or feel that you don’t need as much caffeine as what’s in the regular serving. But then you’d also be lowering the amounts of the other ingredients.

Dymatize Super Mass Gainer Review – Is it Worth Trying?

Vega One Organic Review – Does This All-In-One Shake Really Have It All?

Pre-Kaged Review – Will This Pre-Workout Give You The Energy You Need?

Leptitox Review – Is This Weight Loss Supplement Worth The Purchase?

Prevail Pre-Workout Review – Is This Cutler Nutrition Powder Worth Using?

Hydroxycut Gummies Review – Can These Gummies Help You Lose Weight?

Elimidrol Supplement Review – In The Mood For Mood Support?