Moon Juice Power Dust Review – Should You Use This Supplement? 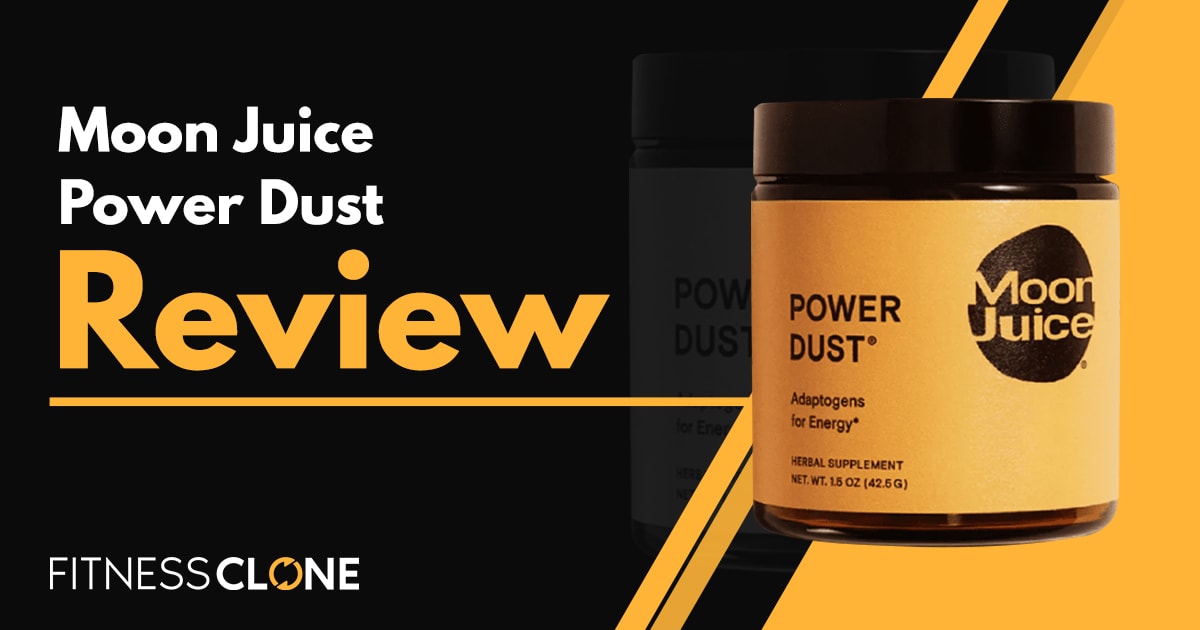 Adaptogens are a hot topic right now in the health and wellness industry.

Many people are using adaptogens to supposedly reduce stress, boost energy, and improve overall vitality. These supplements are sometimes even used as alternatives to get people off of coffee or energy drinks.

As a holistic health practitioner, I’ve used certain adaptogens with my clients too, depending on their situation.

But as always, it’s important to make sure that the adaptogens you’re using are evidence-based, safe, and effective.

Power Dust is a health product made by Moon Juice, a company that focuses on all-natural, typically plant-based products. Moon Juice has produced several other supplements as well, many of which we have previously reviewed.

Moon Juice Power Dust is advertised as a revitalizing blend of adaptogenic herbs and medicinal mushrooms to target stress and support overall health, energy, and vitality.

Their formula was influenced by Traditional Chinese Medicine (TCM) and Ayurveda, and features many prominent herbs from those medicine systems, such as ginseng, cordyceps, astralagus, and ashwagandha.

All it takes is one teaspoon of the powder mixed with any liquid of choice, and you have a potentially powerful, stress-reducing drink.

Not to mention, it only has 10 calories per serving.

Moon Juice Power Dust is designed to help the body manage stress. And it is also advertised to deliver the following benefits:

If you’re an athlete or just an average exerciser, you don’t want to get out of breath before your workout is over.

And Moon Juice Power Dust claims to improve stamina and endurance as well as overall lung capacity through the use of cordyceps, eleuthero, and other adaptogens. And this may help you work out longer without getting tired too quickly.

A lack of energy takes a toll on you, physically and mentally. Without enough energy, you won’t be as productive or efficient in whatever you’re doing.

That’s why Moon Juice Power Dust may help you here, as they claim it will rejuvenate your energy with natural energizers, such as ginseng. This may give you the boost you need to power through your day and get more done.

Being sick is no fun, as it can keep you from competing in sports, working at your job, or going to the gym.

But Power Dust has a few ingredients which are designed to support immune function and help the body become more resilient, such as astragalus. And who wouldn’t want to be healthier as often as possible?

Afternoon slumps or even morning grogginess are very common. And fatigue obviously negatively affects your physical and mental performance.

Rather than relying on caffeine, Moon Juice Power Dust uses energizing adaptogens, such as ashwagandha, to improve your resistance to fatigue. This could help you be more invigorated for work, school, sports, or any other important things in your life.

Heart disease is on the rise today, and while there are many factors involved, an unnatural, unhealthy lifestyle is the main factor.

Now, Moon Juice doesn’t claim to prevent heart disease. But it is advertised to support general cardiovascular function with Schisandra and other ingredients.

Muscle soreness, aches, pains, and lack of mobility are all signs of impaired recovery. And without adequate recovery, you simply won’t get the most out of your exercise program.

But Power Dust claims to decrease stress and help your muscles and nervous system recover more quickly. They say this is due to Rhodiola, ashwagandha, and other adaptogens.

So, is Moon Juice Power Dust a next-level adaptogen supplement? Or is it just a run-of-the-mill product better left on the shelf?

Read on to find out!

Below are all of the active Moon Juice Power Dust ingredients:

Cordyceps mushroom is a medicinal mushroom that has been used in TCM for thousands of years. It has various bioactive compounds, such as cordycepin.

And there is some evidence that cordyceps is beneficial for anti-aging, exercise performance/endurance, lung function, and sexual function.

Schisandra berry has also been used in TCM and Asian medicine for many years, such as for kidney, liver, and brain function.

Modern evidence shows that Schisandra berry may have anti-allergy and liver-protective effects, among other things. This is due to various lignans and polysaccharides in the berries.

Eleuthero, or Siberian ginseng, has been used in many traditional medicine systems over centuries.

It is a very potent adaptogen, which seems to be due to eleutherosides and other compounds in it. And there is evidence that eleuthero can improve physical performance during high-intensity exercise.

Plus, it may offer anti-fatigue, anti-anxiety, and anti-inflammatory effects, among a few other things.

Rhodiola is another powerful adaptogen that has been used in a number of traditional medicine systems in European and Asian countries.

It is one of the most well-researched herbs in regard to being able to increase resilience to stress, due to many compounds in it, such as triterpenes and flavonoids.

And Rhodiola also seems beneficial for brain function, anxiety, depression, fatigue, and exercise performance. It is also used in many nootropic formulas, such as Four Sigmatic Focus.

Astragalus has been used in TCM for many years for many potential health effects.

It contains various flavonoids and polysaccharides, which seem to offer benefits for heart health, immune function, and possibly anti-aging.

Ashwagandha is another adaptogenic herb, which has been used for thousands of years in Ayurvedic medicine, often called the “king of Ayurvedic herbs”.

It has been shown many times to increase the body’s resistance to stress, due to withanolides and other compounds in it.

And this seems to carry over into many other health benefits, such as reduced anxiety and depression, lower fatigue, improved hormonal health, better cognitive function, and increased exercise performance.

The best evidence for ashwagandha is for reduced anxiety and stress, which is likely why it’s also in supplements such as Chill the F* Out.

Asian ginseng, which is often called true ginseng, is a traditional herb used in Asian countries for thousands of years.

The main beneficial compounds in it seem to be ginsenosides. Asian ginseng has stimulatory properties, and it seems beneficial for increasing energy, reducing fatigue, and even supporting heart and immune health.

Stevia is an herb that is used as a natural sweetener, due to compounds in it, such as rebaudioside A.

Also, stevia leaf may have some anti-inflammatory and antioxidant functions, which may help protect the brain, liver, and other organs.

It seems likely that Moon Juice Power Dust will work.

Every one of the ingredients in the Power Dust formula are evidence-based and proven to offer benefits for energy, immunity, fatigue, exercise, brain function, and more.

However, Moon Juice uses a proprietary blend, so it’s impossible to know how much of each ingredient is in there.

I really would like them to list out each ingredient because this would make it an even better product.

We do know that the total weight of the blend is 3g, so this is likely a bit low, considering that some of the ingredients have a recommended dosage of around 1g or more.

All of the benefits claimed by Moon Juice are backed by research. But given that Moon Juice Power Dust has a proprietary blend, it’s hard to say the degree of benefits you’ll get.

But overall, the different adaptogenic herbs and mushrooms in this formula may give you a decent boost in energy, stamina, endurance, immunity, and recovery. And it’s possible that this formula may support overall health, such as for brain and heart health.

Just don’t expect any huge boosts in any of these areas. This could happen, but I just can’t guarantee it.

Overall, though, it seems like a pretty effective formula.

Who is Moon Juice Power Dust Best For?

Moon Juice Power Dust is best for people who are looking for an adaptogenic formula to increase their resistance to stress and improve overall energy, health, and vitality.

It also is a possible alternative for people looking to come off of unnatural energy-boosters, such as various energy drinks.

Plus, it is caffeine-free, so it is a good energizing option for people sensitive to caffeine.

Possible side effects of Moon Juice Power Dust are:

All ingredients are carefully sourced from their native regions and are harvested at their peak season and potency.

They also work with herbalists and doctors to determine the most appropriate type of extract for each ingredient.

Also, Moon Juice Power Dust is vegan, gluten-free, non-GMO, and caffeine-free. And it is specifically tested for heavy metals, mycotoxins, microbes, and pesticides.

It is made in GMP-certified, FDA-approved facilities.

Moon Juice states that Power Dust has a bright and earthy flavor. And it pairs well with citrus juice, tea, milk, or coffee. Or, you can add it to a smoothie.

The serving size is one teaspoon. So, just mix that in with your liquid or smoothie of choice.

You could also do what they call a “power shot”; mix one teaspoon of Power Dust into a shot-sized glass of water and throw it down.

They don’t say how many servings are in a container. But based on the total weight of the container (1.5oz/42.5g) and the serving size (1tsp/3g), there seem to be 14 servings.

You also get free shipping in the US with the Subscribe option.

This is a pretty expensive product, but still not too bad since it contains many different ingredients. Although, it’d be better if they upped the dosage a little bit and showed the dose for each ingredient to completely justify this price.

They currently ship to the US, Canada, and France.

They have a 30-Day 100% Satisfaction Guaranteed policy. So, if you’re unsatisfied, let them know within 30 days of your order, and you can return it for a refund.

That wraps up this Moon Juice Power Dust review.

Moon Juice Power Dust definitely seems like a powerful adaptogenic supplement. I like the inclusion of many well-researched herbal compounds, many of which are organic. And all ingredients are sourced from quality areas and well-tested.

The only thing I don’t like is the use of a proprietary blend. But given that the dosage of the total blend is still somewhat high, and that the ingredients are high-quality, it is still likely an effective adaptogen/herbal supplement.

Dust X Review – Is This Supplement From Blackstone Labs Worth It?

Oceans Alive Review – A Look At This Phytoplankton Supplement

Beyond Raw LIT Pre-Workout Review – Is This Supplement Effective?

Prime Male Review – A Look At This Natural Testosterone Booster