BPN In Focus Review – Is This Nootropic Right For You? 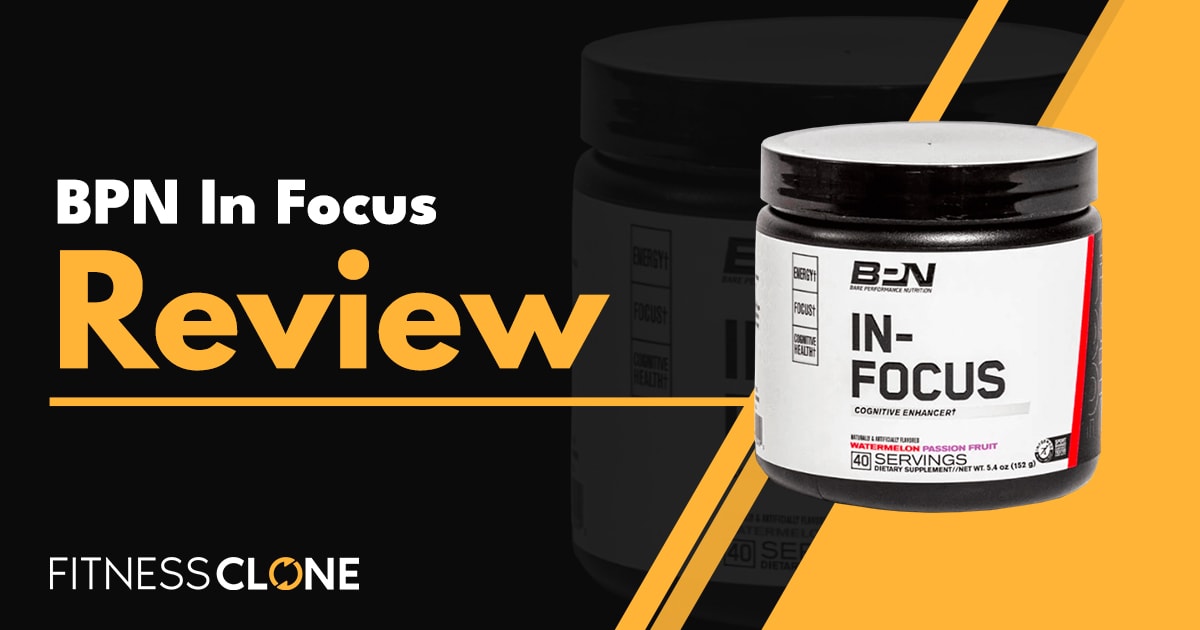 Whether you’re at work, at school, or in the gym, you can always benefit from some extra focus and energy.

After all, with more focus and energy, you can be more efficient, and productive, and simply enjoy things more too.

To get this boost, many people turn to the classic 5-hour energy shots, Red bulls, or other store-bought energy drinks. And then, of course, there’s coffee.

But with the exception of coffee, these drinks are really unhealthy as they’re usually loaded with too much sugar, fake ingredients, and caffeine.

Luckily, there are a number of more natural energy supplements coming out to clash against this trend, including one supplement called In Focus by BPN.

Continue reading this BPN In Focus review if you want to learn more about this supplement, the focus-enhancing ingredients it has, and whether or not we recommend it as a focus/energy supplement.

About BPN In Focus

BPN In focus is a cognitive enhancing supplement created by Bare Performance Nutrition (BPN), the same makers as other well-known supplements such as BPN Peak Sleep, BPN Strong Reds, and BPN Strong Greens.

In Focus is loaded with critical brain nutrients to optimize neurotransmitter functioning and overall mood, energy, and cognitive function.

Some of the ingredients are well-known trademarks, including Neurofactor, AlphaSize, and Dynamine. And they also have some energy classics like caffeine anhydrous.

All in all, BPN IN Focus is designed to deliver the perfect balance of energy and focus, with all-natural and healthy ingredients much better than those seen in typical energy drinks.

The primary benefits of BPN In Focus are:

BPN In Focus claims to have clinically researched ingredients for amplifying energy and focus and optimizing key neurotransmitters, such as caffeine anhydrous, dynamine, and tyrosine.

Another promoted benefit of BPN In Focus is boosted productivity. Some of the ingredients in BPN Focus, such as AlphaSize and caffeine, are designed to improve alertness, promote mental clarity, and decrease mental fatigue, for a 3-in-1

Along with short-term cognitive benefits, BPN In Focus is also advertised to deliver longer-term benefits for learning and memory by boosting acetylcholine and other neurotransmitters, especially with ingredients such as AlphaSize and NeuroFactor.

These are all some benefits that many people could use on a daily basis. But will BPN In Focus actually work as a cognitive enhancer? Read on to find out!

BPN In Focus contains a handful of different amino acids, herbal extracts, and other compounds. The active ingredients in it are:

We’ll start off with their 3 trademarked ingredients, and then go into the rest.

The first trademarked ingredient is AlphaSize, which is a form of alpha-GPC, a type of choline compound.

AlphaSize is a highly bioavailable form of choline, which is a precursor to acetylcholine, a neurotransmitter involved in learning, memory, and focus, as well as physical functions too, such as strength.

That’s why you can find it in nootropics and pre-workouts alike, such as Roman Focus and Pre JYM.

For the most part, alpha-GPC in general has been shown to improve aspects of learning, memory, and cognitive function in Alzheimer’s and dementia patients, but there isn’t really a lot of research in healthy people.

One study on Alpha-GPC found that improved aspects of cognition related to video game performance, and some others showed better cognition trends, but more research is needed.

The next ingredient is Dynamine, a trademarked form of methylliberine. Methylliberine is a compound found naturally in coffee beans, tea, cola nuts, guarana, and other foods.

Methylberine has been found to increase the half-life and decrease the oral clearance of caffeine, which can help to prolong caffeine’s stimulatory effects.

Its often used in pre-workout supplements too for this reason, including Yeah Buddy.

Plus, methylberine has its own stimulatory effects, with some research showing that Dynamine (along with caffeine and TeaCrine) can improve working memory, alertness, reaction time, processing speed, and other aspects of cognition.

The third trademarked ingredient in BPN In Focus is NeuroFactor, which is a form of coffee fruit extract.

Coffee fruit extract is rich in polyphenols, which are able to offer a number of benefits, including neuronal health and cognitive function.

Research on NeuroFactor and other whole coffee fruit extracts has shown that it can increase brain-derived neurotrophic factor (BDNF), which is important for learning, memory, and other cognitive functions. BDNF is necessary for neuronal health and neurotransmitter function, among other things too.

L-tyrosine (tyrosine) is an amino acid and an essential component for the production of some neurotransmitters, including dopamine and norepinephrine.

That’s why it’s likely most effective when people are under stress since stress depletes dopamine and norepinephrine.

Caffeine is many people’s stimulant of choice. This compound can inhibit adenosine production while also boosting dopamine, norepinephrine, and serotonin, which can lead to improved alertness, energy, mood, and motivation.

Plus, as we saw earlier, caffeine’s effects are increased when combined with methylberine.

The final ingredient in BPN In Focus is muruna pruriens extract. Mucuna pruriens, also known as velvet bean, has significant antioxidant and neuroprotective effects. Plus, it is rich in l-dopa, a precursor to the neurotransmitter dopamine. Mucuna pruriens and l-dopa are effective in treating Parkinson’s, and it may also help to improve memory and cognitive function.

Does BPN In Focus Work?

I’ll tell you what: It looks like we have a pretty solid cognitive supplement on our hands here.

BPN In Focus has clinically proven ingredients known to enhance memory, learning, attention, focus, and other aspects of cognition.

On top of that, they use the right dosages for most of the ingredients. You’re getting a great dose of tyrosine, caffeine, Dynamine, and NeuroFactor, along with a decent dose of AlphaSize.

The only ingredient that should be dosed quite a bit higher is mucuna pruriens, but the included dose should probably do something.

Another thing to consider is that there aren’t a whole lot of research studies out there on some of these ingredients, including the patents. But the ones that are out there DO show positive results. And they’re all well-known compounds too, so this is overall a solid product.

So, let’s take a look at how well BPN In Focus will work for focus, energy, learning, memory, and productivity.

The most likely benefits you’ll get are for energy, alertness, and mood, especially due to the Dynamine/caffeine combo.

And you should also get a decent improvement in learning and memory, especially with NeuroFactor, although this will take a while to develop (likely a few weeks).

BPN claims that AlphaSize is good for memory too, but there really isn’t the research there to support it.

Overall, BPN In Focus should be a nice supplement to give you that extra edge when you need a little more focus, energy, motivation, and performance. Just don’t expect it to give you endless energy or bump up your cognitive performance to a genius.

Who is it Best For?

BPN In Focus is best for people who want a natural energy and focus supplement to improve cognitive performance and help them power through their day a little easier. It’s likely a good choice for people with a demanding work or school schedule, and anyone who uses up a lot of “brainpower” on a daily basis.

That said, the product contains caffeine, so those who are sensitive to caffeine (or prefer to get it from another source) may prefer a caffeine-free cognitive enhancer like Mind Lab Pro or Onnit Alpha Brain.

The side effects for BPN In Focus should likely be less harsh than that of other unnatural products, but there still are some possible effects, including:

BPN In Focus is Informed Sport certified and third-party tested for banned substances. Their products are used by many professional athletes due to their trust in the product’s safety and quality.

Where to Buy BPN In Focus

You can buy BPN In Focus on the BPN website at this product link.

This is a fantastic price, especially considering the high ingredient quality and adequate dosages; you really can’t beat this value for your money. And it costs much less per serving than some of the crappy energy drinks out there.

BPN In Focus contains a solid blend of some of the best ingredients for improving energy, focus, and overall cognitive performance. Plus, most of the dosages are right in line with the research, meaning you’ll actually get an effective product. And with a price per serving well under a dollar, BPN In Focus is a solid choice for anyone looking for a natural energy supplement.

Usana Probiotic Review – Should You Try This Popular Probiotic?

Nuun Review – How Effective Are These Hydration Tablets?

QardioArm Review: A Look at This Wireless Blood Pressure Monitor

Chemix Pre-Workout Review – How Does It Compare?

Hunter Test Review – Will This Testosterone Booster Work For You?