Four Sigmatic Focus Review – Is This Nootropic A Top Choice? 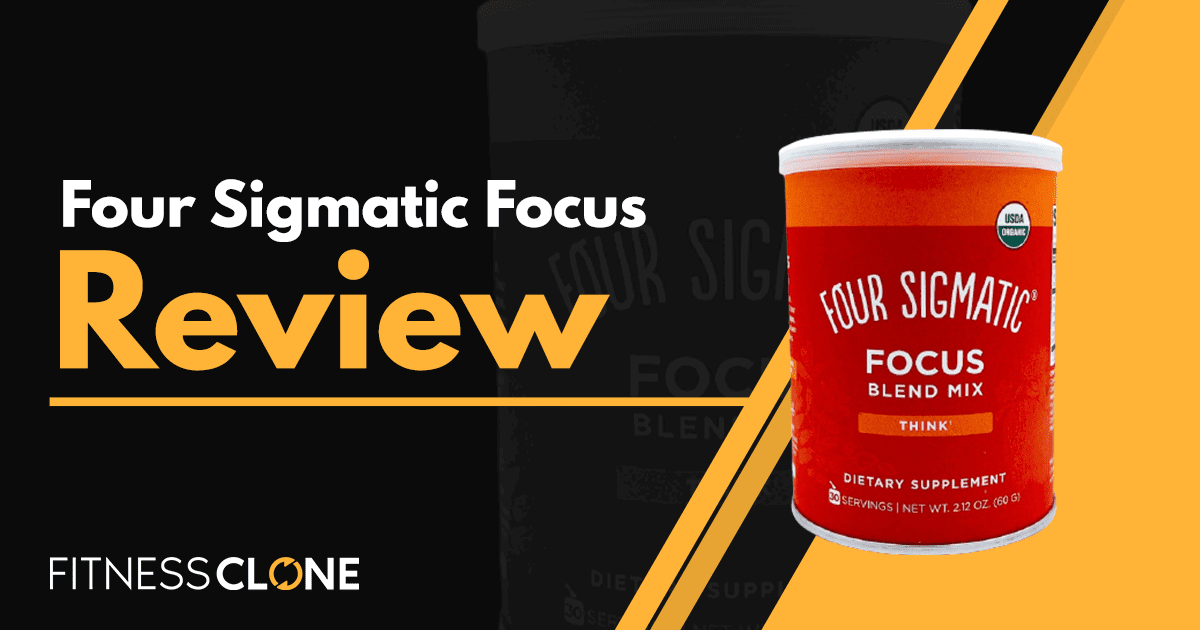 When you wake up in the morning, do you feel ready to take on whatever the day has planned for you? Are you constantly feeling burned out by the time lunch hits? Do you feel like you don’t have enough energy to get you through the evening? Do you feel depleted throughout the day?

Don’t worry; you’re not alone. Millions of people around the world experience a lack of energy, focus, and motivation on a daily basis. And while most of those people turn to a cup of coffee as a pick-me-up, it often doesn’t do the trick — which is why they turn to several cups of coffee.

The truth is coffee isn’t a magic solution that solves all your problems — despite what some people might say. It gives you a little boost, but it’s often coupled with a crash and unwanted side effects later on. And when you rely on another cup of joe to combat that, it only gets worse.

What if you didn’t have to rely on coffee and large amounts of caffeine throughout the day? What if there was a powdered blend of ingredients that gave you the energy, focus, and motivation you needed? Better yet, what if you could add that powder to any drink you’d like — including coffee?

What Is Four Sigmatic Focus?

Four Sigmatic Focus Blend is a powdered blend of organic ingredients that’s designed to increase your focus, drive, energy, mood, and creativity. It’s caffeine-free, plant-based, sugar-free, and completely safe and effective to use on a daily basis. You can even use it several times per day, if needed.

This extremely popular powdered solution is brought to you by Four Sigmatic, one of our favorite supplement companies today. They began their journey in Finland, but have since relocated to the United States to introduce us to a new wave of supplements.

Four Sigmatic is heavily committed to providing high-quality supplements that taste good, are rigorously lab-tested, safe to consume, and healthy for the body. Although they use a variety of unique ingredients, they largely focus on the wonderful benefits of functional mushrooms.

And that’s exactly what you get with Four Sigmatic Focus. It’s a mixture of nootropics, vitamins, and functional mushrooms that you can easily add to any beverage of your choosing. In fact, you can add this powdered blend to your favorite baked goods, if you’re feeling a little extra.

Four Sigmatic Focus contains seven ingredients that combine to form one of the best powdered solutions to your energy-ridden, unfocused, unmotivated, and memory-deprived mornings. Without the caffeine, it’s something you can continue to turn to throughout the day.

The seven ingredients that make up the Four Sigmatic Focus Blend are Lion’s Mane Mushroom, Cordyceps Mushroom, Bacopa Monnieri, Rhodiola Rosea, Blueberry, Cacao Powder, and Vitamin B12. Together, they give your body and brain what they need to perform their best each day.

Let’s take a closer look at each ingredient.

Source: also known as hou tou gu or yamabushitake, a white functional mushroom that resembles a lion’s mane or weeping willow tree, grows on decaying trees in the northern United States and Canada

Side Effects: non-toxic and generally regarded as safe, should avoid if allergic to mushrooms

Source: a unique functional mushroom that grows on the larvae of insects, largely found in Asia, grow best in humid and tropical climates, a staple in traditional Chinese medicine

Side Effects: non-toxic and generally regarded as safe, should avoid if allergic to mushrooms

Side Effects: can cause nausea, cramps, diarrhea, and other digestive problems when taken in high amounts, should avoid if pregnant

Side Effects: non-toxic and generally regarded as safe

Source: derived from cold-pressed raw cacao beans, been used for hundreds of years, dating back to the 16th century when Spanish conquerors introduced cacao beans to Europe

Side Effects: generally regarded as safe

Source: a berry that grows on a shrub, best grown in areas that receive a lot of sun, most of the blueberries in the US are grown in Washington, Oregon, Michigan, and Georgia

Side Effects: generally regarded as safe

Source: also known as cobalamin, a member of the group of B-complex vitamins, an essential vitamin that’s commonly found in animal products

The Four Sigmatic Focus Blend packaging is extremely simple and resembles the cylinder container you get when you buy oats, just smaller. The label features different shades of orange with white lettering. On the front of the packaging, it emphasizes the word ‘Think,’ which is definitely fitting.

All the ingredients and their dosages are clearly listed on the back of the label. Here’s a quick look at the dosage of each ingredient:

Four Sigmatic Focus can be purchased directly on the Four Sigmatic official website here. Each tub contains 30 servings, which lasts you a full month when taking one serving per day. Each serving is one scoop of powder, and one scoop is equal to 2 grams. You can purchase one tub for $30, which comes out to just $1.00 per serving — which isn’t bad compared to others. 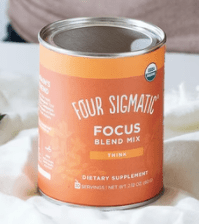 Supplements are always a tough sell, no matter what type of supplement you’re interested in or what ingredients that supplement contains. Even high-quality formulas like Four Sigmatic Focus Blend aren’t perfect and come with a variety of pros and cons that must be considered before purchasing.

Don’t worry; we’re going to break down everything you need to know about Four Sigmatic Focus in an easy-to-read pros vs. cons list. Overall, it’s a quality supplement that blows away its competitors, but we’ll list out everything we like and everything we don’t like about the formula.

Four Sigmatic is known for their high-quality formulas, and things are no different with Four Sigmatic Focus Blend. It’s one of their most popular powdered blends in their repertoire, and it’s no surprise why. It’s a simple formula with seven ingredients that are all backed by science and research.

The blueberry, Mucuna Pruriens, and Vitamin B12 are just icing on the cake — helping to increase energy and improve overall health with the addition of antioxidants. Of course, you can’t forget about the cacao powder, which adds flavor and a variety of health benefits, as well.

Overall, there isn’t much to complain about with this formula. It gives your body and brain everything it needs and nothing it doesn’t, which is hard to find in a supplement these days.

There are a lot of supplements out there that claim to improve focus, memory, energy, mood, and overall brain health — Four Sigmatic Focus isn’t alone in that category. With that said, Four Sigmatic Focus Blend is certainly one of the best out there, and you aren’t going to find many that can compete with it.

The use of functional mushrooms is something many supplement companies aren’t committed to — at least not like Four Sigmatic is. That’s what makes the combination of Cordyceps and Lion’s Mane so unique; most people aren’t taking advantage of the benefits they provide.

Bacopa Monnieri and Rhodiola Rosea are utilized by most supplement companies, but they aren’t often combined with the functional mushrooms listed above. That’s why we recommend this powdered supplement to anyone that drinks a smoothie or coffee to start the day.

With that said, not everyone is interested in a powdered supplement. If this sounds like you, then you might benefit from a capsule supplement. Don’t worry; Mind Lab Pro is a similar formula that’s available in capsule form. While not made by Four Sigmatic, it’s just as good quality-wise.

We’re impressed by what Four Sigmatic is able to produce — Four Sigmatic Focus Blend included. It’s a simple formula that contains the right ingredients and avoids anything unnecessary. Although it has focus in its name, it’ll also help improve your memory, mood, energy, and overall brain health.

If you’re interested in getting more out of what Four Sigmatic has in store, Four Sigmatic Focus Blend is safe to take in conjunction with the rest of their formulas. They have quite a wide selection, including adaptogen shots, a Chaga Elixir, Ground Mushroom Coffee, Mushroom Cacao Mix, a 10 Mushroom Blend supplement, and other unique mushroom blends.

Nootropics are unique supplements that are designed to improve cognitive function in a variety of ways. For example, the five main ways they improve brain function include memory, focus, energy, mood, and brain health. Depending on the formula, they’re designed for daily support.

Most nootropics today use a combination of vitamins, herbal extracts, amino acids, functional mushrooms, plants, and other nutrients backed by science. A majority of the ingredients are rooted in traditional Ayurvedic and Chinese medicine, dating back thousands of years.

What are functional mushrooms?

Functional mushrooms are specific species of mushrooms found in the wild. They’re not your typical ‘white button’ or ‘portobello’ mushrooms you find in the grocery store — and they’re not the Psilocybin mushrooms that have psychedelic effects on the brain when consumed.

How do you take Four Sigmatic Focus?

Four Sigmatic Focus Blend is extremely easy to add to your daily routine. Since it’s in powdered form, all you need to do is add one scoop to the beverage of your choice. Many people like to add it to their coffee, which is safe since it’s caffeine-free. The ingredients enhance the benefits of coffee.

If you don’t drink coffee, you can add the powder to a smoothie or simply add it to water. If you like to bake, then you can add it to your favorite baked goods, whether that be pancakes, waffles, cookies, brownies, or anything else you’re baking on that particular day.

When most people hear the term mushrooms, they’re either super intrigued or immediately disgusted. Those that are super intrigued will find instant pleasure in functional mushrooms and might even be interested in cooking with them — in addition to supplements.

Those that are disgusted by mushrooms can rest easy knowing that Four Sigmatic Focus Blend — along with all of Four Sigmatic’s formulas — won’t taste like mushrooms. Instead, they generally have a coffee or cocoa taste. It’s a little earthy, but it’s nothing that will make you gag or hate it.

Après Review – Does This Protein Shake Live up to Expectations?

Blue Star Status Review – Is This Testosterone Booster Worth Using?

Teami Tea Review – Are These “Skinny Teas” Worth the Money?