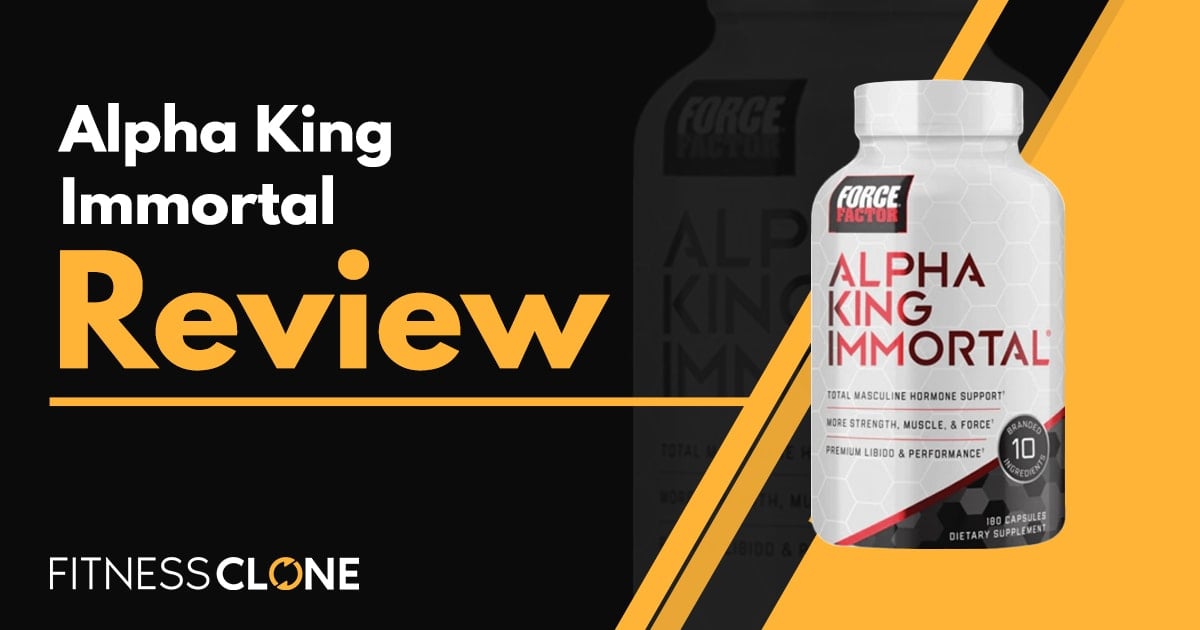 Immortality is a trivial pursuit, but that doesn’t stop many people (especially men) from trying to become as dominant and powerful as they can with their time here.

Men have always been intrigued by status, power, and dominance, and did you know that there’s even a hormone involved with these things? It’s called testosterone.

Testosterone and other hormones are what make men, men, so optimizing these hormones can do wonders for overall male health.

And in this review, we’ll take a look at a loaded supplement called Alpha King Immortal. We’ll discuss this supplement’s ingredients, claims, benefits, and more to see if it’s really worth taking.

Alpha King Immortal is made by Force Factor, a company with many supplements including LeanFire, TestX180, ProbioSlim, Leanfire XT, LeanFire PM, Forebrain, and their original Alpha King supplement.

Force Factor’s Alpha King Immortal is designed to be an even better and more potent male hormonal booster by optimizing levels of 3 key hormones: testosterone, estrogen, and growth hormone.

Specifically, Alpha King Immortal is designed to increase testosterone and growth hormone while lowering estrogen, in turn giving men an ultimate formula to help them live their lives to the fullest and rise above.

It is featured by many trademarked ingredients, including KSM-66, AlphaFen, PrimaVie, OptiZinc, and AlphaSize, just to name a few.

It may not give you immortality, but Force Factor designed this product for men who want to live a full, dominant life, lending the possibility that you’ll be remembered long after you’re gone. And who wouldn’t want that?

Alpha King Immortal is advertised to deliver the following benefits for men:

Alpha King Immortal is advertised to help optimize growth hormone, testosterone, and estrogen in men with its many different ingredients, a lot of which are scientifically researched and patented, such as KSM-66 Ashwagandha and AlphaFen.

Alpha King Immortal is also designed to improve many aspects of workout performance, including energy, muscle, and strength. It includes ingredients designed to bolster HGH during workouts, such as Nitrosigine, as well as ingredients for overall strength and power, including PrimaVie shilajit and KSM-66 ashwagandha.

Lastly, Alpha King Immortal is touted to enhance libido and all aspects of sexual performance with its many aphrodisiac ingredients, such as AlphaFen, Tongkat Ali, and OptiZinc.

Do we have your attention yet, men? If so, continue reading this Alpha King Immortal review to see if truly can help optimize your masculine hormones, health, and performance.

The key ingredients in Alpha King Immortal are:

As you can see, Alpha King Immortal contains a number of different matrices, complexes, and blends, but it’s good to see that every single ingredient has a listed dosage, so you know what you’re getting. Now, let’s dive in to see the potential benefits these ingredients may have!

One of the key players in Alpha King Immortal, KSM-66 is a trademarked form of the powerful adaptogenic herb known as ashwagandha.

KSM-66 Ashwagandha is most well-known for its ability to reduce stress, anxiety, and cortisol, which can in turn lead to more bioavailable testosterone. It appears to be able to increase testosterone, improve muscle size and strength, delay fatigue, and even improve recovery.

It’s no wonder it’s one of the most sought-after herbs for men, and consequently, found in many male performance supplements, including MDrive Elite Performance.

AlphaFen is a trademarked form of fenugreek extract, another herb that has positive effects on hormones. Fenugreek has glycosides in it that have androgenic and anabolic effects.

Plus, fenugreek can inhibit 5-alpha reductase enzyme, which an enzyme that converts testosterone to estrogen. So inhibiting this enzyme leads to more freely available testosterone and less of that feminine estrogen stuff (you still need it…just not too much).

The research overall supports the ability of fenugreek to increase testosterone levels in men and aid physical function.

PrimaVie is a trademarked form of shilajit extract. It’s also found in other t-boosters such as Nugenix Total T Maxx.

Shilajit is a sticky substance found primarily in the rocks of the Himalayas. It is formed over centuries by gradual decomposition of plants and other matter, and is rich in many compounds, such as fulvic acid and minerals.

Shilajit has been shown to increase total T, free testosterone, and DHEA, while also enhancing muscular strength and endurance during exercise.

Tongkat ali is also a well-known aphrodisiac, with many health-boosting compounds, including quassinoids. It helps to release testosterone from sex-hormone binding globulin, allowing more bioavailable T to circulate.

Research has shown that tongkat ali can increase total and free testosterone while also improving sex drive, energy, and mood.

It is also found in so many T-boosters, such as Black Ox Test Booster.

Tribulus terrestris is another herbal compound thought to increase testosterone levels, although it doesn’t have as much research. It seems more effective for enhancing nitric oxide levels which could improve blood flow and erectile function.

Stinging nettle and Diindolylmethane (DIM) are both able to inhibit SHBG, aromatase, and 5-alpha reductase, which can lead to decreased estrogen and more freely available testosterone.

Nitrosigine is a trademarked form of inositol-stabilized arginine silicate, so it’s a form of arginine.

It has been proven to raise blood arginine levels, which can increase nitric oxide levels and improve blood flow. This may make it effective for enhancing exercise performance and sexual function too. And it’s also why you can find it in many pre-workouts, including NO2 Black.

AlphaSize is a trademarked form of alpha-GPC, which is a type of choline compound. Alpha-gpc may be able to increase acetylcholine levels, which is a neurotransmitter important for focus and even muscular contractions.

However, the AlphaSize studies as of yet don’t show conclusive benefits, even though it still may give some people a boost.

Spectra is a trademarked mixture of 29 different fruits, vegetables, and herbs. It has been clinically proven to reduce free radicals and oxidative stress, while also optimizing cellular metabolism.

AstraGin is a trademarked form of astralagus root extract and panax ginseng extract.

AstraGin and its compounds have been shown to increase the body’s ability to absorb numerous nutrients, including amino acids, vitamins, and phytonutrients. This ultimately increases the effects they can have in the body.

Plus, AstraGin can increase arginine and citrulline absorption, which helps the body’s ability to produce HGH.

BioPerine is a trademarked form of black pepper extract. It is similar to AstraGin in that it can also increase the bioavailability of many different nutrients, helping you to get the most out of the active ingredients.

OptiZinc is a trademarked form of zinc monomethionine. Zinc is a trace mineral critically involved in testosterone synthesis and production. In fact, zinc deficiencies are tightly related with low testosterone.

And zinc supplementation can help restore testosterone levels and may even improve strength, muscle, and recovery in athletes.

Plus, the OptiZinc form has a high bioavailability.

Lalmin Se1000 is a trademarked form of seleniumas selenomethionine. Selenium is an important trace mineral that is able to offer potent antioxidant effects. It may be able to protect against stress from exercise, helping athletes to recover. Plus, selenium is needed for optimal testosterone and hormonal production.

Alpha King Immortal really looks like it should be an effective male hormone and performance enhancer.

It highlights a bunch of different well-researched, trademarked ingredients, all proven to enhance testosterone, strength, endurance, energy, recovery, growth hormone, and/or blood flow. So, you’re getting quite a wide array of beneficial ingredients.

And more importantly, nearly every ingredient is dosed within clinically effective ranges; something that doesn’t happen very often with t-boosters.

But with Alpha King Immortal, you’re getting at least a solid dose of literally every important ingredient. You have a top-end dose of KSM-66 ashwagandha; a high dose of AlphaFen fenugreek and tongkat ali; and solid doses of Nitrosigine and OptiZinc; just to name a few.

Now, there aren’t any ingredients in here that directly boost HGH, but the blood-flow-enhancing effects of Nitrosigine and other ingredients likely accomplish this.

So, overall, Alpha King Immortal is a solid product backed by research and well-dosed. A sort of anomaly in the world of t-boosters, but at least that’s getting better over time.

Recall that AlphaKing is advertised to optimize hormones, give you greater energy, strength, and muscle, and improve libido and sexual performance.

All in all, Alpha King Immortal should be able to at least support all of these areas, but we have to be realistic.

It’s not guaranteed that Alpha King Immortal will give you optimal levels of testosterone, estrogen, and growth hormone, although it definitely should balance these hormones to better levels.

And you should see improved energy, strength, and muscle since many of the ingredients have anabolic and performance-enhancing effects. But just think of these effects as maybe the extra 5 to 10% you’re looking for; not double the performance or something crazy.

The same can be said of libido and sexual performance; don’t expect Alpha King Immortal to turn you into a god in the bedroom. But it should help increase desire, libido, and overall performance a bit, ESPECIALLY if you have suboptimal/low T levels, to begin with.

Young, strappin’ guys in your 20s…you probably won’t see much of a difference since your T levels are (hopefully) already high.

Who is Alpha King Immortal Best For?

Alpha King Immortal is best for any man looking to enhance his male hormonal profile and get a little extra edge in the weight room and bedroom. Men with the “highest risk” for suboptimal hormones are most likely to benefit, including high-intensity athletes, chronically stressed men, and older men.

There are a ton of ingredients in Alpha King Immortal, so there’s always a possibility of side effects. Some possible ones include, but aren’t limited to:

Alpha King Immortal is made in the USA in a GMP-certified facility.

It does contain milk, although there is no other allergen information listed.

Where to Buy Alpha King Immortal

You can buy Alpha King Immortal at a number of online retailers, including Amazon, GNC, The Vitamin Shoppe, and Lucky Vitamin.

This sort of makes sense given the amount of high-quality, well-dosed ingredients, but the high price tag still might be too much for some people.

They also have a money-back guarantee, but it’s unclear what the specifics are.

Alpha King Immortal is certainly one of the better t-boosters and male performance supplements out there today. It has a really high ingredient quality, with most of the effective ingredients at solid dosages. So, even despite the high price, we think it’s worth trying out for those men who want to try to maximize male performance as much as possible.

Apothekary Stop Your Wine-Ing Review – Is This Supplement Effective?

Verso Cell Being Review – Should You Buy This Anti-Aging Supplement?