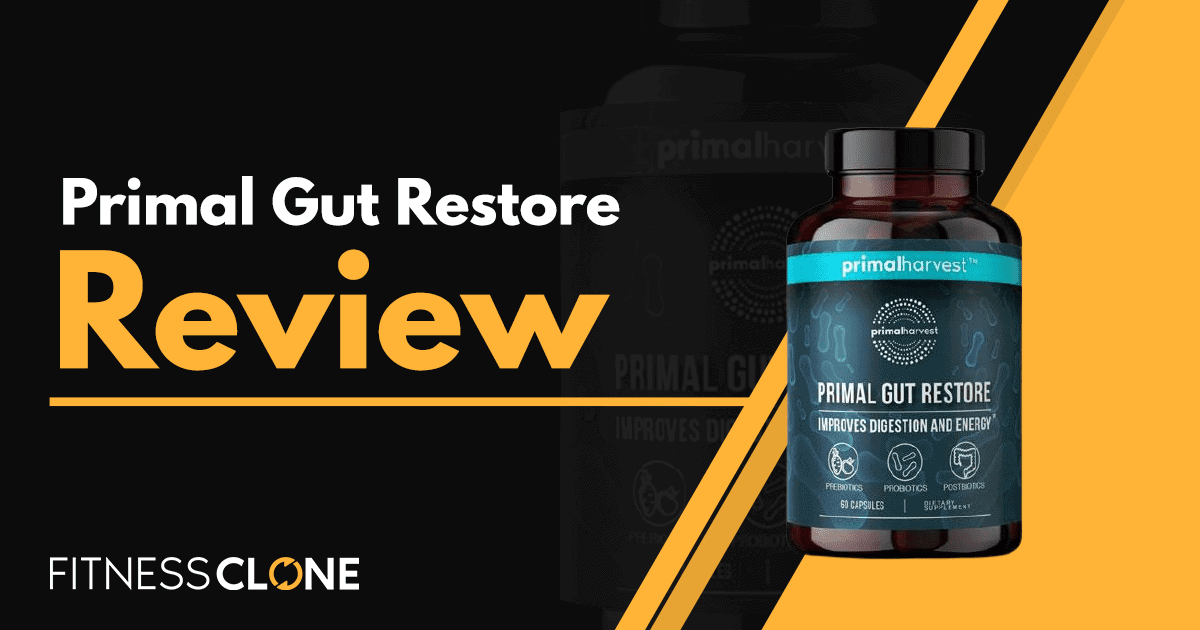 Scientists and consumers alike are starting to realize the importance of gut health in many different aspects of our lives. That’s why gut health supplements have become so prominent.

The issue is, with so many different supplements on the market touting exotic claims, it can be challenging to find a high-quality, well-rounded gut health supplement that is researched-backed. Not to mention, no one wants to be taking a myriad of pills each morning.

Because of all these reasons, many people are starting to look at Primal Harvest’s Primal Gut Restore.

With probiotics, prebiotics, and postbiotics in 2 tiny capsules a day, this supplement seems too good to be true. But is it? Keep reading our Primal Gut Restore review to find out!

Marketed as the ultimate gut restore product, Primal Harvest’s Primal Gut Restore is a prebiotic, probiotic, and postbiotic supplement all wrapped in one.

The supplement contains B. longum BB536 for digestion and regularity and CoreBiome Tributyrin for a strong gut barrier. These ingredients serve as the foundation for the complete gut health formula (more on this later).

First, let’s take a look at the company behind the supplement.

Founded in 2018 by Dan Harper in Farmingdale, New York, Primal Harvest boasts “complete ingredient transparency” in their products. Their website claims their supplement ingredients are based on scientific research and standardized clinical studies.

In addition to Primal Gut Restore, Primal Harvest has produced a wide variety of supplements, including Primal Flex, Primal Greens, Primal Harvest Multivitamin, and Primal Harvest Collagen. All Primal Harvest products are made in the United States and are Good Manufacturing Practices (GMP) certified in Food and Drug Administration (FDA) approved facilities.

Primal Harvest markets a holistic philosophy, encouraging supplements over pharmaceuticals as a way of aiding in and maintaining health.

Our digestive system contains a vast number of microbes that function to maintain our health. Prebiotics are nutrients broken down and selectively fermented by probiotics, sometimes referred to as probiotic’s food, which assists in creating a healthy colony of bacteria in our gut [1].

Food sources of prebiotics are primarily classified as soluble fibers and can be found in foods such as soybeans, inulin (which is found in bananas and Jerusalem artichokes), jicama and chicory root, raw oats, unrefined wheat and barley, garlic, onions, and cooked whole wheat flour [1].

Prebiotics provide a plethora of benefits. Prebiotics are believed to inhibiting certain strains of bad bacteria and preventing diarrhea. Prebiotics are also believed to provide numerous health benefits such as anti-cancer and anti-allergic effects, increased mineral absorption, and many others that continue to be studied. Further research remains warranted on their health effects in supplement form with human trials [1].

The microbes in our digestive system consist of bacteria, fungi, and other microorganisms known as probiotics. In a healthy person, probiotics would exert positive functions such as aiding in metabolism and protecting us from pathogenic organisms.

With a wide spectrum of potential health benefits, probiotics are still being extensively studied for their use in human health. Despite significant evidence in their favor, probiotics remain controversial due to the limited research available on their mechanism of action. With a vast variety of different strains that all appear to function differently in the gut, further research is needed to fully understand their role and how we can best utilize them for health purposes [2].

Postbiotics is a relatively new term in the science world; however, researchers have been studying postbiotics and their potential health effects for numerous years. Postbiotics are the result of probiotics feeding on prebiotics. In a healthy gut, the body would produce Tributyrin, a microbial metabolite that is now being marketed as a functional food or supplement on its own [3].

Many consumers reported decreased digestive concerns and smoother digestion, increased energy, improved mood, skin, and general wellbeing. With 4.9 out of 5-star reviews on their website, it appears many Primal Harvest consumers feel this supplement is a beneficial addition to their health regimen.

Primal Harvest’s Primal Gut Restore claims to support gut health, natural immune responses, and energy levels. Numerous research studies conducted on prebiotics, probiotics, and postbiotics favor these claims; however, there is further research needed on these supplements and their potential benefits and safety of use.

Primal Gut Restore contains 100mg of the prebiotics xylooligosaccharides, a type of non-digestible fiber that helps to stimulate prebiotic Bifidobacterium and other lactic acid bacteria in the gut and is believed to provide a plethora of health benefits.

Claimed by Primal Harvest to help ward off cravings and help you feel full longer, xylooligosaccharides act as most fibers in the role of satiety. Considered a functional fiber along with a prebiotic, xylooligosaccharides have also been shown in some research studies to exert anti-inflammatory, antioxidant, and anti-allergy effects that are believed to improve immunity, decrease cancer risk, and lower cholesterol levels [5,6].

Primal Gut Restore contains 3 billion CFU of the probiotic Bifidobacterium Longum BB536 for digestion and regularity. This probiotic strain is known to be more stable with a longer shelf life than other probiotic strains.

Clinically effective and well-established, this probiotic strain is a multifunctional probiotic shown to exert many positive effects on human health. B. Longum BB536 has been used to help alleviate digestive, immunological, and infectious diseases. Despite strong clinical evidence, the mechanism of action for these probiotics continues to remain unclear, and further research is warranted [7].

Created by Compound Solutions with patent-pending, CoreBiome is short-chain fatty acids (SCFA) naturally produced by a healthy gut that are believed to help probiotics thrive. Most research studies are conducted on mice or piglets; more studies are needed for human trials [3,4].

Side effects reported were limited and mild in nature, including upset stomach, diarrhea, gas, and bloating.

Probiotic B. longum BB536 is generally recognized as safe (GRAS) by the FDA because these microbes naturally exist in our body. Prebiotic Xylooligosaccharides are also on the FDA GRAS list as these are commonly found in many food sources, as well as Tributyrin postbiotics if GMP are followed.

These supplements are not recommended or should be used with caution for those who have a weak or compromised immune system which can put you at risk for developing illness.

Who is Primal Gut Restore Best For?

Those looking to improve gut health or who suffer from digestive ailments such as irritable bowel syndrome, inflammatory bowel disease, or Crohn’s disease might benefit from this supplement.

Those who struggle with getting pre and probiotics in their diet might also benefit from Primal Gut Restore. 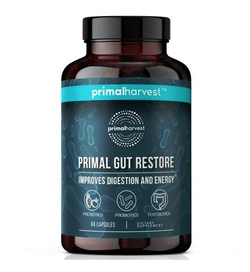 Where to Buy Primal Gut Restore

Unfortunately, this product is only available online on the Primal Harvest website, and some consumers have complained it is frequently out of stock or sold out.

Detox Organics Review – How Does This Superfood Drink Compare?

Frog Fuel Review – Is This Liquid Protein Collection Worth Using?

LOVIDIA Review – An In-Depth Look At Their Hunger Control Supplement

Total War Pre Workout Review – Is This Supplement Worth The Hype?

Gorilla Mode Review – How Effective Is This Pre-Workout?