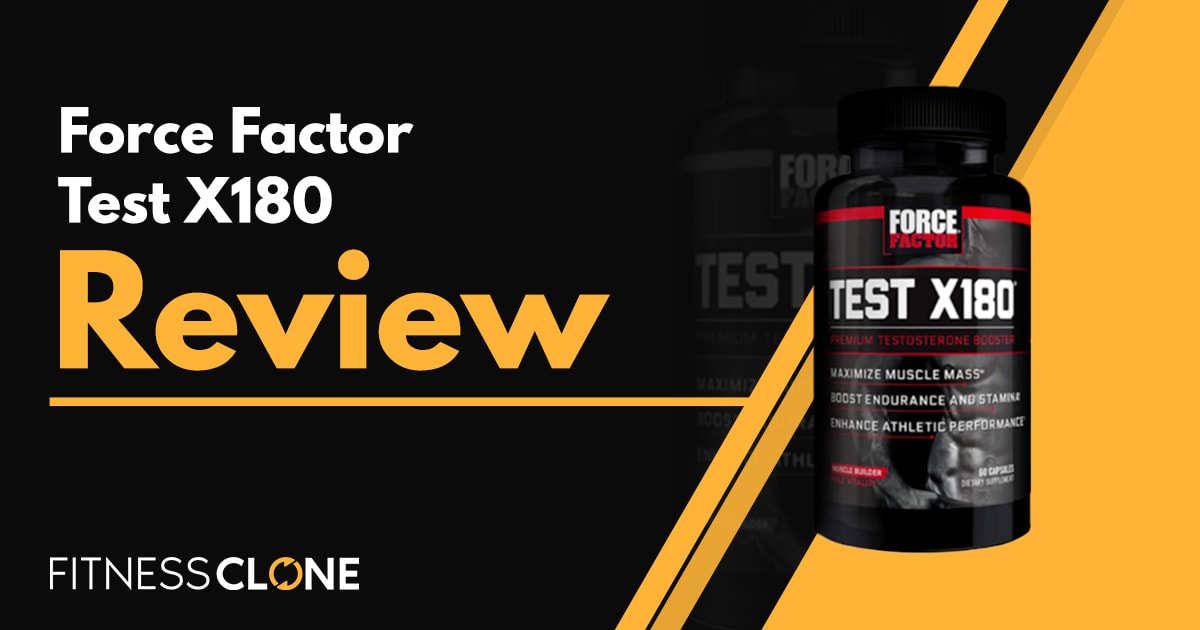 With what used to just be only a handful of supplements, there are now hundreds of different testosterone boosters on the market today. As such, you might be wondering what really makes any of the t-boosters different from each other.

And this is a fair mindset, but a closer look at the labels of various products clearly shows you that not all t-boosters are created equal. In fact, only a select few have the right combination of optimal ingredients and effective dosages. So, we’re going to take a closer look at one testosterone booster called Force Factor Test X180 to see if it can stand out from the rest.

In this Force Factor Test X180 review, we’ll discuss this testosterone booster’s ingredients, claims, benefits, pricing, and more so you can find out if it’s truly worth using. Ready? Let’s get started!

Force Factor Test X180 is a testosterone booster designed and produced by the supplement company Force Factor. You may be familiar with Force Factor as they have produced quite the variety of well-known products, including Alpha King, ProbioSlim, LeanFire, Leanfire XT, Forebrain, and (of course) Test X180.

Force Factor Test X180 is primarily designed for its physical benefits, mainly related to performance enhancement in both the gym and bedroom. Its blend of quality, research-backed ingredients is designed to skyrocket testosterone levels so you can feel like more of a man, naturally.

It is highlighted by TestoFen but also includes other ingredients, such as Tribulus, ginseng, and B-complex vitamins. All in all, Force Factor Test X180 is designed for men who want serious results in the gym and bedroom.

One of the benefits of Force Factor Test X180 is, of course, boosted testosterone. Other advertised benefits include the below:

Force Factor Test X180 is advertised to boost free testosterone, which in turn is supposed to help you build more lean muscle, so you get more out of your workouts.

There are also many ingredients in Force Factor Test X180 designed to increase energy, endurance, strength, stamina, and other aspects of physical performance. Some key players here include TestoFen, cordyceps, and ginseng.

By increasing testosterone with TestoFen, Tribulus, and other ingredients, Force Factor Test X180 is also advertised to ramp up your sex drive and libido, so you can feel like a manly man and please your lady with ease.

These are definitely some common claims made by testosterone boosters. But can Force Factor Test X180 actually live up to them? Read on to find out!

Force Factor Test X180 comes in capsule form. Below are the ingredients included in each serving (1 capsule):

The first ingredient is vitamin D, which plays roles in many aspects of hormonal health, including testosterone production. And low levels of vitamin D are associated with lower testosterone levels, so supplementation might help increase testosterone in some men, although not all research is conclusive.

Next is vitamin B6, which regulates various sex hormones, and it decrease prolactin which can increase testosterone. Plus, it has an influence on dopamine synthesis, which influences testosterone levels. But unless you’re deficient, this may not do much.

Like vitamin B6, vitamin B12 is very important in energy metabolism, and it is possibly the most important B-vitamin for brain health, particularly regarding mental energy. And B12 can often be depleted through intense exercise.

Now, let’s look at the Lean Muscle Matrix, which consists of most of the main ingredients: Testofen, Eleutherococcus, Panax ginseng, Cordyceps sinensis, and Tribulus terrestris.

Testofen is a trademarked form of fenugreek extract. Fenugreek is one of the most well-researched herbs for increasing testosterone, and its steroidal saponins are thought to be the main compounds responsible.

Specific research on Testofen has shown that it can increase free testosterone in men while also increasing strength and lean muscle mass greater than placebo when combined with resistance training. Plus, Testofen increases sexual function in healthy, aging men.

There are also two different forms of ginseng in Force Factor Test X180: Eleutherococcus (aka Siberian ginseng) and Panax ginseng.

Ginseng has a number of benefits for men, largely due to the presence of ginsenosides, which are compounds that closely resemble that of steroid hormones.

For example, research has shown that ginseng increases nitric oxide production, which can improve erections and blood flow to the muscles too. Plus, it stimulates the release of dopamine, acetylcholine, and GABA, all of which play a role in libido and achieving sexual arousal and eventual orgasm. And finally, ginsenosides may be able to stimulate the production of testosterone, as some research indicates.

Ginseng also has benefits for athletic performance too, as some studies show Siberian and Panax ginseng supplementation can delay fatigue, increase oxygen uptake, and improve stamina, strength, and endurance.

The Lean Muscle Matrix also has cordyceps, which is a type of functional mushroom. It has many different beneficial compounds, the most well-researched of those is cordycepin. Some research in rats and other animals has found that cordyceps can increase testosterone, but no human studies have seen this effect.

Also, some research shows cordyceps may be able to increase ATP production and improve energy metabolism, which is why it sometimes can have anti-fatigue effects in exercise.

The final ingredient in Force Factor Test X180 is Tribulus, which is another herb. It has been used for thousands of years due to its potential aphrodisiac activities. And while it does seem to improve blood flow, research on its ability to increase testosterone is inconsistent.

Force Factor Test X180 might increase testosterone and male performance, but I wouldn’t expect anything spectacular.

The ingredients are pretty solid, especially Testofen for testosterone and the two forms of ginseng for libido and athletic performance.

But the main concern is that most of them are combined in the Lean Muscle Matrix, which totals only 400mg. And since Testofen alone is best when dosed at 300 to 600mg, it’s clear that the dosages of the ingredients aren’t high enough to have maximal effectiveness.

However, they do recommend taking two capsules per day, which in this case brings the proprietary blend up to 800mg. We still don’t know how much of each ingredient is in there, but that definitely makes Force Factor Test X180 potentially more effective. If the lack of transparency within this formula does through you off, though, there are options out there with more transparent dosages that still include Testofen; for example, Nugenix Maxx contains 600mg of Fenugreek Extract (a form of Testofen) and Ageless Male contains 300mg.

With Force Factor Test X180, you could definitely still see a boost in testosterone, as well as slight performance increases with ingredients such as ginseng and cordyceps, but it’s not definitive.

Overall, the ingredient quality of Force Factor Test X180 is high, it’s just the lack of definitive dosages that makes it hard to tell how effective it will be.

So, when it comes to the claims, don’t expect anything miraculous here. Based on the ingredients, you should see a slight boost in testosterone as well as a little improvement in athletic performance and libido, but this might not occur in everyone.

Also, remember that you need to take 2 or more capsules if you want the full effects, especially if you’ve been dealing with low testosterone and its related effects for a while.

Upping the dose could very well turn this supplement from average at best to something pretty effective, although we still don’t know the exact amounts of the ingredients in the Lean Muscle Matrix. It’s possible to supplement with three or even four capsules, but as you increase the dosage and go against the recommendations, you increase the chance for side effects.

Who is Force Factor Test X180 Best For?

Force Factor Test X180 is primarily advertised for men who want a boost in testosterone and athletic/physical performance, so it can be a solid choice for athletes and other fitness-oriented men. It also can benefit older men and other men who have low testosterone levels. 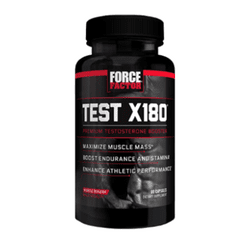 Some possible side effects of Force Factor Test X180 include:

Force Factor Test X180 is made in a c-GMP facility in the USA; it is regularly tested for ingredient quality and potency.

You can buy Force Factor Test X180 on the GNC website here.

There are 90 tablets per box of Force Factor Test X180 and a one-time purchase is priced at $64.99. GNC also offers a subscription option which gives you free shipping and 10% off, bringing the cost down to $58.49.

Hunter Focus Review – A Look At This Nootropic For Focus

Iconic Protein Drink Review – Is It Really A Healthy Choice?

Performance Lab Mind Review – Is This The Right Nootropic For Your Needs?

OmniBiotics Organic Milk Thistle Review – Do You Need This Supplement?

Moon Juice Power Dust Review – Should You Use This Supplement?