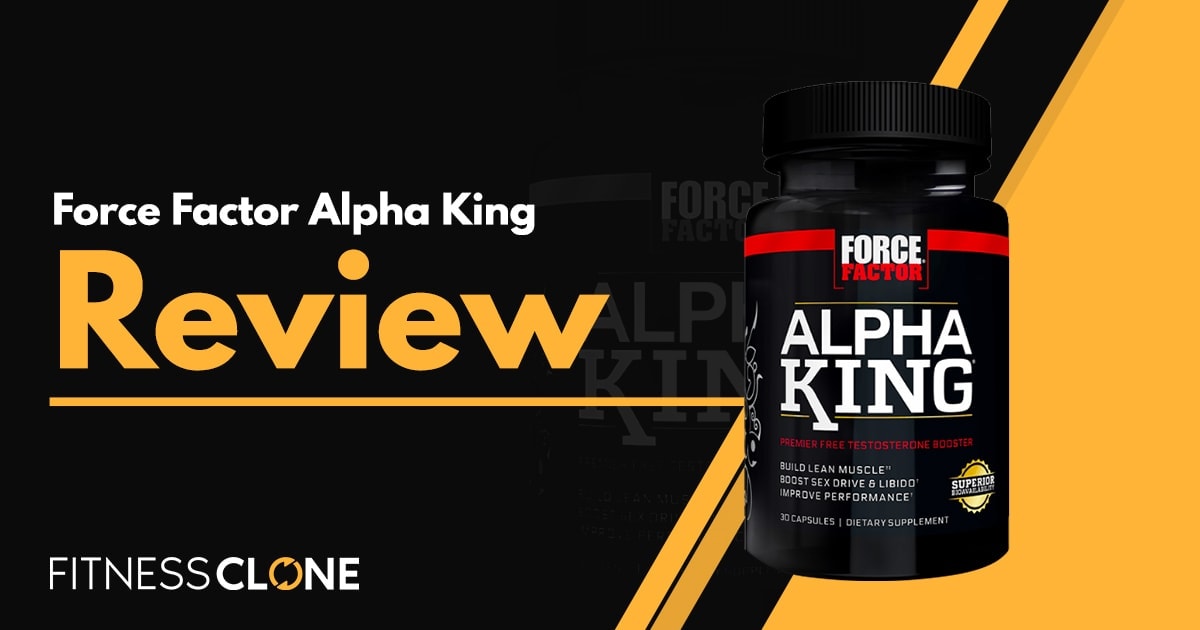 Testosterone production naturally tapers off as men get older but other factors can cause levels to drop off. Things like testicular injury, alcohol abuse, kidney disease, smoking, and poor diet can cause low testosterone levels and they can be hard to get back up to baseline levels.

So in this Force Factor Alpha King review, we’re going to take a look at this man-boosting formula to see if it can truly unleash your full manly potential…man.

Alpha King is one of the 6 testosterone boosters made by Force Factor. Alpha King comes in convenient pill form and is to be taken at least once a day with breakfast or more depending on desired effects. According to the company’s website, Alpha King will boost your sex drive, increase muscle mass gain, stimulate hair growth, and improve your mood.

Force Factor claims that Alpha King is their strongest male vitality supplement yet and is designed to ramp up testosterone levels when paired with resistance training. It is featured by a new ingredient called AlphaFen alongside some other classic t-boosters, such as black maca and Tribulus Terrestris.

Overall, Force Factor Alpha King is designed to help you experience total manliness in all areas of your life.

Alpha King is made by Force Factor, a popular creator of men’s workout supplements and nutritional supplements. Force Factor is a globally recognized brand and is used by millions of athletes, enthusiasts, fitness professionals, and more. Based out of Massachusetts, Force Factor was founded in 2009 with the goal of making performance-boosting supplements available to everyone.

Within the first few months of launching, Force Factor has become a top-selling brand at GBNC and received several industry awards. In 2018, Force Factor was named brand of the year by bodybuilding.com. They have since produced a variety of products including Alpha King, Test X180, ProbioSlim, LeanFire, Leanfire XT, and Forebrain.

Force Factor does have a BBB profile page. Unfortunately, pretty much all the reviews on the profile page are one-star negative reviews and the majority have to do with Force Factor’s billing and payment procedures. To the company’s credit, they have responded to most of the complaints and say they have issued refunds to the aggrieved customers. But the fact that those negative reviews exist in the first place is something to keep in mind.

The main driver of all of the other benefits of Alpha King is the advertised increase in free testosterone. Alpha King has certain ingredients designed to directly boost testosterone and also inhibit testosterone rivals such as estrogen.

Force Factor also claims that Alpha King will lead to increased energy and enhanced physical performance, so you can have more strength, power, and endurance for your workouts and other activities.

Overall, Alpha King is designed to boost your virility: that sense of being a confident, strong, energetic, and libido-enhanced man ready to take on the world.

But will Alpha King actually make you a more dominant man worthy of royal obedience? Read on to find out!

Force Factor Alpha King comes in capsule form, so let’s take a look at what’s in each serving (one capsule):

The highlighted ingredient in Alpha King is AlphaFen, which is a trademarked form of fenugreek extract. It is standardized to contain sapogenins, which are the main bioactive compounds in fenugreek. Fenugreek is most known for its ability to inhibit aromatase and 5-alpha reductase, which in turn can lead to more available testosterone.

And the research is pretty clear showing that fenugreek supplementation increases free testosterone and various aspects of physical performance.

Plus, specific research on AlphFen is associated with increased sexual desire, ability, frequency, and libido; reduced anxiety; and improved sleep quality and energy, compared to placebo.

Another common herb included in Alpha King is tribulus terrestris. Tribulus terrestris has been shown in some studies to enhance testosterone levels and improve libido while also boosting nitric oxide production and blood flow. However, not all research in humans has shown positive effects.

Up next in this formula is black maca, also called peruvian maca or peruvian ginseng. Black maca has been used for thousands of years in the Andes regions to enhance fertility, largely due to its composition of phytosterols, phytoestrogens, and other bioactive nutrients.

It has strong antioxidant and anti-inflammatory effects that carries over into protecting the brain and even enhancing learning and memory.

Plus, maca seems to be able to increase energy levels and improve exercise performance.

The final ingredient in Alpha King is diindolylmethane (DIM). DIM is a metabolite of indole-3-carbinol, a compound found naturally in cruciferous vegetables. DIM doesn’t directly increase testosterone, but it helps to act as an aromatase inhibitor and decreases “bad” estrogens, which can lead to higher levels of free testosterone.

So, what’s the verdict on Force Factor Alpha King?

Based on what’s all in it, it is likely that Alpha King will help boost testosterone and certain aspects of manliness.

By far the best thing about this product is AlphaFen. After all, fenugreek has a lot of research supporting its t-boosting benefits, plus there’s specific research on the AlphaFen formula showing sexual desire, energy, libido, and more.

On top of that, Alpha King uses a dosage of AlphaFen that’s right in line with the research.

The other ingredients are like the icing on the cake. Black maca is probably the second-best ingredient, particularly due to its ability to enhance energy and exercise performance.

And tribulus terrestris and DIM may add further boosts in testosterone, although these might not be anything major.

But overall, Alpha King seems like a pretty solid supplement for boosting testosterone, energy, and virility.

While Alpha King should have benefits, keep in mind that no product is going to lead to massive increases in testosterone (unless we’re talking about the juice).

But Alpha King should definitely be able to at least increase total and free testosterone and give you a mild to moderate improvement in energy and libido.

Of course, you still have to eat right, sleep well, and exercise to get maximal t-boosting results.

Who is Force Factor Alpha King Best For?

Alpha King is best for middle to older-aged men primarily because that’s what the AlphaFen study was done on, and given the fact that these men are more likely to have lower testosterone, energy, sex drive, etc.

But Alpha King can really be used by any man looking for increased testosterone as well as improvements in energy, libido, sexual desire, and overall virility.

Just remember that this supplement alone won’t give you all of that. It’s when you combine this supplement with a solid diet, exercise, and sleep regiment that you’ll really see the best results.

Some possible side effects of Force Factor Alpha King include:

Always consult your doctor before taking any dietary supplement.

You can buy Alpha King on the Force Factor website at this product link.

Each bottle has 30 servings (30 capsules). Each bottle costs $69.99, so at over two dollars per serving, it’s a pretty expensive product, but still not unheard of for testosterone supplements.

Primal Mind Fuel Review – Can It Give Your Brain A Boost?

Crazy Nutrition Intensive Pre-Train Review – Is It Worth The Purchase?

Iconic Protein Drink Review – Is It Really A Healthy Choice?

LivLean Review – Is This Perfect Origins Liver Supplement Worth Using?

Ketoxol Review – A Look At These Natural Ketogenic Weightloss Pills