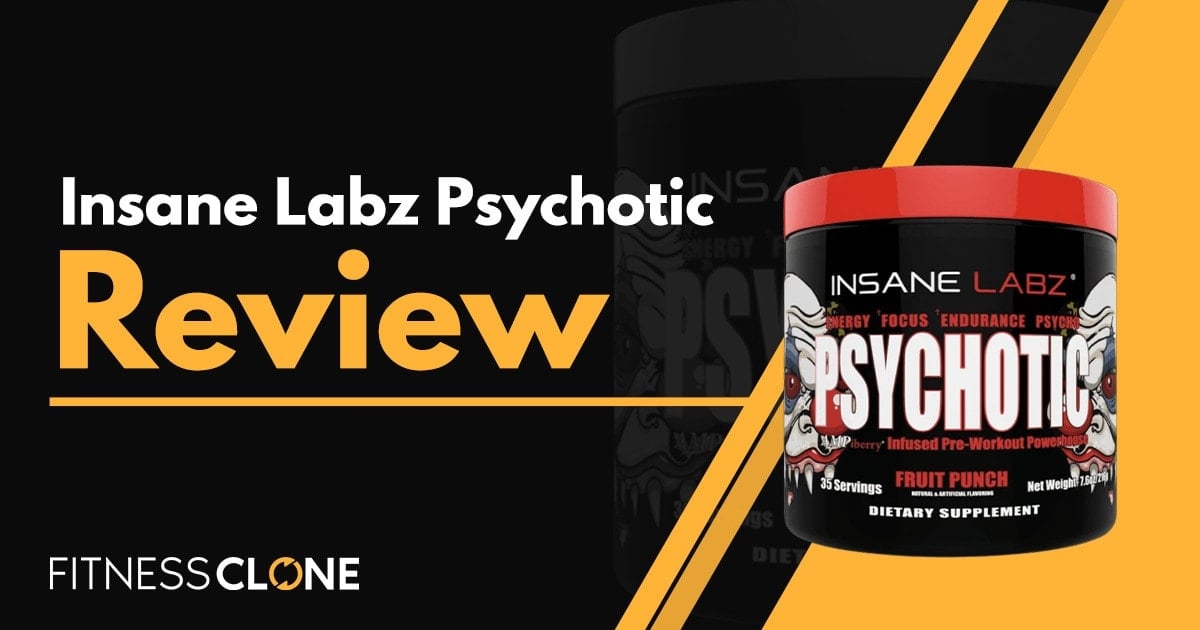 In terms of pre-workouts, some people simply just want to get the most intense effects as possible. For these die-hards, stimulants do not cause any reason for concern and are greatly encouraged. But how effective are these stimulant-loaded supps? If you’re a stimulant-lover, you’ll want to pay attention to this article where we review a pre-workout supplement called Insane Labz Psychotic.

Is this pre-workout worth the price? Does it have the right ingredients? We’ll discuss all of that and more in this Insane Labz Psychotic review. Ready? Let’s go ahead and get started! 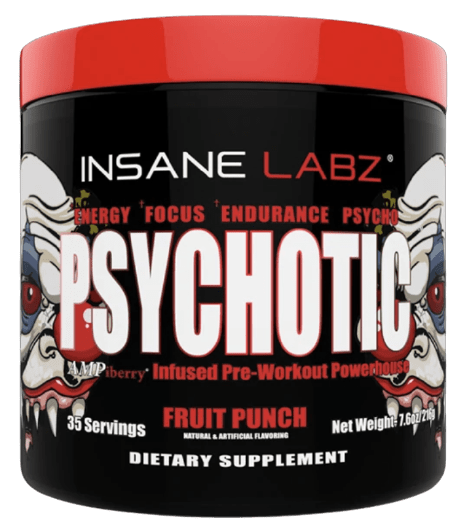 The primary benefits of Insane Labz Psychotic are, as they put it, insane energy, focus, and performance. It is simply designed to benefit all aspects of your workout.

They claim that Insane Labz Psychotic will help you keep up your strength, energy, and endurance throughout your entire workout and maybe even after, thanks to ingredients such as beta-alanine, caffeine, creatine, and DMAE. 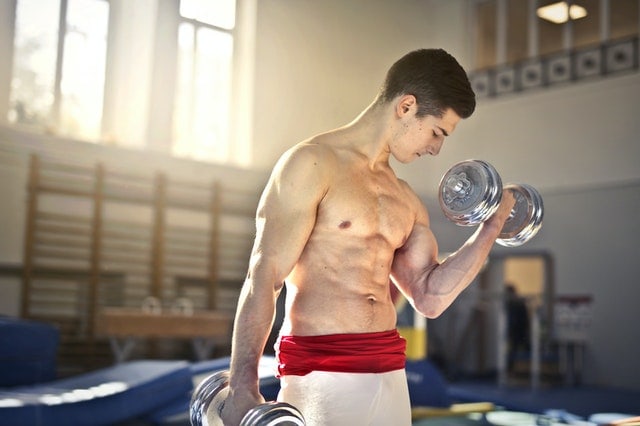 Insane Labz Psychotic is also designed to boost your mental focus, reaction time, and alertness with the inclusion of Huperzine A, caffeine, and others. They also claim that Psychotic won’t leave you with a crash feeling after your workout, allowing you to stay at your best the rest of the day.

So, are these claims legit…or is it all just a bunch of hype? Continue reading to see the verdict. 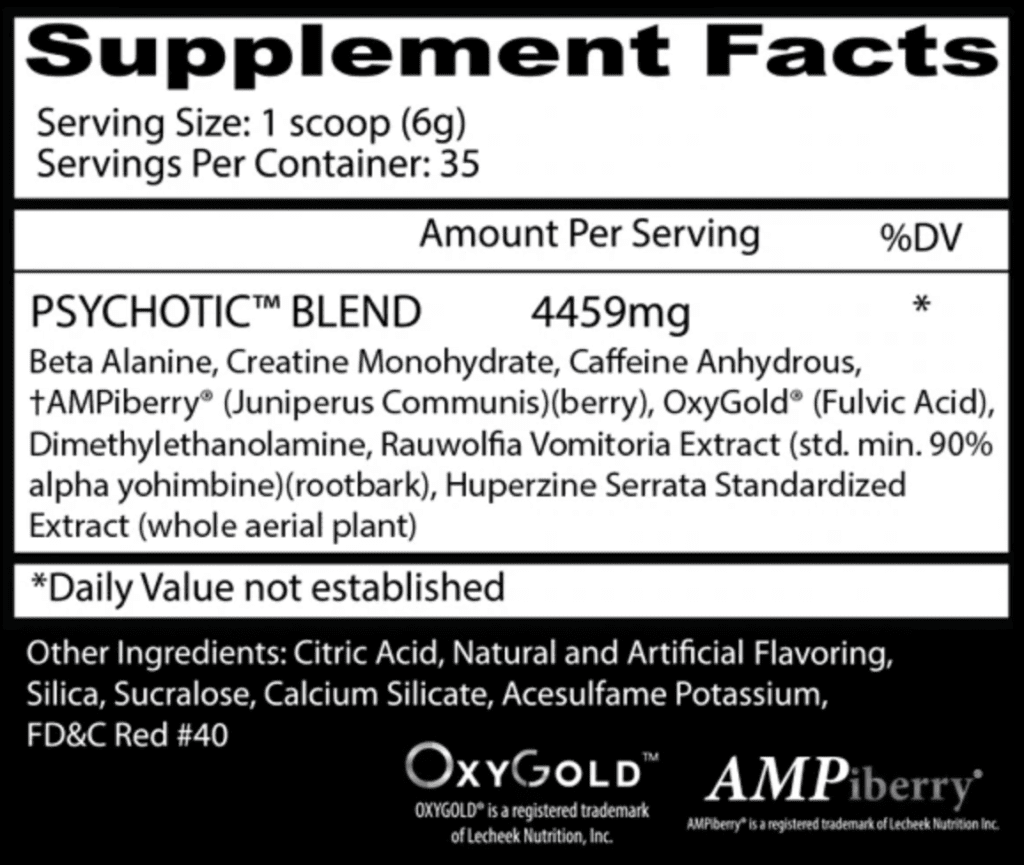 The first ingredient in the Psychotic Blend is beta-alanine, an amino acid long known for its performance-enhancing benefits. Beta-alanine supplementation can increase muscle carnosine content, which is important since carnosine is abundant in skeletal muscle tissue and is important during high-intensity exercise. It also offers a pH buffering effect in that it decreases the build-up of lactic acid in muscles, which can increase muscular endurance and decrease fatigue. Overall, research shows that beta-alanine supplementation improves high-intensity exercise capacity, especially muscular endurance, but possibly strength too. An effective dose is around 4 to 6 grams per day.

An ingredient even more well-researched than beta-alanine is creatine. Psychotic included the most well-known form in creatine monohydrate. Creatine is a non-protein amino acid found primarily in the skeletal muscle, where it plays a significant role in energy production. Most of it is stored as phosphocreatine, where it can be used during high-intensity exercise and for energy in general.

However, intense exercise degrades creatine, so this is why supplementation is beneficial for athletes and similar people. The research is clear that creatine supplementation increases strength, muscle mass, and overall performance, especially for strength and power athletes or people involved in high-intensity activities (e.g., sprinters). 5g is a commonly administered dose, though there is a wide beneficial range.

If there’s any ingredient that may be more well-researched than creatine, it’s caffeine. Psychotic has the specific form of caffeine anhydrous. Caffeine acts as a central nervous system stimulant where it acts as an antagonist of adenosine, leading to increases in neurotransmitters (e.g., dopamine, serotonin, norepinephrine) which can improve alertness, mood, and focus, and may delay feelings of fatigue. The same CNS-stimulating effects can help enhance nervous impulses, and caffeine may also help increase muscular contractions, so it could potentially lead to increased strength.

Overall, research shows that caffeine supplementation (especially in the range of 3 to 6mg/kg of body mass) is effective for increasing muscular endurance, aerobic endurance, strength, power, and more. If you are sensitive to this ingredient, though, there are supplements out there with no caffeine, such as BlackWolf Pre-Workout’s caffeine-free option.

Up next is AMPiberry, which is a trademarked form of the juniper plant. The juniper offers many health benefits and acts as an anti-inflammatory, anti-oxidant, anti-diabetic, pain-reducer, and more! For workouts, it’s supposed to act as a potent stimulant and increase the effectiveness of caffeine, while also increasing fat loss. But there are zero human studies evaluating these effects, which is probably why you won’t find this ingredient in Primal Surge, Chemix King Of Pumps, or most other pre-workouts.

Psychotic also includes OxyGold, a registered trademarked form of fulvic acid. Fulvic acid is a naturally occurring compound found in soil, compost, and other matter that has been broken down over time. It does offer a wide variety of health benefits, and some research shows it may improve stamina, decrease fatigue, and promote recovery after exercise, but there needs to be a lot more conclusive research.

Another ingredient in Insane Labz Psychotic is DMAE, a compound found naturally in small amounts in the brain. It is a precursor to choline, which in turn is important for the production of acetylcholine. And acetylcholine is involved in cognitive function, especially focus and memory, and it is also involved in muscular contractions. That’s why it is often touted as an exercise-enhancer, especially in regard to mental focus. However, there really needs to be more research before definitive claims can be made about its benefits.

Also included in Insane Labz Psychotic is Rauwolfia vomitoria extract, which itself contains an active ingredient alpha-yohimbine (rauwolscine). Alpha-yohimbine acts as an alpha-adrenergic receptor antagonist, which supposedly increases fat loss and also increases neurotransmitters, such as dopamine, serotonin, and norepinephrine. Yet, there needs to be more evidence showing that it can specifically improve workout performance.

The final ingredient in Insane Labz Psychotic is Huperzine Serrata extract, which is included primarily because of the compound Huperzine A, that is found in this extract. Huperzine A acts can increase levels of acetylcholine, which is important for memory and focus, among other things. But it’s not guaranteed to enhance mental focus during workouts.

After analyzing the ingredients, I wouldn’t expect much of a benefit from Psychotic. It is possible that you will receive some workout benefits, but nothing spectacular. 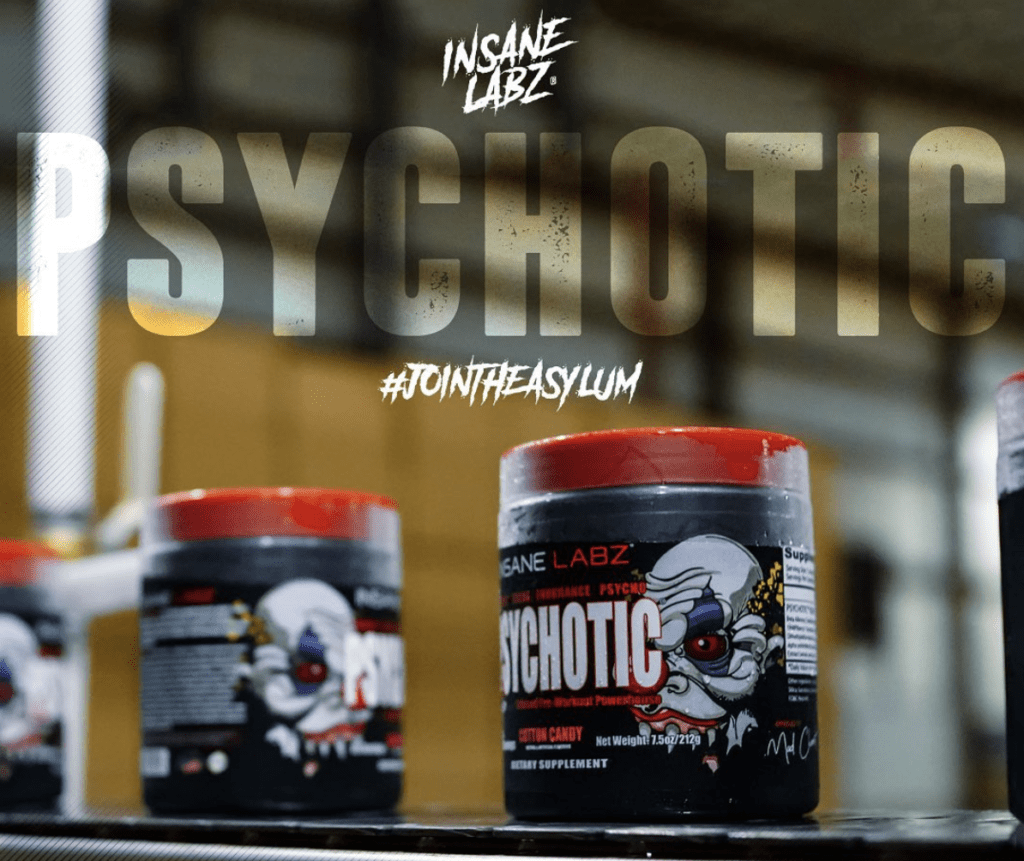 There are a few problems with Insane Labz Psychotic. First, it is a proprietary blend, so you don’t know how much of each ingredient you’re getting. Also, the total weight of the Blend is about 4.5 grams, yet you need around 4 to 6 grams of beta-alanine and at least 3 grams of creatine for effectiveness. Do you see the problem? It is unlikely that there is enough of each ingredient in here since the effective doses for just two ingredients significantly outweigh the weight of the Blend.

Another issue is that, while many of the ingredients are good in theory, there is a lack of research showing their effectiveness specifically as it relates to exercise performance.

Beta-alanine, caffeine, and creatine will likely be beneficial, but the other ingredients are up in the air. They may work, but they also may do nothing.

Insane Labz Psychotic is designed to increase strength, endurance, and energy, as well as mental focus, reaction time, and alertness. Based on these claims, only a few may happen.

With the ingredients beta-alanine, creatine, and caffeine, you likely will experience some improvements in strength, power, endurance, energy, and other physical aspects of workout performance. But it may not occur since you don’t know how much of each ingredient is in there. One exception is that they do say the total caffeine content from all sources is 400mg, which is quite a lot.

Caffeine should also improve your alertness and reaction time, but the other ingredients in Insane Labz Psychotic just aren’t definitive enough for boosting mental performance.

Who is Insane Labz Psychotic Best For?

Insane Labz Psychotic is best taken by people who enjoy stimulants and want to feel a rush of energy for their workouts. The caffeine content in Psychotic is really high, so it shouldn’t be taken by anyone who is sensitive to caffeine. Insane Labz Psychotic seems to be a bit overhyped in terms of the results you’ll get, but if you’re someone who enjoys a feeling of working out harder and having more energy, this might be for you. 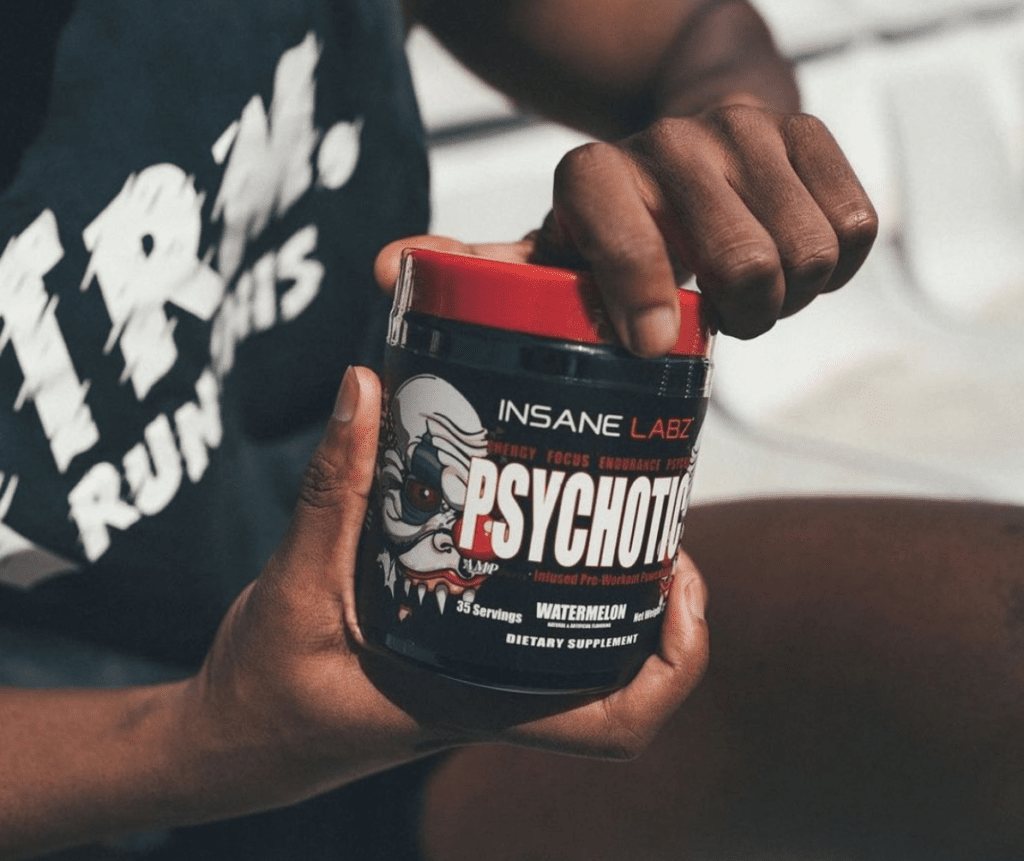 There are a few concerns with the safety of Insane Labz Psychotic, and a number of side effects may occur. These include:

Where to Buy Insane Labz Psychotic

If you’re interested in trying out Insane Labz Psychotic for yourself, head on over to the Insane Labz official website here. 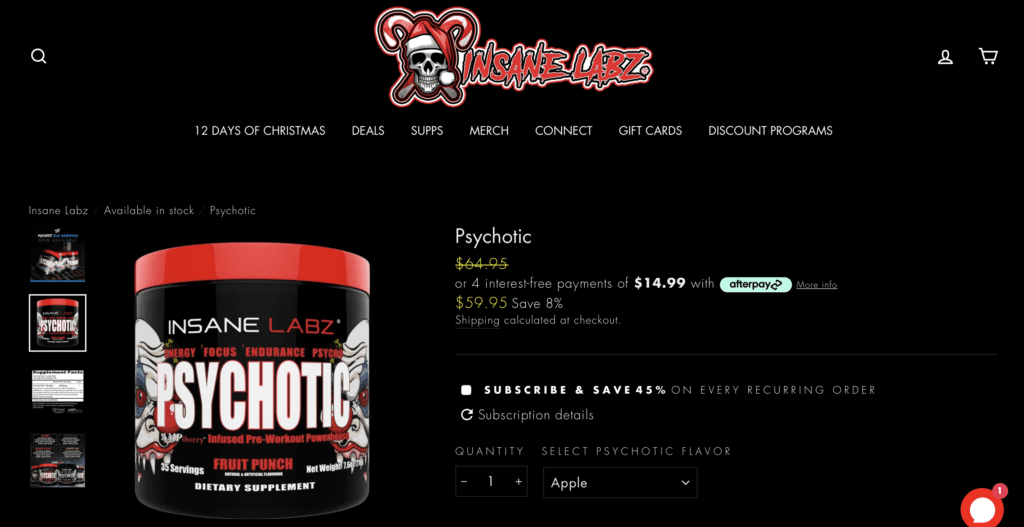 There are 35 servings (35 scoops) per canister of Insane Labz Psychotic with a price of $59.99. So you’re looking at about $1.70 per serving, which is a little more expensive than other pre-workouts.

Overall Rating: 3.58 out of 5
Categorized in: Pre-Workout Reviews, Reviews