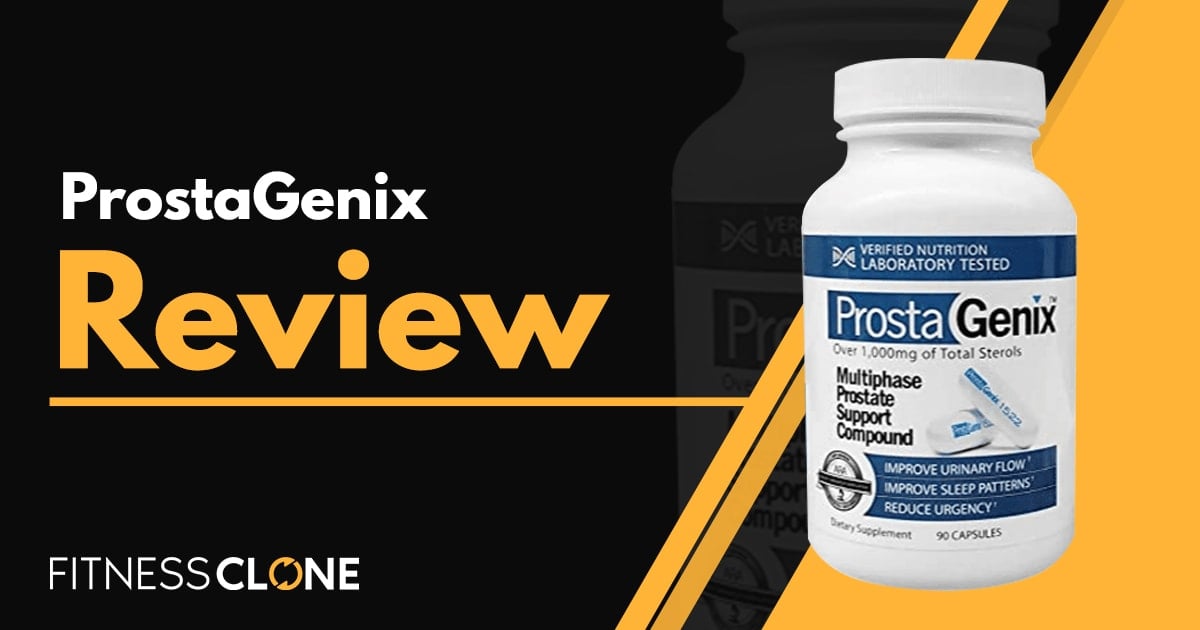 Prostate health is a concern for many middle- and older-aged men. After all, increased nighttime awakenings, frequent bathroom trips, and discomfort are some pretty annoying symptoms that most men would rather not deal with.

That’s why many men are looking into prostate supplements to try to restore their prostate health back to normal. But many products that are advertised to work simply don’t live up to the hype and, with that in mind, it can be challenging to find the right supplement.

That’s why we’re going to take an in-depth look at one option called ProstaGenix. This prostate supplement is supposedly one of the best out there, but does it really stand up to all the claims? In this ProstaGenix review, we’ll talk about this supplement’s formulation, benefits, claims, pricing, and more so you can find out if it’s truly worth the purchase.

Without anything further, let’s get started with this in-depth ProstaGenix review!

ProstaGenix is a multiphase prostate support supplement for men, with a significant number of accolades. For example, ProstaGenix was rated number one out of 157 products tested for potency, and it also won the 2021 prostate competition from ConsumerLab. Furthermore, it is recommended by Dr. Dudley Danoff, whom ProstaGenix says is America’s top urologist.

But what makes ProstaGenix so special? They say it all comes down to ingredient quality and potency, especially with their main ingredient, beta-sitosterol. They include over 800mg of beta-sitosterol, which is much more than any other prostate product out there. Plus, there are many other ingredients designed to support prostate health and men’s health in general, such as zinc, vitamin D3, selenium, campesterol, and grape seed extract.

ProstaGenix is marketed as the number one multiphase prostate support compound in the United States. It is advertised to deliver the following benefits:

With a high dose of beta-sitosterol, other sterols, and various antioxidant compounds, ProstaGenix is designed to reduce prostate inflammation and get your prostate back to normal size and function.

ProstaGenix is also designed to improve a number of aspects of urination, including decreased bathroom “urgency,” so you don’t have to rush to the bathroom anymore; fewer nighttime bathroom runs, so you can sleep better and feel more refreshed; and normalized urination function, including less dribbling and leaking, so you can really “go” how you were meant to.

Finally, ProstaGenix is supposed to help you get back into the game with more rejuvenation and libido, indirectly by reducing urinary problems (which improves confidence) and directly through various ingredients supportive of men’s health, such as zinc and vitamin D3.

ProstaGenix has received a lot of praise and appears to be a high-quality prostate supplement. But don’t go out and buy it just yet! Let’s see if ProstaGenix can truly live up to its claims.

Highlighted by beta-sitosterol, ProstaGenix actually has many other ingredients.

Below is what’s in each serving (3 capsules):

One of the main ingredients is the BetRexin Proprietary Sterol Blend, which consists of beta sitosterol, campesterol, stigmasterol, and brassicasterol. These are all phytosterols, which are compounds found naturally in plants.

Among these, beta-sitosterol is the most researched, with evidence showing that it can improve urinary symptoms and flow measures in men with benign prostatic hyperplasia (BPH). Plus, more recent research has shown that beta-sitosterol improves urinary excretion and flow rate while also increasing testosterone in middle-aged men with BPH.

This is all thought to occur primarily due to its ability to reduce prostate inflammation and its inhibitory actions on 5-alpha-reductase, an enzyme involved in prostate growth.

Grape seed, pomegranate, and quercetin are all loaded with antioxidants and anti-inflammatory compounds which can benefit many areas of the body, including the prostate.

Also, grape seed extract, pomegranate extract, and quercetin, have all been shown to slow the production of prostate cancer cells in some cases, likely by blocking the activity of prostate-specific antigens (PSAs) and androgen receptors.

While this is definitely not a dedicated trace mineral supplement, like Dr. Berg’s Trace Minerals or other options, ProstaGenix does still include the two trace minerals of silicon and boron in its formula.

Boron is known to affect steroid hormone levels, and people who have higher intakes of boron seem to have a lower risk of prostate cancer and other prostate health issues.

Silicon doesn’t appear to have any relationship with prostate health.

We also see a bunch of minerals in ProstaGenix, including iodine, zinc, selenium, copper, manganese, chromium, and molybdenum.

Selenium and zinc are both important anti-inflammatory and antioxidant compounds, and they play key roles in immune function and hormonal health. Low levels of these minerals are related to an increased risk of prostate cancer as well as low testosterone, among other things.

Plus, other minerals are known to decrease the risk of prostate cancer, such as iodine, molybdenum, and manganese.

Overall, these minerals won’t have a huge effect on BPH and its related symptoms, but they do play a role in overall men’s health and wellness and some aspects of prostate function.

ProstaGenix has received a lot of praise from different sources, and we at FitnessClone also believe it will be a quality prostate supplement.

The main ingredient is beta-sitosterol, which has been very well-researched to improve a number of urinary symptoms and overall prostate health. Now, it’s included in a blend, but we still know how much is in there since it has been independently tested for the dosage. And with over 800mg of beta-sitosterol, this is more than enough to produce meaningful effects.

The inclusion of grape seed, pomegranate, and quercetin is also beneficial since these have anti-inflammatory and antioxidant effects, which could reduce BPH symptoms as well as prostate cancer. The weight of that blend is 300mg, and since all of these offer similar effects, this dosage is likely effective even though the dose of each individual ingredient is lower than what’s typically used in studies.

Plus, there are other ingredients at research-backed dosages that play a role in male health, namely vitamin D3, selenium, boron, and zinc.

Overall, ProstaGenix has high-quality ingredients at research-backed dosages, although it still would be best to include the dosages of the individual ingredients in their blends.

ProstaGenix is promoted to decrease prostate inflammation and improve a number of BPH symptoms common in older men, such as frequent bathroom trips, problems fully urinating, and nighttime awakenings to pee.

Overall, these claims should be true, mostly due to the research on beta-sitosterol showing it can improve urinary flow, reduce residual urine, and reduce prostate inflammation.

They also claim that men will experience an increased sex drive, and this may occur due to vitamin D, zinc, selenium, and boron, although it likely won’t be anything hugely noticeable.

The main benefits are for prostate health, and ProstaGenix should do pretty well here.

Who is ProstaGenix Best For?

ProstaGenix is best for middle- to older-aged men who are experiencing the symptoms of BPH or who want to try to prevent BPH.

It isn’t a cure, but ProstaGenix could very well help you if you have prostate discomfort and the different problems with urination mentioned above.

Some possible side effects of ProstaGenix are:

Where to Buy ProstaGenix

You can buy ProstaGenix on the official website here.

Each bottle has 30 servings (90 capsules). The price on the official website lists a one-time purchase as $49.95. You can also purchase three bottles for a discounted price of $99.95, saving you $109.90. ProstaGenix’s final option is buying five bottles at once for $149.95, saving you $199.80. So you’ll get the most savings if you purchase in bulk. All of this is in the normal range when it comes to prostate supplement pricing.

Additionally, the official ProstaGenix website also offers a 90-day money back guarantee, so you don’t have to feel like your purchase is risky.

ProstaGenix is also available on Amazon at this product link.

EyePromise Restore Review – What Can This Supplement Do For Your Eyes?

Prevagen Review – Everything You Need To Know About This Brain Supplement

Alaya Multi Collagen Review – Is This Supplement Worth Purchasing?

Neuro 24 Review – A Look At This Pure Hustle Brain Formula

Huge Supplements Exterminate Review – Is This Fat Burner Worth Using?