Ghost Vegan Protein Review – What Can It Do For The Vegan Diet? 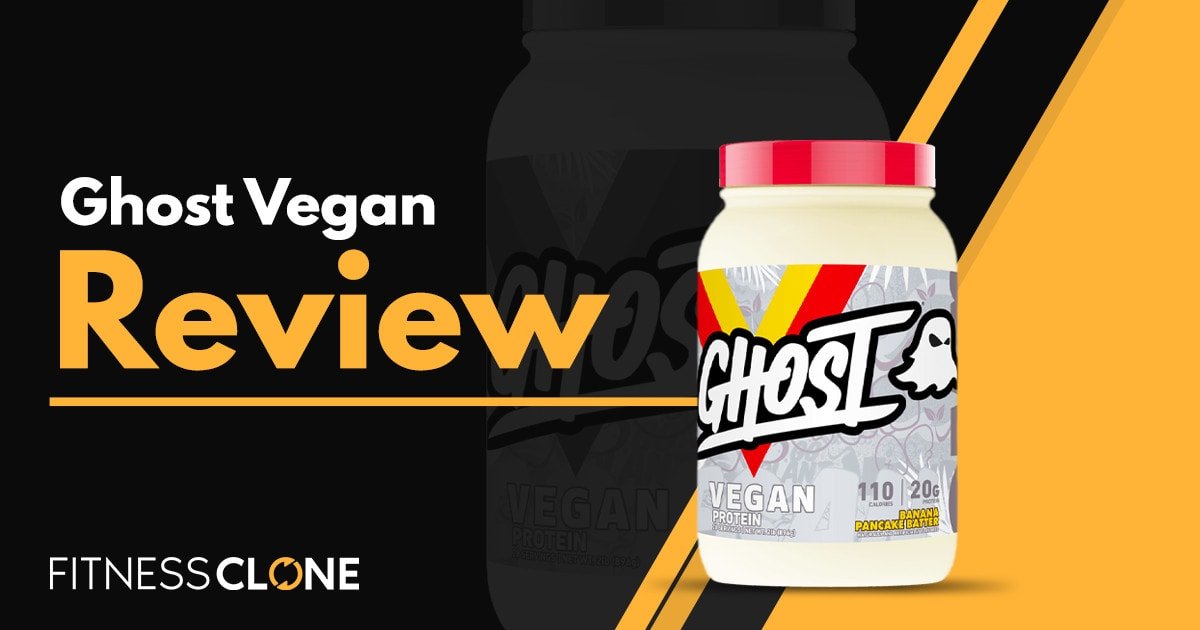 You’re likely sick and tired of hearing about protein. It’s being blasted all over social media, there are a growing amount of commercials about it, and it’s something most of your friends are obsessed with — especially the ones that lead an active lifestyle. Protein is everywhere.

The truth is there isn’t any one simple answer in regards to how much or what source of protein each individual should be targeting. It’s important to understand that not all protein is created equal — especially when comparing whole food protein and protein powder or protein shakes. Additionally, the world of protein becomes even more confusing when you’re looking to find a choice that meets the needs of a strict diet – such as a vegan diet.

Thankfully, with such a wide range of protein powders and protein shakes available today, vegan options are out there. One such popular vegan protein option is Ghost Vegan Protein.

This 100% plant-based protein powder is soy-free and designed to provide those following a vegan diet with the protein they need. In this review, we’ll take a hard look at Ghost Vegan Protein to determine whether or not it’s the right protein powder for you. Let’s get started!

What Is Ghost Vegan Protein?

Ghost Vegan Protein is yet another protein powder available on the market today. It’s brought to you by Ghost Lifestyle, a rather new sports nutrition brand. They’ve been pushing out sports nutrition products for nearly five years now and have a strong social media following.

The brand was founded by Ryan Hughes and Daniel Lourenco. Hughes is a former IFBB Pro turned CMO and heads the brand’s marketing efforts, with Lourenco is known as the Chief Ghost and is largely responsible for the products, formulas, and overall vision of the brand.

With Ghost Vegan Protein, they offer a 100% plant-based protein powder that’s soy-free and available in ‘legendary’ flavors. They claim it’s as easy to drink as it is to digest, making for an epic protein-building experience that eliminates the need for proprietary blends. 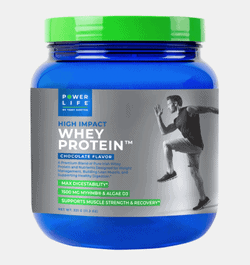 Check Out Our TOP RATED Protein Powder Our team has reviewed hundreds of popular supplements - this is our favorite protein powder.Click here to learn more

Before we get into the specifics of what Ghost Vegan Protein contains and what you can expect from it, it’s important we give you some background information regarding what protein is, why we need it, why plant protein is so popular, and whether or not you can trust this brand.

Why do we need protein?

Protein is one of the three macronutrients that are essential to your daily diet. Macronutrients — which include protein, carbohydrates, and fats — are needed in large amounts throughout the day (macro means large). They are what the body uses as energy in the form of calories.

In addition to energy, each macronutrient is responsible for providing unique benefits to the body. With protein, it’s responsible for building, growing, and developing the body’s tissues, muscles, bones, hormones, and enzymes. It also helps protect the body’s muscle mass (body mass).

What are amino acids?

Anytime you talk about protein, you’ll likely hear the term ‘amino acids.’ These are also known as the building blocks of protein, meaning they make up the protein we’ve grown to admire over the years. Without amino acids, we wouldn’t have protein as we know it today.

How much protein do we need per day?

Everyone needs a different amount of protein each day, and it largely depends on that person’s weight, activity levels, gender, and more. The best way to calculate how much you need is by multiplying your weight by 0.36 — meaning you need 0.36g of protein per pound of body weight.

While quantity is extremely important with protein, that’s not the only thing you need to be concerned about. Quality is just as important, especially since not all protein is created equal. Some protein is considered a complete protein and some are considered incomplete.

While Ghost Vegan Protein is a plant-based protein, it’s still considered a complete protein because it utilizes three different plant-based sources that satisfy all nine essential amino acids — even though none of those sources are complete proteins on its own. Instead, it’s a community effort.

Now that we understand a little more about protein and why it’s so important to our daily health, we can start to take a deeper look at Ghost Vegan Protein and what makes it so unique.

Pea protein is the big hitter here. It actually contains all nine essential amino acids (EAA), but it contains an extremely low profile of methionine — one of those nine EAAs. It’s relatively high in BCAAs (which include valine, leucine, and isoleucine) and high in arginine.

Pumpkin protein is the second-most prominent protein source in the Ghost Vegan Protein formula. It also contains all nine essential amino acids, but is relatively low in a number of those. It’s high in BCAAs, lysine, and arginine, but not so much in methionine, tryptophan, histidine, and threonine.

Finally, we have watermelon seed protein, which is high in tryptophan, threonine, histidine, and BCAAs. They don’t use as much of this protein source, but it definitely has its benefits in helping the body get the right amounts of each essential amino acid when combined with the others.

The good news, unlike most plant-based protein powders, is that each of their flavors is soy-free, gluten-free, and 100% vegan-friendly. Instead of soy, they use sunflower alternatives to appeal to those that have a soy allergy — which is more common than you’d think.

All four of the different flavors have the same packaging, with the exception of one little color element that’s seen on the big “V” behind the big “GHOST” title. It’s not the most attractive packaging label design, but it’s definitely unique from what most supplements offer today.

The jug is a tan color, while the label features a gray background, white and black lettering for the company name, and the big “V” that’s both red and yellow/brown depending on the flavor.

Each jug of Ghost Vegan Protein contains 28 servings (scoops), with each scoop being between 32 and 35 grams of powder, depending on the flavor. You get to choose between Banana Pancake Batter, Chocolate Cereal Milk, Peanut Butter Cereal Milk, and Pancake Batter.

You can purchase one jug for $44.99 on GNC’s website, which will last you one month when taking one scoop per day — which is all most people will need. That comes out to $1.50 per protein shake, which isn’t all too bad when taking it daily. It can get expensive if drinking multiple shakes per day, though. Additionally, you can also save 10% and get free shipping by signing up for GNC’s auto-delivery system. 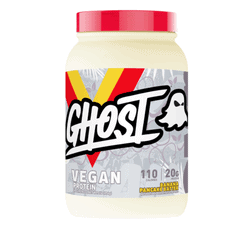 We mentioned above how not all protein is created equal. Well, the same can be said about protein powders. Some of them are made right and clean, while others are made with unnecessary additives and harmful fillers. So, which one is Ghost Vegan Protein?

Outside of that, they really wanted to do what they did best — which is offer a supplement with legendary and epic flavors. They also wanted to ensure their label was 100% fully-transparent, so customers didn’t have to guess what was in each serving.

After taking a long, hard look at the formula and what it provides per serving, it’s clear that they hit the mark on all of those things. It uses pea, organic pumpkin, and watermelon seed protein to stay vegan-friendly. They don’t use gluten and opt for sunflower alternatives instead of soy.

Their four flavors are definitely unique, and their label is definitely transparent. Of course, there are a few things we don’t like about it. For example, it does include a high amount of sodium in each serving and includes sucralose as an artificial sweetener — which helps the taste but not the body.

The world of protein powders is always growing and evolving. New companies, brands, and formulas are introduced on a consistent basis — not to mention the formulas that are updated or revamped to keep up with demand. With that said, Ghost Vegan Protein is far from your only choice.

If you weren’t quite feeling the formula in Ghost Vegan Protein, don’t worry. We’re going to detail several competitors and alternatives that provide a plant-based protein powder for those that want to remain vegan. Some of them will even include some added components for more benefits.

Of all the plant-based protein formulas out there, nothing compares to what Four Sigmatic provides. It’s not only plant-based but also organic, gluten-free, dairy-free, and free of gums, fillers, and artificial flavors. It gives you everything you need while eliminating what you don’t.

As far as protein goes, it contains pea protein, hemp protein, pumpkin seed protein, chia protein, and coconut protein — but that’s not all. Four Sigmatic is most-known for their use of functional mushrooms, which include Chaga, Reishi, Cordyceps, Lion’s Mane, and Turkey Tail.

The mushrooms above are great for the immune system and also give your body a full-blown makeover. The added Ashwagandha and Eleuthero provide adaptogenic properties, as well.

The sampler comes with three different flavors — creamy cacao, sweet vanilla, and peanut butter. It’ll cost around $110 for 30 servings (10 of each flavor), but it’s 100% worth it!

High Impact Plant Protein is one of the many offerings by Tony Horton, a world-renowned personal trainer, author, and actor. Most people know him as the creator of P90X, which has grown to be one of the most popular commercial home exercise regimens today.

The main thing you should pay attention to with this formula is the use of HMB. It’s supposed to be excellent for working out, but more studies and research is needed to confirm its benefits. It’s also rather expensive for what it provides, costing around $70 for a jar of 15 servings.

Finally, we have one more competitor to take a look at. With ath Plant Protein, you receive a tasty and smooth protein shake made of organic rice protein and organic pea protein. Each serving contains 16 grams of protein, 80 calories, 1.0 grams of fat, and 2.0 grams of carbs.

It’s gluten-free, keto-friendly, plant-based, non-GMO, soy-free, paleo-friendly, and dairy-free. Each jug contains 30 servings (one-month’s supply) and costs you around $43, though you can save money by purchasing multiple jugs at once — as low as $36.50 when buying four jugs.

There are so many protein powders available today and choosing the right one can be extremely difficult. While Ghost Vegan Protein is 100% plant-based and comes with a wide range of benefits, it’s not going to be the best choice for everyone due to the sodium and sucralose.

One of the main things that most people like about Ghost Vegan Protein is the flavors, but that’s sometimes overshadowed by the disappointing mixability — each scoop is around 32-35 grams of powder. You’ll either need to deal with chunks or a much larger shake than anticipated.

The good news is you have several high-quality alternatives to choose from, especially with Four Sigmatic’s Protein Sampler. If you come to find that Ghost Vegan Protein isn’t for you, definitely consider some of their competitors and alternatives for a clean, effective, and robust formula.

Overall Rating: 3.64 out of 5
Categorized in: Protein Reviews, Reviews