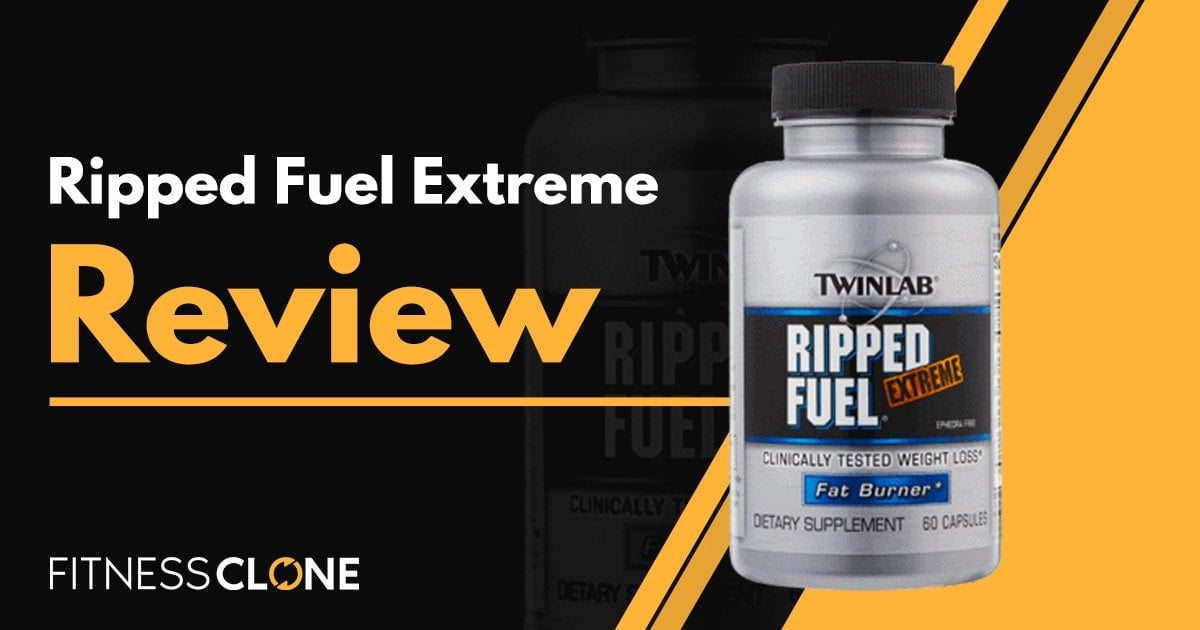 TwinLab is a company that takes your wellness personally, and makes supplements that fit YOU, not someone else. That’s because they want you to feel like your best self, using science-backed ingredients tailored to your life.

That’s because as a father of not just one set of twins, but TWO, the founder of TwinLabs discovered that no two people—not even twins—have the same nutritional needs. This, along with his background in the pharmaceutical industry, inspired the creation of high-quality supplements and individualized wellness plans to help you feel your best.

So, does their weight loss supplement live up to the hype? Let’s take a closer look at TwinLab’s fat burner, Ripped Fuel Extreme. We’ll dive into this supplement’s ingredients, benefits, claims, and more to help you decide if it’s worth the price. Ready? Let’s get started with this Ripped Fuel Extreme review! 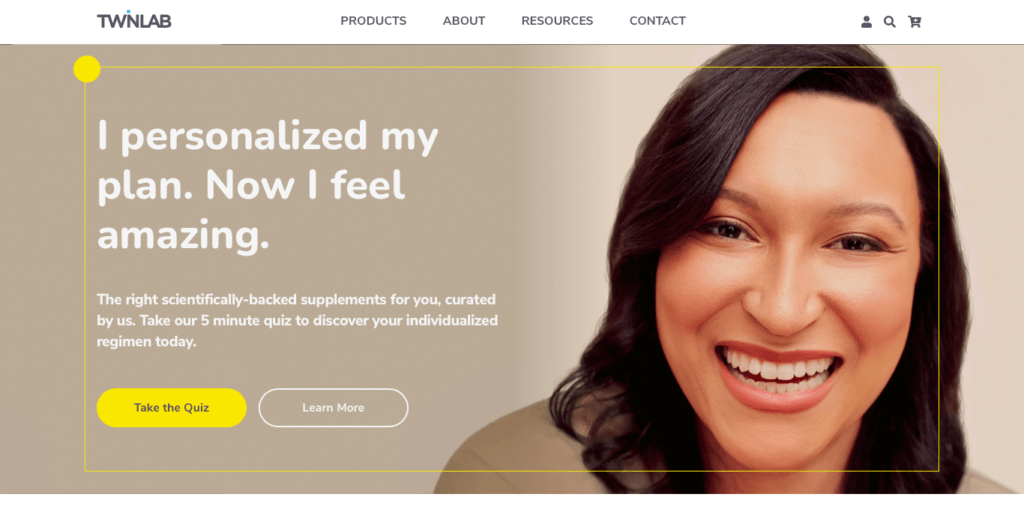 Every other supplement maker has a version of it, so why not? TwinLabs adds the obligatory doses of caffeine, more caffeine, amino acids, plant compounds, and minerals to theirs, along with their own special version of marketing to convince you it’s different from the others.

And of course, it is, since unlike what other companies sell, Ripped Fuel has TwinLab’s name on the bottle! 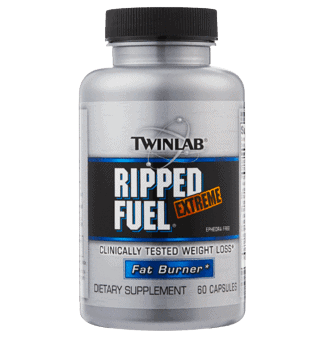 TwinLab puts advanced amounts of caffeine into their formula to go along with advanced amino acids and other advanced compounds to promote advanced fat burning, so onward ho!

In all seriousness, TwinLabs is a respected supplement maker known for their quality ingredients and the efficacy of their products. With this in mind, the product is produced using ingredients with science behind their efficacy, and no matter how similar this product may be to all the others on the market, it is made by a reputable company, and can help you burn more fat.

That, and these ingredients all work for other companies’ offerings, so we’re sure they’ll work in TwinLab’s formula as well. 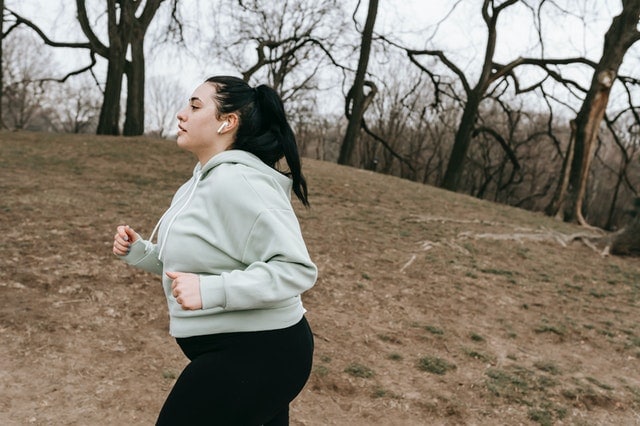 Even with TwinLab’s stellar reputation, it’s still good to have scientific verification that the ingredients do indeed work for the purpose. For instance, chromium has been proven in animal studies to increase lean body mass while reducing body fat, and it’s also long been known that it plays a role in carbohydrate and fat metabolism.

What we don’t know, however, is the true synergistic effects of all the ingredients in this formula. While there is proof that each ingredient has at least some positive effect for the purpose, we can only speculate that adding all the ingredients together in one compound may provide additional results.

It isn’t just getting rid of fat that’s a concern for us so much as it is doing so while preserving—or better yet, increasing—lean body mass. By targeting body fat rather than muscle, the ingredients in Ripped Fuel can help you do just that—at least, so long as you’re doing your part by eating right and exercising regularly.

In other words, you can’t just sit on the couch relying on Ripped Fuel to do it all for you—at least, not here in the real world!

Ripped Fuel Extreme includes 7 main ingredients within its formula. These include Chromium Polynicotinate, a proprietary herbal extract, cocoa seed extract, green tea leaf extract, caffeine, L-Carnitine, and cayenne fruit extract. We will take a more thorough look at each of these ingredients below. 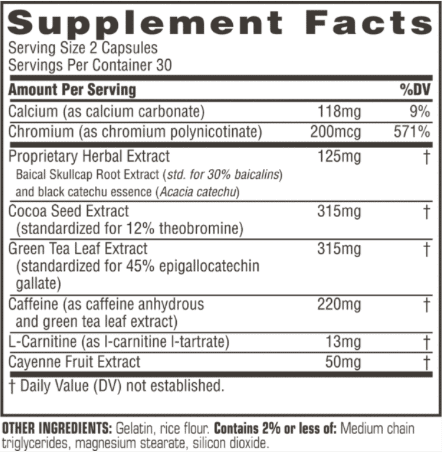 Don’t get all worked up there, Erin Brockovich; this isn’t the toxic industrial stuff that led to the biggest class-action suit in American history. Instead, this is a version of chromium that’s an essential mineral that helps insulin work in your body.

And, since insulin is essential in metabolizing fats and carbs, you can see how having a good working supply of chromium will help it do its job.

Though black catechu has been linked to fat loss in at least one study, we’re guessing the skullcap is in here to counter the effects of all the caffeine.

After all, why would an herb that’s long been used as a sedative and sleep aid be in here? Certainly not to help you sleep the fat off like a bear…

It enhances your blood nitric oxide levels to lower blood pressure and boost endurance, and it may reduce your appetite, increase your fat metabolism, and lower inflammation to help the pounds—at least the squishy ones—disappear.

Plus, just in case the whopping 220 mg of caffeine in Ripped Fuel isn’t EXTREME enough for you, cocoa is also a natural source of a touch more of it along with theobromine, just to send you over the edge.

And speaking of caffeine, when has too much ever been enough? It’s what may give green tea its thermogenic effects, though it’s also countered by the L-theanine in green tea, which is an amino acid that can help you chill against the caffeine frenzy. Green tea is also rife with antioxidants to lower fat-causing inflammation in your body.

Plus, we’re pretty sure there’s an ordinance of some kind that requires all fat burners to have green tea in them, otherwise it can’t be called a fat burner.

You gotta have pep in your step if you want to burn fat, and at a hefty 220 mg plus all the hidden green tea/cocoa caffeine that’s probably in the product, this should give you the pep of a hummingbird.

And yes, it’s advised that you skip your normal double espresso, or at least back it off to a single along with this product, since too much caffeine can have the opposite effects that we’re looking for in a fat burner. For instance, caffeine jazzes you up by boosting your production of energizing stress hormones, one of which is cortisol.

The problem is that cortisol buildup leads to high blood sugar and inflammation, both of which lead to body fat.

But used wisely, caffeine is a great energizing fat-burner, and pretty much the last legal stimulant on the market that really works. If you are someone who wants to avoid caffeine, there are a few weight loss and fat burner alternatives out there. Some caffeine-free options include Night Shred, Burn Lab Pro, and Slimvance.

l-carnitine is an amino acid that helps fatty acids make their way into your cells to be used as fuel. Plus, there’s evidence that it can boost exercise performance, improve muscle recovery, and increase your stamina and blood flow via more nitric oxide production.

Yes, it may take time for you to notice these effects, though there’s a reason this amino acid is so popular in fat burners and other workout formulas, which is that it works.

Capsaicin doesn’t just make food tastier—assuming you can take the heat—it can also crank up your metabolism and light up more fat as well. It’s been shown in studies to do this at varying levels, and it’s proposed that this is due to it having thermogenic effects—i.e., it helps your body produce more heat, which requires more calories—as well as working as an appetite suppressant.

Though there are some studies that show promise so far as the hot stuff helping you burn more fat, there is also evidence that it doesn’t work so well for those who consume spicy foods on a regular basis.

In other words, if you like your vindaloo done right, adding a little cayenne pepper in a pill probably isn’t going to do much for you. On the other hand, if you’re one of those who find ketchup to be too spicy, this may be the perfect way for you to get some burn-free help with your midsection.

As do other fat burners containing the same or similar ingredients, yes (say it with us), Ripped Fuel Extreme can help you burn more fat as long as you’re doing your part. This means eating right, exercising regularly, and getting enough hydration and sleep rather than just popping some pills and hoping for the pounds to disappear.

In other words, it’s meant to compliment your hard work and good habits, not replace them. 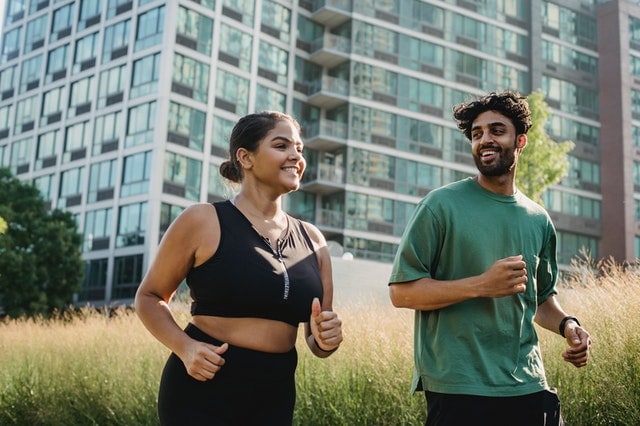 Who is Ripped Fuel Extreme Best For?

Anyone over the age of 18 who can take the loads of caffeine in this product and isn’t breastfeeding, pregnant, or on any medications that may interact with its ingredients, may benefit from it. The caffeine and L-carnitine make it a good pre-workout formula, and it can also get you revved up and focused before games or races.

But keep in mind that loads of caffeine may also come with loads of performance reducing side-effects, such as gastric distress, sleeplessness, and ultimately, fatigue rather than energy. Add in the twitchy, nervous, cranky feelings it can cause, and we can conclude that caffeine isn’t best for everyone.

Twinlab is a respected name in the supplement industry, and they didn’t earn their stellar reputation through the sale of snake oil. Sure, snake oil may have some benefits, but unlike the ingredients in Ripped Fuel Extreme, there is no scientific evidence of such.

So, when TwinLab says there’s science indicating their product works, believe them, there is.

Do we really need to fill you in on the side effects of lots of caffeine? Just in case you need a reminder, high blood pressure, irritability, and nervousness top the list, and it goes on from there.

The good news is that Ripped Fuel Extreme also contains skullcap and L-theanine to help counter all the caffeine, though 220 (at least) mg’s is still a lot, especially if you’ve already knocked back your morning Joe and perhaps had some chocolate or tea as well.

Feeling like a cranky hummingbird? There’s a reason for that…

Where to Buy Ripped Fuel Extreme

At $24.52 for about a month’s worth, TwinLabs isn’t gouging you here. Of course, neither are any of their competitors, all of whom charge around the same for what essentially amounts to being caffeine pills with a few extra ingredients.

You can also lower your cost by a couple of bucks-and-change to $22.07 when you sign up for regular deliveries, and if you can work up an order of more than $75, TwinLab will ship it free. 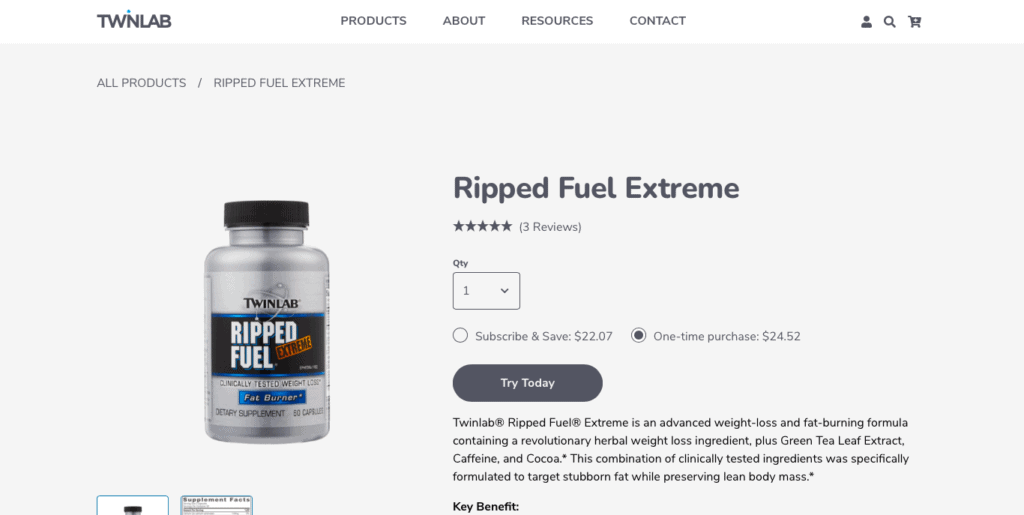 Along with TwinLab’s site, Ripped Fuel and other TwinLab products are readily available everywhere quality supplements are sold. This includes all the big Walmarts and Amazons, as well as many independent retailers, both online and traditional.

Synedrex Review – How Does This Fat Burner Stack Up?

IdealLean Pre-Workout Review – How Does It Compare?

Ritual Synbiotic+ Review – Is This 3-In-1 Gut Health Supplement Effective?

Burn PM Review – Should You Use This Appetite Suppressant?

Sworkit Review – Is This Fitness App Right For You?