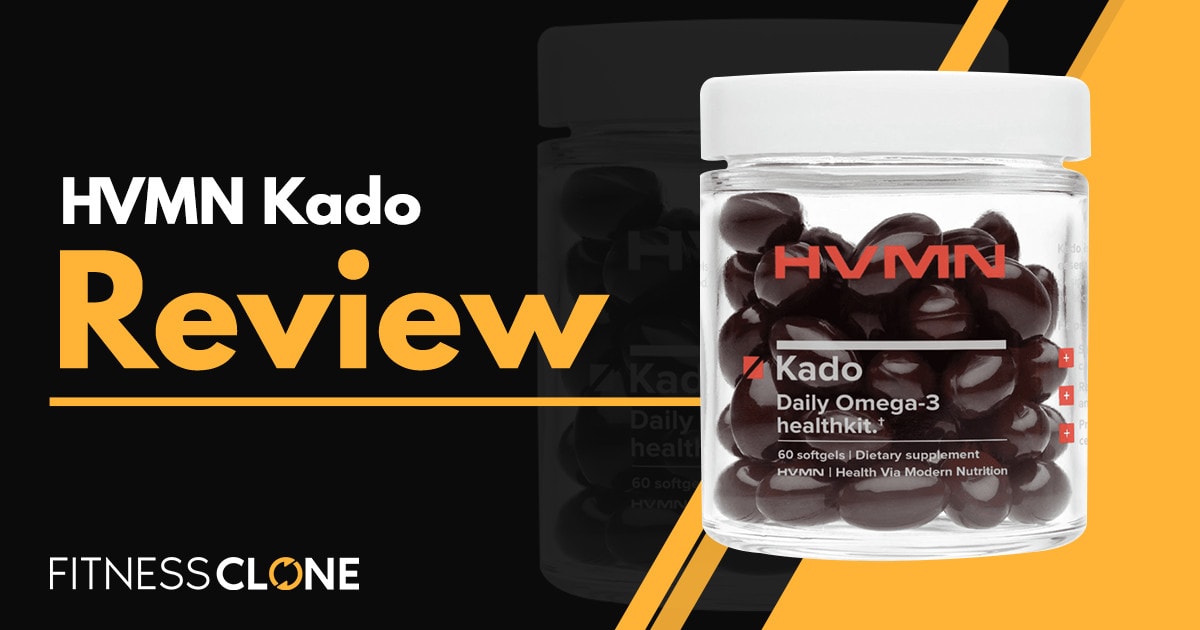 Most people don’t want just one part of their body to be healthy; they want all areas of their body working at a high level, mentally, physically, etc. And one of the best ways to achieve optimal levels of health is to ensure adequate intake of micronutrients, especially ones that people are notoriously deficient in.

Yet, many people do exactly the opposite of this, usually not out of ignorance but rather a lack of understanding. Of course, supplementation can be a way to fill those gaps, but do they always work? And what areas of the body do they actually benefit? In today’s review, we’re going to go over an all-around health supplement called HVMN Kado to see just how many areas of the body it can positively affect.

Is HVMN Kado worth the cost? Does it have the right ingredients? We’ll answer those questions and more in this complete HVMN Kado review. Ready? Let’s dive in!

HVMN Kado is designed to optimize both the mind and body. It is featured by omega-3 fatty acids but also includes other healthy substances designed to further enhance mental and physical health, such as vitamin D. HVMN Kado includes ingredients that are supposed to act as key building blocks for the body, which in turn leads to higher health.

Specifically, HVMN Kado is advertised to support heart health, brain function, strong bones, and overall cellular health. These are all primarily due to the inclusion of omega-3s but also supplementary ingredients such as vitamin D and vitamin K.

One of the main advertised benefits of HVMN Kado is cognitive protection, which again they say is due to the omega-3s.

So, overall, this looks like a supplement designed to promote overall health with an emphasis on cognitive function. But is there enough evidence for these claims? Read on to find out!

Below are the main ingredients found in the HVMN Kado formula:

(Note: Dosages are based on the serving size, which is two soft gels).

The first ingredient listed on HVMN Kado is the all-important vitamin D. Vitamin D essentially acts as a hormone in the body, where it has a number of roles. For example, it has neuroprotective effects and is necessary for cognitive function. Research shows that low vitamin D status is related to poorer cognition and a much higher risk of dementia, but supplementation doesn’t clearly decrease these risks.

Vitamin D is also necessary for strong bones, but research shows that, unless you’re deficient in vitamin D, supplementation is unlikely to offer any benefits to bone and overall musculoskeletal health. With that being said, many people are deficient.

Additionally, vitamin D plays a few roles in the cardiovascular system, and low vitamin D status is associated with an increased risk for a number of heart health problems, such as hypertension. However, it’s still unclear as to whether or not vitamin D supplementation directly benefits heart health as there are conflicting results.

Based on the research, the dosage needed for improved health should be at least 800 IU daily, but it depends significantly on one’s individual status.

Another vitamin in HVMN Kado is vitamin K, which is actually further broken down into vitamin K1 (phylloquinone) and K2 (various menaquinones). Vitamin K plays many roles in the body, such as in blood clotting, healthy bone formation, regulating calcium levels, and in controlling inflammation, among other things.

Deficiencies in vitamin K are associated with many degenerative diseases, such as cardiovascular disease (CVD), arthritis, dementia, cognitive impairment, and frailty, which indicates vitamin K’s importance in a variety of bodily systems.

Overall, the research shows that vitamin K supplementation can decrease CVD risk, improve some aspects of cognitive function, and decrease inflammation. Also, vitamin K may have a synergistic effect when combined with vitamin D, especially in regard to bone and joint health.

Finally, the form of K2 uses, MK-7, is shown to be the most bioavailable and thus can deliver greater effects than other forms.

Up next are the omega-3 fatty acids EPA and DHA, which I’m sure nearly everyone has heard about by now. The omega-3 fatty acids play numerous roles in the body, including in cardiovascular health, cognitive function, mood, and inflammation. However, mainly EPA but not DHA has been shown to have the most beneficial effects in regard to decreasing depression and minimizing cardiovascular disease risk.

Continuing, omega-3 fatty acid supplementation appears to decrease various markers of inflammation. And both EPA and DHA supplementation may be able to minimize cognitive decline and promote brain health/function, such as in memory and executive function, although the effects depend on baseline levels of fatty acids.

Overall, EPA/DHA appear to benefit a number of areas in human health, although their total effects depend on how low one’s status is, to begin with. But since many people are deficient in omega-3s, supplementation will likely help.

There are a wide range of doses and no specific recommendations, but adults should get at least 250 to 500mg daily of EPA/DHA combined. These requirements can be much higher for those with various conditions (e.g., neuropsychiatric, cardiovascular) and for people with a history of omega-3 deficiency/suboptimal intake.

The final ingredient in HVMN Kado is astaxanthin, which is a carotenoid found naturally in various plants and animals. Astaxanthin is a potent antioxidant and anti-inflammatory, and it also plays a role in overall cellular health and function as well as fat metabolism. Overall, research shows that astaxanthin supplementation is likely beneficial for cardiovascular health, neurological and cognitive function, skin and eye health, immune health, and more! Beneficial doses typically range from 4 to 12mg daily.

Overall, HVMN Kado looks like a solid supplement with a wide range of potential benefits. All of the ingredients in here are well-researched and proven to offer a number of health benefits, such as in cognitive function, cardiovascular health, joint and bone health, and mood.

Additionally, the dosages used for most of the ingredients are at effective levels, although ideally, the dose for astaxanthin would be higher.

Another benefit is that some of these ingredients work better together. For example, vitamin D and vitamin K can have synergistic effects. And since these vitamins are fat-soluble, omega-3 fatty acids may further enhance their absorption and bioavailability, leading to more pronounced benefits.

However, some of the research isn’t fully conclusive. And another thing to consider is that a lot of these supplements work better as protective agents rather than health-boosters. What I mean by that is the effects of these supplements on preventing various issues are likely greater than their effects on promoting optimal health. For example, this product is likely better for preventing cognitive decline than for enhancing cognition. The health-boosting effects likely will still occur, it’s just unclear to what degree.

So, HVMN Kado can most likely stand by its claims since it really doesn’t advertise any miraculous benefits. All that’s stated is that HVMN Kado will support brain, cardiovascular, bone, and heart health as well as support cognitive protection. And based on the research, these are likely all true.

But remember the proposed benefits. They’re not saying that HVMN Kado will suddenly enhance your memory or cognitive function, or greatly improve bone/joint health and mobility, or take your heart back to the level it was when you were 20.

What they are saying, and what is supported by research, is that HVMN Kado will help reduce the risk for various degenerative diseases and ill health in general, such as cardiovascular disease, cognitive impairment, and frailty.

Who is HVMN Kado Best For?

Given its specific benefits, HVMN Kado is likely best for people who are deficient in any of these ingredients and/or who want to prevent various degenerative diseases. In practice, this means that HVMN Kado is best for middle-aged to older individuals simply because they are at a greater risk for deficiencies and suboptimal health.

Make no mistake, though, this product could be used early on in your life if you are already facing suboptimal health. Given that many people are deficient in vitamin D and omega-3 fatty acids, this could be a potential supplement to help fill those gaps.

With its modest dosages, HVMN Kado is unlikely to pose any major side effects, but here are some possible ones:

Also, HVMN says that implement a robust scientific validation process for the effectiveness, legality, and safety of their products. All ingredients are vegan, gluten-free, and free from all major allergens. Additionally, the ingredients in here are FDA Generally Recognized as Safe (GRAS) and allowed under all athletic body guidelines, including the World Anti-Doping Agency (WADA).

Where to Buy HVMN Kado

You can purchase HVMN Kado by going to the HVMN website at this link. 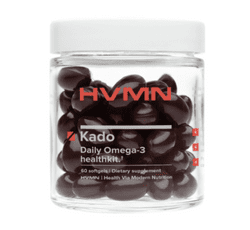 Get up to 10% off HVMN KadoWe scour the web for the best deals on supplements. Want to save up to 10% on your HVMN Kado order? Click the button below to get this deal!GET THE DEAL

So, HVMN Kado is slightly more expensive than some other products of a similar style but certainly in the normal price range.

OmegaWell Fish Oil Review – Is This LiveWell Supplement Worth The Price?

Nature’s Lab Magnesium Soothe Powder Review – Is It Worth The Cost?

NeuroActiv6 Review – Can You Trust This Product?

VitalFit Red Root Review – Should You Use This Pre-Workout Supplement?

Chill The F* Out Review – Does This Apothekary Supplement Work?

Relaxium Sleep Review – Can It Really Give You Better Sleep?