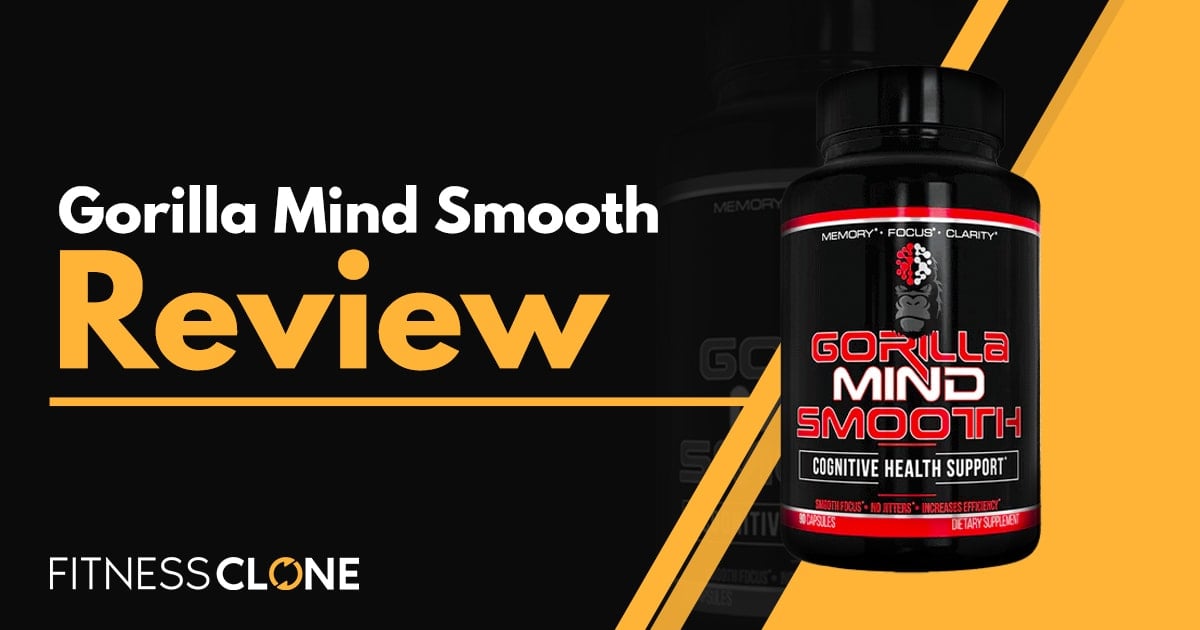 When it comes to the desire to increase energy, cognition, or alertness, many people turn to coffee and other highly caffeinated drinks, such as energy drinks. Yet, there are also many people who are sensitive to caffeine and other stimulants and want alternatives to these products.

Fortunately, there are a number of cognitive-enhancing supplements out there today that don’t contain any caffeine or stimulants. And we’re going to look at one such product called Gorilla Mind Smooth. In this Gorilla Mind Smooth review, we’ll dive into everything you need to know about this cognitive health supplement to see what benefits it may have for energy, cognition, and mental and physical performance. 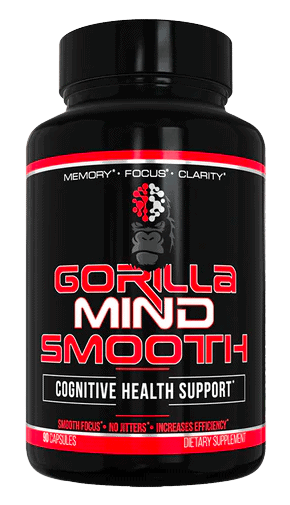 Gorilla Mind Smooth is a non-stimulant productivity supplement made and produced by Gorilla Mind. This supplement company is known for their wide range of different supplements, including Gorilla Mode Pre-Workout, Gorilla Mind Rush for brain health, Gorilla Dream for sleep and recovery, and many more.

Gorilla Mind Smooth is a cognitive health support supplement designed for people sensitive to caffeine and other stimulants. In fact, the makers say that it’s the best non-stimulant energizer out there. It is designed to provide a smoother, less extreme level of energy while still maximizing focus, mental clarity, and other cognitive functions.

It contains various herbal extracts and other ingredients designed to increase neurotransmitters and other brain chemicals responsible for focus, mood, creativity, and more, all without the crash.

There are many different benefits advertised with Gorilla Mind Smooth. These include: 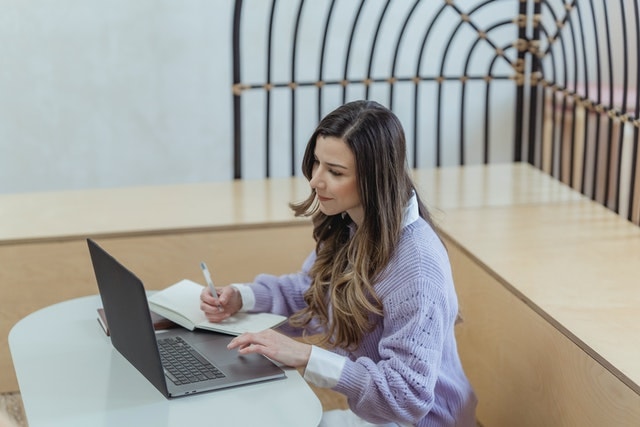 Gorilla Mind Smooth is designed to be fast-acting, yet also long-lasting. And users are supposed to expect increases in focus and concentration in as little as 15 minutes, with these effects lasting up to 8 hours. Alpha-GPC and HuperIne A are just some of the ingredients involved here.

With an increased ability to focus and concentrate, your ability to retain information and memorize things is also supposed to increase, reaching peak levels at 1 to 1.5 hours in and lasting for around 5 more hours.

Gorilla Mind Smooth is also advertised to improve your mood and well-being with ingredients such as theanine and tyrosine, especially 90 minutes after consuming it and up to 4 or 5 hours more.

You are also supposed to get a boost in creativity and overall cognitive processing, again with these effects peaking at around 90 minutes and lasting 4 to 5 hours more. Theanine and others are involved here.

The makers of Gorilla Mind Smooth also note that it can be paired with their pre-workout to enhance strength by increasing acetylcholine levels and ramping up the nervous system.

But can this non-stimulant formula really enhance cognitive performance and overall mental functioning? Read on in this Gorilla Mind Smooth review to find out!

Gorilla Mind Smooth comes in capsule form, and the serving size is 3 capsules, although they list the amounts for both 3 and 6 capsules. Regardless, below is what’s in each 3-capsule serving: 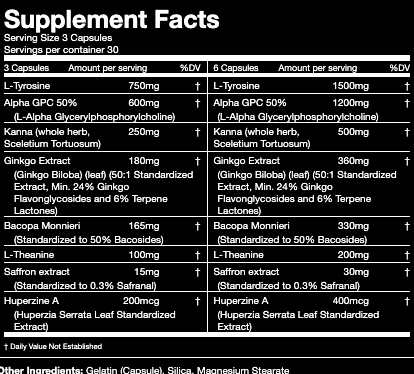 First, let’s look at tyrosine, an amino acid. It is a precursor to dopamine and norepinephrine, which are two important neurotransmitters for mood and cognitive function, among other things. Research shows that highly cognitive demanding and/or stressful tasks can deplete dopamine and norepinephrine, so tyrosine can help replenish these levels and thus improve cognitive function, as most research shows.

You usually need at least 1 gram of tyrosine, sometimes up to 10 grams or more, for the most benefits.

Up next is Alpha-GPC, which is a specific form of choline. When ingested, it ultimately helps to increase levels of acetylcholine, which is a neurotransmitter responsible for focus, memory, and concentration. Plus, acetylcholine is needed by the muscles to drive the strength of muscular contractions.

Alpha-GPC does have research showing its benefits for improving dementia and other cognitive disorders. And some studies show it can provide a few benefits for cognitive and physical performance in healthy individuals, although more research is probably needed.

Typically, at least 300mg is needed, with 600mg or more being the most beneficial.

Also included in Gorilla Mind Smooth is Kanna, an ingredient not found very often in other products. Kanna is a South African plant that has been used for many years in indigenous medicinal/healing practices.

And research is now confirming what those tribes already knew. For example, various bioactive compounds in Kanna have been studied to reduce depression, anxiety, and stress, and promote a greater sense of well-being, largely due to its ability to increase GABA, serotonin, and opioids.

Another plant extract in here is Ginkgo biloba, which is a leaf extract from the Ginkgo tree. Research shows that various compounds in Ginkgo can dilate blood vessels and increase cerebral blood flow, which may enhance cognition. Plus, Ginkgo can reduce free radical formation and possibly increase levels of some neurotransmitters.

Research shows that Ginkgo is protective against Alzheimer’s and dementia, possibly by reducing neurotoxicity and beta-amyloid buildup in the brain. As for healthy individuals, there is somewhat conflicting research, but Ginkgo has sometimes been shown to improve cognitive function.

An herb often used in Asian cultures, bacopa monnieri has long been known for its memory-boosting properties. Various compounds in it (such as bacosides) are able to protect against oxidative stress and overall neurodegeneration. Plus, bacopa is able to increase brain-derived neurotrophic factors and possibly stimulate synaptic connections between neurons.

And although there needs to be more research, bacopa monnieri shows initial promise as a learning and memory booster and may even have a role as an anti-depressant.

Also in Gorilla Mind Smooth is theanine, an amino acid commonly found in tea leaves. Theanine itself may very well be responsible for the “smooth” part of this supplement’s name since it can increase GABA, serotonin, and dopamine, while also increasing alpha waves, all of which lead to feelings of calmness and relaxation yet also alertness.

Theanine has been found to be a solid cognitive enhancer, such as for attention, memory, and alertness. And it is also able to reduce stress and anxiety when faced with stressful situations.

Up next is saffron, which is a flower-derived spice. Saffron has many bioactive compounds, such as crocin and safranal, that exert many brain health benefits. For example, saffron largely acts as a neuroprotective by reducing oxidative stress, neuroinflammation, and related pathways. Plus, it may be able to increase levels of GABA and serotonin, among other neurotransmitters involved in mood and well-being.

Overall, the current research shows saffron is beneficial for decreasing anxiety and depression as well as protecting against cognitive impairment, although it’s unclear if it benefits cognitive function in healthy people.

Most studies use around 30mg per day.

The final ingredient in Gorilla Mind Smooth is Huperzine A, which is an extract from the Huperzia Serrata plant found in India and Southeast Asia. Huperzine A decreases acetylcholinesterase, which ultimately leaves more available acetylcholine in the brain. Plus, it reduces oxidative stress and other markers of neuronal damage.

Most of the research has been done in Alzheimer’s and dementia patients, where it has seen positive effects. But it could benefit healthy people too by increasing focus and concentration, but this isn’t definitive just yet.

Overall, Gorilla Mind Smooth should be a pretty effective cognitive and mental performance enhancer. Most of the ingredients are proven to work, although some ultimately need more evidence behind them. But even still, every ingredient has properties that could at least theoretically improve cognitive function (if it’s not already definitive). 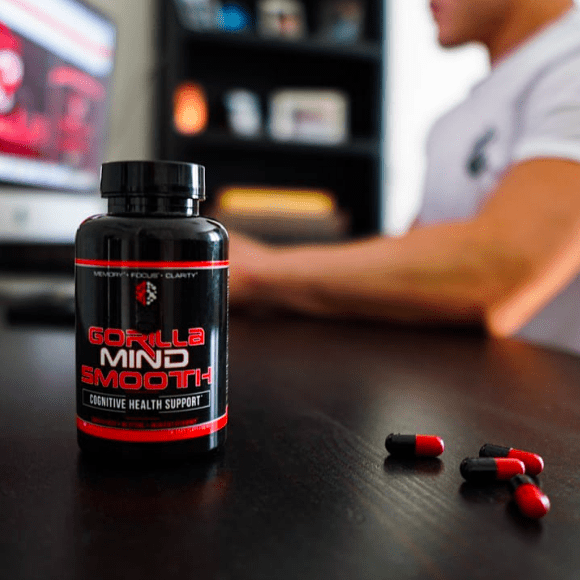 You’ve seen how these ingredients can protect against neuroinflammation and oxidative stress, increase neurotransmitters (e.g., serotonin, acetylcholine, dopamine, GABA), and increase cerebral blood flow, all of which should promote better cognitive function and mental performance.

Tyrosine, theanine, Ginkgo, and saffron are particularly beneficial here since they have the most research in healthy people. And the other ingredients, such as Alpha-GPC, could very well work, too, based on what we know they can do; it’s just that most of the studies have been done in diseased patients.

Also, one downfall of Gorilla Mind Smooth is the somewhat low dosages for a few of their ingredients, such as theanine, tyrosine, saffron, and bacopa.

Now, they do also list the dosages for 6 capsules, and these fall more in line with the research. So, consider taking 6 capsules instead of 3 if you’re looking to fully maximize cognitive performance.

So, in terms of the claims made by Gorilla Mind Smooth, you have to be a little careful because they outlined a specific timeline of benefits. It is generally known that most of these ingredients start to work within a half hour or so and can last up to 5 hours or more, so this is generally in line with what the makers of Gorilla Mind Smooth claim.

And as far as effectiveness goes, Gorilla Mind Smooth definitely should work decent, especially if you take 6 capsules instead of 3.

You’ll likely get a slight boost in focus, concentration, mental clarity, and creativity due to tyrosine, theanine, and Ginkgo.

Plus, theanine, Kanna, saffron, and even bacopa may improve mood and well-being while reducing stress, anxiety, and depression. And tyrosine can reduce stress too.

As for information retention and memory, you might get a slight boost due to the acetylcholine enhancer such as Alpha-GPC and Huperzine A but remember that not much research has been done in healthy people, so this isn’t definitive.

Finally, I wouldn’t expect much of an increase in strength if you combine Gorilla Mind Smooth with a pre-workout since Huperzine A and other acetylcholine-enhancers haven’t been definitively proven to increase exercise performance.

In sum, I’d expect Gorilla Mind Smooth to deliver slight improvements in mood, focus, concentration, well-being, creativity, and mental clarity, along with mild reductions in stress, anxiety, and even depression. And while there is no definitive timeline for these, it is generally known that they start to work within a half hour and can usually last around 5 hours or so, depending on the individual.

Who is Gorilla Mind Smooth Best For?

Just like Gorilla Mind states, Gorilla Mind Smooth is definitely best for people who want a boost in cognitive function, and mental performance yet are sensitive to caffeine and other stimulants. You might think that without caffeine or other stimulants this product really won’t work, but the ingredients included in this formula should be great alternatives as energy-enhancers and cognitive optimizers for people who need such a product. 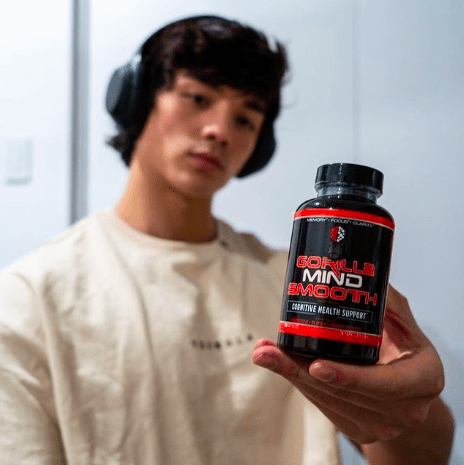 While Gorilla Mind Smooth should generally pose little to no risk for most people, below are some possible side effects:

Where to Buy Gorilla Mind Smooth

Are you interested in giving this stimulant-free cognitive-enhancer a shot? You can buy Gorilla Mind Smooth on the Gorilla Mind website at this product link. 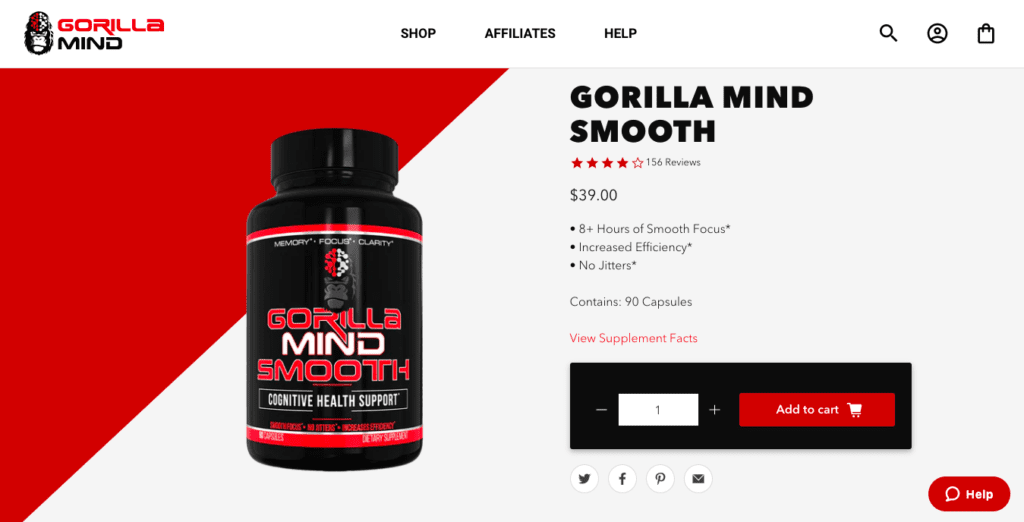 Each bottle of Gorilla Mind Smooth has 30 servings (90 capsules), or 15 capsules if you take a double dose. The price per bottle is $39. So, that’s $1.30 per serving if you take 3 capsules, but remember that the dosages are more effective if you take 6 capsules, but that’d bring the price per serving way up to $2.60. I’d recommend that you start with 3 capsules of Gorilla Mind Smooth to see if that’s enough for you and only go up higher if you really need to (but up to you, of course!).

Microbiome Plus+ Review – Is It Worth The Money?

Natural Stacks Max DHA Krill Oil Review – Is This Supplement Right For You?

Healthycell Focus + Recall Review – A Look At This Nootropic