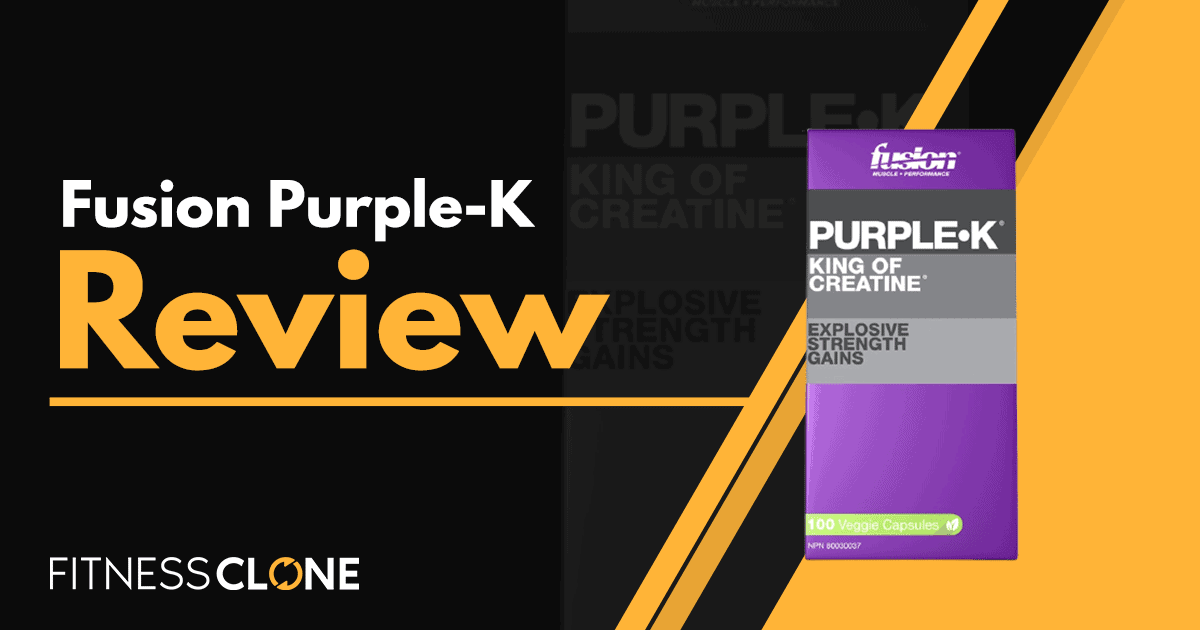 In the world of workout supplements, creatine is one of the most popular (and most studied) supplements on the market. If you are looking for an edge to gain muscle & strength, chances are you have heard of creatine or maybe even tried it yourself.

Due to its popularity, there are tons of creatine supplements on the market, each claiming to be better than the rest. Fusion Purple-K creatine, which boldly claims the title “King of Creatine,” is no exception.

The question is – what makes Fusion Purple-K different from other creatine products? And do those differences really make it better and more effective than the rest? Let’s find out the answer to those questions and more in the Fusion Purple-K review! 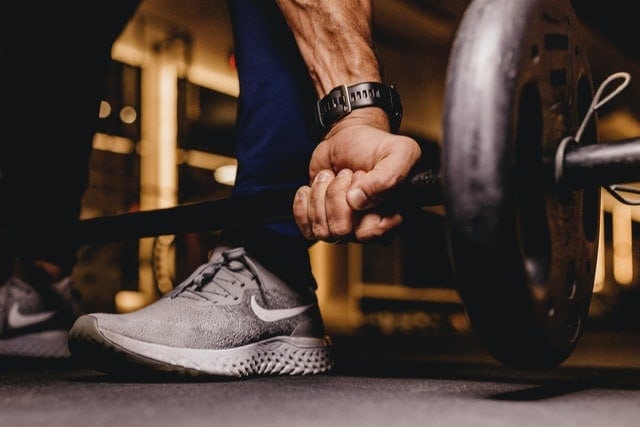 First of all, what benefits should you expect from adding Fusion Purple-K and creatine to your supplement line-up?

Creatine is one of the most extensively studied, natural workout supplements out there. Research has repeatedly shown that taking creatine consistently leads to increases in strength, aerobic capacity, and lean muscle mass. The one caveat is that these benefits come when creatine is taken in conjunction with resistance training and/or high-intensity aerobic training. 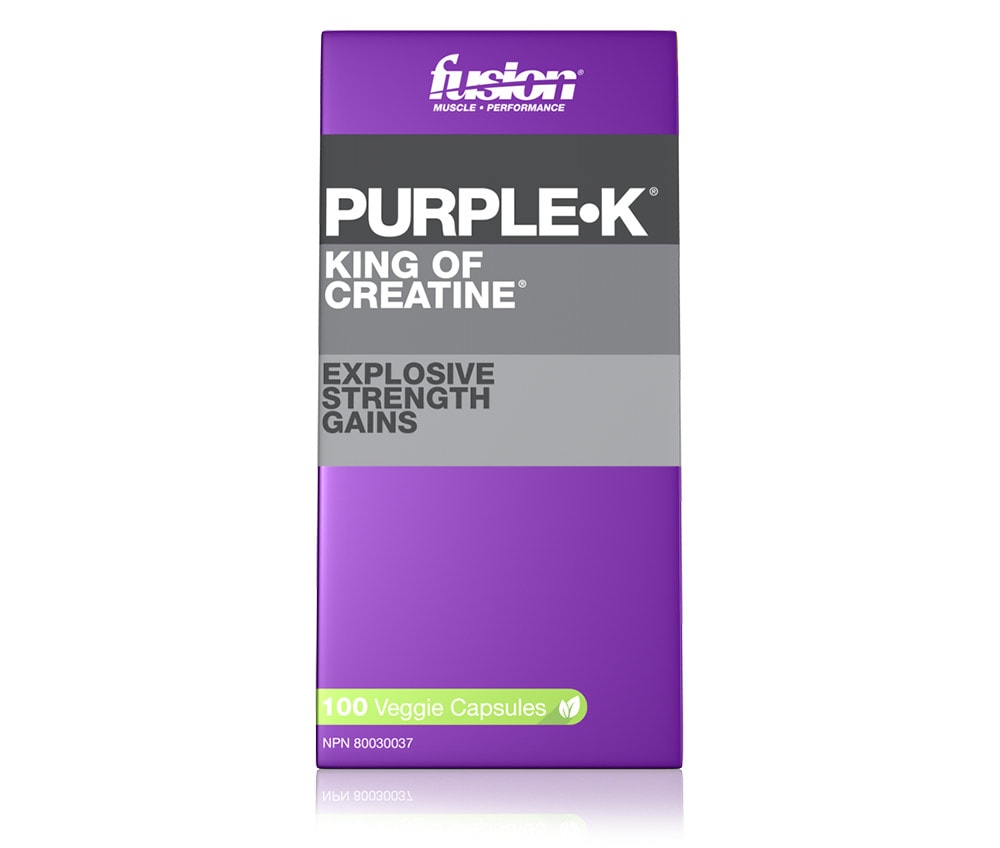 This is due to the mechanism in which creatine produces gains. Creatine may lead to faster regeneration of ATP (the energy unit of the cell) between bouts of exercise. This means quicker recovery between training sets and the ability to do more work, in less time. This increase in work capacity leads to more adaptation.

So it is important to understand that taking creatine ALONE will not lead to muscle gain. Instead, creatine may allow you to train harder and recover faster, which is what brings about the gains.

The main ingredient in Fusion Purple-K is Kre-Alkalyn. Below we will take a closer look at this ingredient and its purpose. 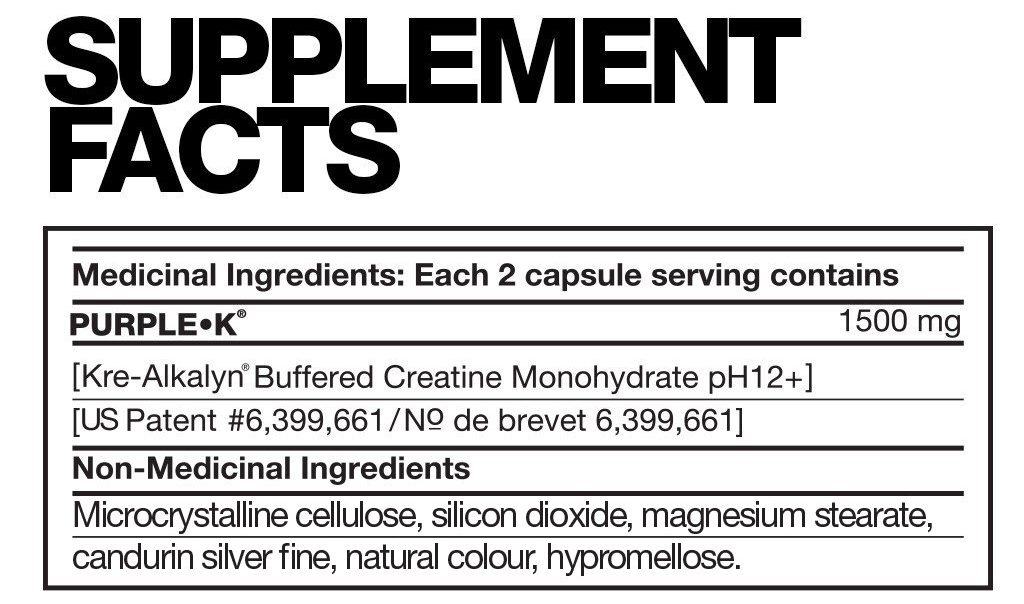 The “K” in Fusion Purple-K is likely referring to the specific type of Creatine used in this product – Kre-Alkalyn. Kre-Alkalyn is a new kid on the block, relatively speaking, compared to the traditional creatine monohydrate that has long been the standard of creatine supplements.

The website also goes on to explain how other creatines are unstable, and break down into a useless waste product called creatinine when mixed with water. Purple-K, however, does not. Therefore Purple-K claims to provide more benefit for the same dosage compared to any other creatine.

These ingredients are not imperative to evaluating the effectiveness of Fusion Purple-K. They are present in small, safe amounts and form the veggie capsule, as well as help it stay together for deliverability.

The short answer is… Yes.

Luckily, many studies have been done on the effectiveness of creatine, and even some comparing Kre-Alkalyn to more traditional forms like Creatine Monohydrate. You may be thinking, “of course creatine works; we already knew that.” But what may be more surprising is that Kre-Alkalyn has repeatedly outperformed creatine monohydrate in clinical studies.

Like this one here that demonstrated significant improvements in the vo2 max of olympic swimmers in the kre-alkalyn group vs. the creatine monohydrate group. Or this double-blind study in weightlifters in which the kre-alkalyn group observed a 28.25% increase in their total lifts over the control group.

Who is Fusion Purple-K Best For?

Anyone who is looking to increase their strength, build more muscle, or gain a competitive edge in their sport would benefit most from this product. Since Purple-K is designed to increase performance in short, powerful instances – long-distance athletes may not experience as much benefit from Fusion Purple-K.

Even if your goal is just to lose weight and look better naked, Fusion Purple-K could be a valuable supplement to add to your arsenal. Building lean muscle does help accelerate the fat loss process, and supplementing Purple-K in combination with your training can help you do just that. 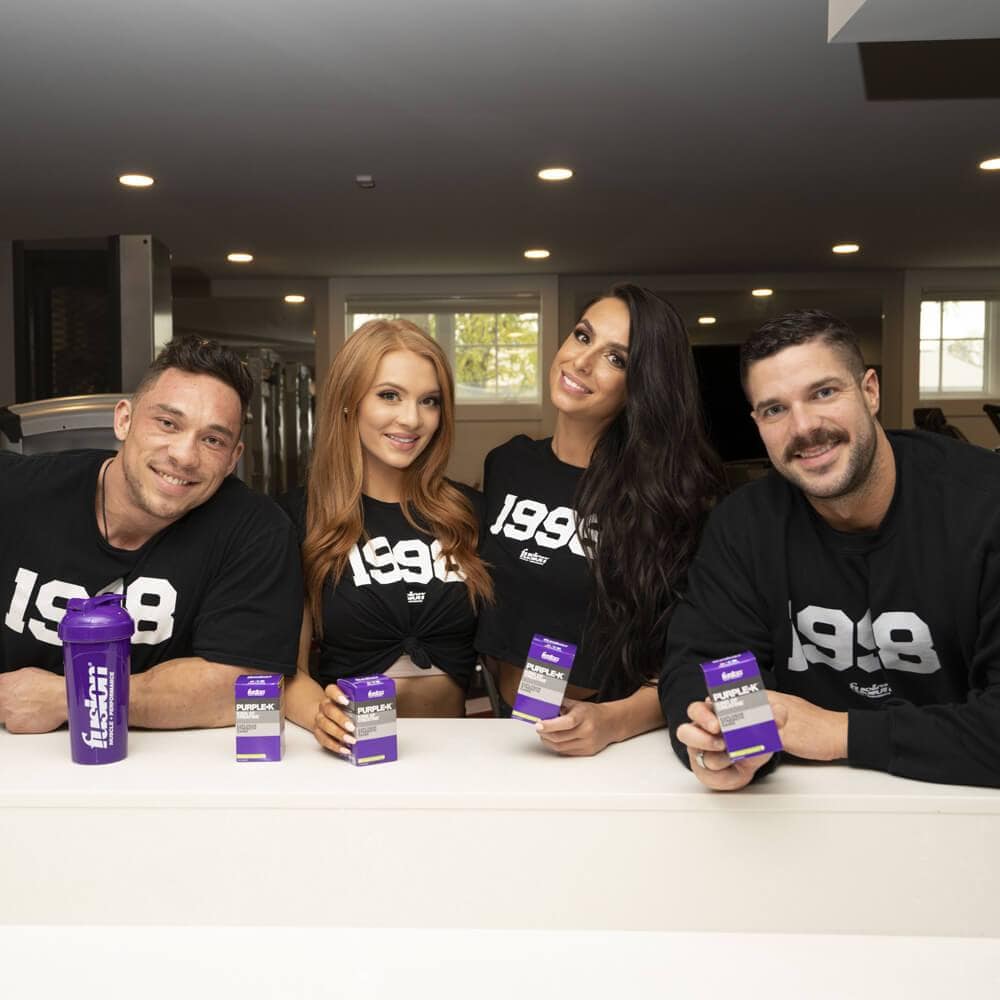 So we’ve determined that Purple-K may be effective at improving strength, body composition, and performance. But how effective is it really? This is where good marketing often embellishes claims and makes products seem “too good to be true.” So what are the claims on this particular product?

Truthfully, Purple-K really does not make any outrageous claims about their product. Under benefits, here is some of what’s included on their website:

“Optimized Muscular Energy & Enhanced Muscle Pumps” – This checks out. Kre-Alkalyn increases creatine stores in the body and increases the speed in which ATP regenerates. Meaning, you can perform more reps than you normally could.

“Explosive Strength” – Yes. Faster recovery between sets also means that you can maintain a higher intensity longer into your workouts.

“Therapeutic Dose” – Now, this one may be more up for debate, only because studies done on the effectiveness of creatine often involve taking a higher dose than what is typically recommended. For example, the recommended dose of Purple-K is 1500-3000mg. This is less than half of the 7500mg dose that was used in most studies that showed significant results.

All in all, the claims made by Purple-K are reasonable and backed by science. They don’t throw out any specific or crazy statistics promising 500% gains or adding 50 pounds to your bench press in 30 days. In an industry where companies prey on consumers’ egos with false promises of easy six-packs and guaranteed results – that’s something we can all appreciate.

Unlike some other creatine formulas, kre-alkalyn is a patented version and is generally considered a safe, natural option among performance-enhancing supplements. With that being said, there are always some potential side effects to consider.

The main side effect associated with any creatine supplement is dehydration. This is because while taking creatine, your muscles will draw water from other areas of your body. You should aim to consume half of your body weight in ounces of water per day, even if you are not taking creatine. If you are, you should consider drinking more – up to a gallon of water a day. 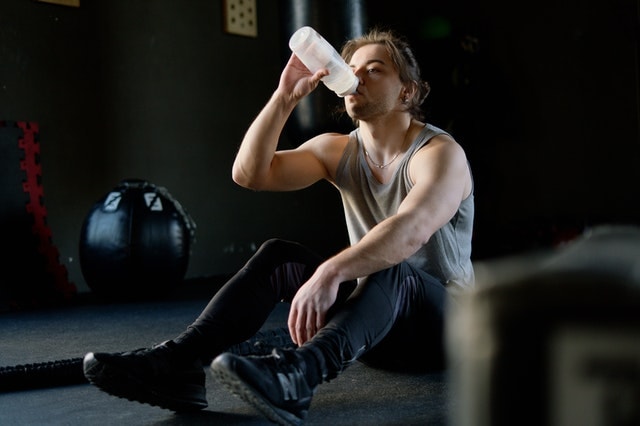 Another side effect of taking creatine could be putting on a couple of pounds in the form of water retention. This weight gain would quickly disappear if you discontinued use and could be avoided in the first place by drinking enough water!

An extremely rare side effect would be damage to the kidneys or liver. This has been associated with taking very high levels of creatine over a long period of time, and often with pre-existing conditions present. If you have a history of kidney or liver dysfunction, then you should consult a professional first.

Where to Buy Fusion Purple-K

You can buy Fusion Purple-K directly from their website here. It can also be found on Amazon at a slight discount, and probably arrive faster. However, buying directly from the manufacturer probably helps a health-oriented company grow and help more people, and doesn’t fund sending a billionaire to the moon. So, whatever your conscience deems appropriate! 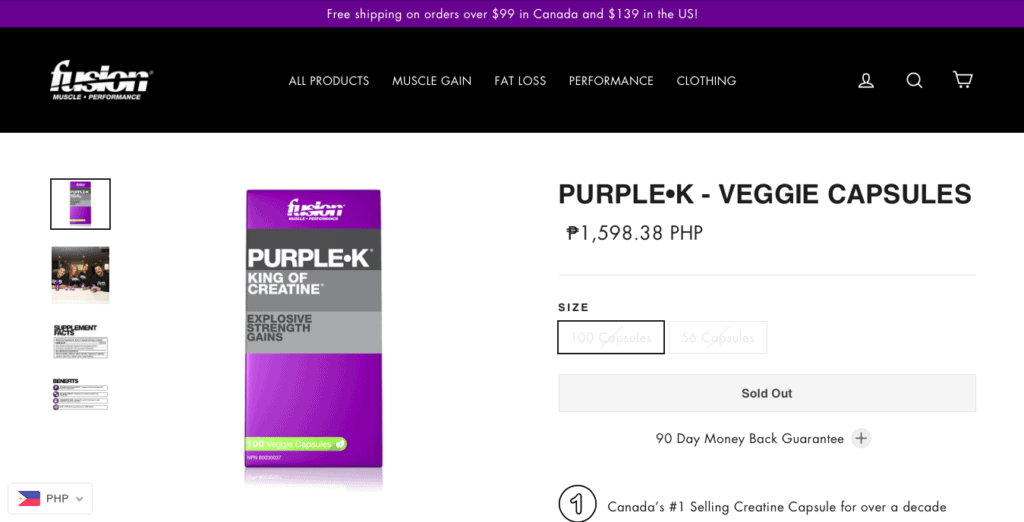 The main ingredient is Kre-Alkalyn, which has been researched more than most ingredients in the supplement industry. It even holds its own patent.

Additional ingredients that make up the veggie capsule are kept to a minimum. Other kre-alkalyn supplements include colored dyes like RED #40 or BLUE #1, which may be toxic. It’s controversial at the least, so might as well keep them out.

Does Fusion Purple-K have the right ingredient dosage?

The dosage of 1500mg per serving is pretty standard among kre-alkalyn supplements. However, most studies determining its effectiveness were done using a lot more than 1500mg. Is it still effective? It’s likely. But you may need to up your dosage to get the full benefit this product can offer.

Directions state to take 1500mg before and after your workout on training days and once in the morning on non-training days. That’s only 2-4 capsules a day, which is not too much to ask. It’s also a lot easier than mixing a 5g scoop of powder in liquid like most creatine monohydrate supplements require.

Fusion Bodybuilding is a science-based, no-hype type of company. They have a real passion for bodybuilding and helping others experience success. All of their products are produced in a cGMP facility which means they follow strict, government-enforced policies. Fusion doesn’t make unrealistic claims about their products and promotes real health first through good nutrition, sleep, and smart training practices.

The philosophy behind Fusion seems to be solid, but they do lack real client testimonials. Most of their products on their website or Amazon feature little to no customer reviews. So while their brand seems trustworthy, they don’t have many testimonials from real users sharing their experiences.

How does Fusion Purple-K compare to alternatives?

Is Fusion Purple-K a good value?

There are some similar supplements that are cheaper, and a lot that are more expensive. When considering the price of Purple-K with the potential benefits of taking it, it’s only a measly $25 a bottle for something that could potentially make you stronger, faster, and better looking. Not bad!

A bottle of 100 capsules will last 25-30 days when consuming the recommended dose of 3000mg on training days and 1500mg on non-training days, if you are working out 4-5 days a week.

Is Fusion Purple-K worth using?

As far as performance-enhancing supplements go, creatine is one of the most-studied ones out there. Its risks are relatively low with a potentially high upside. It’s not very expensive, and it’s easy to take. On top of that, there is reason to believe that Purple-K’s creatine could be more effective than traditional creatine supplements containing non-buffered creatine monohydrate.

At the end of the day, there is more to gain than lose by trying this product. Like with all supplements, they will be most effective when used alongside a consistent training and nutrition regimen. There is no such thing as a magic pill! But there is also a reason why creatine has become a staple in so many training regimens, and Purple-K is up there with the best of them!

Invigor8 Review – Does This Superfood Shake Stand Up To Its Claims?

Prime Male Review – A Look At This Natural Testosterone Booster

Performance Lab Mind Review – Is This The Right Nootropic For Your Needs?

OptiBac Probiotics For Women Review – Is This Live Cultures Supplement Worth It?