CON-CRET Creatine Review – Is It Really Worth The Purchase? 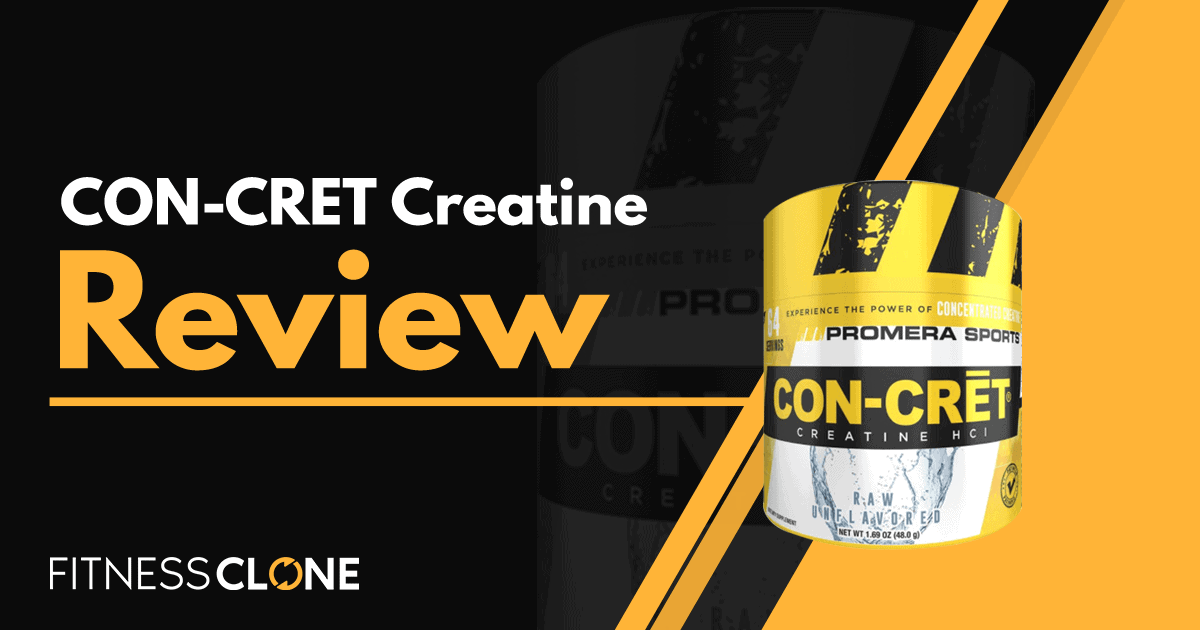 Having been around since 1935, GNC knows a thing-or-two about supplements. This includes their answer to your need to get big in the gym using all-natural compounds like creatine—an amino acid known to help you work out longer and harder while recovering more quickly. It’s called CON-CRET Creatine!

You may be familiar with some of GNC’s other supplements, such as Nugenix GH-Boost, Pro Performance Bulk 1340, or Mega Men Sport; but how does their CON-CRET Creatine truly measure up? They claim their creatine has superior bioavailability, and by micro-dosing according to bodyweight, you can avoid the need to load or cycle. They also claim theirs has no concerns with cramping, bloating, or water retention.

Is it all true? Let’s have a look in this review of CON-CRET Creatine!

Though most of the creatine on the market today is creatine monohydrate, it isn’t the most absorbable form. Instead, CON-CRET Creatine uses creatine hydrochloride (HCL). HCL attaches a hydrochloride group to creatine, which enhances its stability and makes it easier to dissolve and more absorbable.

Plus, creatine HCL doesn’t cause the bloating and water retention that monohydrate does, not to mention it’s much easier on the stomach. This means you’ll look more shredded without the bloat, and the weight you gain you experience will be your muscles, not water retention.

That, and you’ll spend less time doubled over with stomach cramps!

CON-CRET Creatine provides a variety of benefits, including superior absorbability and no cramping. Below we will take a closer look at the main benefits of CON-CRET Creatine.

While most creatine on the market is in its monohydrate form, its hydrochloride form is more dissolvable in water. This not only enables better absorption rates, but allows you to micro-dose much more efficiently and save money since you won’t be flushing the excess down the loo!

Supplementing only works if you absorb what you’re taking. While creatine monohydrate and its other most-common form, anhydrous (as in, no water), are both absorbable, creatine HCL takes it a step further so that nearly all you consume is used.

This enables you to use less for even better results, since there are a few ways creatine monohydrate leaves us with something to desire.

For instance, some common side effects of creatine monohydrate are bloating, water retention, and gastric distress. That’s because it increases the water content of your cells, giving you that bloated look that hides cuts. While this does work to help you gain weight, it’s not muscles you’re gaining so much as it is water weight.

Plus, since loading with creatine often causes gastric upset that can include cramping, diarrhea, and vomiting, using the efficient, low-dose, HCL form of it alleviates these problems.

Though most creatine requires you to load with around 20-30 grams-per-day for around a week before backing off to a maintenance dose for another 4-6 weeks, cycling off, and doing it all over again, there’s no need with GNC’s CON-CRET Creatine. That’s because it’s much more efficient and absorbable so that along with no gastric upset, water retention, or other issues common with creatine monohydrate, you can micro-dose and avoid the complex need for figuring out ideal cycles and amounts to use.

Instead, you can simply use it as a daily supplement to enjoy all of creatine’s benefits, which include the formation of adenosine triphosphate (ATP), which plays a major role in providing cellular energy, and increased production of insulin-like growth factor 1 (IGF-1), which helps your muscles grow big and strong.

There’s only one ingredient in GNC’s CON-CRET Creatine formula, which is all you need to successfully energize your workouts and help you grow thick, dense, strong muscles. And by being creatine in its HCL form, there’s no need to load up on it while experiencing the stomach issues this causes, nor is there a need to add the complexity of cycling to your routine.

Instead, all you need is to know how much you weigh so that you can micro-dose according to your weight. This means using amounts low enough to avoid stomach cramps, etc., though high enough to get the results you’re looking for, which doesn’t take much since it’s so absorbable and efficient.

In fact, at least one study shows creatine HCL to be up to 38% more absorbable than other types of creatine.

No matter its form, creatine is one of the most popular supplements there is for athletes seeking more power, endurance, and strength. It can successfully increase your body’s ATP levels to give you plenty of stimulant-free energy and endurance, as well as boost your body’s production of dihydrotestosterone (DHT), which converts to testosterone. It also boosts levels of IGF-1, which is more commonly referred to as “growth hormone,” which, much like its name indicates, has a strong positive effect on muscle growth and recovery.

Altogether, this points to creatine in ANY form being an effective workout supplement, though since CON-CRET Creatine uses its HCL form, you reap these benefits with fewer—if any—unpleasant side effects.

Who Is CON-CRET Creatine Best For?

While gym rats and bodybuilders are the primary audiences for creatine use, they aren’t the only ones who can benefit from it. In fact, any athlete looking for more strength and power will be pleased with their results from this product—not to mention it won’t cause you to fail any blood tests!

These include endurance athletes such as cyclists, runners, and swimmers who can benefit from the energizing effects of more ATP in their systems. This helps them push past the bonk with power to spare, and the fact that micro-dosing with creatine HCL won’t weigh them down with excess water weight is an added bonus that can keep them scrawny, powerful, and fast.

The reality is that creatine itself has been around for a VERY long time, and has been used to successfully boost the endurance, power, and size of athletes for nearly as long as athletes have been seeking these types of advantages.

Even better is that GNC’s claims of there being no need to load or cycle, no gastric upset if used correctly, and better solubility and uptake all seem to hold true. This makes their product one of the best available, though we’d like to see the artificial flavors and yellow dye #5 removed since none of this should be in an otherwise healthy and natural product.

Creatine HCL removes the side effects common with most other types of creatine, and as long as you’re not sensitive or allergic to any of its ingredients and you stay within the recommended dosage, the only side effects you should notice are bigger, denser muscles, faster recovery, more energy, and better endurance.

Where To Buy CON-CRET Creatine

At $29.99 for up to 2-months’ worth, getting big, strong, and powerful won’t break the bank. Remember that GNC has been around for a VERY long time, and offering their customers great products at a good value is a big part of the reason why. If you really love CON-CRET, GNC also offers a subscribe and save option where you can save 10% and get free shipping! 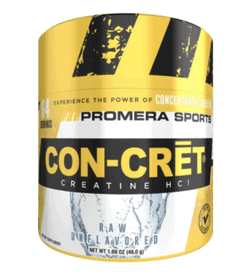 CON-CRET Creatine HCL can be purchased through GNC either on their website or in any of their more-than 4800 stores located throughout the US.

Nugenix Maxx Review – Is This Testosterone Booster Worth Using?

Wonder Arms Review – A Look At This Total Workout System

B4 Thermogenic Review – Can This Fat Burner Get Rid Of Unwanted Pounds?

Naked Greens Review – Is This Superfood Worth Trying?