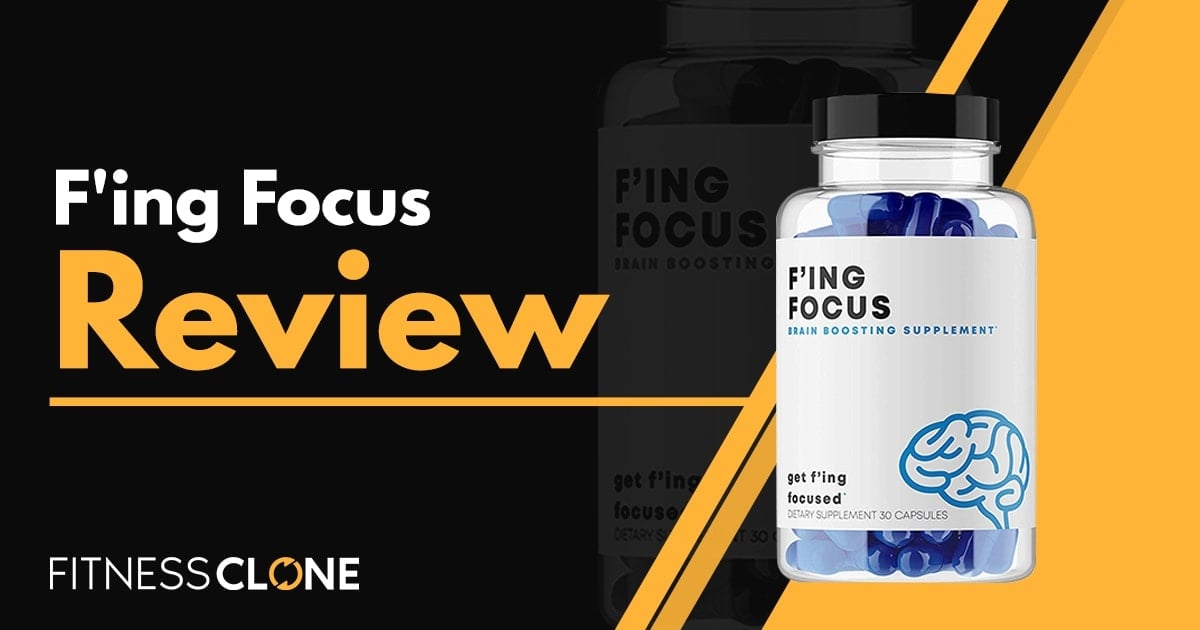 Nootropic supplements continue to gain waves in today’s society, full of consumers shopping for an effective brain-booster. If you haven’t heard of this craze, a nootropic supplement is one designed to enhance and improve your cognitive function. They are normally found in capsule or powder form.

With plenty of different brands and products available on the market today, finding a nootropic that will work for you can be difficult. While they claim to do the same thing at the core, they all use different ingredients and can potentially utilize harmful or unnecessary ingredients in their formula.

If you’re unsure of a product, take a look at the ingredient label. It will tell you all you need to know and what to expect.

What is F’ing Focus?

If we are giving awards to best product name in the nootropic market, I might have to give it to F’ing Focus. It’s a catchy name that they use in their marketing strategy to clearly detail what their product aims to do — help you f’ing focus.

Contrary to other nootropic supplements out there, F’ing Focus doesn’t waste time with claims or big guarantees. They keep it simple, I like that. They list 3 major benefits from taking their capsules:

If you’re looking for something that can deliver laser focus and motivation to work through your checklist of tasks, F’ing Focus could be the product for you. They claim their product can help anyone, including CEO’s, doctors, students, athletes, or just the average person looking to enhance their brain power.

Of course, we’ll have to take a look at the ingredients before we make any official judgments.

F’ing Focus utilizes a total of 9 ingredients in their formula, giving you a wide variety of benefits related to cognitive health and function. There are some ingredients that I would be careful with, though. Likewise, the effectiveness of the ingredients can depend on the user’s body, but the ingredients listed below will bring you cognitive benefit at some level.

Many people have heard of caffeine, but not caffeine anhydrous. Since the term “anhydrous” means without water, that means it’s simply dehydrated caffeine. By removing the water and other chemical components of caffeine, you end up with more concentrated caffeine.

For those that like the boost you receive from caffeine, this might sound amazing. Unfortunately, it does come with risk. F’ing Focus uses 150mg of caffeine anhydrous. Some studies indicate that anything above 200mg in 24 hours can bring negative side effects. There are even reports of deaths caused by overdosing on caffeine anhydrous by taking 2,000mg+ in a 24 hour period.

Although the 150mg is a safe amount for one serving, I wouldn’t take two of these in a single day. In fact, I wouldn’t advise taking them in back-to-back days either — just to be safe.

Alpha GPC is a well-known nootropic ingredient and is used in many different products on the market. It’s a choline-containing supplement with known cognitive benefits. Alpha GPC can not only enhance cognitive function, but also slow down cognitive decline.

Unfortunately, there are no scientific studies on humans to support these claims, just rodents. Plus, those studies only see the benefits with a dose of at least 1,200mg. That makes the 50mg in F’ing Focus almost irrelevant. Luckily, there are ways to get the choline you need through your normal diet, including eggs, beef, salmon, and other meats.

Hesperidin is a plant chemical mainly found in citrus fruits — in this case F’ing Focus used the orange peel. It is known to improve blood flow and can help protect the brain from stressors, but scientific research on humans is extremely limited.

If you eat citrus fruits and other vegetables containing hesperidin, the 50mg in F’ing Focus likely won’t make a difference. If you avoid these types of foods or struggle to add them to your diet, it could be a good addition — though you can likely double your intake of hesperidin in this case.

If 150mg of caffeine anhydrous wasn’t enough to give you a kick, F’ing Focus added 30mg of TeaCrine (also known as Theacrine). Theacrine is a naturally-made chemical very similar to caffeine.

Many studies point to an obvious increase in energy when theacrine is ingested via the mouth, but there isn’t a lot of proof that it can help cognitive performance. In some subjects, a small improvement in concentration was seen, but nothing crazy.

Also known as velvet bean or cowhage, mucuna pruriens is a leguminous plant that has been used for hundreds of years to treat Parkinson’s disease. It can potentially lower stress, improves your mood, boosts the libido, and enhance your focus.

It can also help regulate certain hormones in your body, including dopamine, testosterone, adrenaline, and noradrenaline.

Noopept has similar effects to Piracetam, but without the high dosage amounts — noopept is around 10-30mg compared to Piracetam’s 1,000-3,000mg. There are studies backing enhanced cognitive health and function, but those studies were with rodents and not humans.

Noopept is a cheap ingredient that may or may not improve your brain’s function, but won’t present any harm at 30mg.

If you enjoy the taste of black pepper, it’s likely due to the active ingredient BioPerine (or Piperine) found in the spice. This ingredient has several known benefits including an increase in nutrient absorption, improved metabolism, higher levels of dopamine and serotonin, better memory, reasoning skills, motivation, and a more effective immune system.

So far, this is the most scientifically-backed ingredient used in F’ing Focus.

Galanthus Nivalis is a beautiful flower known to contain the alkaloid galantamine, which is approved as a treatment for Alzheimer’s disease in over 70 countries. There are decades of scientific research to back the memory-boosting benefits it contributes to.

This flower has also been known to treat damage to the nervous system, which can limit cognitive decline. Love this ingredient in F’ing Focus.

Huperzine-A is an ingredient found in many nootropics as well as pre workouts, such as Woke AF. Extracted from the Chinese club moss plant, Huperzine-A is a chemical that can help with dementia patients, as well as improve memory and increase the levels of acetylcholine in the brain. It also has antioxidant properties and can promote long-term cognitive health.

Another solid ingredient included in F’ing Focus, but the 10mcg is a relatively small dosage and may not prove effective in some users.

Some nootropic supplements fail to properly label the ingredients and dosages of each ingredient — sometimes for fishy reasons. Luckily, F’ing Focus puts all of this right on the ingredient label so you can properly manage your intake.

Here’s a look at the dosages of each ingredient used:

As far as the packaging goes, they like to keep it as simple as their website. All it says is “Brain-Boosting Supplement” and “Get F’ing Focused” with a picture of a brain on the label. In the pictures on the website, it looks as if the capsules are blue, going along with the rest of their color scheme.

Simple, yet effective design. Again, great product name and catchy phrase to go along with it.

If you’re wondering how expensive F’ing Focus is, it’s relatively affordable compared to other nootropic supplements on the market. A one-time purchase of $30 will give you a 30-capsule bottle — costing you about $1 per capsule. You can save a little money by subscribing to a monthly delivery, which will cost you $24 per bottle.

Likewise, you can order it on Amazon Prime for $25 per bottle, but stock will be limited.

Earlier in this review, we detailed the three major claims that F’ing Focus makes on their website. The product was designed to improve mental clarity, focus, fatigue, and memory — without a crash.

After breaking down the ingredients, there’s definitely some hope here. I like the combination of Huperzine-A, mucuna pruriens, BioPerine, and Galanthus Nivalis to support cognitive health and function — though I’m a little unsure about the doses used.

The caffeine anhydrous and Teacrine will definitely give you an energy boost, but this boost might outweigh the cognitive effect. This has the makings of an energy supplement more than a nootropic. Either way, it will make you seem more alert and ready to take on tasks.

While we like F’ing Focus, there are alternatives out there on the market that may be worth a look as well.

Here are some alternatives to F’ing Focus:

Nooflow is a nootropic supplement that promotes higher levels of energy and vigor. We rate Nooflow highly at a 4.7 and they also offer a variety of prices. You can get one bottle of Nooflow for €39, two bottles for €69, or three bottles for €95.

Neuro-Peak is another nootropic that we liked, at a 4.6 rating. Neuro-Peak helps boost memory, focus, clarity and performance. They also offer a good price at $21.04 per bottle.

One last F’ing Focuse alternative is NooCube, which we gave a rating of 3.8. NooCube is a nootropic that blends several ingredients together with the goal of boosting your cognitive capabilities and memory. You can get a 60 capsule bottle of NooCube for $39.99.

It’s going to be difficult to find a nootropic supplement that won’t come with a healthy balance of pros and cons. Some nootropics use too many unnecessary ingredients, some use harmful ingredients, some don’t have enough dosage, there always seems to be something wrong with a supplement.

Although F’ing Focus won’t cause you any harm if taken as directed, there are some concerning qualities and I think they could’ve swapped some of the ingredients out for more proven ingredients like Rhodiola Rosea, Lion’s Mane Mushroom, or Ginkgo Biloba, or Bacopa Monnieri.

Still, not a terrible product and definitely worth a try for the price it sells at. It could prove beneficial in some users, but there are better and more effective nootropics out there.

Country Farms Super Greens Review – Is It Worth Using?

Keto Chow Review – Is This Meal Replacement Shake Worth It?

VitaLiver Review – Is This Supplement Worth Trying?

Perfectil Review – Will This Vitabiotics Supplement Benefit Your Beauty Regimen?

Thyro8 Review – Does It Actually Work?