NITROvit Review – Can This Nootropic Give You Better Focus? 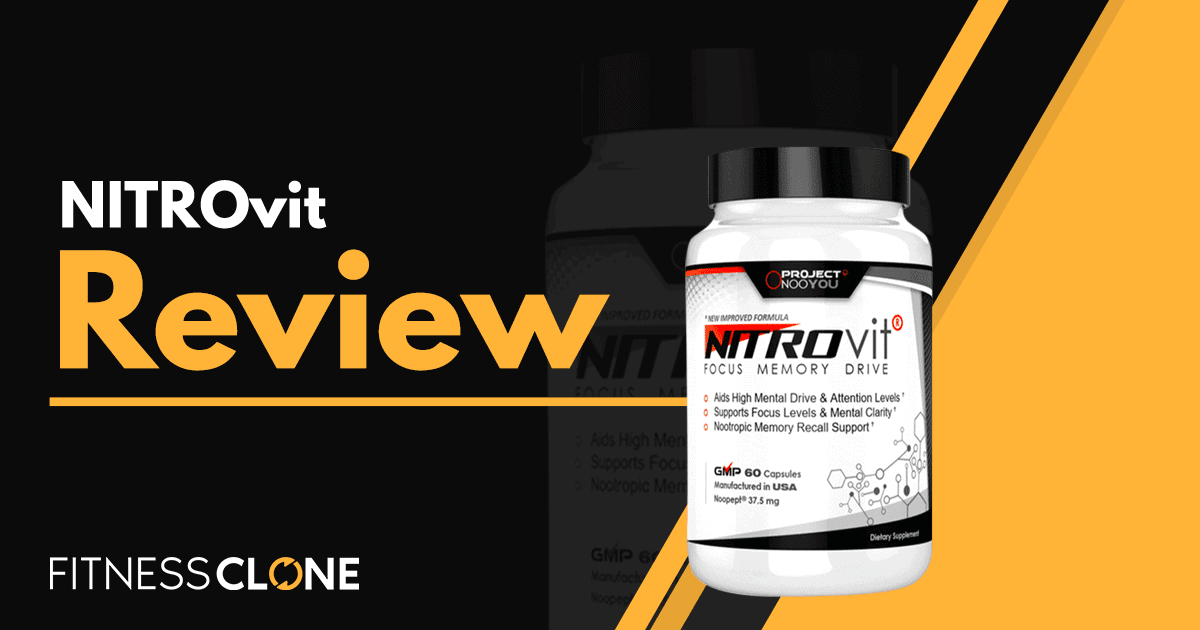 NITROvit is tailored for improving brain health and function. The supplement provides nutrients to supply neurotransmitters and streamline brain function. Antioxidants are included to ensure the brain is protected from free radicals and ward off inflammation. The nutrients and antioxidants aid in boosting brain processes, leading to improved energy and faster memory recall.

By taking the recommended dose of 3 capsules a day, the boost in motivation, memory retention, and the focusing abilities are just a few of the advantages NITROvit has to offer. There are many nootropics out on the market, such as Nooflow and Brain Force Plus, so is this nootropic really worth trying? We’ll examine NITROvit’s ingredients and their interactions with the brain in this review.

NITROvit is made by Project Noo You. The CEO and founder, Archie Marks, invented the supplement for himself. He struggled to stay focused and had distracting thoughts. Once he started learning about the abilities of nootropics, he wanted to create the best for himself. He did and named it NITROvit, which is manufactured in New York, USA.

The ingredients work together to enhance the brain’s cognitive function, to increase motivation, and to elevate one’s mood. When these ingredients are taken alone, they are not as potent. But, when the NITROvit supplement is consumed, the ingredients have the ability to build off one another to enhance the brain’s abilities, that is really where the magic begins. When taken properly, the dosage will be efficient, and the product should begin working within fifteen minutes. The ingredients that are in this supplement can be expensive by themselves. Considering the fact that they work best together, NITROvit is a fair price.

Vitamin B6 is naturally present in starchy vegetables, organ meats, and some non-citrus fruits. This vitamin helps support enzyme interactions in the brain. These interactions, which involve various transmitters, help to regulate sleeping cycles and mood. Vitamin B6 can also boost memory and alertness. This vitamin is also found in many other nootropic supplements, such as Focusene and Genius Joy.

Vitamin B12 occurs naturally in animal products. This vitamin helps to regulate mood. Depression symptoms can be aided when using Vitamin B12 since it helps release serotonin. Experts believe that memory can even be improved.

Alpha GPC is derived from sunflower or soy lecithin. It is used to promote neuronal cell health. With healthy neuronal cells comes an increase in learning capabilities, as well as a notable increase in short term and long-term memory.

Alpha Lipoic Acid is a sulfur-containing fatty acid. It is known to reduce toxicity in the body. Alpha Lipoic Acid can reactivate other antioxidants, assisting in the function of this supplement as a whole. Another positive attribute in that it is known to protect against stress on the brain.

BioPerine is found in black pepper.  It assists in the absorption of nutrients in the brain as well as the entire body. BioPerine assists the other nutrients in this supplement to be more easily absorbed.

Guarana Powder comes from a small fruit. It is full of antioxidants. These antioxidants heighten focusing abilities and increase alertness. Guarana acts like caffeine, but it provides mental alertness without a quick crash. This powder magnifies the ability to quickly make decisions.

Huperzine A is derived from Chinese club moss. It promotes the transmission of nerve impulses. These impulses are responsible for learning and memory. When the impulses are regulated, cognitive decline and memory loss can be prevented.

Taurine comes from amino acids. It encourages the muscles in the brain to work harder while simultaneously preventing damage to them. When adding this amino acid to a diet, it increases motivation and boosts focus. While your brain is focused, stress can be decreased.

Mucuna pruriens Extract is extracted from the velvet bean. This extract helps to elevate mood and calm nerves. It can be used to treat depression and increase both mental and physical performance.

Noopept can protect existing brain cells. It enhances the activity in your brain the regulates focus and mental function. This compound can replace sensations in the brain, such as lethargy and anxiety. Noopept is a cognitive enhancer with anti-inflammatory properties, which prevent damage to brain cells.

Phosphatidylserine is found in all cells of the human body. The focus is on alleviating stress and benefiting mood.  It increases the overall feeling of well-being. When consumed with the other ingredients, it helps mental performance.

Shilajit Powder can be found in mountain ranges such as the Himalayas. It is formed when mineral and plant material is broken down. This powder makes you feel more awake by increasing mental performance. It also reduces fatigue and increases alertness.

Uridine 5-Monophosphate is naturally occurring. It is one of the five forms of nucleotides found in nucleic acid. In the brain, it improves the environment for cell membranes to form. This nootropic enhances mental performance and reduces feelings of anxiety and stress.

There is a multitude of benefits this supplement has to offer. Three stand out: increased productivity, information retention, and elevated mood.

The combination of Noopept and Uridine increase motivation and lead to more productive days. Alpha GPC, Shilajit, and Guarana aid in mental clarity and keep the mind alert. Both Vitamin B6 and B12 allow one to focus more on what is going on at the moment.

Alpha GPC and Noopept support the neurotransmitters in the brain and help memory recall and memory formation. Huperzine A, Phosphatidylserine, and Mucuna work to accelerate learning and slow cognitive decline. The Vitamin B6 and Noopept enhance learning and assist with attention deficit disorders

Improved sleep quality and anxiety management come with consuming the combination of Alpha GPC, Taurine, Mucuna found in these supplements. Mucuna, Noopept, and Alpha GPC show anti-aging effects. The feeling of an uplifted mood and more physical energy comes from the combination of vitamins, antioxidants, and nootropics and specifically Noopept and Phosphatidylserine.

This supplement is ultimately worth buying if you are looking for better brain function, brain health, and an ability to focus. Here is the rundown. NITROvit works for most people. It contains natural extracts that support brain function and have been known to benefit short term and long-term memory. The cognitive protecting qualities which come from nootropics and antioxidants protect the brain from free radicals and oxidative stress. Amino acids and herbs support mental performance and can elevate any mood. Overall, the supplement contains well-studied ingredients and can aid in worthwhile mental health benefits.

NITROvit claims to work, and it does if it is used as suggested! In any given week, the supplement should be consumed for five days and not consumed for two days. This two-day period will allow the body to regulate back to its normal (not as optimal) function. If taken seven days a week (which is not recommended), then your body will adjust to a ‘new normal,’ and the consumption of the supplements will not offer the same level of brain function and clarity.

This product may seem like the final answer to all the brain fog and lack of alertness that is bothersome, but in reality, the effects it brings may change with time. Even the CEO tweaks the ingredients every other year or so. He claims that he is enhancing the supplement as he is learning more about different ingredients, thus changing up them up. With that being said, there are many costumers who have been using NITROvit. For over three or four years and claim that after trying other Nootropics, this is the one that continues to work.

Who Is NITROvit Best For?

This supplement is best for people looking for an added pep in their step. It is for those who lack focus and need mental clarity on a regular basis. Anyone who is studying for exams or looking to learn a bit of a new language before taking off for vacation can benefit. NITROvit offers better mental recall for studying purposes and accelerated learning. If you feel that you are not as productive as necessary or lack drive, this may be the right product for you. It also offers the added benefit of a mood boost.

This product has been made under the guidelines of the US Food and Drug Administration (FDA). For some, there is a possible concern that this product has not been evaluated by the FDA.

There are a few safety guidelines for NITROvit. People that have pre-existing medical conditions should consult their doctor before using this product, as they should with most supplements. This product is also not intended to be consumed by anyone under the age of 18 or by women who are pregnant and lactating.

There are no scientific studies done on NITROvit by companies outside of the Project Noo You Laboratory. However, the claims Project Noo You states about improved brain function and focus is supported by scientific research on each ingredient. This information is provided on their webpage, and these sources are from reputable scientific journals. With that being said, it leads me to believe their product is reputable. 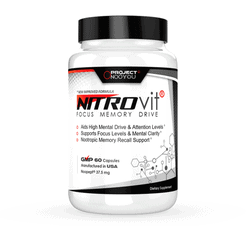 Best Deal on NITROvitWe scour the web for the best deals on supplements. Want the best price? Click the button below for the best savings!GET THE BEST PRICE

If you’re looking for a nootropic supplement to help support better brain function, brain health, and focus, then NITROvit may be for you. While there are no specific studies outside of Project Noo You, their ingredients do have solid scientific research backing them. Give NITROvit a try and get your brain health going!

Burn Lab Pro Review – Can This Supplement Burn Your Fats Away?

Royal Collagen Review – Does It Deserve A Seat On The Throne?

MigreLief Review – Can This Supplement Relieve Your Migraines?