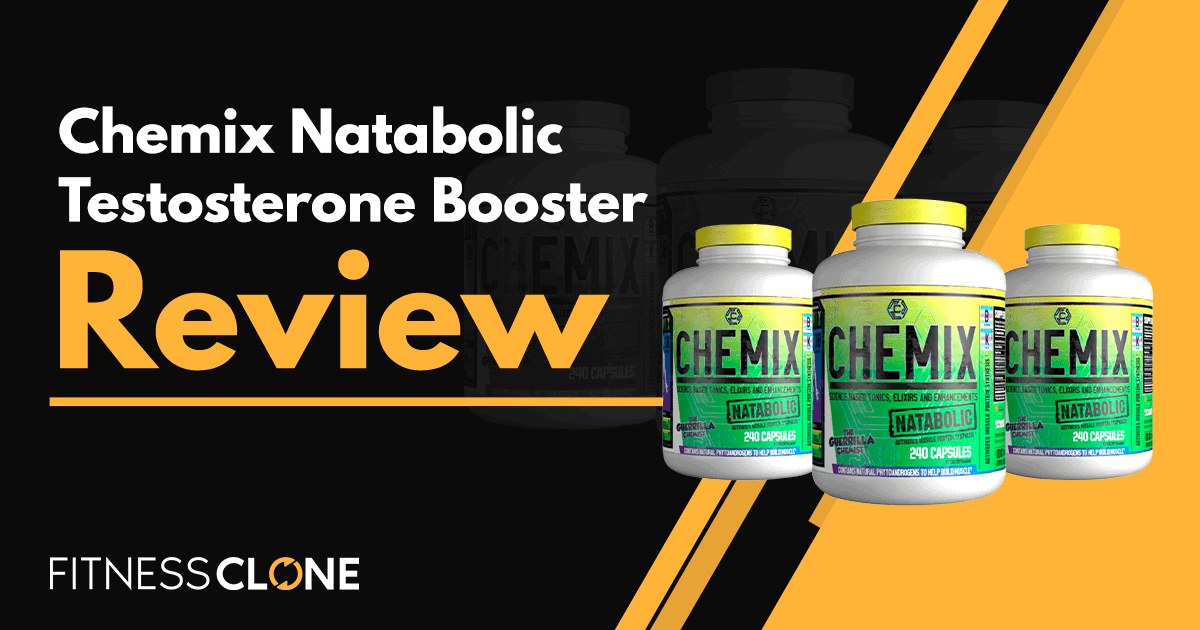 Brought to you by The Guerilla Chemists, Chemix is a brand that provides science-based results in the hottest bodybuilding tonics, elixirs, and enhancements on the market. The company was founded for everyone from beginner to expert, and they promise that their high-quality sports supplements will improve your overall performance.

This includes their T-booster, Chemix Natabolic Testosterone Booster, which Chemix claims will unlock your genetic potential to produce LOTS of androgens. Does it live up to the hype? In this Chemix Natabolic Testosterone Booster review, we’ll take a thorough look at this t-booster’s ingredients, benefits, claims, pricing, and more so you can find out if it’s really worth using.

Chemix Natabolic Testosterone Booster is designed and produced by well-known supplement company, Chemix. With supplements such as this one, as well as Chemix King Of Pumps and Chemix Cortibloc, they aim to bring you only the top when it comes to ingredients and results.

Okay, so you know how we often poke fun at the tendency of most natural anabolic boosters having nearly the same ingredients? That isn’t the case with Chemix Natabolic Testosterone Booster! In fact, while some ingredients such as boron or ashwagandha we know well and even expect to see in a natural T-booster, others such as ByroViron have us scratching our heads and heading to Google.

Mostly, the product contains T-boosting adaptogens, minerals, and plant compounds along with a little endangered rhino horn to inhibit aromatase and reduce estrogen conversion. Just kidding about the rhino horn—Chenix would never do such a horrible thing, and you couldn’t afford it if they did. That, and it wouldn’t work either.

But according to Chemix, the ingredients in Chemix Natabolic Testosterone Booster do work, and do so better than the other natural offerings on the market. So there.

With its 9 “extremely potent and unique ingredients,” Chemix claims to be the perfect blend of ingredients to help balance your hormones in heavy favor of androgens. It keeps it natural, which also means that the “extreme anabolic state” it produces is only as much as your body can naturally generate for your age, makeup, and condition.

So, keep it healthy, keep it natural, and enjoy the most of what you’ve got.

By inhibiting the enzyme aromatase, 3,5-Androstadien-7,17-Dione prevents the over-conversion of testosterone to estrogen. Yes, you do need some estrogen, just not enough to have you weeping in the corner of the gym over a broken nail. That, and estrogen can have you packing on the padding, whereas androgens keep you running lean-and-ripped.

Androgens are good for lots of things in the gym, not the least of which is their positive effects on your energy and stamina. In fact, it’s those times when you feel like Superman that your androgens are probably at their peak, which is where Chemix tells us Natabolic will keep yours.

As it turns out, this stuff isn’t really the Frankenlab weirdness it would seem by the name, but rather, a “patented” version of the herb Bryonia laciniosa. Though we’re not certain how an herb can be patented—unless Monsanto is somehow involved? Not sure, though what we are sure of is that this herb has been used for thousands of years in Ayurvedic medicine for a reason; which is, to enhance androgens—something science says it does in rats. Since we’re all gym rats, that means it’s gotta work!

Another herb used in Ayurvedic medicine for its positive effects on male hormone production is Nigella seed. It apparently boosts luteinizing hormone, which in turn boosts testosterone in lab rats.

Though some of Nagabolic’s ingredients may not be super familiar to us, one that we do know well is ashwagandha, which is pretty common in natural androgen boosters. It’s an adaptogen that works by balancing adrenal hormones so that stress hormones are only there when you need ’em for energy, but not when you need androgen production, which is something stress hormones get in the way of.

Another ingredient we’ve seen a time-or-two is boron, which is a mineral with strong ties to man-hormone production.

The best part is that it enhances free testosterone, which is the kind you want for maximum workout benefits.

Korean Mistletoe is one ingredient that definitely sets Chemix Natabolic Testosterone Booster apart. You won’t find this unique ingredient in Nugenix Total-T, Weider Prime, or Animal Test, but you will find 1g of it per serving in Natabolic. Why? Because Korean Mistletoe slows the loss of muscle mass in the elderly, which it may do by stripping the power from genes that cause muscle atrophy.

And for the younger crowd, it not only prevents the loss of muscle, but also helps you build more of it.

Just as there are phytoestrogens, there are phytoandrogens, which is what this ingredient is all about. The idea is that compounds in Eucommia mimic androgens in you so that you get the benefits without the risks.

But while this all sounds promising and dandy, there’s a reason bodybuilders and pro athletes aren’t running around safely and legally pumped on this stuff, which is because it’s weak. Though science says it augments the signaling of androgens, it only does so at a tepid rate.

But then again, tepid beats nothing at all!

They’re tasty and sweet, and they tweak the genes that build and waste muscle so that they focus mainly on the “build” part.

And that’s a good thing when you’re in the gym for that very reason!

Okay, the good news is that this stuff is on the USADA’s “Dietary supplement ingredient advisory list,” so it’s got potential as a phytoandrogen; though the bad news is that they haven’t banned it since “There is unclear evidence showing that it has performance-enhancing effects in humans.” They will, however, continue to monitor it and keep us updated if anything changes.

In the meantime, there’s a reason this stuff probably never made Jose Canseco’s arsenal of chemical enhancements, which is that it only sorta’ works…maybe…

It’s not just about producing testosterone, but keeping what you have from switching teams to become estrogen. This metabolite of DHEA can do just that while leaving you with the tiny bit of estrogen you need to be a real man.

If it works in lab rats, it works in gym rats, right? Well, possibly. As with any legal testosterone booster, there are results to be had, just not the dramatic kind you’d get from what Lenny’s selling behind the gym.

Of course, what Lenny’s selling is also about as safe as driving drunk while texting, so there’s that to consider as well.

So even though Natabolic has ingredients with some serious-sounding names, it’s really just another way to get to the same place, which isn’t such a bad place since it’s one of the balanced hormones.

Who is Chemix Natabolic Testosterone Booster Best For?

Bodybuilders and athletes over 18, both male and female, can benefit from Chemix Natabolic Testosterone Booster. Older men can also regain some of what they’ve lost over the years, and field athletes looking for more power and endurance can also benefit from this product without worrying too much about failing a piss test—especially since the USADA hasn’t banned anything here…yet! 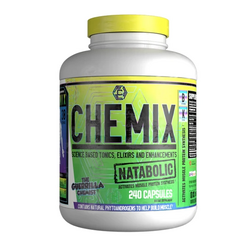 This stuff won’t really give you green hair like the guy on their website, though other than that, it comes through on what they say it will—at least to your “genetic potential,” as they indicate on their site. By this, it’s meant that yes, it will improve your hormone balance with a positive slant toward androgens; it won’t do so in any dramatic fashion.

In fact, if you ever do come across a natural supplement with dramatic results, buy a lot of it immediately since the USADA is likely to find out about it sooner than later.

So yeah, it works—just not so insanely well that your hair glows green.

Being a metabolite of DHEA, 3,5-Androstadien-7,17-Dione may jiggle the old male hormone house, so those with enlarged prostates may want to proceed with caution.

There’s also the chance that you could be sensitive or allergic to any of Natabolic’s ingredients, in which case you’ll be happy to know that they offer a full 60-day money-back guarantee.

And then there’s the usual don’t use if pregnant or nursing, under 18, or on medication—at least not without your doctor’s say-so.

At $69.95 for about a month’s worth and the only discount being a possible one-time 10% off for allowing Chemix to spam you, this stuff ain’t cheap. But it will deliver as much testosterone as your body can produce, and there’s also that whole phytoandrogen thing which, if nothing else, can produce a placebo effect (which is something we believe in, by the way).

Heights Smart Supplement Review – Is It Worth Purchasing?

It Works Thermofight X Review – Can This Supplement Help You Lose Weight?

Autumn DNA Review – Are These Personalized Vitamins Worth It?