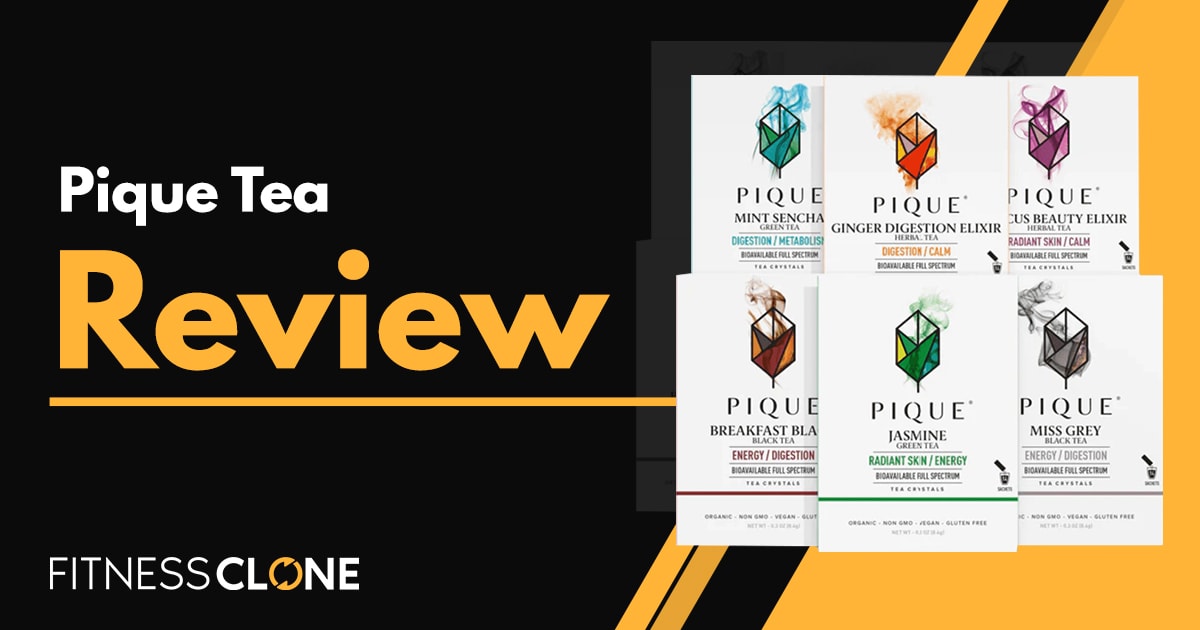 Tea consumption, in general, is gaining in popularity in the West. Some people are switching to tea instead of coffee, and others are using it for health benefits or to even wind down.

Regardless of why you use tea, it’s important to make sure that you get a high-quality, safe product.

And Pique Tea might just be one of the best tea companies out there for safety, quality, and health benefits. So if you’re looking to optimize your daily tea routine, you’ll want to pay attention to this Pique Tea review where I go over all about the different Pique Teas and what benefits they may have.

The makers at Pique are motivated to create doctor-approved, cutting-edge tea formulations for health and wellness.

Pique was founded by Simon Cheng, an Asian-born, Harvard graduate who went through significant health issues, only to turn back to his natural roots to become healthier again. And this, of course, included the consumption of tea and other natural ingredients.

Simon and the others at Pique work with multi-generational farmers, tea-masters, traditional medicine doctors, and ingredient scientists to create what they claim to be top-notch tea formulas for healthy and radiance.

They have many different teas and tea products. Pique offers varieties of black, green, fermented, mushroom, herbal, and white teas, many of which have other ingredients in them, too, such as different herbs or plant compounds.

Pique sources all of their ingredients from biodiverse, ecological areas around the world, whether that’s from mountains in Japan, the Italian coastline, or forests in China.

All of their ingredients are put through their Full-Spectrum Isolate Synthesis (F-SIS), which is a process that gently extracts and preserves the active compounds and phytonutrients. And they claim that this leads to the most bioavailable and effective ingredients possible.

Plus, all of the ingredients in Pique Tea are carefully sourced and put through Triple Toxin Screening to ensure purity and bioactivity.

The benefits of Pique Tea depend on which type of tea you choose. But in general, the advertised benefits from Pique Tea consumption are:

Sickness is something we all want to avoid as much as possible, of course. And that’s why having a healthy immune system is so important.

Pique Tea claims to support the immune system through the use of herbal teas and other ingredients that may fight infections and improve immunity, such as ginger, reishi mushroom, and elderberry.

A lot of people today are troubled by eczema, redness, irritation, acne, wrinkles, and a number of other frustrating, uncomfortable, and embarrassing skin conditions.

But Pique aims to improve your skin from the inside out. They claim that their teas will improve skin elasticity and firmness, while also giving you a radiant, youthful glow. Some ingredients that may contribute to these effects are turmeric and hibiscus, not to mention all of the tea polyphenols.

Another issue for many is poor digestion, whether that’s bloating, diarrhea, constipation, or stomach pain. And so, it’s important to optimize the gut, given the many roles it has in our health.

With Pique, you are supposed to see improved digestion and overall gut health, which are said to come from the natural prebiotics and probiotics in these teas, as well as spearmint and other digestive-supporting herbs.

Some energy drinks can give you quite the kick, but they also may lead to increased anxiety, irritability, insomnia, and an eventual crash.

Pique Tea claims to give you a steady, calm boost in energy so you can feel a little more kick but without being overstimulated.

Many of the teas contain time-release caffeine and theanine for a steady boost in energy. But there are also some caffeine-free versions that have chaga mushroom or other ingredients for an even milder boost.

So many people struggle with weight loss and carry around extra body fat than they want. And this, of course, increases the risk for other problems too.

While Pique Tea isn’t advertised as a miracle weight loss supplement, they do claim to support weight loss by increasing metabolism and reducing cravings. They also say that drinking their teas may make it easier to do fasting, which could help with weight loss.

Some ingredients in their teas that are advertised for these effects include cinnamon, bergamot, and matcha.

These are some great benefits that many people could use right now. But is Pique really the next best tea supplement?

Read on to find out.

There are a number of different ingredients used in the various Pique tea formulas.

The specific varieties of tea that are in many of the Pique products are:

Some of the products contain different forms of these teas too, depending on where they come from (For example: Early Grey Black Tea or Sencha Green Tea).

But these are the basic varieties of tea that are used, and you can see what products have which type of tea by looking at the identifier next to the name on their product page.

In addition, Pique has many herbs and plant compounds. Some of the top ones included in their products are:

Pique also has two mushrooms that are featured in some products:

Below, I’ll take a look at a few of their products to give you an idea of how their formulas work, and what the ingredients may do.

Plus, the herbal ingredients, such as ginger and spearmint, help to promote optimal digestion and gut health, while also aiding metabolism.

Reishi is a medicinal mushroom that has benefits for gut health, immunity, and stress reduction, the latter of which comes from its adaptogenic effects.

Also, jujube date has been shown to offer anti-anxiety effects by increasing calming neurotransmitters in the brain.

And goji berries and monk fruit deliver a wide variety of antioxidants for general health and wellness support.

And burdock root, bergamot, and mint all provide valuable nutrients and compounds, such as prebiotics, to help heal the gut and promote optimal digestion.

All of these ingredients may also provide benefits for metabolizing fats and sugars, which can help decrease their absorption.

Chaga mushroom has polysaccharides and other compounds that promote immune and gut function, and they offer anti-viral and anti-inflammatory effects.

And then there’s ginseng, which is an adaptogen and also a stimulating compound that may help to increase endurance and energy, while decreasing fatigue. This is due to its effects on the nervous system and certain hormones and neurotransmitters.

Lastly, burdock root is a good source of prebiotics and may offer digestive and anti-inflammatory effects.

Black tea is high in polyphenols, such as theaflavins, which have anti-inflammatory and antioxidant effects.

Plus, black tea has some probiotics for gut health and is a fast-acting source of caffeine, which may offer a boost in energy.

Electric Turmeric contains three forms of turmeric, including fermented turmeric, as well as ginger and cinnamon.

Turmeric contains curcumin and other compounds that offer anti-inflammatory and antioxidant effects. And these may be beneficial for the skin, brain, joints, and more.

Plus, cinnamon and ginger offer benefits for metabolism and digestion, as well as immune function.

Hibiscus contains a number of antioxidants, such as vitamin C and anthocyanins. And these may protect the body from oxidative stress, which could improve overall health and appearance, while reducing aging.

The Pique Tea products definitely seem like they should be effective.

All of the ingredients are meticulously sourced and tested for optimal quality, bioavailability, purity, and effectiveness.

Pique offers many different teas that are appropriate for many different aspects of health and wellness. And all of the ingredients they use in their formulas are backed by research and evidence.

In general, you can expect Pique to deliver on their claims. But just make sure not to expect anything too crazy.

The benefits you get depend on which product you choose, of course.

But in general, Pique Tea has a number of different products that have well-researched ingredients, which may support immune health, energy, digestion, skin health, metabolism, and more.

Overall, I’d think of Pique Tea as a way to complement your current health routine and give you an overall greater feeling of health and wellness.

Plus, the caffeine amounts in Pique products are modest, and given that tea also has theanine, you shouldn’t have to be really worried about getting jittery or having a crash unless you’re sensitive to caffeine.

After looking at some reviews, I noticed that a lot of the customers noted improvements in their skin, an increase in “calm energy”, and improved digestion/gut health. And these are the most likely benefits, based on the ingredients.

Even though Pique teas have less caffeine than coffee, people who are sensitive to caffeine may experience side effects, such as anxiety, jitters, nervousness, and insomnia (if taken too close to bedtime).

Other possible side effects based on the various herbs in the Pique products include:

Pique Tea is third-party tested for purity, potency, and quality. All products go through their Triple Toxin Screening, which tests for pesticides, toxic mold, and heavy metals.

All of the Pique products are organic, non-GMO, vegan, gluten-free, and free of peanuts, tree nuts, and coconuts. Although their facilities are technically not certified as allergen-free.

Pique is made in GMP-certified, FDA-approved facilities.

How to Take Pique Tea

All of the Pique Tea products come in tea crystal form.

For a cold drink, add the tea crystals to eight ounces of cold water and shake or stir.

And for a hot drink, first, add the crystals to your cup. Then, add eight ounces of warm water and stir. The ideal temperature for the water is 170℉. (Avoid using boiling water).

Where to Buy Pique Tea

You can buy any of the Pique Tea products on the Pique website.

There are many different prices depending on which type of product you buy and if you choose a product bundle or not.

There are also options for 56, 112, and other servings, so there are many options.

Use code “FITNESSCLONE5” for 5% OFF

After reviewing all of the products, the cheapest price per serving I found was $0.97, and the most expensive option was $2.57/serving.

Overall, Pique Tea is pretty expensive, but nothing outrageous. Plus, all of their products are really high quality, so it seems that the prices are justified.

That’s the end of this Pique Tea review.

And I must say, I’m impressed. Not only by the product quality but also by the sheer number of products they offer.

Pique offers many different types of tea, all of which have well-researched, high-quality ingredients. And it’s safe to say that there’s probably a tea that they make which suits your needs and gives you the benefits you’re looking for.

And that’s why I recommend Pique as a solid option for anyone who wants to add tea to their routine.

Pro-45 Review – Is This Live Conscious Supplement Worth Using?

Ideal Greens Review – Should You Buy This NutraOne Superfood Supplement?