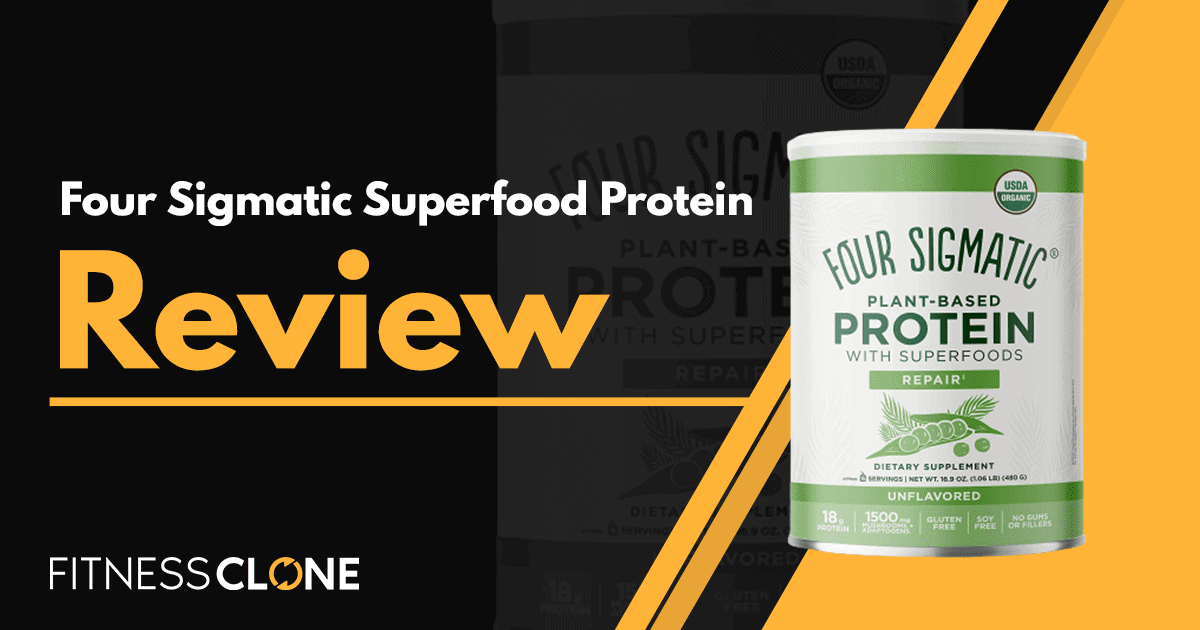 If you follow a lot of bodybuilders and workout enthusiasts on social media, you likely hear them talk about protein constantly. If you don’t, then you’ve likely heard your doctor or nutritionist bring it up. Either way, protein receives a lot of attention, and it’s essential to your everyday health.

Protein is one of the three macronutrients your body requires in large amounts in order to function normally — unlike vitamins and minerals. Alongside fat and carbohydrates, protein is measured in the form of calories (kcals). Every gram of protein is equal to four calories.

Once consumed, protein is broken down into amino acids with the help of digestive enzymes. Those amino acids are then used to build proteins that your body needs to survive. They travel through the bloodstream to the muscles, bones, and any other organ that needs amino acids.

Protein plays a major role in a variety of functions in the human body. It not only gives your organs their shape, but they’re responsible for growth and development, strong bones, a strong immune system, emergency energy, a boosted metabolism, recovery, and so much more. That’s why there are many varieties and options of protein supplements out on the market.

What Is Four Sigmatic Superfood Protein?

The supplement market is saturated with unique protein powders designed to help you maintain the right amount of protein each day. Four Sigmatic Superfood Protein is one of those protein powders, but it’s unlike any other on the market today. In fact, it’s one of the best protein powders available.

Superfood Protein is brought to you by Four Sigmatic, a supplement company that’s dedicated to providing customers with clean, safe, effective, and quality formulas. If you’ve ever heard of this brand, you know that they have a thing for functional mushrooms and aren’t shy about it.

And that’s what makes Four Sigmatic Superfood Protein powder so different from other protein powders on the shelf. Not only does it use a unique blend of plant-based protein sources, but it combines that with five of the most prominent functional mushrooms and two highly effective adaptogenic herbs.

This combination gives your body a wide range of benefits that go well beyond what protein provides. In addition to giving you a hefty amount of protein, it improves cognitive function, provides a natural energy boost, boosts your immune system, and relieves stress or anxiety.

Compared to the other protein powders available on the market, we’re absolutely enamored by Four Sigmatic Superfood Protein. It will become your favorite new thing to drink in the morning — replacing coffee. Without any caffeine, you can even drink it several times per day.

Most protein powders — like whey protein found in High Impact Whey Protein or casein like that in Syntha-6 — are animal-based proteins. While that’s not a bad thing and ensures you’re consuming a complete protein, it doesn’t satisfy the needs of most people today, especially those that are following a plant-based diet. Well, prepare to be amazed.

Not only does Four Sigmatic Superfood Protein contain five different plant sources of protein, but they become a complete protein when combined together. This means your body gets all nine essential amino acids that it needs to function properly. It also delivers a modest 18 grams of protein per serving.

The five organic protein sources found in this formula are hemp seeds and pumpkin seeds from Europe, chia seeds from South America, coconuts from Southeast Asia, and peas from the United States. It’s an international affair of protein that your body will more than appreciate.

Source: functional mushroom that largely grows on birch trees and grows best in colder climates, resembles burnt charcoal, native to Siberia and Asia in general, was used as a coffee substitute during WWII in Finland, main active ingredients are inotodiol, betulin, and betulinic acid

Side Effects: shouldn’t be taken if allergic to mushrooms or on certain medications

Source: functional mushroom that’s white and resembles the appearance of a lion’s mane or a weeping willow tree, native to Asian countries, also referred to as hou tou gu or yamabushitake, known for having a seafood-like flavor, main active ingredients are hericenones and erinacines

Side Effects: shouldn’t be taken if you’re allergic to mushrooms

Side Effects: can cause an upset stomach if taken in high amounts, shouldn’t be taken if allergic to mushrooms

Source: functional mushroom with over 400 species, two most prominent species include Cordyceps Sinensis and Cordyceps militaris, grows on the back of larvae and replaces its tissue with mycelium, main active ingredients include Cordycepin and exopolysaccharides

Side Effects: shouldn’t be taken if allergic to mushrooms

Source: functional mushroom that resembles a turkey tail due to its shape and color, commonly referred to as Trametes Versicolor or Coriolus Versicolor, main active ingredients include Polysaccharide K, quercetin, and baicalein

Side Effects: can cause gas, bloating, and dark stools when taken in high amounts, shouldn’t be taken if allergic to mushrooms

Side Effects: shouldn’t be taken with certain medications

Source: an adaptogenic herb native to Asia, also known as Eleutherococcus senticosus or Siberian Ginseng, a staple in traditional Chinese medicine, a relative of the Ginseng family, but considered to be less potent

Side Effects: shouldn’t be taken with certain medications

While most protein powders come in a plastic jug, Four Sigmatic takes a more traditional approach to their Superfood Protein packaging. It comes in a tin/aluminum can that looks a lot like the packaging oats come in. The label and cap are white with light and dark green accents.

The back of the label has all the ingredients and supplement facts listed clearly. Let’s take a closer look at the nutrition facts associated with this protein powder:

Each scoop of Four Sigmatic Superfood Protein is 32 grams of powder, which will need a good 12-16oz of water to mix well. Each can contains 15 servings, meaning you’ll need two cans to last you a month when taking one serving per day. Each can will cost you $50, but you can save $10 with a subscription bringing the price down to $40. 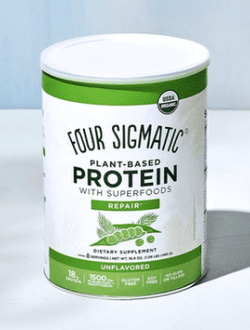 With so many unique protein powder formulas out there today, finding the right one for you can be extremely difficult. It’s important that you do your research and take into account all of the pros and cons of each formula before coming to a final decision on which one fits you best.

While we believe Superfood Protein by Four Sigmatic is one of the best options out there — especially if you’re interested in a plant-based protein powder — we understand that no formula is perfect. With that said, let’s take a look at everything we like and don’t like about this formula.

Four Sigmatic Superfood Protein is marketed as an immune-supporting, plant-based protein powder that gives your body what it needs for optimal function. After taking a close look at the ingredients and dosages, it’s clear that Four Sigmatic followed through with what this formula is designed to do.

The five plant-based, organic protein sources come from all over the world. When combined together, they give you a complete protein that ensures your body receives all nine essential amino acids — and then some. This is extremely important in a plant-based protein powder.

Of course, the protein is just the beginning of what this powder provides. With five functional mushrooms and two adaptogenic herbs, the benefits go far beyond what most protein powders offer in today’s market — making this one of the most versatile and effective protein powders.

All five of the functional mushrooms improve the immune system and enhance the digestive system, but the presence of Lion’s Mane and Cordyceps helps improve cognitive function and energy levels. Ashwagandha and Eleuthero also improve mood and stress management.

What you get with Four Sigmatic Superfood Protein is an immune-boosting, brain-boosting, energy-boosting, gut-boosting, and protein-boosting supplement that blows others completely out of the water.

We truly believe there’s no real comparison to Superfood Protein by Four Sigmatic on the market today. It’s a unique formula that you won’t find elsewhere. There are a few protein powders that utilize functional mushrooms, but even they don’t quite match up to this one.

With that said, Four Sigmatic is the perfect protein powder for you if you want to get more than just protein. It’s designed to improve overall health and wellness on a daily basis. On the other hand, it’s not going to be the best option if you’re interested in protein and nothing else.

We can’t get enough of this protein powder. Four Sigmatic Superfood Protein offers a unique blend of plant-based protein sources, a powerful blend of functional mushrooms, and adaptogenic herbs to top it all off. And since it’s unflavored, you can add it to pretty much whatever you want, including baked goods!

With that said, we understand that the cost is a little more than what most people are willing to pay. Although it’s 100% worth the investment and your body will appreciate it, it’s not going to fit in many people’s budgets. Although not as good, Laird Superfood has a much cheaper option.

Either way, you can’t underestimate the powerful combination of protein, functional mushrooms, and adaptogens. If you’ve never tried it out before, now is the perfect time to give it a go.

Why is protein so important?

Protein is one of three macronutrients that are measured in the form of calories — which are used to burn energy. Carbohydrates are the body’s main source of energy, while fats are usually stored for energy. Protein is the body’s emergency source of energy when it needs it.

Since protein is rarely used for energy, it plays a role elsewhere in the body. After being broken down into amino acids — the building blocks of protein — it travels through the bloodstream and is found in pretty much every tissue, muscle, organ, and bone inside the body — including the skin.

How much protein do you need per day?

There’s a lot of confusion about how much protein is needed per day. You’ve likely heard bodybuilders and workout enthusiasts say, “the more protein, the better.” Although active individuals often need more protein than other people, that doesn’t mean more is always better.

What’s the difference between plant-based and animal-based protein?

It doesn’t matter what types of foods you like to eat; you should always make sure each meal you eat contains some source of protein. The good news is you can find protein in both animal-based foods and plant-based foods — though they aren’t always equal.

What’s the difference between complete and incomplete protein?

Phen24 Review – What Can It Do For Your Metabolism?

FitTea 14 Day Detox Review – Can This Help You Lose Weight And Get Healthier?

Atrantil Review – A Thorough Look At This Digestive Supplement