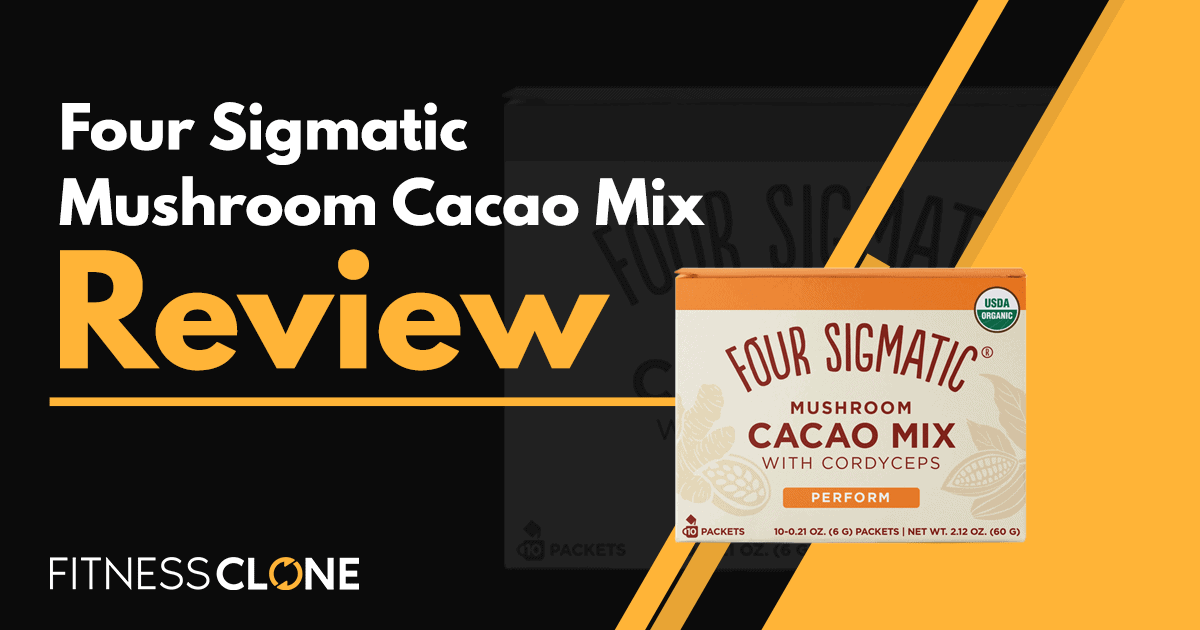 Functional mushrooms have taken the Western world by storm in recent years. Originally utilized in Japanese, Chinese, and Korean medicine and cooking, they have earned the title “mushrooms of immunity” for a reason.

They come with a variety of health benefits, including anti-inflammatory and antioxidant properties, the ability to boost the immune system, as well as providing the body with a nutrient-dense source of food.

While many people fear the taste, texture, or even sight of these powerful superfoods, supplements have been introduced to make this lifestyle much easier. One of the companies on the front lines of this movement is Four Sigmatic, and they offer a wide variety of functional mushroom supplements — including Four Sigmatic Ground Mushroom Coffee, Four Sigmatic 10 Mushroom Blend, and Four Sigmatic Mushroom Cacao Mix, which is the one we’ll look at it in this review.

Mushroom Cacao Mix is a powdered supplement that converts a hot glass of water into a functional mushroom lover’s nighttime remedy. Combining cacao powder and the power of the Reishi mushroom, consumers receive the perfect glass of hot cocoa.

Served in easy-to-carry individual packets, Four Sigmatic is dedicated to making functional mushrooms accessible to anyone and everyone.

Their founder, Tero Isokauppila, grew up foraging functional mushrooms on his family’s farm in Finland. Exposed to the beautiful nature of these mushrooms early, Isokaupilla realized how much they were neglected in Western parts of the world.

His product line features a variety of unique supplements that feature a wide range of different functional mushrooms. If you’re a hot cocoa lover or are looking for the perfect beverage to drink before bed, Four Sigmatic Mushroom Cacao Mix is the supplement for you.

Are Reishi Mushrooms Worth It?

Did you know that there are over 2,000 different species of mushrooms all over the planet? Despite the large number of different kinds, only 15 of them have earned the “functional mushroom” title.

The Reishi mushroom is one of those 15, though it’s rarely used in cooking. They look like a saucer and can be found in a range of colors — from red to black. Reshi mushrooms will grow on logs, grain, cork, or sawdust.

As far as taste goes, they are rather bitter and won’t be the most enjoyable thing to eat. This is a large reason why they aren’t utilized in cuisine often, but that doesn’t mean they don’t come packed with benefits.

Here’s a list of some of the more prominent benefits the Reishi mushroom provides:

As powerful as the Reishi mushroom is, they are widely unheard of in the Western world. You’ll be able to find them in some stores across the country, but even then, most people simply don’t know they exist — or know the benefits behind them.

Does Four Sigmatic Make Any Claims With This Product?

One thing I really enjoy about Four Sigmatic is their transparency. They do make claims with Mushroom Cacao Mix, but they are directly related to the benefits with a growing amount of scientific research to back them.

We’ll list all the claims they make below before we dive into the various ways you can add it to your daily diet:

If you’re looking for an easy and delicious way to calm down after a long day, Mushroom Cacao Mix will get you there in a jiffy. You’ll be ready to slip into your pajamas, brush your teeth, and prepare for what lies ahead of you tomorrow.

How To Take Mushroom Cacao Mix

As we’ve mentioned, Mushroom Cacao Mix is designed to be your new and favorite hot-cocoa-alternative. Four Sigmatic recommends adding one individual packet of their powder into a hot glass of water — that’s it!

If you would like to spice it up a little bit, you can always add natural sweeteners, nut milk, or coconut oil. This will also add a little bit of flavor to your beverage that wasn’t there before.

Four Sigmatic also recommends drinking it approximately one hour before bed. This will give the nutrients enough time to settle before you decide to lay down for the day. At that time, you can allow the “Queen of Mushrooms” to take over!

Claims and guarantees are great for marketing, but they simply do nothing for the body. It’s the ingredients that will provide the benefits in each and every supplement, which is why it’s always recommended to read the nutrition and ingredient label before purchasing one.

While we won’t get to see the exact dosages of all the ingredients, we will get a very good idea of what to expect out of Four Sigmatic Mushroom Cacao Mix. Let’s take a look at what ingredients they’ve utilized!

They extract the fruiting bodies and add 500mg of the Reishi mushroom powder to their formula. This will help manage stress, promote healthy sleep cycles, provide antioxidant benefits, and assist the immune system.

Organic cacao powder has long been touted for being rich in antioxidants, iron, magnesium, and calcium. It can potentially help reduce stress, blood pressure, depression, and promote a healthy heart.

Four Sigmatic uses organic cacao powder from the high altitudes of the Dominican Republic, known for being extremely smooth — or as Four Sigmatic describes it, “sweep-you-off-your-feet-smooth.”

If you’re looking for an alternative to refined sugar, Four Sigmatic recommends the use of Coconut Palm Sugar. It is created from the sap of the coconut palm, after being dehydrated and boiled of course. Many call it the “maple syrup of the tropics.”

Coconut Palm Sugar is highly regarded for being a sweetener with the added benefit of only containing 2g of sugar per serving. It has a low glycemic index, is rich in antioxidants, has less fructose than refined sugar, more electrolytes, and is good for the gut.

We all know what cinnamon is, but very few of us are aware of the many benefits they’re packed with. It’s loaded with antioxidants, has anti-inflammatory properties, improves insulin sensitivity, and can promote a healthy heart and metabolism.

Four Sigmatic uses enough cinnamon to pair well next to the cacao without overpowering it. It’ll be the addition to your hot chocolate you didn’t know you were missing.

Recommended Dosage: No more than 3g per day

Cardamom is best known for its sweet taste, something many have compared to the taste of mint. It’s an intense flavor that will pair well with the cacao and Stevia extract. It is heavily used as a spice in Ayurvedic cuisine.

Researchers have concluded that cardamom is loaded with antioxidants, helps lower blood pressure. It has anti-cancer and anti-inflammation properties, can treat bad breath and prevent cavities, aid in digestion, and improve breathing when consumed.

Recommended Dosage: No more than 400-500mg per day

Four Sigmatic adds a pinch of Stevia extract to help balance out the taste of the Reishi. It’s a plant that is part of the ragweed family and is known as a nonnutritive sweetener. It is very appealing to those trying to lose weight due to its low-calorie content.

The Stevia used in Mushroom Cacao Mix is claimed to prevent the metallic taste that some supplements have when adding Stevia. With the Cardamom, you’ll barely even notice you’re tasting an actual Reishi mushroom in your hot chocolate.

Recommended Dosage: No more than 1.8mg per pound of body weight

One of the things you’ll notice on Four Sigmatic’s website is the fact that Mushroom Cacao Mix entered 2020 with a new look! There’s not a whole lot to the packaging, but it’s a simple and appealing design that matches the intention of the product.

The box it comes in is mostly white with blue lettering and semi-beige background graphics. Right on the front, you’ll see the word “CHILL,” which hints at what the product will do for you. Inside the box, you’ll have individually-wrapped packets of powder with a similar design than the box.

Each box will come with 10 packets, and each packet is intended for one serving. There will be 6 grams of powder in each packet, and they clearly state the nutrition facts on the back of the packet:

They mention the 500mg of Organic Reishi Mushroom, but they don’t give exact dosages of the other ingredients.

Each box of 10 servings will cost you $20 on the Four Sigmatic official website. They also offer a subscribe and save option, which will save you 20% and lower the cost to $16. 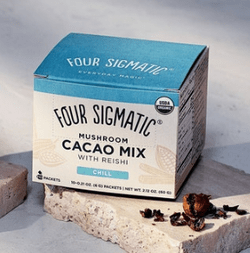 As much as you’d like every supplement to be perfect, it’s rather unrealistic to expect in today’s market. With so many companies looking for the cheapest way of doing things, they will often give up a certain level of quality to their product.

Despite the growing concerns over trust and quality, Four Sigmatic is dedicated to keeping the integrity of functional mushrooms and what they stand for. They use healthy and organic ingredients, while staying away from unnecessary or harmful ingredients.

Four Sigmatic is very clear about what this product is designed and intended to provide consumers. They utilize ingredients with scientific evidence backing them and are mindful of the dosages of each ingredient.

When it comes to a supplement, you can’t ask for much more than that.

Earlier in this review, we mentioned the few claims made by Four Sigmatic, which were highlighted by the following:

Of all the functional mushrooms, there’s only one with significant effects on sleep cycles — the Reishi mushroom. Combining it with cinnamon and cardamom will increase the antioxidant power this beverage has.

In addition to that, they effectively reduce the bitter taste of the mushroom by using Coconut Palm Sugar and Stevia extract alongside the all-famous cacao powder.

As a result, we have an extremely tasty hot cocoa beverage with the added benefits of the Reishi mushroom — exactly what Four Sigmatic intended.

When it comes to Reishi mushroom supplements, there won’t be many that compare to the quality of Four Sigmatic. Still, that doesn’t mean you can’t find a quality supplement outside of that. In fact, some companies will provide a cheaper option.

Moon Juice, Hyperion Herbs, Anima Mundi, and Om Mushroom Superfood are just some of the companies that offer a Reishi mushroom supplement. Unfortunately, these won’t contain the extra ingredients found in Mushroom Cacao Mix. In addition to that, they don’t offer the amazing hot cocoa taste.

There are also some companies that utilize a combination of functional mushrooms like Naturealm and Garden of Life. Even those supplements won’t provide the same quality as some of the other Four Sigmatic products available — which they offer a lot.

There’s not much to complain about with any of Four Sigmatic’s products. Even if you’re someone who’s 100% against the taste, smell, and texture of mushrooms, Four Sigmatic finds creative ways of making these mushrooms easy to consume.

With Four Sigmatic Mushroom Cacao Mix, they combine the relaxing and delicious hot cocoa beverage we all love with the nutritious and health benefits of the Reishi mushroom.

If you’re someone who drinks hot chocolate on the regular, it’s time to maximize the effectiveness of it. If you don’t drink hot chocolate often, it might be time to start!

Don’t worry if you’re one of the few rare ones that won’t enjoy a glass of hot cocoa. Four Sigmatic has plenty of other ways for you to try functional mushrooms out!

Seed Probiotics Review – A Look at This Unique Probiotic Supplement

Brain Juice Review – A Liquid Nutritional Supplement For The Brain

MyProtein Review – How Does This Protein Powder Measure Up?