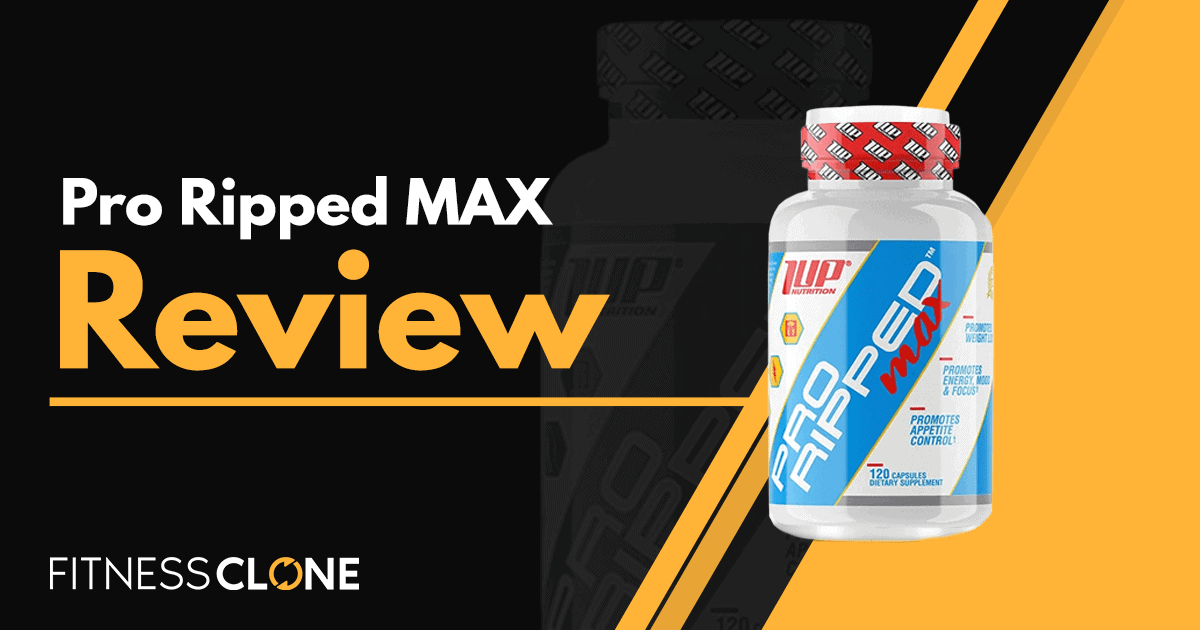 Pro Ripped MAX is a maximum strength weight loss supplement with many additional functions. It is manufactured by 1-Up Nutrition, designed to help accelerate fat loss, increase your energy, and help suppress cravings throughout the day. It is tested by a 3rd party lab for quality and purity reassurance, and by being a non-proprietary blend, you know exactly what you’re getting.

Let’s take a closer look at this weight loss supplement in this Pro Ripped MAX review.

Pro Ripped MAX contains a mix of ingredients to help support all aspects that contribute to successful weight loss – Appetite regulation, adequate energy, mental focus and motivation, and fat burning compounds. By addressing all these factors, you can be sure to have a successful diet 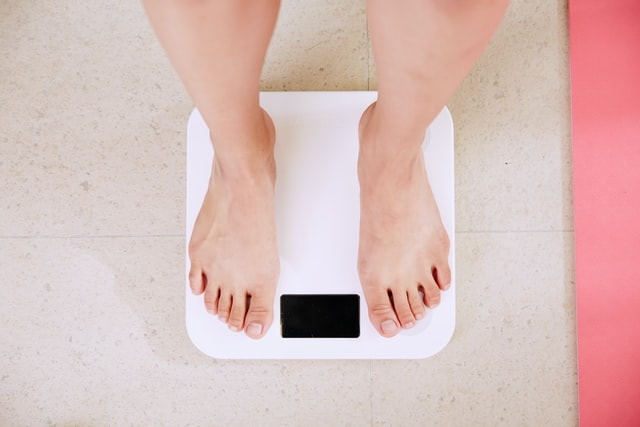 Natural appetite suppressants such as l-theanine, chromium, and vomitoria extract can inhibit the signals that tell your body it’s hungry. By reducing hunger pangs, you can take your mind off eating and focus on burning more calories.

Dieting can make you cranky and make you obsess about your next meal, so take that out of the equation with ingredients such as L-Theanine, theobromine, and NALT. These are compounds scientifically shown to have a benefit on mood and focus.

Pro Ripped MAX contains caffeine and other herbal stimulants to naturally increase your energy levels so you can stay active all day without crashing. 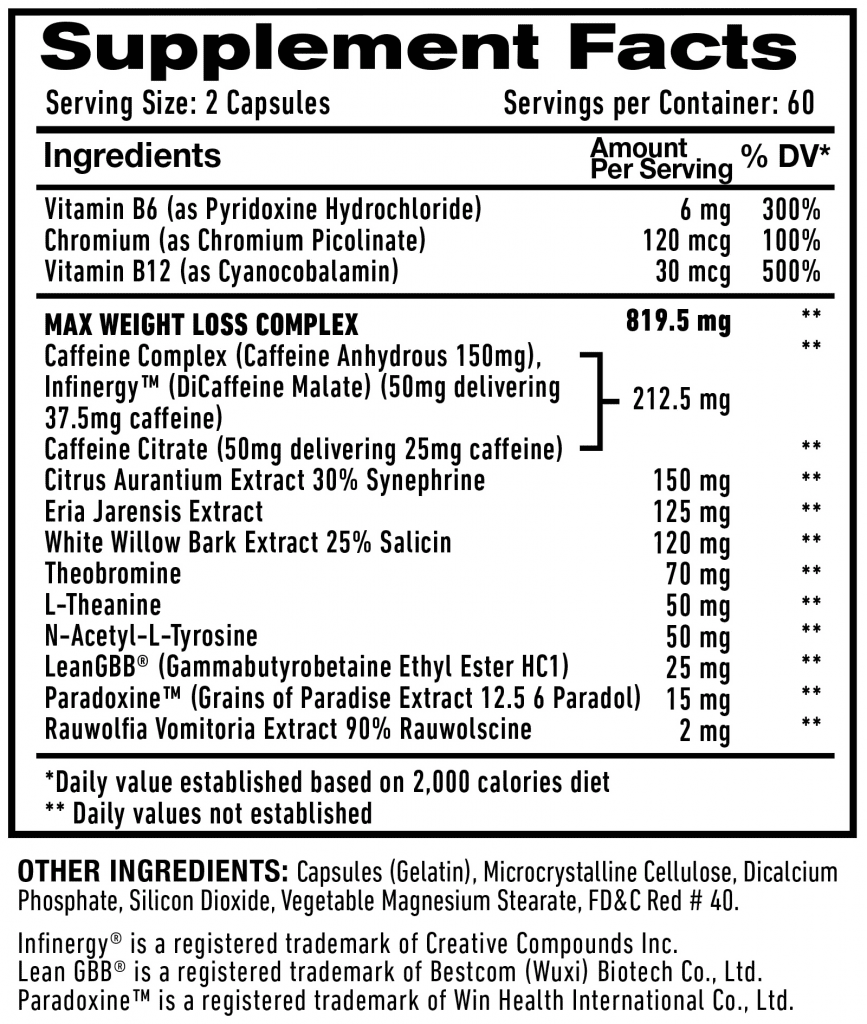 Vitamin B-6 is an essential vitamin that helps in the synthesis of over 100 enzymes responsible for proper metabolism and neurotransmission. Supplementing Vitamin B-6 may improve mood, act as an antidepressant, and reduce the risk for heart disease. Being deficient in vitamin B-6 can lead to depression, inflammation, and anemia, which can result in fatigue and lack of energy.

Citrus Arantium, also known as bitter orange, has been used as an herbal weight loss supplement because it contains synephrine. Synephrine is a stimulant, as well as vasoconstrictor, which elevates blood pressure and can make you feel more energized. However, there is not sufficient data to support bitter orange as an effective supplement for weight loss.

Chromium is an essential trace mineral that aids in the regulation of insulin. Chromium taken as a supplement is only effective in people who are already deficient in the mineral, and it may contribute to a slight improvement in insulin function in the body. A study was done researching the effects of chromium on appetite in overweight people, and found a notable reduction in carbohydrate cravings compared to a placebo. However, more studies are needed to support these findings.

Vitamin B-12 is an essential vitamin that is necessary for proper neurological function, and DNA and red blood cell formation. Deficiency in Vitamin B-12 is uncommon, but can result in anemia, neurological damage, fatigue, and elevated levels of homocysteine, which increases the risk for heart disease. Vitamin B-12 is sometimes taken as a performance enhancer for athletes, but it is only beneficial for people who have a B-12 deficiency.

Caffeine is a strong stimulant and nootropic, which is derived from various plants, or it can be made synthetically. Caffeine is very effective at causing alertness and wakefulness and may result in increased strength and endurance during exercise. Caffeine is a popular ingredient in most weight loss supplements; it can also be found in Hydroxycut Black, ProbioSlim, and RazaLEAN. Pro Ripped MAX contains a caffeine complex composed of Caffeine anhydrous, Infinergy Dicaffeine malate, and caffeine citrate. This combination allows for longer-lasting energy, to avoid a crash associated with conventional caffeine supplements.

Eria Jarensis ( or N-Phenethyl Dimethylamine) is a natural stimulant and nootropic derived from an orchid species native to Asia. It is commonly added to workout and weight loss supplements because it contains N-phenethyl dimethylamine, which increases levels of dopamine and noradrenaline in the body. This can improve concentration, focus, give feelings of euphoria, and is thought to reduce appetite and anxiety.

Willow bark is simply bark from a willow tree. It has been used for centuries as a natural pain reliever, similar to Asprin. It naturally contains salicylic acid and has anti-inflammatory properties that can reduce pain and fever. Due to minimal research of willow bark as a pain reliever, it is not evident that it is as effective as a pain medication.

Theobromine is a compound similar to caffeine that is found in the cacao plant and is what gives dark chocolate a bitter taste. It’s’s benefits include improving wakefulness, motivation, mood, reducing inflammation, and it has a slight vasodilating effect in the body, which helps to lower blood pressure. Theobromine is commonly added to weight loss supplements after it was shown to aid in weight loss in one study conducted in rats. However, there is no sufficient data to support theobromine as an effective weight loss supplement.

L-Theanine is an amino acid commonly found in tea leaves. It naturally increases levels of GABA, dopamine, and serotonin, which is associated with the regulation of appetite, mood, and cognitive skills. It is also effective at promoting wakeful relaxation without causing drowsiness by enhancing alpha brain waves. Various studies have found that l-theanine can reduce stress in people with high levels of anxiety, and there are no known side effects associated with it’s’s supplementation.

N-Aceytl-LTyrosine (NALT) is the acetylated version of tyrosine, an essential amino acid. It is commonly supplemented as a nootropic due to its role as a precursor to dopamine in the brain. Dopamine is responsible for motor control, coordination, and brain activities such as focus, motivation, and pleasure. Supplementing NALT does increase the level of l-tyrosine in the brain, which can help with supporting your brain when doing demanding or tedious tasks.

Lean GBB is a nutritional supplement that gets converted into l-carnitine after ingestion. L-carnitine has long been used as a weight-loss supplement due to its role in the transport of fats, but has not been proven to be effective for fat loss. However, l-carnitine has been shown to increase oxygenation of tissues, which can improve focus and reduce fatigue accumulated during exercise.

Paradoxine is a supplement made of Grains of Paradise – a spice native to West Africa that contains several compounds thought to help with fat burning. It works by supposedly converting white fat tissue into brown tissue. Having a higher ratio of brown fat tissue to white is associated with increased energy expenditure, improved lipid levels, and metabolism, thus increased fat loss. A study conducted in humans found that Grains of Paradise increased energy expenditure, slightly reduced visceral fat, but did not have an effect on total body fat after 4 weeks.

Rauwolfia Vomitoria is a medicinal shrub native to West Africa that contains Rauwolscine. Rauwolscine acts like a stimulant in the body and increases levels of norepinephrine, epinephrine, and dopamine while decreasing serotonin levels. This is thought to have an anti-anxiety and antidepressant effect while also suppressing appetite, which can contribute to weight loss. However, there is no clinical data to back the effectiveness of rauwolfia vomitoria extract as a weight loss supplement.

Who Is Pro Ripped MAX Intended For?

This product is intended for use by healthy adults who want a supplement to support their weight loss. It should not be used in addition to other weight loss supplements, and is best suited for people who have trouble with appetite control, fatigue, and poor mood and motivation.

It is not likely Pro Ripped MAX will directly result in weight loss simply by taking it. It can, however, help to support your weight loss with its various effective roles that are backed by science. These include acting as a powerful stimulant to provide energy to fuel workouts, and having a positive effect on mood and reducing stress that can result in emotional eating. It is possible to see a reduction in appetite, but this is highly dependent on the individual. Paradoxine was the only ingredient that claimed to increase energy expenditure, which can directly impact weight, but more research is needed to support its efficacy. 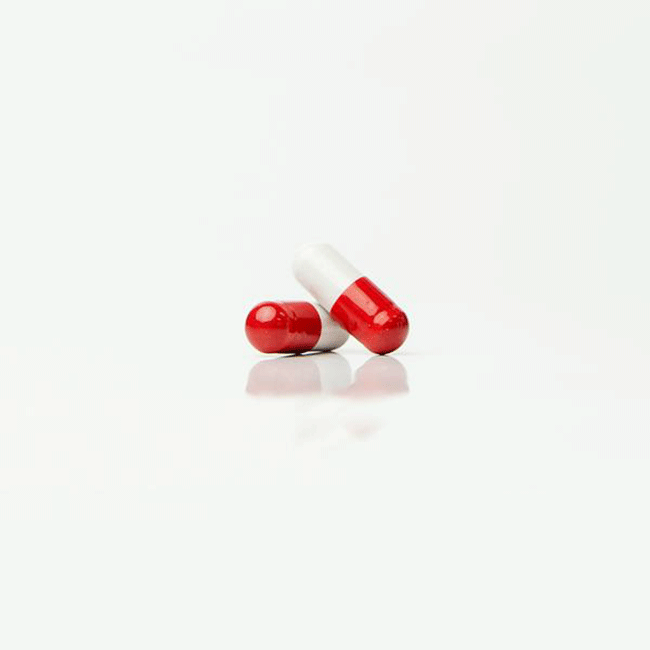 How To Take Pro Ripped MAX

Take two capsules before your first meal of the day, and two capsules 6 hours later. To assess tolerance to its stimulatory effects, take 1 capsule per serving until tolerance is reached. Make sure to always stay hydrated while supplementing this product.

Make sure to review the manufacturer’s warning before trying the product.

Where To Buy Pro Ripped MAX

This product is available for sale through 1upnutrition.com and team1up.com. The best value comes in a bottle of 120 capsules for $50.00 ($0.84/serving). 1 up nutrition offers a 100% money-back guarantee if you are not completely satisfied with the product.

Overall Rating: 3.33 out of 5
Categorized in: Fat Burner Reviews, Reviews