MUD WTR Vs. Four Sigmatic – Which Coffee Alternative Is The Top Choice? 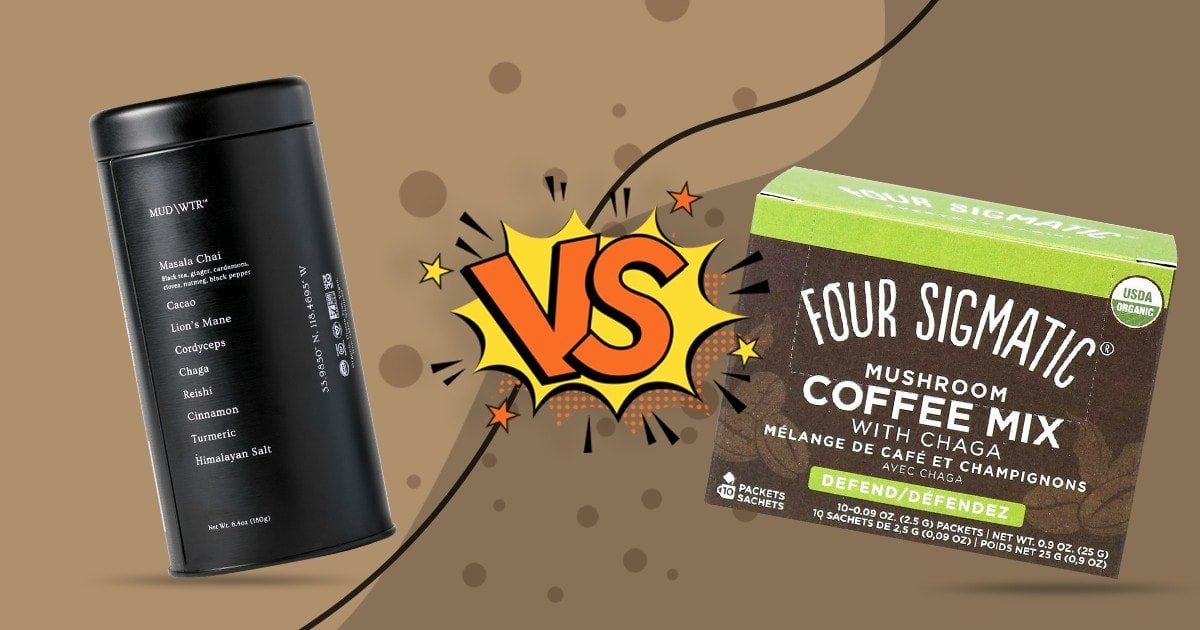 Coffee is perhaps the most commonly consumed drink when it comes to an energy boost. This is all thanks to its caffeine, a natural stimulant that gives us the energy boost that we need for the day (and night).

Once demonized for its bad effects, coffee is now a crowd favorite. Aside from energy boost, coffee is also shown to bring other health benefits such as fat burn, improving physical and mental performance, lower risk of certain diseases such as type 2 diabetes, and coffee is also a great source of antioxidants.

Nevertheless, not all people can tolerate coffee. Too much coffee can cause side effects such as jittery, anxiety, palpitations, and disturbed sleep. Others simply can’t tolerate caffeine – and for these reasons, coffee alternatives were made.

Coffee alternatives are products that are made to bring you the benefits of coffee without bringing in the nasty side effects. How they are made and what they are made can vary, but the main goal of energy without the negatives is the same.

There are quite a few options out there when it comes to coffee alternatives, but two that stand out are MUD\WTR and Four Sigmatic Mushroom Coffee. Which is the better option, you ask? Well, that’s why we’re here! In this article, we are going to talk about how MUD\WTR and Four Sigmatic Mushroom Coffee differ, the ingredients they use, their benefits, and above all, which of them is the better coffee alternative.

So, without further ado, let’s get started with this comparison of MUD\WTR vs. Four Sigmatic!

According to its description, MUD\WTR is a coffee alternative product that is made of “organic ingredients lauded by cultures old and young for their health and performance benefits.” While not free of caffeine, MUD\WTR only contains 1/7th of the caffeine in coffee. According to them, this allows MUD\WTR to provide you with natural energy and focus while not bringing in some side effects such as jitters and crashes.

Here are the main ingredients used in MUD\WTR (we will discuss more on it later):

MUD\WTR is 100% organic, keto-friendly (it only contains 4 carbs), sugar-free, and it’s a low-calorie supplement (20 calories).

Like MUD\WTR, Four Sigmatic Mushroom Coffee was made in an attempt to reduce or even eliminate coffee dependency because of the side effects that coffees can cause. Here are some of the key features that you need to know:

Now that we know the basics of the two coffee alternatives, let’s talk about their ingredients. By knowing their ingredients, we’ll get to know what we are getting from these supplements. We’ll also get to know if they can potentially deliver their promised benefits or not.

As mentioned earlier, MUD\WTR has the following ingredients:

Among the listed ingredients, I believe that the following are its key ingredients: cacao, turmeric, sea salt, Cordyceps, and Reishi mushroom. Let’s talk about them in detail.

Cacao, especially raw cacao, can bring tons of health benefits such as the reduced risk of heart attack and stroke, improved blood flow to your brain, which results in improved brain function, better mood, and it can help you lose weight.

Turmeric is a very healthy spice, thanks to its active ingredient, curcumin. Curcumin is a very potent antioxidant and anti-inflammatory compound. Aside from that, it can also reduce your risk of many diseases such as heart disease, depression, brain diseases such as Alzheimer’s, and even cancer.

Sea salt (and salt in general) aids in maintaining proper hydration and blood pressure levels in your body. If properly maintained, this can improve your energy levels. Also, sodium, a main component of salt, plays a crucial role in fluid balance. If your fluids are balanced properly, this allows you to exert more effort (e.g., high-intensity exercises) without getting dehydrated quickly.

Cordyceps is a parasitic fungus that grows on larvae of insects. But there are also Cordyceps that are 100% vegan and do not depend on parasitic activities to thrive; hence no insects are hurt.

Despite being a parasitic fungus, Cordyceps does provide some great benefits to humans. Some of the benefits that we can get from it are improved exercise performance, potential anti-tumor properties, aid in managing type 2 diabetes, and potential benefits for our heart health.

Reishi Mushroom is one of the types of mushrooms that are well-known for their health benefits. Some of the health benefits that we can get from Reishi include immune system support, reducing fatigue, reducing depression, and blood sugar regulation.

Four Sigmatic Mushroom Coffee has 4 main ingredients. They are:

Chaga is mostly known for its benefits in our immune system. Aside from that, the Finns (makers of Four Sigmatic Mushroom Coffee are Finnish) had used this mushroom as a substitute for coffee in WWII whenever coffee beans were not available.

Also known as the “Siberian ginseng,” eleuthero is an adaptogenic root that can be found in many parts of Asia and Russia. This adaptogenic root is known to support endurance, stamina, cognitive function, low blood pressure, and overall wellness.

Benefits-wise, MUD/WTR, and Four Sigmatic Mushroom Coffee can bring about the same benefits since some of their ingredients, such as Cordyceps, are similar.

However, what differentiates the two is that MUD\WTR has more ingredients compared to Four Sigmatic Mushroom Coffee, allowing it to deliver more benefits than the latter.

Based on their website’s reviews, both MUD/WTR and Four Sigmatic Mushroom Coffee had very positive reviews.

Customers reported that both of their respective products could indeed bring about the effects of coffee (i.e., energy boost) without giving them the side effects caused by coffee. For MUD\WTR, one even noted, “a second cup without anxiety.” For Four Sigmatic Mushroom Coffee, one claimed that it’s “the better way to energize.”

MUD\WTR vs. Four Sigmatic Mushroom Coffee: Which is Better?

To conclude, both MUD\WTR and Four Sigmatic Mushroom Coffee are great coffee alternatives – each of them has its own advantages and disadvantages.

That being said, we still need to decide which of them is better. For us, the better coffee alternative is – MUD\WTR. Despite being more pricey compared to Four Sigmatic Mushroom Coffee, MUD\WTR offers a lot of value that it’s worth a try!

Balance of Nature Vs. Juice Plus – Which Fruit And Vegetable Supplement Is Better?

Pre JYM vs. C4 – Which Pre-Workout Powder Is Better?

LiveWell Collagen Peptides Vs. Vital Proteins – Which Is Better?

Transparent Labs Bulk Vs. Lean – How Do These Pre-Workouts Compare?

BCAA Vs. Pre-Workout – Which Is The Better Supplement?