Onnit Total Human Vs. Animal Pak – Which Supplement Is Better? 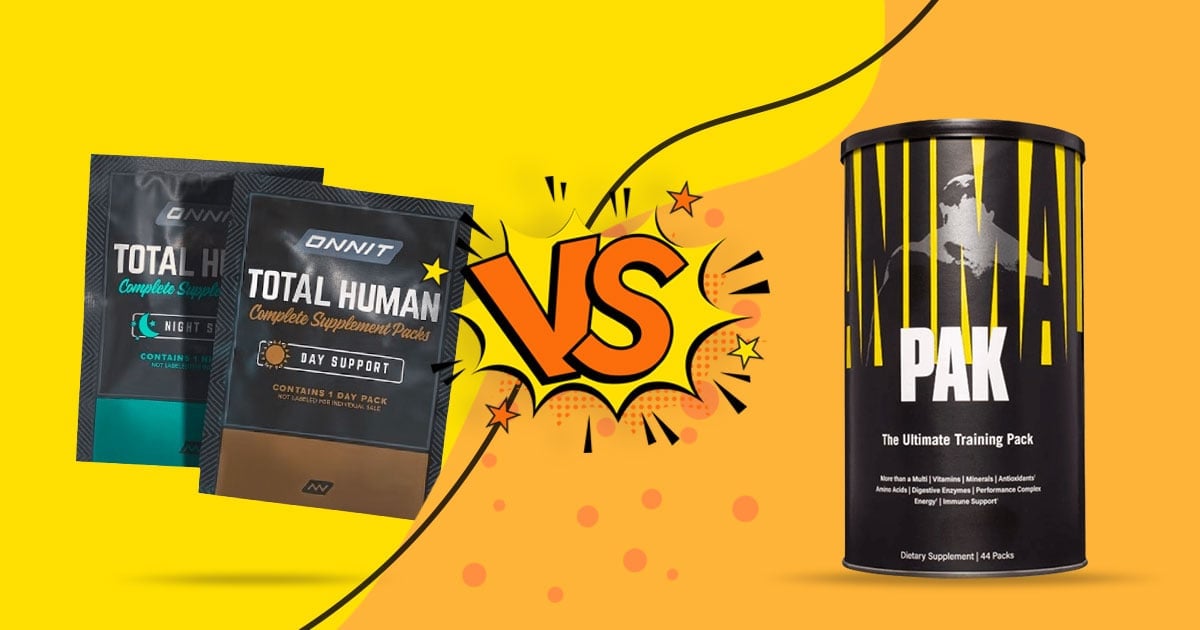 In the world of multivitamin/multimineral supplements, two that seem to stand out from most others are Onnit Total Human and Animal Pak.

While Animal Pak has been around for longer and can be considered an old-timer, with Onnit Total Human as more of the “new kid on the block,” they both are often rated high-quality by many consumers.

Of course, you may have seen these two supplements circulating the internet and wondered, “which one is best?”

Well, we’ll put your mind at ease by answering that question as we get into this comparison of Onnit Total Human vs. Animal Pak.

Before we get into the specific comparisons of Onnit Total Human and Animal Pak, it’s first helpful to generally explain each product individually.

Onnit Total Human is a complete supplement pack for day and night benefits. It is made by Onnit Labs, which was founded by the well-known Aubrey Marcus.

Unlike other multivitamins, Onnit Total Human contains only the best, well-researched vitamins and minerals for optimal performance. Plus, it contains many other ingredients and nutrients not found in traditional multivitamins, such as various amino acids, herbs/botanicals, and nootropics, in order to target specific systems that need support.

Essentially, Onnit Total Human is all of Onnit’s best-in-class formulas all wrapped into one product (Including Alpha Brain, Shroom Tech, New Mood, and more). Or we should say two, really, since there is a day pack and a night pack, with specific ingredients in each pack designed for their respective purposes.

All in all, Onnit Total Human is designed to deliver total body and mind support: for your brain, bones, joints, muscles, mood, immunity, energy, and more.

And in the other corner, coming in with a proven track record is Animal Pak, made by Universal Nutrition.

This training pack has been around since 1983, although it has gone through various modifications since then.

What hasn’t changed is Universal Nutrition’s goal to give athletes a potent supplement to serve as the cornerstone or foundation of their supplementation regimen.

Animal Pak comes loaded with vitamins, minerals, amino acids, herbs, and other performance optimizers to help fill your nutritional gaps and make sure you can be at your peak, from the inside out.

Each pack contains 11 tablets, although they’ve also recently developed a powder option for people who don’t want to take so many pills.

Now that you know a little bit more about these supplements, we’ll start to dive into the comparisons between Onnit Total Human and Animal Pak.

We’ll go over similarities and differences between ingredients, dosages, pricing, quality, and other factors.

Plus, we’ll look for anything in either product that makes them unique and/or gives one an edge over the other.

*There are other pricing options available listed below. We just listed the 30-serving, regular prices for a simple, head-to-head comparison.

Right from the start, it’s pretty clear that both Onnit Total Human and Animal Pak went to great lengths to ensure that their supplements were above and beyond traditional multivitamins and minerals.

After all, both supplements contain a wide assortment of nutrients, including the vitamins and minerals, of course, but also various herbs, nootropics, amino acids, and more.

Starting with the vitamins, one key difference we noted is that Onnit Total Human doesn’t have any vitamin A, whereas Animal Pak contains a high dose of this essential vitamin, which has antioxidant effects and many other functions.

Both of these supplements also contain solid amounts of the B-complex vitamins and biotin, but Animal Pak has much higher dosages overall for the B-vitamins; plus, it has choline.

It’s good to see both of these with high doses of B-complex vitamins since they’re vital for energy, brain health, metabolism, and other things important to athletes.

Lastly, both products have solid doses of vitamin E and K, but Onnit Total Human has the form vitamin K2, which is harder to get from the diet typically.

As for the minerals, they all contain solid amounts of most of the essential minerals, but again Animal Pak generally has higher dosages.

However, Onnit Total Human has some minerals absent in Animal Pak, including strontium and boron. Strontium is specifically designed for bone health in this formula.

In general, both of these supplements have adequate minerals in their formulations, which help with anything from energy, to metabolism, to sleep and recovery, and many other functions.

Now, let’s get into some of the fancier complexes and see what we’re dealing with!

In general, Animal Pak contains more amino acids than Onnit Total Human since they have all of these in their Amino Acid Complex.

Yet, Onnit Total Human does have at least some of the important amino acids, such as leucine, in their Onnit Fuel Blend.

Also, both products have different blends for focus/cognition.

These ingredients can help to increase dopamine, serotonin, and other neurotransmitters involved in focus, mood, and cognition.

When we continue to analyze, another key difference is that Onnit Total Human has mushrooms and algae, which are absent from Animal Pak.

We can also find a number of herbal compounds in both supplements. In Animal Pak, there is turmeric, ginger, milk thistle, hawthorne, and other herbs for digestion and detoxification. Plus, they have ginseng to enhance energy.

But Onnit Total Human seems to have more herbal compounds. It also has turmeric and ginger, as well as oregano and lemon peel.

Finally, we see that both supplements have BioPerine, which helps nutrient digestion and absorption.

Both of these supplements have antioxidant compounds, although the exact ingredients differ.

For example, Animal Pak has CoQ10, lutein, and lycopene, which are three antioxidant and anti-inflammatory powerhouses.

And Onnit Total Human has astaxanthin and quercetin, so it’s not lacking in the anti-inflammatory department either.

Lastly, they both have alpha lipoic acid, another potent antioxidant.

Now, there are also a number of other components unique to each product.

For example, Onnit Total Human has krill oil and omega fatty acids, which aren’t present in Animal Pak. These may help with inflammation as well as brain, joint, and heart health.

Plus, Onnit Total Human has specific ingredients for relaxation and sleep in their Night Pack, including valerian, chamomile, lemon balm, and tryptophan, all of which are not in Animal Pak.

Yet, Animal Pak contains a number of things not included in Onnit Total Human, such as various digestive enzymes, specific antioxidants, and their protein complex with beef and liver.

In general, these products are pretty similar since they all are geared towards maximizing both physical and mental aspects of recovery and performance.

What really makes these products different is the higher doses of vitamins and minerals in Animal Pak compared to Onnit Total Human, as well as the inclusion of functional mushrooms and krill oil in Onnit Total Human.

Other differences that are pretty noticeable include the fact that Onnit Total Human has two specific packs, a Day Pack and Night Pack, whereas Animal Pak just has one formula.

Based on the ingredients, there will be a number of similar benefits from both products, as well as some key differences.

In general, you may get the following benefits from both Onnit Total Human and Animal Pak:

However, there are some benefits specific to each product too. Regarding Animal Pak, some benefits you may get that you might not get from Onnit Total Human include:

And some benefits specific to Onnit Total Human include:

Of course, it helps to check on outside sites, as well, to confirm this.

On Amazon, Onnit Total Human has a 4.6 overall rating with almost 3,500 reviews, while Animal Pak has a 4.7 average rating with nearly 17,000 reviews.

And users of Animal Pak note that it seems to help them with energy, recovery, and performance, too, while just simply helping them reach their nutrient goals. Some people even noted that they got bloodwork done and found that Animal Pak helped restore nutrients back to normal levels.

Before choosing between Onnit Total Human or Animal Pak, it’s also important to consider noteworthy other factors, which we’ll detail below.

If you’re not a fan of taking pills, neither of these products line up with that, although Animal Pak does have a powder option.

With Animal Pak, you have to take 11 pills per day, possibly even 22 pills if you need to take 2 packs. But remember that there is also a powder option for people who don’t want pills.

Most people who use Animal Pak typically only need 1 pack, so it has a fewer number of pills, plus you have the powder option.

Animal Pak states that its product is made in a facility that processes milk, soy, eggs, peanuts, tree nuts, fish, shellfish, and wheat, so it has the potential to contain at least trace amounts of any of these allergens.

Onnit Total Human contains fish and shellfish but doesn’t appear to have any other allergens.

As a whole, it appears that Animal Pak is more specific to bodybuilders, strength trainers, and other similar athletes, whereas Onnit Total Human is geared towards more general health and wellness enthusiasts.

Additionally, Onnit Total Human has more specific ingredients for brain and cognitive health and seems geared more towards overall longevity, whereas Animal Pak is designed for maximal performance and recovery.

Now, let’s take a look at the pricing for these products.

So, you’ll pay anywhere from $0.84 to $1.12 per pack, which is honestly a really good deal considering everything you’re getting in there and the solid dosages for most ingredients.

This makes Onnit Total Human much more expensive than Animal Pak, even if you have to take two packs of Animal Pak.

Granted, Onnit Total Human has a slightly more diverse ingredient profile, and it is designed to be the only supplement you need, whereas Animal Pak is meant to be a foundational supplement.

Onnit Total Human vs. Animal Pak: Which Supplement is Better?

In truth, as much as we would like to pick a definitive winner, these supplements are both effective; it just depends on your specific needs and goals.

If you’re looking for an all-in-one supplement particularly geared towards your bodybuilding, strength training, or workout goals, then Animal Pak is the better choice.

However, if you want an all-in-one supplement for overall mental and physical performance, as well as enhanced general wellness, then Onnit Total Human is your best bet.

Lastly, due to the higher affordability of Animal Pak, this is also the best option for people who are looking just to get started with all-in-one vitamin and mineral supplements without having to break the bank.

As you can see, which supplement is “best” depends on a variety of factors, and no clear winner can be made. But there are pretty clear winners depending on what your specific goals and needs are, so just be sure to take some time to think about what YOU really want; and then this article can help you make the best choice.

MUD WTR Vs. Four Sigmatic – Which Coffee Alternative Is The Top Choice?

Morning Complete Vs. Athletic Greens – Which Greens Supplement Is Better?

TestoGen Vs. TestoFuel – Which Testosterone Supplement Is Superior?

Prime Male Vs. TestoFuel – Which Testosterone Booster Is More Effective?