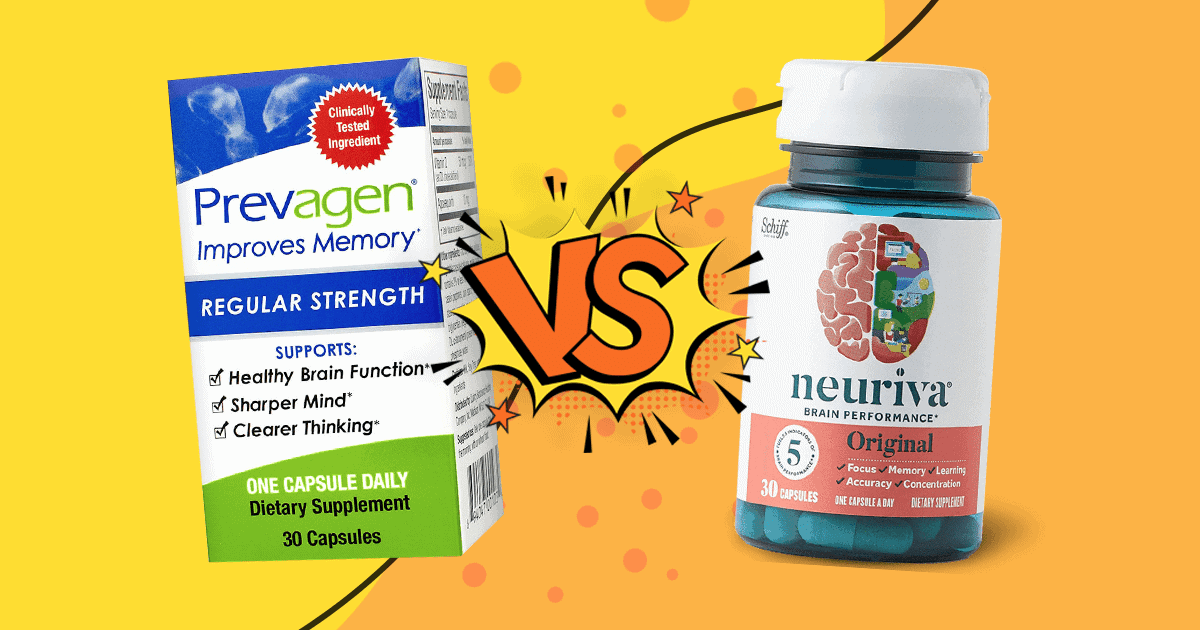 The brain is one of the most complex and mysterious organs in the entire body. Although we’ve learned so much about how it works, why it works, and what it’s capable of, we still have so much more to learn and it’s part of what makes the brain such a unique and interesting subject.

Of all the things the brain can do, it’s important to acknowledge that it’s not perfect. Like anything else, there will come times when the brain isn’t functioning the way it should be. Sometimes it’s temporary and other times it’s permanent, but it’ll happen to everyone at some point in their life.

In fact, some people might feel like their brain isn’t working at 100% capacity daily. You’ll feel like you need a mental boost just to get through the day. Luckily, that’s where brain supplements, also known as nootropics — such as Neuriva and Prevagen — can play a major role in your life.

You may now be wondering, which is better between Prevagen and Neuriva? That’s what we’re here to help you figure out. Let’s dive into this comparison of Prevagen vs. Neuriva so you can find the supplement that’s right for your brain!

Prevagen vs. Neuriva: About the Supplements

Prevagen and Neuriva are two extremely popular over-the-counter brain supplements that can give you that mental boost you’ve been looking for. They’re available online, but you can also find them both in a variety of retail stores all across the country. Trust us, they’re everywhere.

Since there’s a good chance you’ll come across these two supplements when searching for a nootropic or brain supplement for daily use, we’re going to detail everything you need to know about them below — including their formulas, what’s different, what’s similar, and much more!

Prevagen is a brain-boosting supplement you’ve likely seen before when walking down the grocery aisle. It’s clinically proven to help aid memory loss in the elderly and supports healthy brain function, a sharper mind, and clearer thinking. You only need one capsule every day.

Prevagen is made by Quincy Bioscience, a biotechnology company that’s also known for their NeuroShake product. Their Prevagen formula is available in Regular Strength, Extra Strength, and a Professional Formula. You can choose to take it as a tablet, capsule, or chewable.

You can purchase Neuriva online directly from the manufacturer or you can find it at some of your favorite national retail stores, including Walmart, Walgreens, CVS Pharmacy, Rite Aid, and Kroger. It’s easy to find and even easier to take, making it a popular supplement choice today.

Neuriva is brought to you by Schiff Vitamins, a company that also brings you brands such as Airborne, Move Free, MegaRed, Digestive Advantage, and Schiff Nutrition. The Schiff name has been around for over 80 years and was founded by Eugene Schiff, an immigrant from Hungary. 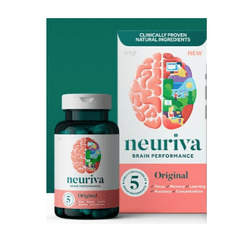 Save up to 10% on NeurivaWe scour the web for the best deals on supplements. Want to get up to 10% off your order of Neuriva? Click the button below to get this deal!GET THE DEAL

They’re also easily found in stores across the country, have a variety of different formulas to choose from (outside of the original formula), and cost around the same amount per 30-day supply. If you didn’t take a closer look, you would have a hard time making a final decision.

With that said, that’s about all they have in common. They don’t share any of the same ingredients and they’ll appeal to completely different people. While they both improve cognitive function, they don’t utilize the same nutrients in doing so. They’re quite far from being similar.

Prevagen and Neuriva are brain-boosting supplements that you’ve likely come across before, whether you’ve been walking down the aisle at your favorite local pharmacy or watching TV and saw one of their commercials. They certainly seem to pop up often, no matter where you are.

Now that we understand a little background behind each of these supplements, we can start to dive into the formulas and discover what’s different — and similar — between the two. As we continue to learn more, you’ll notice that there are much more differences than similarities.

As you can see, both Prevagen and Neuriva are intended to improve cognitive function in different ways. They each come with their own unique benefits that will appeal to different groups of people. The hard part is trying to figure out which one is best for you and your body type.

Most people don’t understand what these ingredients do and how they’ll react with everyone’s unique body. Don’t worry, we’re here to help. We’re going to detail some of the most prominent benefits of each formula and how their ingredients add to these benefits, that way you can make as educated of a decision as possible.

There isn’t much to unpack with Prevagen, especially since it only contains two ingredients. It’s a simple formula for those that want something quick and easy. With that said, it won’t work for everyone since a lot of the studies done on it won’t come with a lot of scientific evidence.

The 50 mcg of Vitamin D will appeal to those that don’t get enough of it each day. The body produces Vitamin D when the skin is exposed to sunlight. It’s recommended that we get 20mcg of Vitamin D per day from food, so it’s more than double what we need — which is good and bad.

The 10mg of Apoaequorin is supposed to help reduce cognitive decline, which we all experience as we get older. This includes our memory and ability to learn. Apoaequorin is a protein found in jellyfish. When combined with Calcium, it produces a blue light, which is why jellyfish glow.

Much like Prevagen, Neuriva is a simple formula that doesn’t have a whole lot to unpack. That can be both good and bad, depending on what you’re looking for out of a brain supplement. Keep in mind, some people don’t need a list of 15 ingredients to give their brain the nutrients it needs.

The 100 mg of Phosphatidylserine is extremely beneficial to brain health. It’s a phospholipid found naturally in the body and is responsible for protecting brains and cell membranes, as well as acting as a messenger between brain cells. Overall, it keeps your mind and memory sharp.

The 100 mg of NeuroFactor is beneficial to the production of Brain-Derived Neurotrophic Factor (BDNF), a neuroprotein that improves overall brain health. NeuroFactor is a patented form of whole coffee cherry extract from the coffea arabica fruit, but it won’t really contain any caffeine.

In addition to the supplement formulation for both Neuriva and Prevagen, it’s always a good idea to take a look at the various reviews, testimonials, and feedback from customers to get a better feel for the supplement as a whole. It gives you an idea of other people’s experience with it.

Believe it or not, Prevagen and Neuriva come with completely different feedback and aren’t necessarily perceived the same way. It’s clear that customers prefer one over the other and it’s something the FDA would agree with, as well. Don’t worry, we’ll explain in more detail below!

Prevagen has a ton of positive reviews listed on their official website, but they aren’t quite transparent with negative reviews — so much so that they don’t even show them. With that said, you can read a lot of people’s stories about how it helped, but you won’t get the full picture.

If you head over to Amazon, you’ll start to see some of the negative reviews — which are bound to occur with any supplement you take. They still have a 4.3/5.0 star rating with well over 5,750 verified customer reviews. There were reports of bad side effects and loss of focus on off days.

Prevagen has also been involved in a variety of class action lawsuits and complaints over the years due to false advertising. The FDA filed a complaint in 2017 and a separate class action lawsuit was settled in 2020. That’s not to say it won’t work, but their claims might be stretched.

Neuriva is a little more transparent with their reviews listed on their official website. They have a total of 61 reviews and have garnered a 4.1/5.0 star rating. 35 of those ratings were a 5.0, while those that ranked lower complained it didn’t do much — though most of them didn’t stick with it.

Neuriva is also available on Amazon. They have 4.3/5.0 star rating on Amazon with over 1,400 verified customer reviews. 66% of people rated it a 5.0 and 17% rated it a 4.0. Most of the people that rated it lower than 4.0 stars complained it didn’t do much for cognitive function.

The good news with Neuriva is they haven’t run into any class action lawsuits or complaints by the FDA due to false advertising. Their ingredients come with more scientific evidence than those of Prevagen, which means it’s much more credible and can be trusted more than others.

Prevagen vs. Neuriva: Other Considerations

We’ve learned a lot about what makes Prevagen and Neuriva so popular. They might not be two of the most prominent or effective brain-boosting supplements on the market, but they’re certainly two of the most basic and accessible ones — which has to stand for something.

With that said, there are a few things we left out about the two supplements — other than their formulation, the company behind them, where you can purchase them, and what the benefits are. Don’t worry, we’re going to detail everything else you need to know about them below!

If we’re looking at value, Neuriva is certainly the more valuable of the two. The two ingredients included in the formula are far more trustworthy, effective, and credible. Since it’s also the cheaper of the supplements, there’s definitely more value to be had with the Neuriva formula.

Save up to 10% on NeurivaWe scour the web for the best deals on supplements. Want to get up to 10% off your order of Neuriva? Click the button below to get this deal!GET THE DEAL

Prevagen vs. Neuriva: Which Supplement Is Better?

Neuriva and Prevagen are two brain-boosting supplements that are available pretty much anywhere you look — online or in retail stores. With that said, there’s a good chance these two supplements will find a way into your selection process when searching for a new supplement.

If your decision comes down between the two, we would 100% recommend Neuriva over Prevagen. Not only is it the cheaper of the two, but the two ingredients included have more scientific evidence supporting them than Apoaequorin, which is found in Prevagen. If you do want to learn more about each supplement, you can read our full review of Prevagen here and our full review of Neuriva here.

With all that said, there are certainly more competitors and alternatives out there. For example, Mind Lab Pro and Performance Lab Mind are two of the most effective nootropics on the market available today. If you’re okay with spending a little more every month, they can do a lot for you!

Athletic Greens Vs. Organifi – Which Greens Powder Is Better?

Onnit Total Human Vs. Athletic Greens – Which Is Best?

Chirp Wheel Vs. Foam Rollers – Which Massage Device Is Better?

Seed Vs. Ritual Synbiotic – Which Probiotic Is Superior?

Provasil Vs. Qualia Focus – Which Supplement Is Better For Brain Boosting?