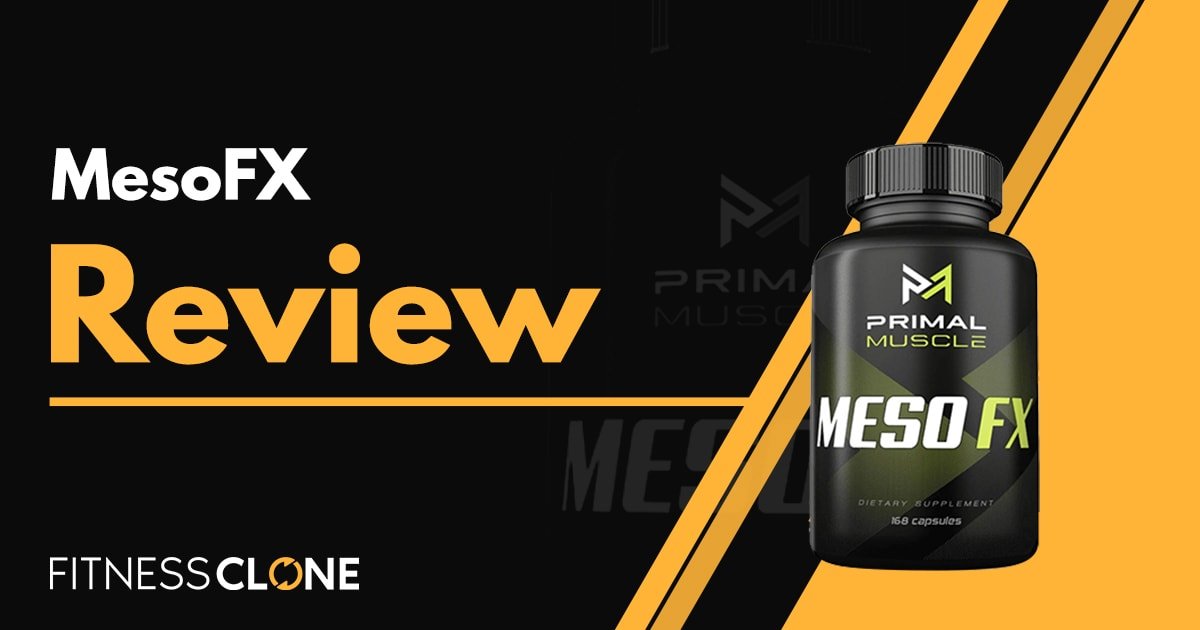 Sometimes the same old regimen of protein, creatine, pre-workout, and so forth can get kind of boring for some men. They’re looking for something a little more “out there”; some sort of “secret” and potent supplement that can deliver much better results than the standard protocols.

There are many supplements out there that claim they can do just that, but do they actually deliver results? That’s the question. So, we’re going to take a closer look at one muscle-building supplement, MesoFX, to see if it’s up to par. In this MesoFX review, we’ll go into detail about this supplement’s ingredients, benefits, claims, pricing, and more so you can find out if it’s worth adding to your routine.

Ready to learn more? Let’s get started with this MesoFX review! 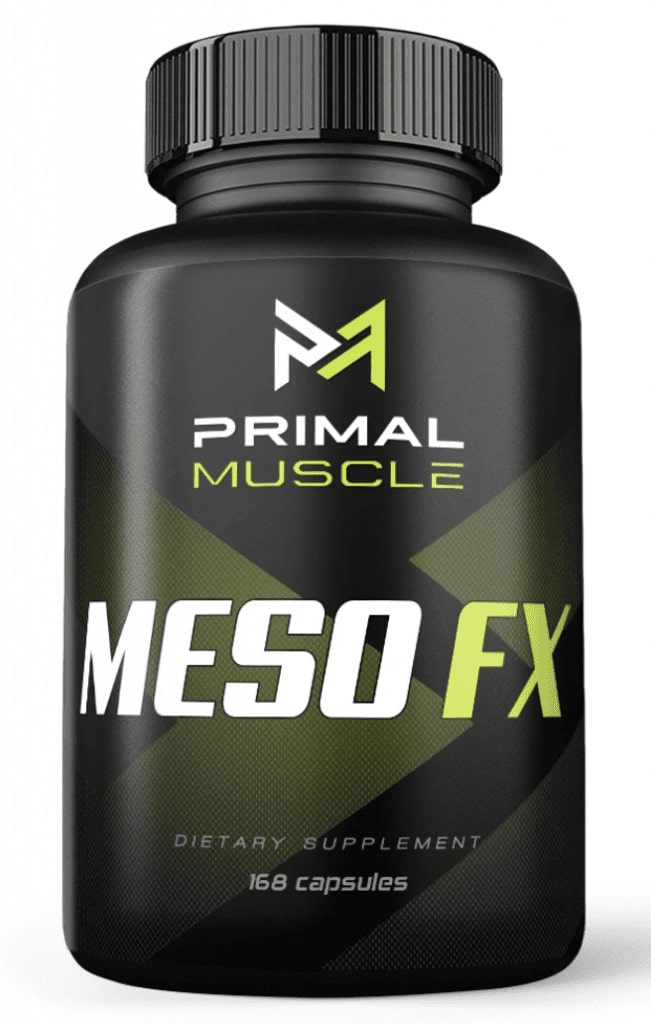 The creators of MesoFX are Primal Muscle. The same creators as Primal Surge, this supplement company always has some creatively-worded and enticing headlines for their supplements, and the case is no different for MesoFX. According to Primal Muscle, MesoFX is supposed to consist of secret Russian anabolic ingredients designed to deliver the ultimate results in terms of muscle mass and strength. It was supposedly used by Russian powerlifters back in the 1980s to help them succeed in the Olympics. Nowadays, this supplement is designed for hard-training men who want to see explosive results.

MesoFX is advertised to deliver loads of muscle and increase strength dramatically for those that take it. Its supposedly secret and relatively unknown ingredients are designed to promote a potent anabolic response in hard-training men, which in turn would lead to massive increases in muscle mass, strength, and power. 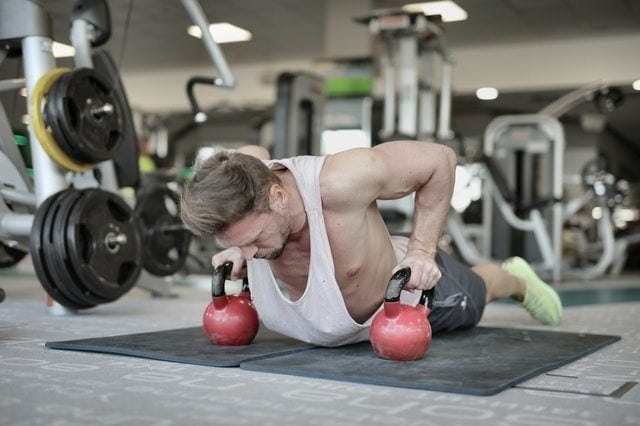 These claims can make any man’s mouth water. But will the feast of results from MesoFX actually be brought to the table? Read on to find out!

So, what are the actual ingredients in this “secretive” supplement? Let’s take a look.

There is technically just one ingredient in MesoFX, the MesoFX Proprietary Formula (1,365mg), which consists of the following: 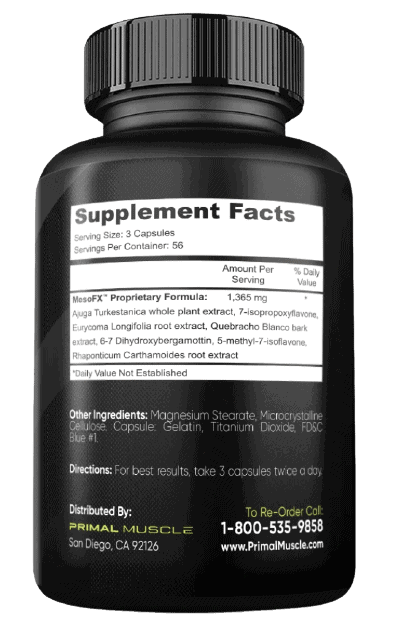 A lot of these ingredients here certainly sound a little out there. Now, let’s see if they are effective.

Ajuga turkestanica (A. turkestanica) is a medicinal plant that has been used for many years for a variety of ailments. Related to exercise performance, certain compounds in it are known to have anabolic effects. These compounds are mainly various phytoecdysteroids, such as turkesterone, and also phytosteroids, which essentially promote anabolic effects by acting on steroid receptors. These compounds in this plant are known to stimulate protein synthesis in the liver and increase protein synthesis in skeletal muscle cells, which could lead to greater gains in muscle mass. Yet, most of the research has been done in mice and rats, and there needs to be more overall research, especially in humans.

The next ingredient is 7-isopropoxyflavone, also known as ipriflavone. This compound is in the group of chemical substances called isoflavones, and it has a number of potential anabolic effects. Mainly, ipriflavone can increase luteinizing hormone (LH), which in turn can increase the production of testosterone and other steroid hormones. Additionally, ipriflavone acts as an aromatase inhibitor, and since aromatase converts testosterone to estrogen, inhibiting this enzyme can result in higher free and total testosterone.

MesoFX also includes an extract from the roots of Eurycoma longifolia, most commonly known as Tongkat Ali. Tongkat Ali is found mainly in southeast Asia, and certain peptides from this plant can stimulate the release of testosterone from its binding proteins, which means that it leads to higher free testosterone. In turn, Tongkat Ali is proven in most research to increase libido and overall sexual function in men, and it also can increase energy and mood; decrease fatigue and stress; improve cortisol to testosterone ratios; and enhance sports performance and weight loss. All in all, Tongkat Ali appears to give men a boatload of benefits they desire.

Up next is another plant called Quebracho Blanco. Extracts from the bark of this plant are known to contain a compound called yohimbine, which is where most of the proposed effects stem from. The yohimbine in this bark acts as an alpha-2 adrenoreceptor antagonist, and it primarily produces stimulant-like effects. In research, it has been shown in some studies to help with fat loss and improve erections, but there isn’t enough research in general, let alone specifically for muscle and strength increases.

Moving on, let’s take a look at 6-7 dihydroxybergamottin (DHB), which is a compound isolated from grapefruit juice. DHB primarily works by inhibiting CYP3A activity. Normally, CYP3A is involved in the metabolism of drugs and other substances, such as steroid hormones, where it breaks them down and removes them from the body. So, inhibiting this activity would lead to more availability of whatever substances are usually broken down, including steroid hormones. Therefore, it should lead to higher uptake of the other ingredients here, which could also lead to greater testosterone levels.

MesoFX has another compound from the isoflavone family in 5-Methyl-7-Isoflavone. Just like ipriflavone, 5-methyl-7-isoflavone is able to inhibit aromatase, and it may increase LH, both of which should lead to higher free and total testosterone levels. Yet, whether this will specifically improve muscle mass or strength to a significant degree is not fully determined.

The final ingredient in MesoFX is Rhaponticum carthamoides, which is another herb. Located primarily in Siberia, it has a history of use in Russian and Soviet athletes. The key beneficial compounds in R. carthamoides are various steroids, especially ecdysteroids. These compounds may increase protein synthesis and fat metabolism, thereby improving body composition. Initial research shows that supplementing with R. carthamoides alongside resistance training can improve protein synthesis, muscle mass, and performance, although more research is needed.

Overall, MesoFX should likely work as a muscle and strength supplement for men. Even though there isn’t as much research as I’d like to see, many of the ingredients in here do have at least some research behind them, showing that they can positively affect anabolism and overall male hormonal health and performance. The most well-researched ingredient is Tongkat Ali, although most of the other ingredients have at least a decent amount of research showing that they work too, such as the isoflavone, R. cartamoides, DHB, and A. turkestanica. 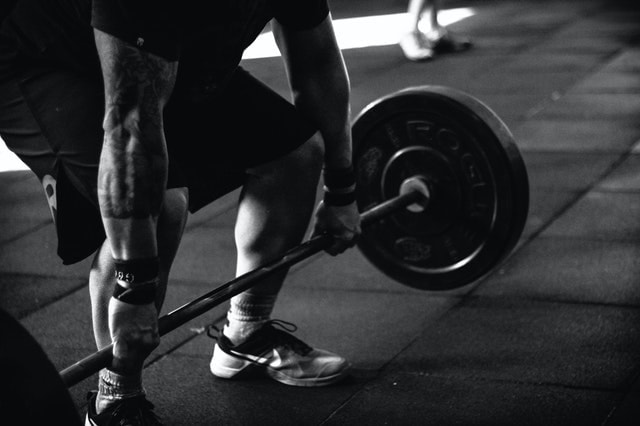 However, MesoFX is just a proprietary blend, so you don’t know how much of each ingredient you’re getting in this product. Therefore, it really can’t be determined how well it will work. There are other muscle-building supplements out there with more transparent formulas, such as Enhanced Athlete Arachidonic Acid or Anvarol. So if you do need to know your exact amounts, that is something worth considering. All in all, the main point is that you should get at least some benefits from MesoFX.

This leads me to my next point about claims versus reality. Primal Muscle really likes to advertise some extreme effects, and they say that MesoFX will give you massive increases in muscle mass, strength, and power in a short period of time.

I wouldn’t expect any of these powerful results, but you should get at least some benefit from this product. With its combination of ingredients that inhibit aromatase, increase testosterone, stimulate protein synthesis, and overall increase anabolism, you likely will experience increases in size, strength, and power, just not to the degree that Primal Muscle claims.

Who is MesoFX Best For?

MesoFX is primarily designed for hard-training men who want to increase muscle size and strength. Yet, I wouldn’t recommend it to anyone who is currently in or wants to eventually be in any sort of professional or competitive sports organization/association. This is because some of the ingredients are being considered as doping agents, so you could be banned from competition when taking this product. But if you’re just a man who trains recreationally and wants to see if you can get an additional boost in overall performance, this is worth looking into.

MesoFX may come with some side effects for some people, such as the following:

If you want to give MesoFX a shot, you can buy it on the official Primal Muscle website here. 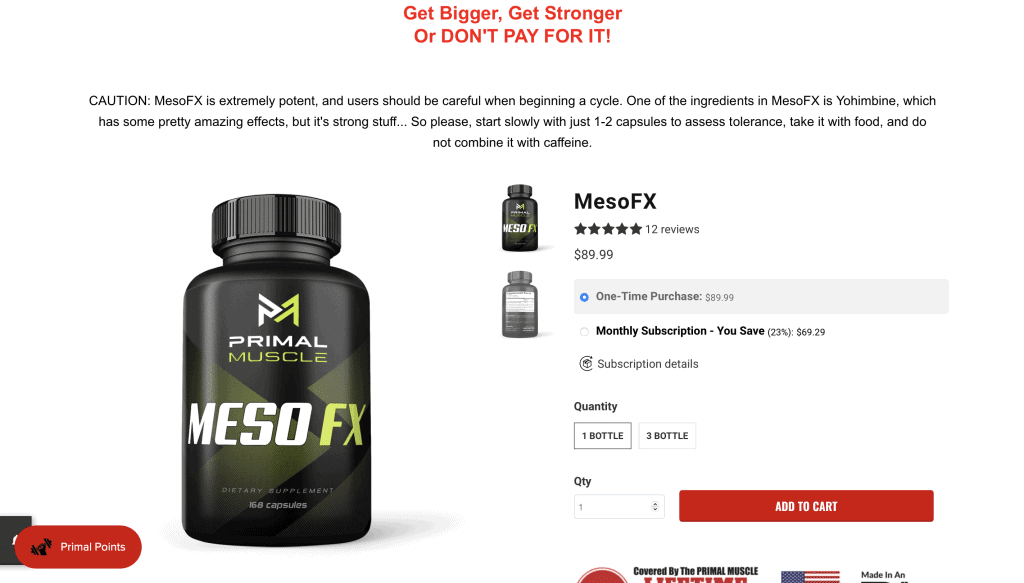 Each bottle contains 56 servings (168 capsules) and costs $89.99 for a one-time purchase. You can also choose the monthly subscription option in order to save 23%, which lowers the price to $69.29.

Alternatively, you can buy three bottles at once for a price of $209.97, which is roughly the same price per serving as the monthly subscription option.

So, you clearly save quite a bit of money on the last two options as the original price per serving is about $1.60, but it goes down to about $1.20 with the subscription or bulk options.

All in all, MesoFX is reasonably priced, especially the subscription and bulk options.

Klean Multivitamin Review – Is This The Right Supplement For You?

BPN Strong Reds Review – Is It Worth Buying?

Iaso Tea Review – Can This Tea Boost Your Energy?