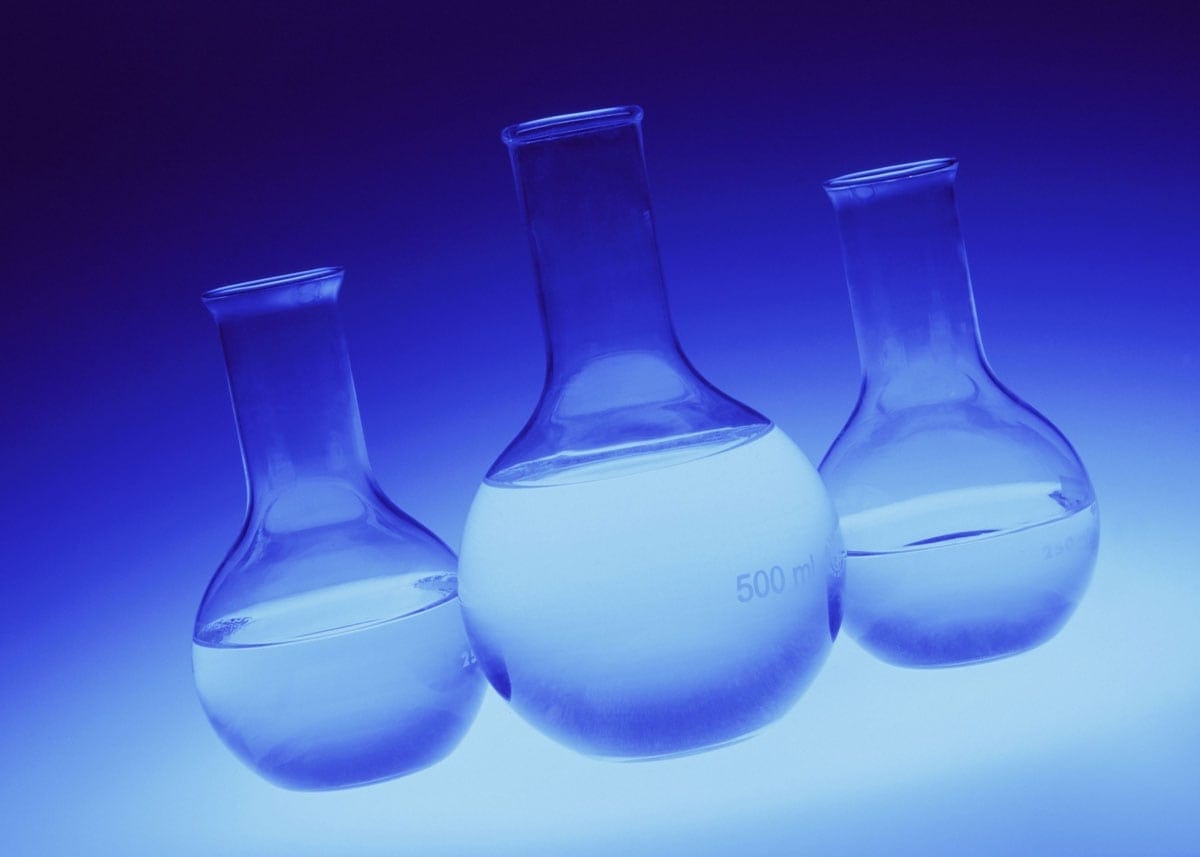 Ketone esters are a relatively new supplement to hit the market, and they are one of the most interesting supplements that we’ve taken a look at for a few reasons.

Ketone esters are growing in popularity, and they are being studied and written about more frequently. For the sake of today’s article, I want to take a “layman’s” approach to analyzing ketone esters. I don’t want to bog you down with too much of the technical science. Instead, I want to help you understand what ketone esters are, how they work, and how they compare to similar products. From there, you should be able to decide if they are worth trying.

What are Ketone Esters?

Traditionally, our bodies burn carbohydrates first and resort to burning fat once carb stores are depleted. When your body enters ketosis, it starts burning stored fat for energy. You can achieve ketosis through fasting or by limiting your carb intake. This is the rationale behind the ketogenic diet. By limiting your carb intake, you force your body into a state of ketosis, where it burns fat instead of carbohydrates.

People follow ketogenic diets for a variety of reasons, but there seem to be two primary motivators.

The first is weight loss. If you are burning stored fat, you are losing weight.

The second benefit relates to mental performance. Ketones are thought to be a cleaner energy source, and many people who enter ketosis report increased energy and improved mental clarity (myself included).

So, how does this all relate to ketone esters?

When your body is in a state of ketosis, it turns fat into ketones, and these ketones become your body’s energy supply. These ketones are known as endogenous ketones (internal) because they are produced inside the body.

There is a separate class of ketones known as exogenous ketones (external), which come from outside the body (i.e., supplements). Ketone esters are a form of exogenous ketones designed to mimic some of the benefits of the natural state of ketosis. 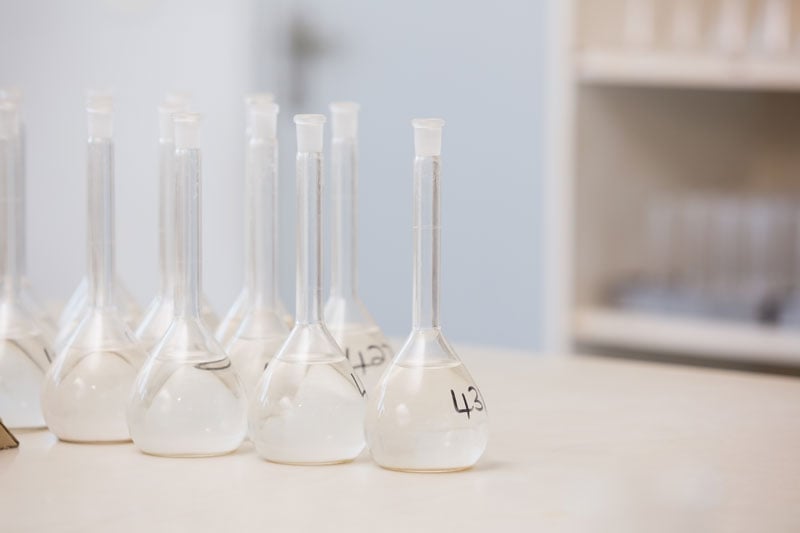 As promised, my goal is to keep these explanations simple and free from scientific jargon. If you prefer to do more in-depth research, you can visit a site like PubMed or one of the more technical guides on the internet.

For now, let’s look at some of the benefits of ketone esters.

Ketone esters are designed to mimic some of the benefits of the keto diet. Depending on the dosage you take, ketone esters may even be able to amplify these benefits.

I will share my personal experience with ketone esters shortly, but the following are the purported benefits:

It should be noted that you do not need to follow a ketogenic diet in order to use ketone esters.

Before we move forward, we should address one other type of exogenous ketone supplement on the market: ketone salts.

Ketone salts are far more ubiquitous and much more affordable. There are dozens of companies that offer ketone salt supplements (such as Perfect Keto). Whereas ketone ester is about $10-$30/serving, ketone salts can easily be found for ~$2/serving.

So, what’s the difference? If ketone salts are so much cheaper, why not just use them instead?

While esters and salts are both forms of exogenous ketones, they are actually quite different. The main difference is how they are absorbed by the body.

While both salts and esters can increase your blood ketone levels, esters are far more effective. Esters better mimic natural ketone bodies and are better recognized by the body. If you want to learn more about the difference, this is a good resource.

If you are looking for the more powerful/effective option, ketone esters are the way to go.

If you are looking for the more cost-effective option, ketone salts may be the right choice for you.

As mentioned earlier, there are only two companies that offer ketone ester supplements on the commercial market: HVMN and KetoneAid. While KetoneAid was launched first, it’s clear that HVMN is dedicated to being the leader in the space. They have even fired some shots at KetoneAid. HVMN claims to offer a safer, more transparent product that is subject to rigorous testing. Ketone Aid also claims to have a superior product, stating lesser dilution, balanced pH levels, clinical trials, and lower costs.

I have personally only tried Ketone Aid products, but I will update this article if I end up trying the HVMN Ketone Ester.

Here’s what you need to know about each product.

KE4 is the original ketone ester drink. It is available in 60ml bottles 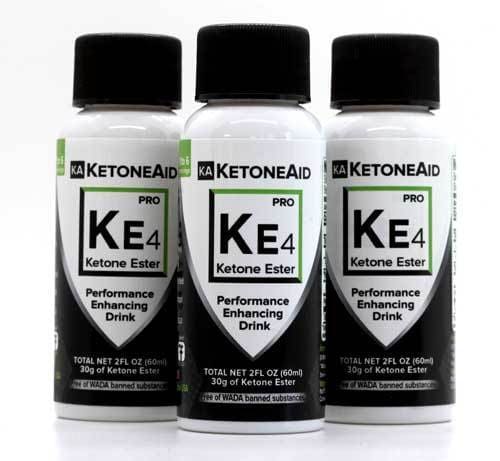 that contain 30 grams of ketone ester each. You can purchase three bottles for $94.95, bringing the cost per bottle to about $32. The cost per serving will be determined by how much you consume. Every individual will have their own unique preferences. Ketone Aid claims that some users will use as little as 5ml/day, but I would wager that most use more.

KE1 is a relatively new product from KetoneAid. This formulation combines both ketone salts and ketone ester. Each bottle contains 2.5 grams of ketone ester, 1.25 grams of ketone free acid, and 1.25 grams of ketone salts. KE1 comes in 2oz shots (similar to 5-Hour Energy), and you can get 24 bottles for $159.95 (~$6.70/bottle). You end up paying more per gram of ester, but you get a fixed-serving shot that also includes other types of exogenous ketones. While KE1 and KE4 have a few distinctions, the main one is the price. KE1 is cheaper overall (unless you were really only using 5ml/day of KE4).

HVMN offers a single ketone ester product, but, unlike KetoneAid, the company offers a range of other performance supplements. Fun fact, HVMN was formerly known as “Nootrobox,” and the founders made a pitch on Shark Tank.

We have reviewed some of HVMN’s products in the past (such as the Nootrobox nootropics). We haven’t done a standalone review of the company’s ketone ester, but here’s what you need to know.

HVMN Ketone Ester comes in 65ml bottles that contain 25 grams of ketone ester each. You can purchase three bottles for $99, bringing the cost per bottle to $33. This is in line with KetoneAid’s pricing; however you get 5 grams less ketone ester per bottle. 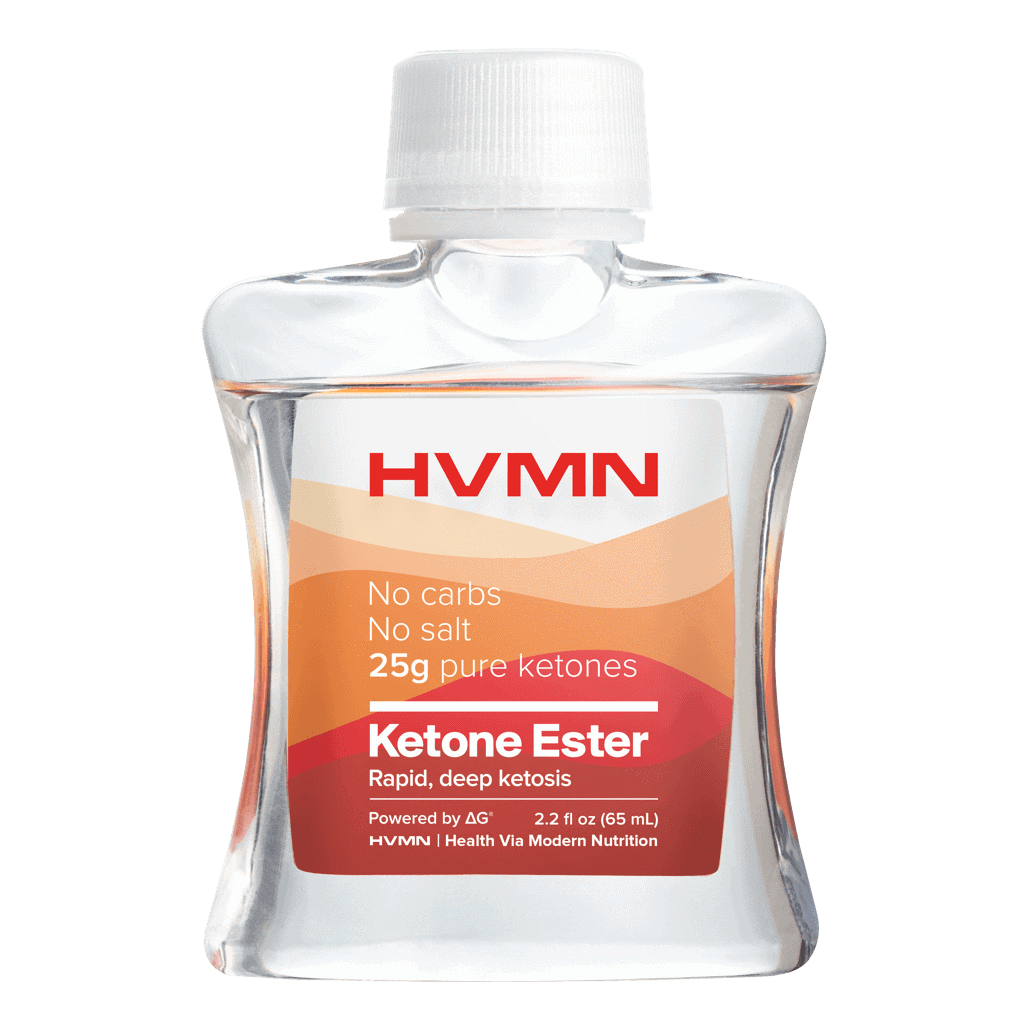 Each bottle is intended to be a full serving of 25 grams of ketone ester. While you could split the bottle up into multiple servings (as KetoneAid mentions), it seems that HVMN promotes taking the full bottle at once. I actually think you’re likely to get more out of the supplement with a larger dose, so I respect HVMN’s approach to realistic serving sizes.

Which Supplement is Better?

Both KetoneAid KE1 and HVMN Ketone Ester are virtually identical in that they both contain the same active ingredient (D-bhb). Both companies make a few claims as to why one is better than the other, but the reality is both supplements are likely to have similar effects. In full disclosure, I have only tested KetoneAid’s products, but, as I mentioned, both companies use the same active ingredient.

HVMN claims to have better transparency and safety measures, while KetoneAid claims to have better pricing and formulations. I cannot definitely say which one is better, but I’d wager that most people will experience similar results from both. The question comes down to whether or not ketone esters are right for you.

Both products have two things in common: they are expensive and taste terrible. This is not due to the formulations, but the nature of ketone esters themselves. Ketone esters are very expensive to produce, and they don’t taste great.

My Experience With Ketone Esters

There are a handful of scientific studies and technical articles you can read if you want to know about how ketone esters work. I’ve done my best to explain everything simply, and now I’m going to share my personal experience. 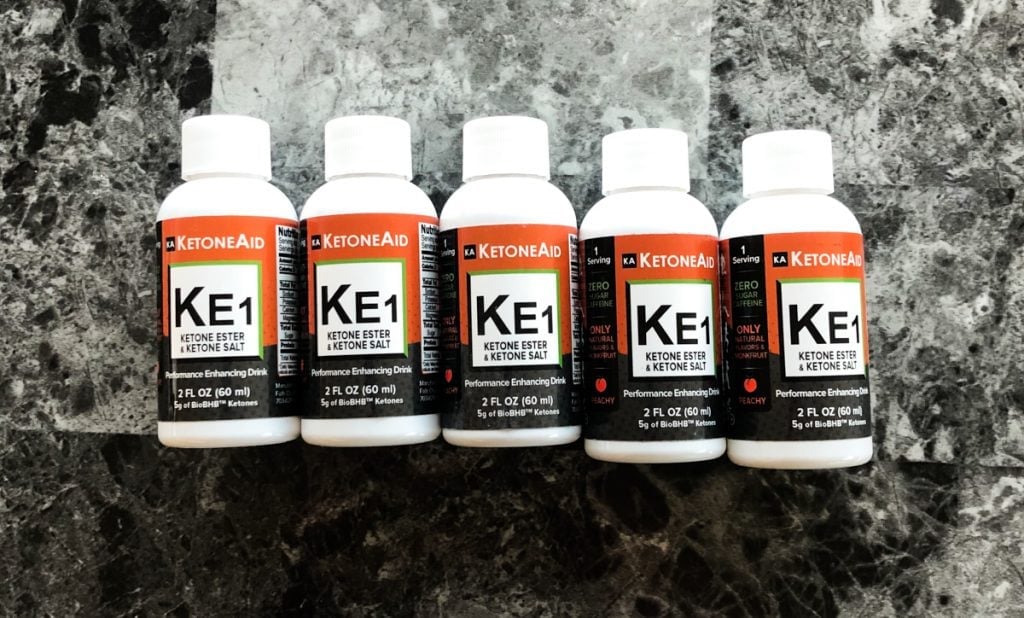 I have tried both KE1 and KE4 from KetoneAid. I tested them out in a few different contexts to see what the best application would be. Here are a few of the different times I took the products: 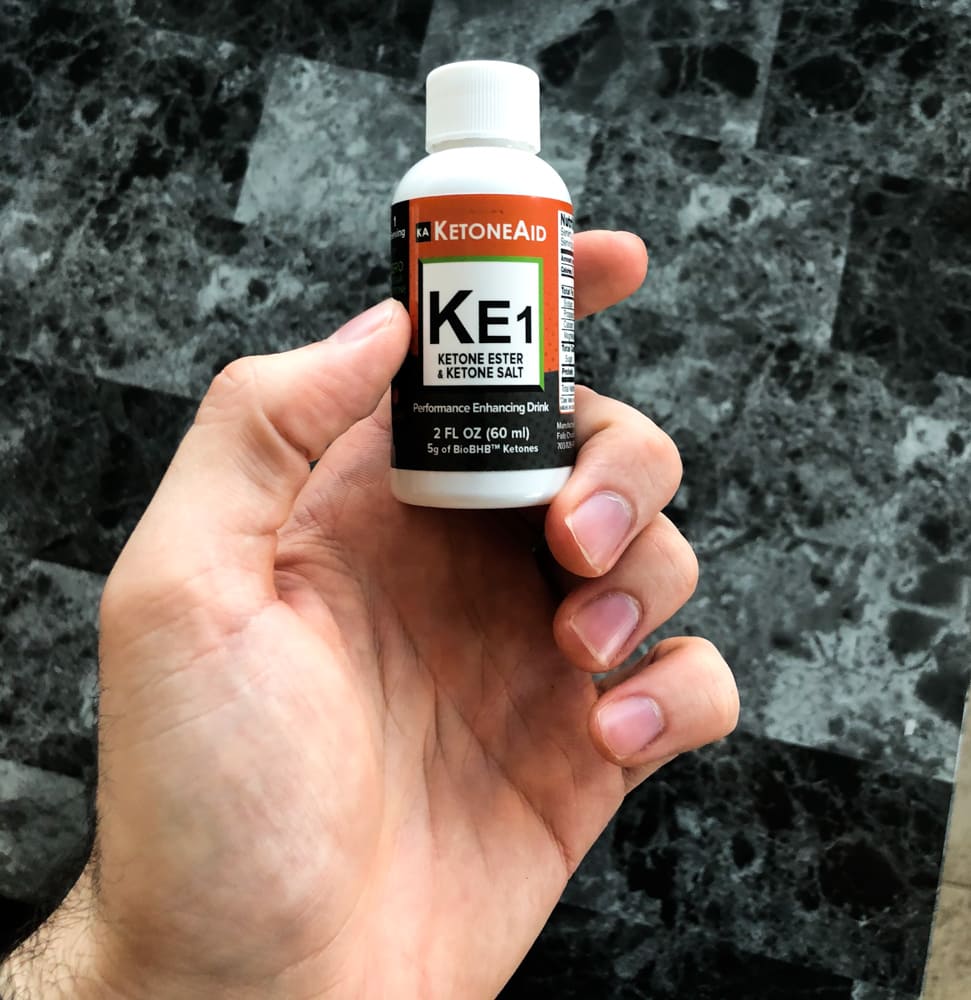 So, what were the results?

Please note that this is my own personal experience, and the experience will vary by user. Here are the results from each of my use cases:

Overall, I noticed marginal benefits, but nothing that really justified the cost. This leads to our last section.

For those interested, here is how the keto ester impacted my blood ketone levels. I used a Keto Mojo blood ketone tester to run the tests.

Below is the test I took before taking a full bottle of KE1. As you can, it reads 2.9 millimolar, which is already pretty high. I was already in ketosis from a combination of following a keto diet and intermittent fasting. 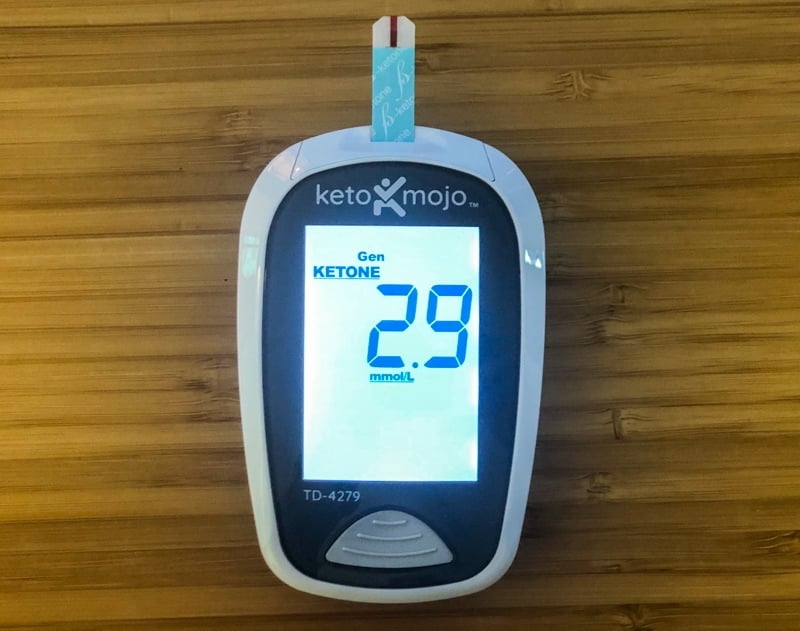 Below is the test I took 30 minutes after drinking a full bottle of KE1. My blood ketones jumped to 4.1 millimolar. There’s no doubt that the product does have an impact on blood ketone levels. 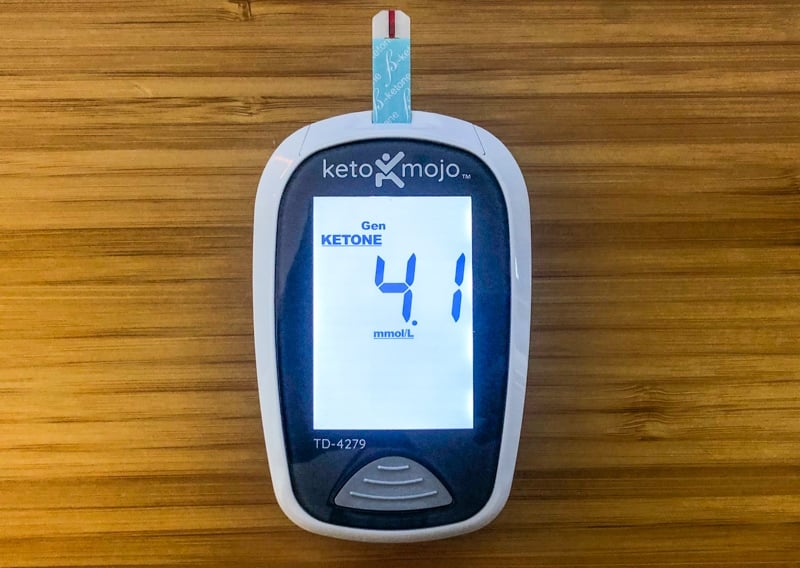 Are Ketone Ester Supplements Worth the Money?

Ketone ester supplements cost anywhere from $7-$33/serving ($7 for KE1 and $33 for a full serving of HVMN Ketone Ester). Let’s just average that out to $20/serving. I’m no stranger to expensive supplements, but ketone esters are in a league of their own.

At lower prices, I may be less critical of the supplements I take. For example, ketone salts are only $2/serving, so I’m more accepting of the subtle benefits. Likewise, I may take a cost-effective vitamin that offers long-term health benefits even if I don’t notice them right away.

That said, at $20/serving, I expect to experience super noticeable benefits from a supplement. Unfortunately, that wasn’t the case with the ketone esters I tried, and I am unlikely to purchase them again.

If you have never tried ketone esters, they may be worth trying, if not just to satiate your curiosity, but I have a hard time seeing how these are practical for regular use.

If you are looking for a ketone ester alternatives, you have a few options.

The first is just avoiding exogenous ketone supplements altogether. If you want to reap the benefits of ketosis, your best bet is to follow a ketogenic diet. You don’t really need any supplements to help you get into ketosis. There are other supplements you can take to support your keto diet, but they serve different purposes.

Your second alternative is ketone salts. You can find BHB keto supplements for $2/serving or less. While ketone salts are not as powerful as ketone esters, they are far more affordable, and they share some of the same benefits.

If you are trying to improve cognition and mental performance, you may consider trying a nootropic, such as Mind Lab Pro or Alpha Brain.

Glutamine Benefits – What Can This Supplement Do For Your Health?

How To Improve Your Stamina – Increase Your Energy And Physical Performance

Best Supplements For Brain Health – 4 Top Picks For Your Brain