Focus Fast Review – Should You Try This Nootropic Supplement? 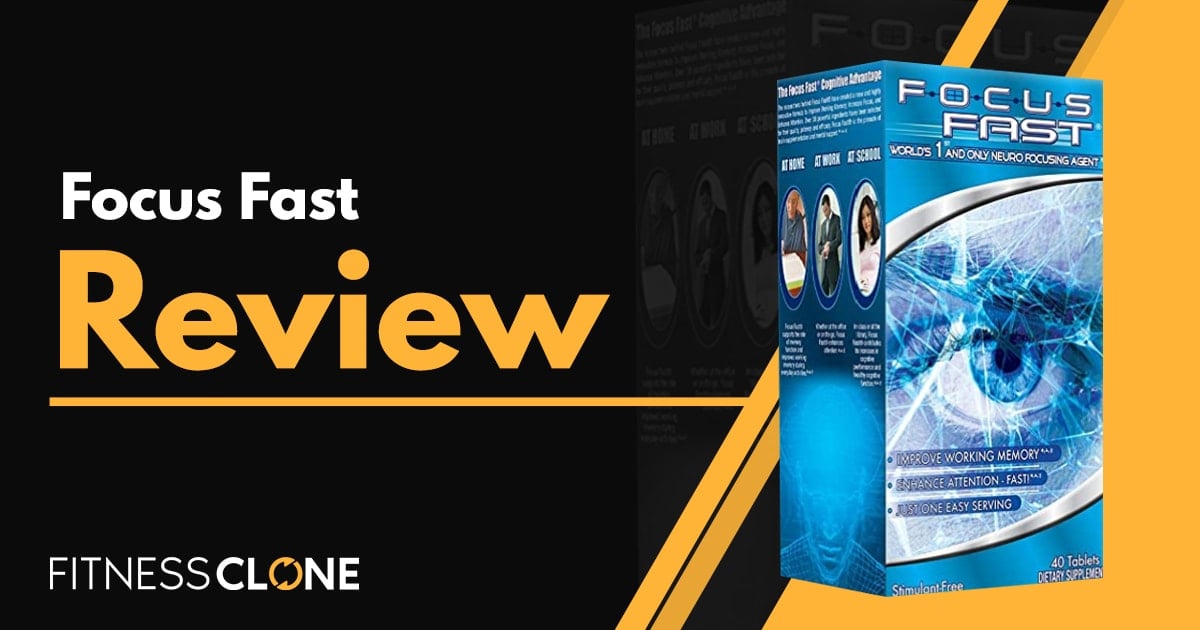 In a world where there’s seemingly an endless number of distractions, it can take quite a lot of willpower and motivation to stay on task and get through the day’s business.

On top of this, many people seem to be busier than ever, which is why many people are now turning to nootropics or other cognitive-enhancing supplements to assist their daily activities.

One such nootropic supplement is called Focus Fast. This nootropic claims to increase focus, promote better memory, and enhance attention. But, does it live up to all the claims? In this Focus Fast review we’ll discuss everything you need to know about this nootropic, its ingredients, and whether or not it’s effective for your focus and beyond. 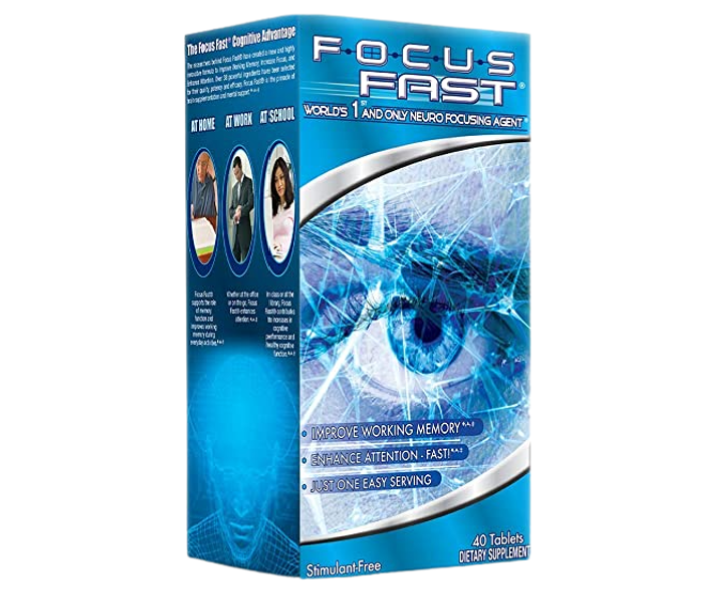 Focus Fast is designed to be the “World’s 1st and only neuro focusing agent”. The new and innovative formula in Focus Fast has over 38 ingredients, all chosen for their quality, potency, and effectiveness. The various nootropics in Focus Fast are supposed to act synergistically to optimize cognitive performance and put you at the pinnacle of mental support, with improved memory, attention, and more.

There are three primary benefits of Focus Fast: 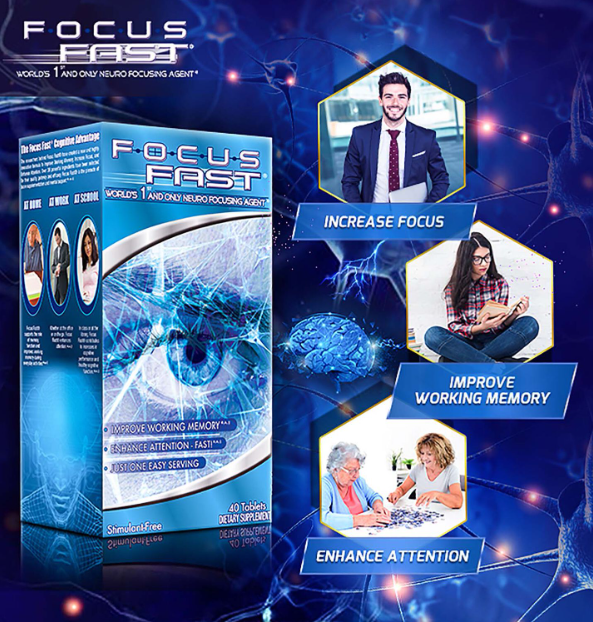 With a product called Focus Fast, it’s no surprise that it’s designed to increase focus. They say this is due to the Neuro Focusing Technology that enhances cognitive performance through multiple pathways.

Focus Fast is also advertised to improve your working (or short-term) memory by up to 10%, so you can be sharper at work, school, or even at home.

Finally, Focus Fast is promoted to enhance attention through a number of different nootropic ingredients, so you can get dialed in and be more efficient.

So, is the “World’s 1st and only neuro focusing agent” really a standout cognitive enhancer? Let’s find out.

Focus Fast contains over 38 ingredients, including vitamins, minerals, and many ingredients in their complexes and blends. Here’s what’s in each serving (2 tablets) as indicated by the label. 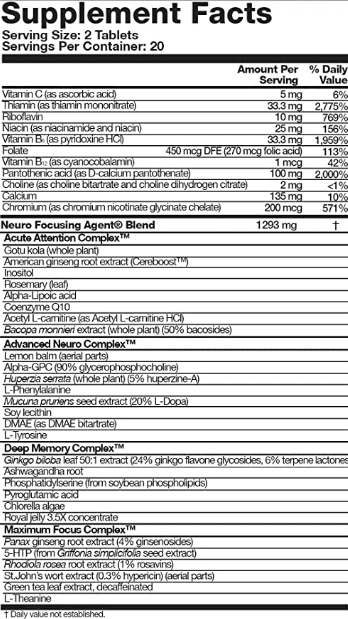 B6, B9, and B12 are very important for preventing cognitive decline and mental impairment, and thiamine is crucial for preventing memory problems. These are just a few examples showing the necessity of B-complex vitamins for brain health. Yet, the latest evidence shows no benefit of B-complex supplementation on cognitive function.

One mineral in Focus Fast is calcium, which is highly involved in nerve conduction and overall neuronal function. Plus, it is involved in excitatory transmissions that play a role in memory. But it isn’t clear if calcium supplementation directly benefits cognitive health.

Chromium is a trace mineral involved in energy metabolism and is important for overall brain health. Some research shows chromium supplementation can improve mood and cognitive function in the elderly.

Alright, now let’s get to the big guns. The rest of the ingredients in Focus Fast are all grouped under the Neuro Focusing Agent Blend, which itself consists of four complexes:

And, of course, these complexes each have their own individual ingredients. So, let’s see everything that’s in Focus Fast.

Gotu kola is an Asian herb known for its cognitive-enhancing properties in traditional uses. It appears to reduce oxidative stress, protect against beta-amyloid plaque formation, and inhibit acetylcholinesterase, all of which can help improve memory and brain function. Some studies show positive results, but the research in humans is mixed as of now.

Cereboost is a form of American ginseng root extract. Studies on this specific form shows it can improve short-term memory, alertness, and attention, while also reducing mental fatigue. This is likely from Cereboost’s actions on the gut microbiota while also increasing acetylcholine levels.

Inositol, also known as vitamin B8, is important for brain phospholipid production and neurotransmitter health. Deficiencies in inositol are associated with memory decline and cognitive impairments.

Rosemary is able to inhibit acetylcholinesterase and thus increase acetylcholine, which is useful for improving focus and memory.

Up next are ALA and CoQ10, which are two very powerful antioxidant compounds that help to rid the body of free radicals. This can reduce oxidative stress on the brain, which improves overall brain health. Plus, these compounds can restore levels of some neurotransmitters, such as acetylcholine, dopamine, and serotonin.

Acetyl L-carnitine is an amino acid ester found naturally in some meat and dairy. It is able to increase acetylcholine production, protect the brain from toxins, stimulate the synthesis of membrane phospholipids, which are important in brain function. Some research shows it can reduce dementia and other neurological disorders, but it’s unclear if it directly improves cognition in healthy people.

The final ingredient in this complex is bacopa monnieri, an Asian herb most known for its bacoside content. It has anti-inflammatory and neuroprotective properties, and some research shows it can reduce the risk of Alzheimer’s, while other studies show some working memory-enhancing effects.

The “neuro” in this name likely refers to the ingredients’ ability to increase various neurotransmitters.

Lemon balm has anti-inflammatory and antioxidant properties, and it can also increase GABA, which helps to reduce anxiety and stress. Plus, some research shows it can improve mood and cognition.

Both Alpha-GPC and Huperzia Serrata increase levels of acetylcholine. They are thought to reduce the risk of Alzheimer’s and dementia, but there is mixed research for cognitive improvement in healthy people.

Phenylalanine is an amino acid that may help to improve attention and cognition in people with low amino acid intake.

Mucuna pruriens (velvet bean) is able to stimulate dopamine while also offering antioxidant and neuroprotective effects, which can improve mood and cognition.

DMAE is a compound that can increase acetylcholine while also offering free radical scavenging effects, therefore protecting against brain damage. And some research shows it has memory-enhancing effects.

Finally, we have tyrosine, an amino acid that is able to stimulate dopamine, serotonin, and norepinephrine. It is particularly beneficial for improving cognitive function in stressful circumstances by restoring these neurotransmitters to healthy levels.

Ginkgo biloba is an Asian herb that is known to offer neuroprotective effects while also inhibiting acetylcholinesterase, which increases acetylcholine availability. The overall research is positive for Ginkgo’s effects on enhancing cognitive function in Alzheimer’s patients, but less so in healthy people.

Ashwagandha is an adaptogenic herb traditionally used primarily in India. It helps to reduce stress on the brain, which in turn leads to benefits. Most of the research shows ashwagandha supplementation can improve cognitive performance, executive function, attention, and memory.

Now, let’s look at phosphatidylserine, which is very important for healthy nerve cell structure and function. Supplementation of phosphatidylserine can improve many aspects of neurotransmission and can support cognitive function, various aspects of memory, focus, attention, and problem-solving, among other things.

Chlorella algae, royal jelly, and pyroglutamic acid can all protect against oxidative stress, neuronal damage, and beta-amyloid buildup, while also increasing acetylcholine levels, thereby improving memory. But most research is done in animals.

Panax ginseng and Rhodiola Rosea are both adaptogenic herbs that have been used for many years in Asia and other areas. Both of these can protect against inflammation and oxidative stress. Plus, they can improve cerebral blood flow and increase acetylcholine levels. Overall, research shows they can improve some aspects of learning, memory, and cognitive function.

5-HTP and St. John’s wort are most known for their ability to reduce depression and anxiety. But other research shows they can increase levels of serotonin in the brain, and they also may help to reduce stress-related cognitive impairment.

Green tea leaf extract and l-theanine offer somewhat similar benefits. Theanine is actually found in green tea, but green tea has other beneficial compounds, such as catechins and gallates.

Overall, both green tea leaf extract and l-theanine appear to improve memory, attention, and focus, while reducing anxiety. This is largely due to the increase in GABA, alpha waves, theta waves, and additional neurotransmitters after taking these compounds.

Focus Fast has a lot of ingredients, but looking at this product as a whole, it’s likely that it should offer some benefits for cognitive function. 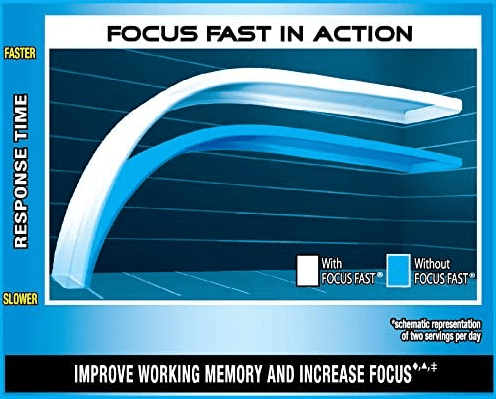 Many of the ingredients in this blend offer similar benefits, such as decreasing oxidative stress and inflammation, offering neuroprotection, increasing levels of neurotransmitters (especially acetylcholine but also dopamine, serotonin, GABA, and norepinephrine), and enhancing overall neuronal health.

The greater attention paid towards acetylcholine-enhancing ingredients makes sense, since this neurotransmitter is most involved in focus and memory.

However, there are some issues.

The first is that many of the ingredients don’t have much specific research in healthy people looking to improve cognitive function. A lot of the research has either been done in people with neurological disorders or in animals. And while these studies did typically show benefits for learning, memory, focus, etc., it can’t always be guaranteed that these results will transfer to healthy people.

Also, most of the ingredients are listed under one giant Blend, which weighs 1,293mg. Unlike more transparent options, such as Hunter Focus, the use of a blend in Focus Fast makes it impossible to tell how much of each ingredient is included. Additionally, since there are so many ingredients in Ficus Fast’s blend, it’s pretty much impossible that they’re at optimal dosages.

Instead of using so many different ingredients, it may have been better to focus on a select few and put in the proper dosage.

This isn’t to say that Focus Fast won’t work; after all, the ingredients are still pretty high quality…but they could’ve done better.

So, in reality, it isn’t guaranteed that you’ll experience increases in focus, working memory, or attention, even though I’d bet most people should see at least some improvement.

Due to the many ingredients that increase acetylcholine (e.g., Cereboost, Ginkgo biloba, Gotu kola, Alpha-GPC), you should see increased focus and maybe improved memory.

Plus, a number of ingredients, such as l-theanine, should help to improve attention.

Not to mention the many ingredients that help reduce oxidative stress and overall stress, while restoring other aspects of brain health (e.g., phosphatidylserine, Rhodiola, ashwagandha, carnitine, ALA). These should indirectly help improve brain function, such as focus, attention, and memory.

Overall, the lack of specific dosages makes it impossible to say how well Focus Fast will work, but it should offer some improvements. And the overall rating on their website is a 3.9 out of 5, with users mentioning things such as less brain fog, increased focus, and more calmness.

Who is Focus Fast Best For?

Focus Fast could be a good supplement for anyone wanting to improve their day-to-day cognitive function, whether that’s at work, school, or around the house. Common symptoms that may be mitigated at least a little by Focus Fast include brain fog, worsened memory, poor focus, decreased alertness, and lack of attention. 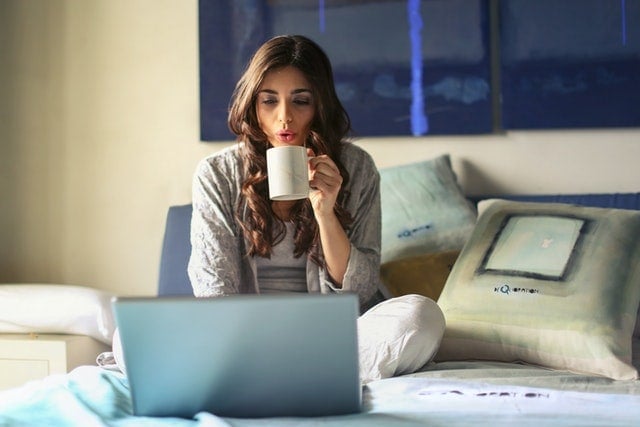 Focus Fast affects many different neurotransmitters and other parts of the brain, so there is a possibility for a few cognitive/mental side effects, as well as other, more general side effects. These include:

Where to Buy Focus Fast

You can buy Focus Fast on the GNC website at this product link.

There are 40 tablets per bottle of Focus Fast, which gives you 10 or 20 servings, depending on if you take 4 or 2 capsules per day, respectively. They recommend taking two capsules twice per day.

Overall, given that they recommend 4 capsules, Focus Fast is a pretty expensive product, especially since the overall ingredient dosage isn’t even very high.

Focus Fast has a lot of solid ingredients, but the main issue is the dosages included. It’s still worth trying out if you want to enhance focus, attention, and memory, but don’t expect anything spectacular.

Isotonix OPC-3 Review – Is This Supplement A Healthy Choice?

YouTonics Collagen Renewal Review – Can It Really Benefit Your Skin?