Cira Pre-Game Pre-Workout Review – Should You Use This Supplement? 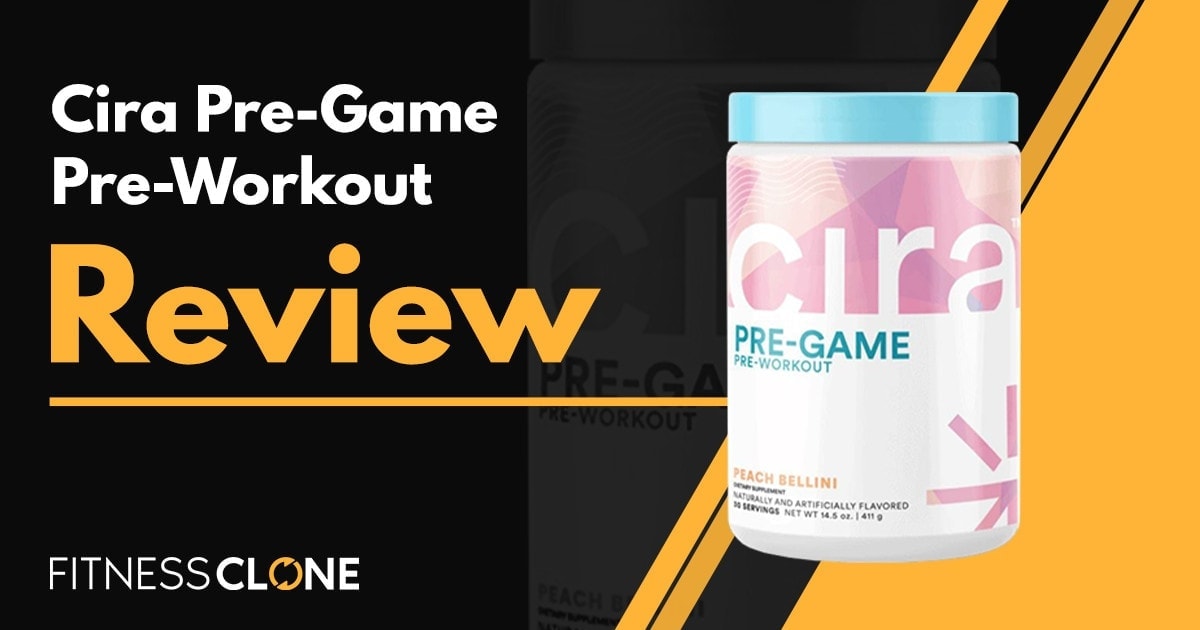 Men and women alike are looking for better performance in the gym and to take their workouts to the next level. But trying to push harder, run faster, and get stronger can often be pretty daunting, especially when you’ve reached a plateau. This is why many are turning to pre-workout supplements to give themselves the boost they need.

Cira Pre-Game is a pre-workout supplement created by Cira Nutrition. And though it doesn’t explicitly say on their site, it seems clear that their products are specifically targeted towards women. Cira Pre-Game Pre-Workout is designed to help you improve your workouts regardless of what type of exercise you do, be it strength training, running, cross-fit, or something else entirely. It is supposed to give you the energy to go “harder, better, faster, stronger.”

Specifically, they claim that Cira Pre-Game Pre-Workout will increase energy, endurance, focus, and strength. Increases in energy are likely to be attributed to the caffeine in the product. And they also include a number of ingredients designed to help you, in fact, go harder, better, faster, and stronger, such as citrulline, beta-alanine, and betaine anhydrous.

(Note: All ingredients are based on the serving size, which is one scoop.)

Notably, they have two flavors, Peach Bellini and Pink Candy, and the former also has two other ingredients: Vitamin A (as Beta Carotene) (1000 mcg RAE) and Sodium (as Sodium Bicarbonate) (82 mg). It’s unclear why Pink Candy doesn’t include those ingredients.

The first ingredient listed on Cira Pre-Game Pre-Workout’s label is L-Citrulline. L-Citrulline, found naturally in watermelon and other foods, is an amino acid that has a number of well-researched benefits on exercise performance. One of the main things it does is increase arginine and nitric oxide levels, which opens up the blood vessels, likely leading to better blood flow and oxygenated blood to the muscles.

The blood-flow-increasing effect of l-citrulline isn’t completely definitive based on research, but regardless, the beneficial effects of l-citrulline on exercise are. In fact, citrulline is one of the best ingredients out there for exercise.

Research shows it can improve exercise performance in aerobic (e.g., running) and anaerobic (lifting) exercise, and it leads to better recovery and slower time to exhaustion. In general, the research shows that 5 to 8 grams is effective, so Cira Pre-Game Pre-Workout is right in this range with 6 grams.

The next ingredient in Cira Pre-Game Pre-Workout is beta-alanine. Beta-alanine is also an amino acid, and it has key roles related to muscular function. Basically, beta-alanine increases carnosine, which is abundant in your muscles. Thus, increasing carnosine will likely increase muscular output, and therefore it will enhance strength, power, and reduce fatigue. Put in another way, beta-alanine helps to bring out the Alpha You.

In particular, supplementing with beta-alanine is likely to lead to increased exercise capacity (i.e., you get more work done) and is especially beneficial for high-intensity exercise (think sprinting, heavy lifting, jumping). Most research shows benefits from 2 to 5 grams, so this product is right below that threshold at 1600 mg.

One other interesting thing to note is that the effects are even greater when paired with sodium bicarbonate. And remember when I said that only the Peach Bellini flavor contains sodium bicarbonate? That means that it is probably the better choice.

Cira Pre-Game Pre-Workout also contains betaine anhydrous. Betaine is a nutrient found naturally in some foods, such as spinach, grains, and beets. It has some pretty interesting roles related to exercise. For example, it helps maintain intracellular fluid levels during exercise, which means you’re more likely to maintain balance of electrolytes and other key substances during exercise. Betaine also has roles related to creatine production and muscle protein synthesis, both of which are related to strength, power, and energy.

It’s no surprise, then, that supplementing with betaine can lead to increased strength and power and even improvements in lean body mass and physique. Most studies use around 2.5 grams per day, so the only concern is that Cira Pre-Game Pre-Workout uses only half of that amount.

Yet another amino acid included in Cira Pre-Game Pre-Workout is L-Tyrosine. L-tyrosine is a precursor to dopamine, and this is important to know for the following reason: during exercise, increased serotonin is a factor in central nervous system (CNS) fatigue, and a high serotonin-to-dopamine ratio results in CNS fatigue. So, by consuming tyrosine, you’ll likely have more dopamine and a lower serotonin-to-dopamine ratio, possibly reducing fatigue.

Even still, there isn’t enough research to say that tyrosine is definitely beneficial for reducing fatigue and improving performance. It for sure won’t hurt, but it might not do much…we just don’t know yet.

What’s a pre-workout without caffeine, right? Cira Pre-Game Pre-Workout contains the specific form of caffeine known as caffeine anhydrous. As a stimulant, caffeine increases sympathetic nervous system activity, which can lead to increased mental and physical energy, increased heart rate, and improved blood flow to the brain and skeletal muscles. Research shows that caffeine consumption can lead to increased strength, power, and both anaerobic and aerobic endurance, though the effects seem to be particularly beneficial for aerobic exercise.

The recommended intake is around 2 mg/kg of body weight, and since Cira Pre-Game Pre-Workout has 200 mg per serving, this may or may not be the right amount for you. If you are sensitive to caffeine and prefer a pre-workout with less or even none of this ingredient, there are a few choices out there. For example, Vega Sport Energizer contains only 100mg of caffeine, and BlackWolf Pre-Workout offers a completely caffeine-free option.

Cira Pre-Game Pre-Workout also contains L-theanine, which is an amino acid found naturally in tea. L-theanine leads to a number of benefits, such as enhanced concentration, focus, and alertness, especially when used at a dose of around 200mg. It is an all-around cognitive booster and provides a great complimentary effect to caffeine simply because it helps to channel and effectively use the rush of energy you get from caffeine. So, if you usually get jitters or other issues with caffeine, pairing it with l-theanine could be very effective. All in all, research shows that l-theanine is a very good cognitive booster.

Finally, the last ergogenic ingredient listed is theobromine. Theobromine is a compound found naturally in chocolate (cocoa). Like caffeine, it is also a CNS stimulant, though its effects are not as intense and take longer to occur. Nonetheless, theobromine improves some aspects of cognitive function and may improve exercise performance, especially in runners. However, there really isn’t much research on theobromine to definitively state its effectiveness for increasing physical and mental performance related to working out.

Cira Pre-Game Pre-Workout is rounded out by an ingredient called AstraGin. Unlike the other ingredients, AstraGin is used not as a performance enhancer but rather to help digest and utilize all of the other ingredients. It contains astralagus root extract and Panax ginseng root extract, both of which are herbs that have been used for many years in complementary and alternative medicine.

After analyzing all of the ingredients, it is likely that Cira Pre-Game Pre-Workout will offer pre-workout benefits. All of the ingredients in Cira Pre-Game Pre-Workout are backed by research. The most well-researched ones include citrulline, beta-alanine, betaine, caffeine, and l-theanine. Ideally, there needs to be more research on theobromine and tyrosine, but the initial results of these are positive enough for me to say that they will likely offer benefits as well.

Another thing to consider is how well these ingredients work together. For example, caffeine, l-theanine, and l-tyrosine all work together to enhance mental and physical performance. And beta-alanine can work well with betaine, citrulline, and caffeine.

However, I do want to note that a review on multi-ingredient pre-workouts showed inconclusive evidence for effectiveness. Despite this, it’s unclear exactly what supplements were reviewed, and Cira Pre-Game Pre-Workout does still appear to be a better pre-workout than most.

The major downfall is the lack of effective doses for beta-alanine, betaine anhydrous, and l-theanine. These doses in Cira Pre-Game Pre-Workout are around only half of what is typically used. This might be offset by having them used together, but it is still likely leaving out a chance to increase its effectiveness.

So, let’s bring back into focus the main claims of Cira Pre-Game Pre-Workout: increased energy, endurance, focus, and strength. Since these claims are pretty general, Cira Pre-Game Pre-Workout can likely stand by these claims. It’s not like they’re saying you’ll increase strength by 200 percent or be able to work out three times as long or something. They simply suggest that you’ll be able to work out more effectively. And this likely will happen based on the solid combination of ingredients.

Caffeine, tyrosine, beta-alanine, betaine, and citrulline all should help to reduce fatigue, increase energy and strength, and help you power through workouts. And theanine will likely provide you with a bit more focus.

However, don’t expect any huge increases in any of these areas. A little bit of a boost? Yes. But not much more than that. So, it is up to you to decide if that little extra boost is worth it.

Who is Cira Pre-Game Pre-Workout Best For?

In line with Cira Nutrition’s marketing scheme, I’m tempted to say that this product is best for women. But in reality, the ingredients in this product make it beneficial for anyone that wants a high-quality pre-workout.

Yet, it actually might be better for women not because of the ingredients themselves but simply because women tend to have a lower body weight and, thus, the dosages of the ingredients might work better for them. But anyone who works out will likely receive benefits, just to varying degrees.

Overall, Cira Pre-Game Pre-Workout is pretty safe, though there are a few things to be noted. The first is the relatively high dose of caffeine, which may lead to insomnia, anxiety, jitteriness, and rapid heart rate, especially in susceptible individuals. Beta-alanine may also cause a tingling sensation, especially in high doses. Also, since betaine can lower blood pressure, and citrulline has a few effects on cardiovascular function, individuals with blood pressure or any other cardiovascular issues should be cautious.

Where to Buy Cira Pre-Game Pre-Workout 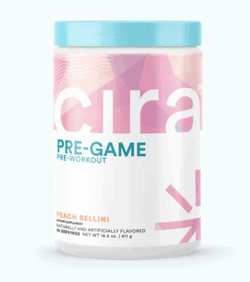 Overall Rating: 4.1 out of 5
Categorized in: Pre-Workout Reviews, Reviews