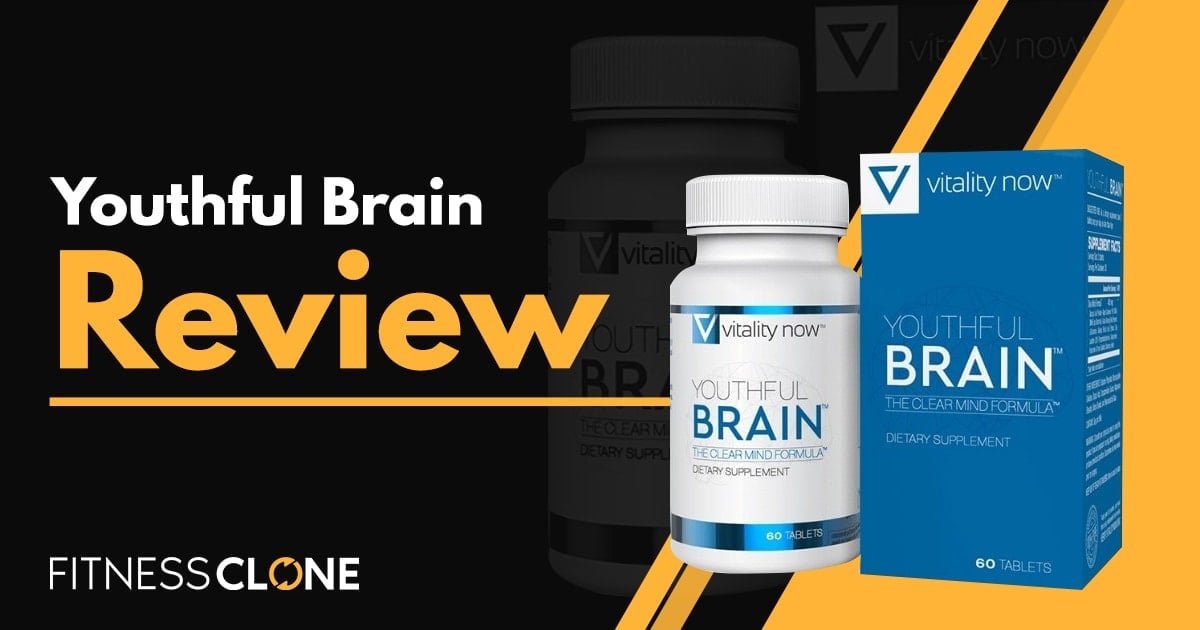 Vitality Now is rather new to the market, currently offering two products — Youthful Brain and Essential Sunshine. Their products are rather expensive compared to competitors and they boast an all-natural formula, but not everyone seems to think highly of the product.

All of Vitality Now’s products are formulated by Dr Sam Walters, a physician who claims to have developed superfood for NASA. Their official website guarantees that a portion of all sales is donated to Wounded Warrior Project, as well as a 60-day empty bottle money-back guarantee to all customers.

Although these guarantees add up, what really matters is whether their products are effective at what they claim to be. Nootropics are meant to improve cognitive function, more specifically your memory, motivation, and creativity. Is that what Vitality Now delivers with Youthful Brain?

What Is Youthful Brain?

What we find with most nootropics is they either fall short of their claim or drop the ball entirely. It’s rare for a nootropic to hit a home run, but it does happen.

Vitality Now’s Youthful Brain claims to give your brain a fresh update, especially with the older crowd. Using the “silver polish on silver” metaphor, Vitality Now states that Youthful Brain will restore your “beat up” brain and get it feeling young again — hence the name.

More specifically, Vitality One claims that users can expect to see enhanced mental clarity, reduced brain fog, and cell health protection with Youthful Brain. This will not only promote short-term results, but long-term as well.

Despite several good reviews online, including their website and Amazon, some people are a little hesitant to trust this supplement due to the chosen ingredients. Let’s take a look at what the commotion is about.

Just because a supplement is formulated by a physician or doctor doesn’t mean it can be trusted. Much like everyone else with something to sell, there will always be the opportunity for shortcuts and error that could affect the quality of their product.

Many experts aren’t too thrilled with the ingredients included in Youthful Brain, largely due to the lack of scientific research behind a lot of those ingredients. This makes it difficult to judge whether or not the supplement is capable of performing as advertised.

Here’s a full list of ingredients, according to the back label:

Below you will find a little more information about each ingredient and why they were chosen for Youthful Brain.

Vitamin B12 (as methylcobalamin)

Vitamin B12 is a key coenzyme involved in several metabolic pathways. Most people are familiar with vitamin B12’s role in energy production. Due to vitamin B12’s function throughout the body, it has been purported that it could help with cognitive function.

While B12 might be a promising nutrient to help stave off cognitive decline as a result of Alzheimer’s Disease or Dementia, the jury is still out. According to a Cochrane analysis, there does not seem to be enough data to support that claim. The group concluded that B12 would most likely only benefit those with a B12 deficiency.

Ginkgo biloba is a very well-known nootropic that can be found in other brain supplements, such as Neuro-Peak. This nootropic contains terpenes that increase your blood’s viscosity and glycosides that dilate your blood vessels. As a result, blood flow to your blood flow is improved.

Gingko Biloba extracts from the dried green leaves of a gingko tree. There are a variety of active compounds found in the leaves that are responsible for its ayurvedic effects. Flavone glycosides and terpene lactones appear to have the most prominent effects. The fact Youthful Brain utilizes a standardized gingko extract is fantastic. Unfortunately, the lack of dose transparency makes it difficult to assess its efficacy. Some evidence shows that 240mg of Gingko Biloba extracts can improve memory and cognition in Alzheimer’s Disease patients.

Bacopa monnieri is perhaps the most popular nootropic on the market and can be found in many products, like Force Factor Forebrain and Neuriva, and is a reliable memory enhancer, especially in older adults. Almost every brain supplement takes advantage of this ingredient and is almost required in modern brain enhancers.

Bacopa is a traditional ayurvedic herb that has been used for centuries. There have been reports that bacopa extracts can help with Parkinson’s Disease, Dementia, and Epilepsy. The reason bacopa has been implicated in these brain conditions is due to its effects on acetylcholine esterase. It has been shown that bacopa extracts inhibit acetylcholine esterase. As a result brain signaling and cognition may improve.

Unlike the previous two ingredients, algae complex isn’t very common among nootropics, but it does contain DHA — which is found in numerous brain supplements. Most brands tend to isolate the DHA, but Youthful Brain instead uses the whole complex.

Since it is not known what constitutes the other 81% of the complex, but DHA is known to aid in mental health and depression. Scientific research has brought mixed results.

Vinpocetine has long been viewed as an effective nootropic, being used in brain supplements for years. Many researchers like this nootropic because it brings three major benefits: promotes healthy blood flow, acts as a powerful anti-inflammatory, and as an anti-oxidant.

It is recommended to consume a minimum of 10mg of vinpocetine daily.

Youthful Brain does the same thing with soy lecithin that it does with the algae complex. What the ingredient contains is important, but it is much more effective to extract it from the whole ingredient.

I normally tend to avoid nootropics that contain L-Glutamine, especially those that come in large amounts. This ingredient is known to convert into Glutamic Acid in the brain, which is necessary for cerebral functions. It can also increase the amount of Gamma-aminobutyric acid, necessary for mental activity and brain function.

We consume this ingredient in large amounts with our average diet (pasta, meat, fish, etc.), therefore it is pointless to include in a nootropic.

Huperzine is a compound found in Chinese club moss, Huperzia serrata. Huperzine a exerts its effects on an enzyme found primarily in the brain called acetylcholine esterase. This enzyme is responsible for breaking down the neurotransmitter acetylcholine.

Acetylcholine is the primary neurotransmitter in the brain. It is responsible for transmitting signals across over 100 trillion synapses. It is believed that by inhibiting the activity of acetylcholine esterase the brain can send and receive signals more efficiently which results in improved cognition.

The recommended dose for huperzine a ranges from 100-400mg taken twice daily. Again, Youthful Brain does not disclose huperzine a’s exact dose in their proprietary formula.

Asian ginseng root powder claims to be a powerful nootropic that aids in memory, protecting against neurological disease, overall mood, and even acts as an anti-inflammatory. Unfortunately, a lack of scientific proof behind the ingredient makes it unreliable.

Despite that, the ingredient is found in a variety of different supplements and has been used for general health over the past several hundred years. Not the best choice for this supplement.

Another ingredient that doesn’t really add any value to Youthful Brain, DMAE claims to be cholinergic. Other claims state that it increases your body’s production of acetylcholine, but a lack of research doesn’t help.

One study found that taking 1,500mg over 24 weeks showed no mental or brain benefits, making this a questionable ingredient choice by Vitality Now.

Vitality Now went with a simple, yet sleek design for their Youthful Brain supplement. Utilizing blue and black colours, the packaging doesn’t make use of any marketing pitches or claims. The capsules come in your typical over-the-counter pill bottle.

Each bottle contains 60 tablets, which are intended to be taken two-per-day. If purchased on the Vitality Now official website, the bottle will run you a total of $65 (plus shipping) and notes a savings of $75 off the original $135 list price. There’s also an option to subscribe and get 20% off all future bottles.

There’s no doubting that Vitality Now makes use of some powerful and well-known nootropics, but many experts and professionals still have a growing concern over Youthful Brain.

As a result, we are unsure of how effective this product is for your brain health. I will note, most companies do this as a way of hiding something, but that could be viewed as an assumption.

To ensure you receive the most value when shopping for a nootropic that delivers results, it’s important to know your options. Vitality Now may seem like a great choice due to the many different ingredients, but a deeper look in the market can better satisfy your needs.

Below I will explore a cheaper option, as well as an option similar in price to Youthful Brain. Both options I feel are more superior than Vitality Now’s product.

This nootropic makes use of several powerful ingredients, such as L-tyrosine, N-Acetyl L-Carnitine, Bacopa Monnieri, Ginkgo Biloba, Phosphatidylserine, and Panax Ginseng. You’ll receive a month’s supply for $45, making it a bit cheaper than Youthful Brain.

It is important to note that Provasil also contains several ingredients with insufficient evidence supporting brain function. With that being said, I have an even better option if you’re okay with the price of Youthful Brain.

Mind Lab Pro is one of my all-time favorite nootropics on the market, delivering all the best ingredients and no fillers! It includes both bacopa monnieri and extracted phosphatidylserine, but also includes other powerful nootropics:

Even more surprising, Mind Lab Pro will cost the same amount as Youthful Brain, meaning the investment is a no-brainer.

Vitality Now claims to improve your mental clarity, reduce “brain farts,” and protect brain cell health. Many products can be debunked by browsing their list of ingredients.

There are certainly some ingredients included that have powerful cognitive effects. Unfortunately, the proprietary blend scares me enough to say this supplement is highly unlikely to support a noticeable improvement in cognitive function.

There are several useless ingredients in Youthful Brain, including L-Glutamine, DMAE, and Asian ginseng root powder. In addition, not knowing the amount of Huperzine A can lead to multiple side effects — including headache, confusion, cramps, low motivation, and mood changes.

The overall 400mg proprietary blend is not nearly enough to cover all of the ingredients. With L-Glutamine likely being used as a filler, this supplement will prove to be very weak for users.

There are some really, really great nootropics on the market today. Mind Lab Pro is one of the best in my opinion and as long as they’re delivering a quality supplement, ones like Youthful Brain will continue to fall short.

The last thing you want to see in a supplement is useless ingredients. After all, that means money wasted. Not being able to judge the amount of each ingredient just adds to the frustration. To top it off, the concern over too much Huperzine A can actually have a negative effect on your body — the opposite of what we’re looking for.

I would highly recommend avoiding Vitality Now’s Youthful Brain in favour of some more reliable and effective supplements.

Nitro-Tech Elite Protein Review – Can It Give Your Muscles Fuel?

Animal Cuts Review – Will This Weight Cutting Supplement Work For You?

NO2 Black Review – Can This MRI Performance Supplement Help You Build Muscle?

Organifi Green Juice Review – How Does It Rank?