Chemix Pre-Workout Review – How Does It Compare?

There are boatloads of pre-workouts out there claiming to give you massive pumps, endless energy, and herculean strength, but a lot of these products simply aren’t backed by evidence. And as a gym-goer, weightlifter, or bodybuilder, I’m sure you want to be confident that what you’re spending your hard-earned money on will actually work.

So let’s take a closer look at one option in the world of pre-workout supplements, Chemix Pre-Workout. This pre-workout powder is designed to provide you with the energy you need for the most intense workouts. In this Chemix Pre-Workout review, we’ll find out if this powder measures up to its claims or falls flat. So, without further ado, let’s dive in and see what this pre-workout powder can offer for your next gym excursion!

Chemix Pre-Workout (also called Chemic Pre-Workout V2) was created by supplement company, Chemix. While Chemix has only existed for around two years, they have produced a variety of supplements in addition to their Pre-Workout, including Chemix Natabolic Testosterone Booster, Chemix King Of Pumps, and Chemix Cortibloc.

Even being relatively new to the game, Chemix has already unleashed this newer pre-workout in response to feedback from their original pre-workout (V2 refers to the second version). All in all, Chemix Pre-Workout V2 is supposed to be a very solid all-around pre-workout for anyone engaged in intense physical training. With a wide range of research-backed ingredients, this product is supposed to ramp you up like no other product has done before.

Chemix claims that if you take Chemix Pre-Workout, you’ll experience a number of benefits, such as massive pumps, explosive energy and focus, enhanced strength and muscle, better recovery, and more endurance/less fatigue.

These benefits can be attributed to the wide range of ingredients in the product that they say are scientifically proven to do all of these things.

Through the use of specific ingredients that enhance blood flow, you’re supposed to experience massive pumps.

Due to its stimulating nature, along with the increased production of neurotransmitters, this product is also supposed to give you a lot of focus, concentration, and all-around energy. Feelings of euphoria may potentially happen, they claim.

With ingredients designed to ramp up the central nervous system (CNS), you are to expect better muscular activation and overall increased strength, which should lead to more muscle.

Key ingredients in Chemix Pre-Workout are supposed to help you go harder, for longer. You can expect to complete more sets and reps and power through even the toughest of workouts.

With this wide range of claimed benefits, you might want to get your hands on Chemix Pre-Workout already. But hold on, chap! We have to analyze the ingredients first to see if this product will actually do what it claims to.

(Note: The amounts listed are based on the serving size of 1 scoop)

See what I mean by some unique ingredients? Let’s check them all out to see how effective (or not) they are.

Up first is the oft-used Citrulline, and for good reason. Citrulline, a non-essential amino acid, is known to increase L-Arginine and nitric oxide levels. In turn, this opens up the blood vessels and leads to increased blood flow to the muscles and other areas, possibly leading to the coveted pump feeling. Citrulline is also known to enhance exercise performance and recovery in both anaerobic and aerobic exercise. The most effective dose for Citrulline appears to be near 6g.

Another common and effective ingredient used in this product is betaine anhydrous. Betaine is a naturally occurring amino acid found in a few foods. One benefit it has is that, since it is an osmolyte, it helps the cells retain water, and this may make it easier for muscular contraction and muscle protein synthesis to occur. Betaine also plays a role in creatine synthesis and muscle protein synthesis, which may lead to increased strength and muscle mass.

Finally, betaine increases lipolysis (breakdown of fats), and this, combined with its beneficial effects on muscle gain, may make it particularly beneficial for people looking to enhance body composition. The effects of betaine on strength and power are also evident, too, just not as much as those for body composition. A beneficial dose is around 2.5g.

Up next is the trademarked ingredient Glycersize. Glycersize is a form of glycerol powder. Glycerol is a naturally occurring metabolite and also an osmolyte similar to betaine, though more powerful. Also, it can be used to produce glucose, which is very important for energy levels. Also, when glycerol is combined with sufficient water intake, it leads to a hyper-hydrated state in the body since it is very good at keeping water within the cells. So, the combination of increased energy availability and increased fluid retention makes it beneficial for anyone who partakes in long, intense exercise. Research shows that glycerol supplementation is primarily beneficial for endurance exercise, but it also has positive effects on anaerobic performance too.

The fourth ingredient in Chemix Pre-Workout is lion’s mane extract. Lion’s mane is actually a mushroom that has a number of health benefits: it acts as an anti-inflammatory, antioxidant, and immunostimulant. Various compounds in lion’s mane are also known to reduce fatigue, improve mood, and benefit other aspects of cognition and overall mental health. So, it’s no wonder Lion’s Mane supplements, like Life Cykel Lion’s Mane, are becoming more and more popular. And, while Chemix Pre-Workout may not be a dedicated Lion’s Mane supplement, by including this ingredient within its formula it may help with better focus, less fatigue, and more energy when working out.

Chemix Pre-Workout also contains the amino acid L-tyrosine. Tyrosine is a precursor to dopamine and norepinephrine, and since these neurotransmitters are involved in mood, stress, and overall cognition, the logic is that increased tyrosine will lead to better mood, reduced, stress, and higher cognitive functioning overall. And all of this appears to be true, particularly for people who are at risk of neurotransmitter depletion from stressful tasks. The exercise benefits of tyrosine are limited, but there are definitely cognitive benefits, so this might translate to better exercise depending on the situation. Doses can range from 100mg to 400mg or more.

The sixth ingredient in this product is dimethylethanolamine (DMEA or DMAE). DMEA is necessary for the production of choline, which is in turn important for the production of the neurotransmitter acetylcholine. And since acetylcholine is involved in many cognitive functions, particularly focus, the logic is that DMEA might enhance focus and cognitive function when working out. However, no specific research shows DMEA will enhance exercise performance.

The final ingredient in Chemix Pre-Workout is the creatively-named Exothermic Energy Amalgam. The name sounds pretty enticing, and it contains a wide range of ingredients, some of which might be just a little hard to pronounce. This amalgam contains caffeine anhydrous, N, N-dimethylethylamine, caffeine citrate, higenanamine HCl, N-isopropylnorsynepherine, theophylline anhydrous, and alpha yohimbine.

The main purpose of this blend is to increase overall energy, which makes sense since all of these ingredients are stimulatory in nature. Caffeine is the most well-known ingredient here, and it is proven to increase muscular strength and endurance, power, and aerobic endurance.

Also, some of these ingredients in this blend act as beta-adrenergic agonists, and they can increase the release of adrenaline, potentially leading to more energy and maybe even more fat loss. As beta-adrenergic agonists, they also cause widening of the airways and lead to easier breathing and enhanced oxygen, which is why they may be particularly useful for endurance exercise.

Finally, all stimulants have the potential to increase dopamine, norepinephrine, and serotonin, which may lead to improvements in mood, focus, and well-being.

However, it should be noted that a few of these ingredients are actually banned in multiple competitive sports regulations (higenamine, so caution is advised.

Chemix has a pretty solid product here, and it is likely that Chemix Pre-Workout will be a good pre-workout. Many of the ingredients here are backed by research, and the dosages included are also pretty close to the effective doses used in studies. Chemix Pre-Workout contains some of the most classic and well-studied ingredients (e.g., Citrulline, betaine), yet also a number of unique ones that should work well too (e.g., higenamine, N-isopropylnorsynepherine).

In fact, some of these ingredients work so well that they are banned in some competitive sports organizations, leagues, etc. So, depending on your situation, this may or may not be something to consider.

Chemix Pre-Workout is supposed to give you massive pumps, increase energy and focus, enhance strength and muscle, and give you longer endurance and less fatigue. And based on the ingredients, these should occur at least at some level. The pumps will likely happen due to Citrulline. Betaine and Glycersize may also have a role in muscular pumps, and they also help with strength, power, energy, and fighting fatigue.

Next, lion’s mane, tyrosine, and DMEA will likely improve neurotransmitter levels and various aspects of cognition, such as focus and mood. Finally, the Exothermic Energy Amalgam, due to its combination of high-potency stimulants, will likely lead to more energy, endurance, and less fatigue as well. This is probably even more likely if you take two scoops instead of one, which is listed as an option on the supplement.

Who is Chemix Pre-Workout Best for?

Chemix Pre-Workout is best for recreational lifters/athletes who aren’t involved in any professional or otherwise regulated competitions/leagues. This product should work well for the recreational lifter/exerciser looking to improve all aspects of their workouts and get better results, especially those who are okay with and even enjoy taking stimulants on a regular basis. If you like that wired-up feeling, this is for you.

There are a few side effects to be aware of with Chemix Pre-Workout, especially in regard to the Exothermic Energy Amalgam.

The concerns with the safety of the ingredients really take a hit on the overall value of this product, but then, not everyone will experience side effects.

Where to Buy Chemix Pre-Workout

Chemix Pre-Workout is available for purchase from the official Chemix website here. 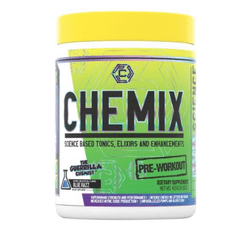 Each container of Chemix Pre-Workout includes 40, one-scoop servings for a cost of $49.99. So, if you take one scoop each time, you’ll pay a little more than a dollar per serving.

WODPAK Review – Is This NF Sports Multivitamin Worth Buying?

Sworkit Review – Is This Fitness App Right For You?

Resurge Review – Will This Supplement Help You Burn Fat While You Sleep?

Zuzili Elderberry Gummies Review – Are These Gummies Worth Buying?

Stacker 2 Review – Should You Add This Fat Burner To Your Routine?

Ka’Chava Review – Is This Meal Replacement Shake Worth Using?