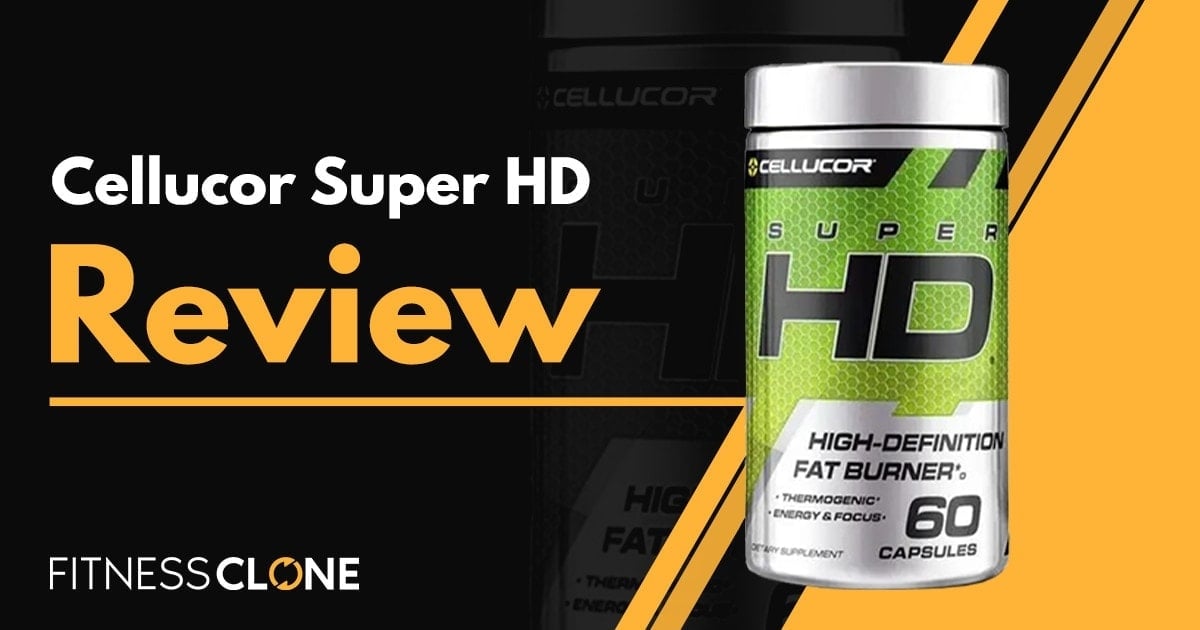 In today’s day, many people are struggling with weight gain, and there’s just no question about it. And with many people becoming overweight and obese, more and more people are looking for better ways to lose those extra pounds.

One of the first things that many look for is supplements since these often appear as a quick and easy fix. However, many fat-burners don’t yield true results and can be a waste of money. Yet, there are some solid ones out there that can complement an otherwise healthy lifestyle and augment the usual fat-loss regimen. So let’s take a look at one of these fat burners that claims it can help you shed those pesky pounds, Cellucor Super HD. In this Cellucor Super HD review, we’ll dive into this fat burner‘s ingredients, claims, benefits, and more to help you decide if it’s a winning choice.

No, we’re not talking about television! Cellucor Super HD, a product made by Cellucor, is a fat-burning supplement. Where does the HD part come in? HD refers to the “high definition” body that you’re supposed to get from supplementing with Cellucor Super HD.

The makers of Cellucor Super HD wanted to create a supplement that not only helps you look your best, but also feel your best too. Cellucor Super HD comes with the backing of 20 years of nutrition expertise from Cellucor, and it is supposed to be their best product yet.

Cellucor Super HD contains a Thermogenic and Sensory blend, which is featured by cayenne pepper, among other roots and herbal extracts, designed to ramp up metabolism and help you to lose weight. This is also paired with Green Select Green Tea Phytosome, a green tea extract that they say has been studied to aid in fat loss.

In addition to fat loss, they claim you will experience much higher energy levels due to their inclusion of caffeine anhydrous, possibly leading to more energy for fat-burning workouts.

Regarding the “sensory” aspect of the Thermogenic and Sensory blend, Cellucor Super HD contains ingredients such as amla fruit extract and toothed clubmoss that they claim will support mental energy, memory, and concentration.

Finally, Cellucor Super HD is supposed to help you shed excess water weight, leading to a more cut and toned physique, in part due to dandelion root.

So, Cellucor Super HD claims to be essentially a 4-in-1 fat-burner, not only aiding in fat loss and physical health but also your mental performance and energy too. The question then becomes, is Cellucor Super HD legit or simply a shelf-sitter? If you want to know the answer, read on to find out!

Cellucor Super HD has only three ingredients, though the first is a blend that contains many individual ingredients. But the three major ones are the following:

(Note: All dosages are based on the one-capsule serving size.)

The first ingredient, called the Cellucor Super HD Thermogenic and Sensory Blend, is obviously the largest. All in all, this blend is 193mg per serving and contains the amino-acid l-tyrosine, as well as extracts from amla fruit, dandelion root, yohimbe bark, cayenne fruit, toothed clubmoss aerial parts, and rauwolfia root.

Sounds like some of these ingredients came from a fantasy book (toothed clubmoss…Yohimbe), but these are all, in fact, real.

Now, more importantly, let’s see if they are effective.

In regard to the thermogenic aspects of this blend, there are a few ingredients which are known to be stimulants, which means they increase the sympathetic nervous system. These include tyrosine, cayenne, and Yohimbe. Tyrosine and Yohimbe are overall stimulants, while cayenne is particularly a stimulant of the cardiovascular system and digestive system.

Not only can these stimulants increase energy expenditure, but they also may reduce appetite and increase fat and carbohydrate metabolism, which could play a role in helping you to lose weight. Compounds in cayenne pepper, such as capsinoids, may also help to increase weight loss and promote the breakdown of fats, but more research is needed.

Dandelion root is also included, likely because it is a diuretic, which can help you to shed excess water weight. However, there’s no good evidence showing it will lead to fat loss.

Next, there are a few ingredients involved in the “sensory” or cognitive aspect of this blend. Amla is a fruit that is known to be anti-inflammatory, and some research shows that it also may improve memory and overall neurological health. Toothed clubmoss may also offer neurological benefits and fight against inflammation, and some evidence shows that a compound called Huperzine A can enhance memory and other aspects of cognitive health. However, that compound is usually studied in Alzheimer’s patients and not the general population or those who work out. In sum, there isn’t much weight behind the memory or focus-enhancing aspects of this blend specifically as they relate to the general population.

Overall, this blend is likely to give you some mild benefits for weight loss and concentration, but nothing spectacular. Also, the biggest downside with a blend is that it is unknown exactly how much of each ingredient is in there, so it’s impossible to gauge the overall effectiveness. Other fat burners, such as Hunter Burn and Instant Knockout, don’t feature any blends making their formulas more transparent.

Cellucor Super HD also contains 160mg of caffeine anhydrous per serving. Caffeine is another stimulant, so it will likely lead to even higher energy expenditure and appetite suppression when combined with the other ingredients. Research shows it leads to increased metabolic rate shortly after consumption, but it is unclear if it leads to long-term benefits for weight and fat loss.

There is also research on the specific form of this green tea extract, Green Select Green Tea Phytosome (say that five times fast!). The main findings are that, compared to diet and/or lifestyle interventions alone for weight loss, additional supplementation with 150mg of Green Select Green Tea Phytosome leads to greater weight loss and fat loss, along with greater reductions in waist circumference. So, it isn’t a cure on its own, but it is rather beneficial when paired alongside existing fat-loss efforts.

Based on the evidence so far, Cellucor Super HD will probably work, but with a caveat; It is unlikely to do anything special on its own, and the benefits only appear when you actually pair it with caloric reduction, exercise, and other lifestyle protocols for weight loss. So for any of you who thought you could just take it, do nothing, and let it work its magic, I’m sorry to burst your bubble!

The inclusion of Green Select Green Tea Phytosome is likely the best part of this product since it is well-researched, and they use the exact dose of 150mg used in research.

There is also a decent amount of research showing that cayenne, tyrosine, Yohimbe, and caffeine increase energy expenditure and overall provide a thermogenic effect.

Now, what about when these are taken together? While there’s no information on Cellucor Super HD specifically, there is research showing that a combination of tyrosine, capsaicin, catechins, and caffeine leads to a greater thermogenic effect and increased fat loss, though the effect is modest (around 2 pounds more fat loss compared to placebo).

So, there is a chance it will work, but this blend will likely offer modest benefits at best. This is compounded by the fact that they don’t list the dosages of each of the ingredients in the blend, so it is unclear if those doses line up with the amount needed to actually achieve a fat-loss effect.

Lastly, the least intriguing aspect of Cellucor Super HD is the sensory or cognitive components. Yes, there might be increases in memory or concentration due to tyrosine, amla, and Huperzine A in toothed clubmoss, but these are only somewhat likely to occur based on the lack of research. Since this is primarily a fat-loss supplement anyway, these really seem to be just a filler rather than complementary ingredients.

So, how does Cellucor Super HD live up to its claims? Overall, their claims are somewhat truthful. You will likely get an energy boost from caffeine, but don’t expect “explosive energy,” as they detail it. Next, based on their inclusion of some of the best thermogenic supplements on the market, you can expect increased metabolism, energy expenditure, and thus fat loss. However, remember that these benefits really only occur when paired with traditional fat-loss efforts, and even then, it’s not like you’re going to lose 15 to 20 pounds more compared to those groups. You will likely experience more fat loss compared to not taking it, but probably in the range of 2 to 5 more pounds over a few weeks. Nothing in the world can make you lose fat if you still eat unhealthily and don’t exercise.

Who is Cellucor Super HD Best for?

As I’ve indirectly stated throughout this article, this product is particularly beneficial for individuals who are already trying to lose weight by working out and dieting. The ingredients work somewhat well on their own, but thermogenic ingredients always work better when paired with exercise and caloric restriction. Basically, the more tools in the toolbox you use, the better. So, yes, you can still take it, sit on the couch, and hope for some results, but I caution you in expecting anything miraculous from that approach.

There are actually a number of side effects to watch out for in all thermogenic products, and Cellucor Super HD is no exception.

First, any stimulant can cause anxiety, insomnia, jitteriness, agitation, and other related symptoms, so caffeine, green tea extract, tyrosine, and Yohimbe all could potentially lead to these reactions, especially in susceptible individuals. Cayenne is less likely to do so, and may just lead to gastrointestinal issues, such as heartburn. Of these, Yohimbe is the most concerning as it has been linked to some severe effects, including rapid and irregular heartbeat, kidney failure, and seizures.

Moving on, toothed clubmoss also may lead to dizziness, nausea, and sweating, but these aren’t very common.

Lastly, rauwolfia is somewhat concerning given its potential for rather serious side effects, such as slow or irregular heartbeat, changes in blood pressure, seizures, heart attacks, and depression.

Based on the potential for side effects, there are a variety of individuals who should be particularly cautious about supplementing, especially people with anxiety, neuropsychiatric problems, cardiovascular disorders, and blood pressure disorders, among others. If you want to look further into the safety aspects, they do list a “Product Warning” on the supplement page.

Where to Buy Cellucor Super HD

Cellucor Super HD can be purchased from the official Cellucor website here.

A one-time purchase of Cellucor Super HD will cost $29.99 per bottle. With 60-capsules per bottle, you’re paying about $0.50 per serving; obviously fairly inexpensive. 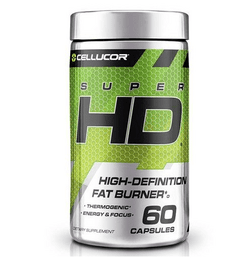 Cellucor recommends taking 1 capsule in the morning and 1 capsule at night, so with 60-capsules in each container, Cellucor Super HD should last you 30 days.

MRI Black Powder Review – Can This Pre-Workout Boost Your Energy

4 Gauge Review – How Does This Pre-Workout Supplement Rank?

CrazyMass Review – How Do These Steroid Alternatives Perform?

LiverPure XTS Review – Can It Provide The Cleansing Benefits You Want?