Weider Prime Review – How Does This Supplement Measure Up? 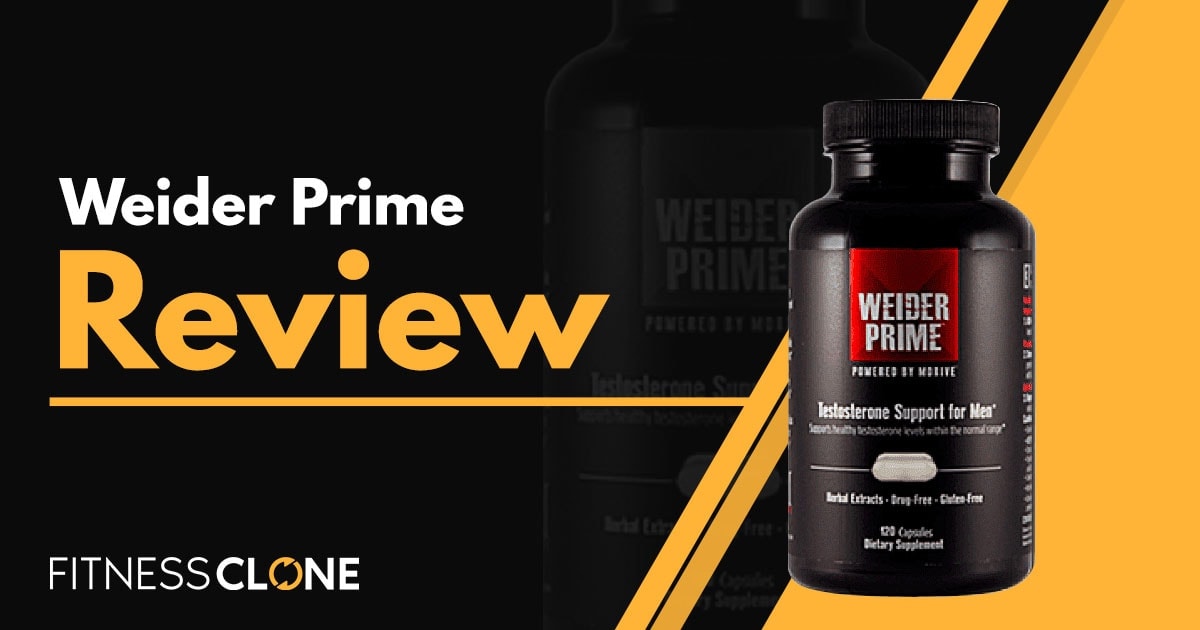 If you’re a man who’s getting older in age, there’s a good chance that you’ve at least looked into testosterone supplements before. But, with all of the testosterone-boosting supplements out there, it can be a bit overwhelming when trying to find just the right one. There are a ton of options and, like most supplements, some are great where others fall flat.

It’s important to analyze which ones are actually effective, and we’re here to help. So, let’s take a look at a popular testosterone supplement, Weider Prime. In this Weider Prime review, we’ll discuss this supplement’s ingredients, benefits, claims, and more so you can find out if it’s really worth the purchase. Let the judgment begin!

Weider Prime is a supplement designed to enhance testosterone and overall performance in men. When looking at their website, it’s pretty clear that it is specifically tailored for older men, which makes sense since they are more likely to have lower testosterone. Weider Prime cites some of the main clinically tested ingredients, such as KSM-66 Ashwagandha, L-OptiZinc, and Chromax, as the main players in this formula.

Clinically-tested KSM-66 Ashwagandha, along with some herbs, vitamins, and minerals (e.g., L-OptiZinc), are supposed to help return your low testosterone levels back to healthy levels. Or, if you’re already at a healthy level, Weider Prime may increase this even further.

Weider Prime also claims to help you shred off fat and gain muscle, thereby improving body composition. One of the main ingredients they claim will do this is Chromax.

With ingredients such as B-complex vitamins, Weider Prime is also designed to increase your energy and focus, both from a physical and mental standpoint. Specifically, the makers of Weider Prime claim it will give you enhanced aerobic endurance capacity.

Another benefit related to workouts/performance is increased strength. Not only that, Weider Prime is also supposed to increase your recovery capabilities. So, you will supposedly be able to work out harder and recover more effectively from those intense workouts.

Finally, Weider Prime is supposed to reduce stress and help men achieve healthy cortisol levels. Again, they cite KSM-66 Ashwagandha along with some other herbs, vitamins, and minerals.

Overall, you can see a host of claimed benefits from Weider Prime. But how effective is Weider Prime when its ingredients are put under the spotlight? Read on to find out!

Weider Prime contains a combination of a variety of ingredients, some of which are clinically-tested, trademarked forms. Here is the rundown of what’s in Weider Prime:

(Note: Amounts are based on the serving size of 2 capsules.)

The first ingredient listed in Weider Prime is vitamin D3. Vitamin D3 is actually more like a hormone, and it is involved in various aspects of testosterone production, sperm production, and overall male reproductive health. And while you may not get as many IU’s as you would in a straight vitamin D3 supplement (most contain around 5,000 IU), the 400 IU amount in Weider Prime is still a solid level. Also, research shows a positive correlation between vitamin D levels and testosterone levels, but vitamin D supplementation doesn’t appear to affect testosterone levels significantly.

Weider Prime also included two B-complex vitamins, vitamin B6 and vitamin B12. These vitamins are needed for optimal energy levels since they help turn the food you eat into energy. Also, intense exercise likely increases the need for B-vitamins, so they could possibly be beneficial when exercising.

On top of that, these vitamins play a crucial role in brain and nervous system health, and supplementing at high doses of B6, B12, and other B-vitamins likely enhances brain health. As for testosterone, B-vitamin supplementation is unlikely to add any major benefit.

One mineral that Weider Prime includes is calcium. Calcium is lost during exercise, and supplementation may be an efficient way to replace some of that loss. It is also needed for the functioning of various hormones and for overall muscular functioning and exercise performance. However, calcium supplementation likely won’t add anything significant to your workouts or testosterone levels.

Another mineral included in Weider Prime is zinc in the specific trademarked form, L-OptiZinc. Zinc will likely have much more of a benefit than calcium. Zinc has a critical role in the regulation of male reproductive functions. It is highly concentrated in the testes and important for overall testicular function and the production of testosterone as well as other androgenic hormones. It also helps convert testosterone to dihydrotestosterone.

And research shows that deficiencies are associated with hypogonadism (low T). Supplementation with zinc can be beneficial for those who are deficient, especially if you’re someone who exercises intensely. And the specific form of zinc included here, L-OptiZinc, is proven to be more absorbable and thus, more effective. Beneficial doses are around 15 to 30mg daily, sometimes even more.

Up next is Chromax, which is a specific form of chromium picolinate. Chromium is a trace mineral involved in various aspects of metabolism, and it also helps to improve the function of insulin and increase muscle protein synthesis. Research on Chromax specifically shows that it can help people lose fat and maintain lean body mass during weight loss, thereby improving body composition. The effective dose of Chromax is 200 to 400mg per day.

Weider Prime also contains an ingredient called diindolylmethane (DIM). DIM mainly appears to affect estrogen metabolism, in which it can increase “good” estrogens and decrease “bad estrogens.” There really isn’t any definitive research showing it can improve free or total testosterone levels, however.

Perhaps the most powerful ingredient in Weider Prime is KSM-66, which is a specific form of ashwagandha extract. Ashwagandha is a very powerful and healing herb that has been used for thousands of years in Ayurvedic medicine and now all across the world. It mainly acts as an adaptogen, which means it can control stress via action on the HPA-axis. Research shows that the most beneficial effects of ashwagandha are stress and anxiety reduction, including reductions in cortisol. And lower stress/cortisol should lead to greater testosterone since cortisol can inhibit testosterone.

Indeed, ashwagandha is known to increase free and total testosterone, and it also promotes better physical performance, including increased strength and endurance, and less fatigue. Overall, it is a very effective ingredient, and the KSM-66 form is the most well-researched form. A typical dose for men is 300 to 600mg, the latter being more effective. So, where other testosterone boosters include a smaller dosage, such as Prime Male at 300mg or Nugenix Maxx with 600mg, Weider Prime aims to pack a punch with this ingredient by including 675mg.

Next up is cordyceps, which is a mushroom that, like ashwagandha, has been used for thousands of years, typically in Asian medicine. Cordyceps has a number of benefits, such as decreasing inflammation and improving blood sugar and cholesterol levels, all of which could promote enhanced body composition. It has also been used for male infertility, and some research shows that it can improve sperm health and increase sexual desire.

The last ingredient in Weider Prime is BioPerine, which is a trademarked form of piperine, a compound found in black pepper. BioPerine is used in many supplements to enhance the absorption of vitamins, minerals, and other ingredients. In fact, many of the ingredients in Weider Prime are proven to be absorbed better when co-administered with BioPerine, such as zinc, calcium, vitamin B6, vitamin B12, and ashwagandha. Therefore, BioPerine plays a key role in this product.

Weider Prime is a pretty solid product and is likely to work as a testosterone booster and overall male health promoter. It includes a good group of ingredients proven to increase testosterone, energy, and performance, among other things, mainly KSM-66 Ashwagandha, L-OptiZinc, and probably cordyceps. And Chromax is another high-quality, well-researched ingredient that should promote fat loss. And all of these ingredients are dosed based on the clinically researched effective dose, so this is a big plus.

However, there are a few subpar ingredients too, especially calcium, but also vitamin D3, DIM, and vitamins B6 and B12. The last four might do something, but I wouldn’t expect a lot from them. And I wouldn’t expect anything really from the measly amount of calcium included.

With some key, high-quality ingredients, most of these claims can be stood by. You’ll likely get a boost in testosterone from KSM-66 Ashwagandha, L-OptiZinc, and cordyceps. KSM-66 should also help with increased energy and focus as well as various aspects of exercise performance. Vitamin B6 and vitamin B12 may also help with energy, focus, and exercise performance, but it may not be too noticeable.

Chromax is primarily included as a body composition supplement, and it will likely do just that. You should notice at least slight reductions in body fat and an overall improved body composition.

Finally, KSM-66 comes in once again with its ability to lower stress and establish healthier cortisol levels. This is the best ingredient in Weider Prime.

Who is Weider Prime Best For?

With its multi-faceted and specific list of benefits, Weider Prime is best for middle-aged to older men who simply want to look, feel, and perform better. Take a look at the benefits that you may get again: More testosterone, improved body composition, better energy and focus, enhanced exercise performance, and lower stress.

And what is so very common among middle-aged and older men today? Quite the opposite of these things: Low T, higher body fat, brain fog, sluggishness, decreased exercise capacity, and high stress levels. This is why Weider Prime is best for these men. But make no mistake, Weider Prime won’t cure you of everything going wrong. Weider Prime will help give you that extra “boost” alongside the adoption of a healthy diet and lifestyle.

There are a few side effects to look out for when taking Weider Prime:

Where to Buy Weider Prime

Each bottle has 30 servings (60 capsules) and costs $28.99, so you’re getting a pretty affordable price at less than a dollar per serving.

B4 Thermogenic Review – Can This Fat Burner Get Rid Of Unwanted Pounds?

Omax Cognitive Boost Review – Can It Benefit Your Brain Health?

HVMN Rise Review – Is This Nootropic Worth The Cost?

Performance Lab Sleep Review – Can This Supplement Improve Your Sleep?