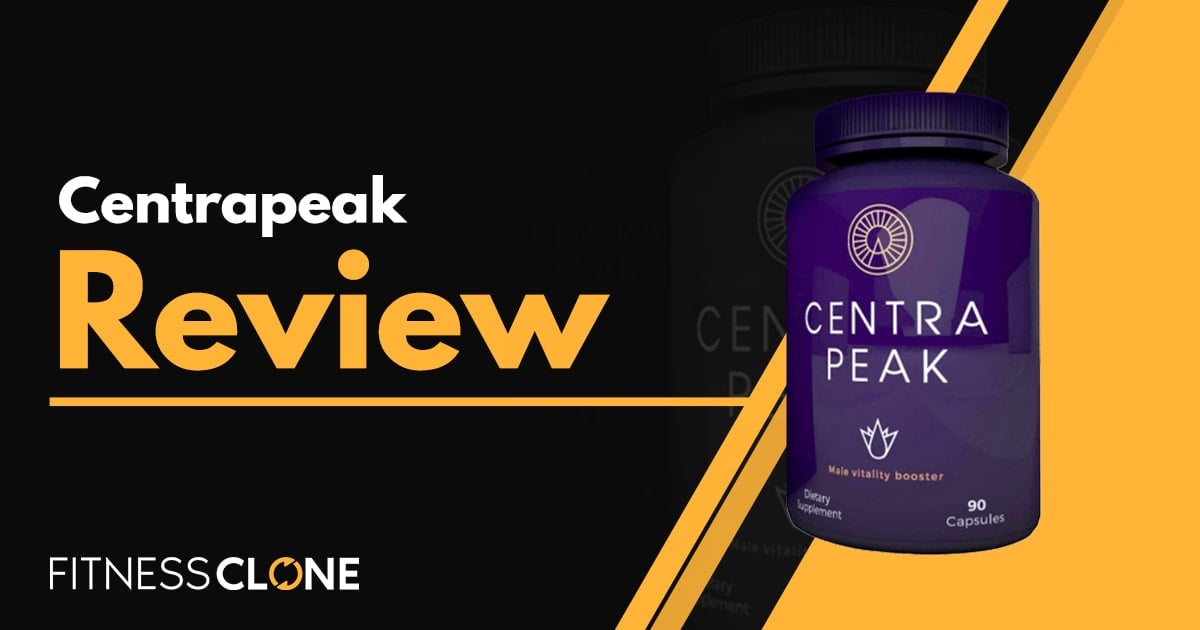 There are boatloads of testosterone supplements out there today, with many of these being pretty effective, but many others that are straight-up garbage. And even when you look at the effective supplements, what exactly makes each one different from the other?

In this Centrapeak review, we’ll discuss those special benefits as well as everything else you need to know about this testosterone booster to find out if it’s truly effective. Let’s get started! 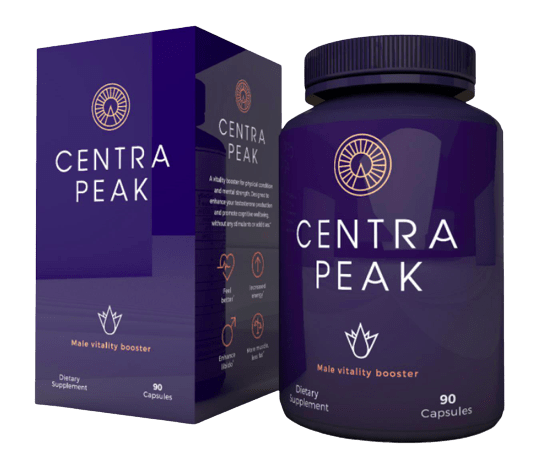 Centrapeak is a male testosterone and vitality booster designed to enhance physical performance and mental strength. While Centrapeak has a lot of similarities to other testosterone boosters, what sets it apart is the additional emphasis put on optimizing mental well-being and cognitive function.

Centrapeak is filled with science-backed ingredients proven to not only boost testosterone but also to optimize cognitive function and mental health. Plus, they included specific nootropic ingredients to further enhance mental clarity and well-being.

So, you get a multi-faceted approach to optimizing your manhood through increased testosterone and enhanced mental functioning with Centrapeak.

Centrapeak is designed to increase testosterone and optimize mental and physical functioning. Specifically, below are the advertised benefits: 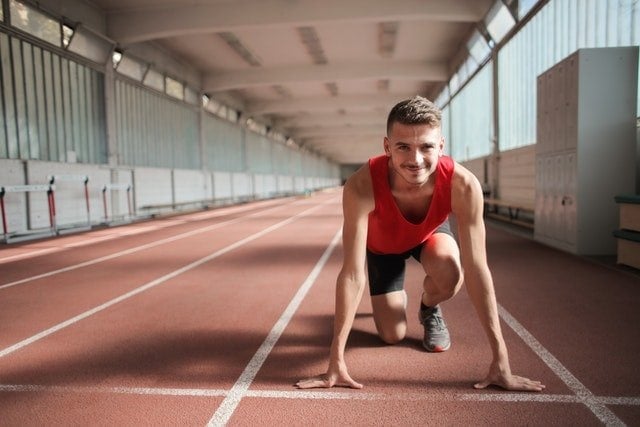 Centrapeak is designed to increase total and free testosterone through many mechanisms, such as by directly stimulating testosterone production, reducing cortisol and stress hormones, inhibiting estrogen, and increasing neurotransmitters related to testosterone. It features key t-boosting ingredients, such as boron, zinc, ashwagandha, indole-3-carbinol, and more.

More testosterone can definitely lead to greater energy levels. And some specific ingredients in Centrapeak that may do that are vitamin B6 and Panax ginseng.

Testosterone is, of course, important for physical performance, and Centrapeak is designed to boost t so you can have more strength and muscle mass, especially with ingredients like ginseng, pine bark, and ashwagandha.

There are also many ingredients in Centrapeak designed to reduce stress and anxiety and improve your mood, confidence, and overall well-being. Such ingredients include tyrosine, magnesium, Rhodiola, phosphatidylserine, and ashwagandha.

You can’t really talk about a testosterone booster without mentioning libido. And Centrapeak is advertised to boost libido and sexual performance so you can get back to your best in the bedroom. Pretty much all of the ingredients may have a role here, but especially zinc, ashwagandha, mucuna pruriens, and ginseng.

So far, it looks like we have a solid supplement on our hands. But let’s take a deeper dive into the inner workings of Centrapeak to see if it can hold its own as a potent and unique testosterone booster and mental enhancer.

There are quite a few ingredients in Centrapeak, so let’s take a look at them: 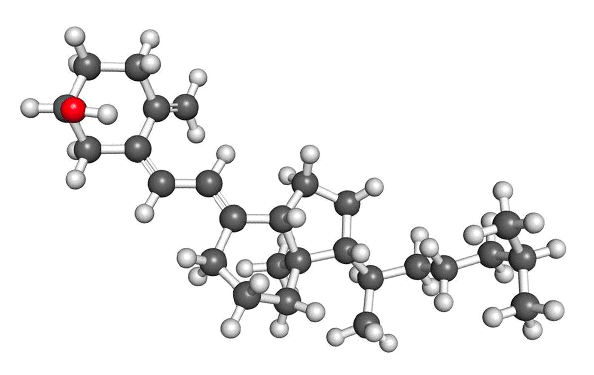 The first ingredient listed is vitamin D3, which is a prohormone compound. Vitamin D is involved in testosterone production in the Leydig cells and for converting testosterone into its most potent form, dihydrotestosterone (DHT). Plus, it has roles in sperm health and even mood. Low levels of vitamin D are associated with low testosterone and depression, among other things, so supplementation can sometimes be beneficial.

Centrapeak also has vitamin B6, which is a b-complex vitamin. Vitamin b6 stimulates the production of testosterone and other androgens and may help to reduce prolactin and estrogen. However, more research is needed to show the benefits of vitamin B6 supplementation specifically.

Vitamin B6 is also important for brain health due to its roles in energy metabolism and neurotransmitter production. And some research shows supplementing can improved mood while reducing anxiety.

You’ll want at least 1 to 2mg, upwards of 10mg in some cases of significant deficiencies.

One of the minerals included in Cebtrapeak is magnesium, which has been dubbed the “original chill pill.” Among its many actions, magnesium helps to reduce cortisol, which can leave more testosterone available. And magnesium supplementation can help restore total and free testosterone levels back to normal in men with a deficiency.

Plus, magnesium decreases sex-hormone binding globulin (SHBG), which also leaves more freely bioavailable testosterone. Other benefits of magnesium include decreased inflammation, improved sleep, and reduced anxiety and depression, along with enhanced recovery from intense exercise. Overall, magnesium is a magnificent mineral for men.

The recommended dosage is usually at least 100mg, but it can be up to 1,000mg in some cases. Centrapeak’s dosage is a bit low at 50mg, meaning if you are looking to boost your dosage of this specific ingredient you may want to take a look at supplementing with a specific magnesium product, like MagTech or Life Extension Magnesium Caps.

You’ll usually see magnesium and zinc in most t-boosting formulas, and Centrapeak is no different. A zinc deficiency is very tightly associated with low testosterone and poor fertility, as well as decreased recovery abilities.

Research shows that high-dose zinc supplementation can increase testosterone levels (likely by stimulating testosterone production in the testes). Plus, zinc is useful for decreasing inflammation, and some research shows zinc increases recovery and testosterone in athletes engaged in intense training.

Also, the combination of vitamin B6, zinc, and magnesium is often used by athletes to boost testosterone and enhance recovery.

A beneficial dose of zinc is typically at least 10mg, sometimes up to 40mg or more.

Up next is vitamin K2 (menaquinone). This form of vitamin K has anti-inflammatory effects, and it also protects against cognitive decline, likely due to its neuroprotective benefits. Plus, vitamin K can reduce testicular inflammation and may be helpful in maintaining or boosting testosterone levels. 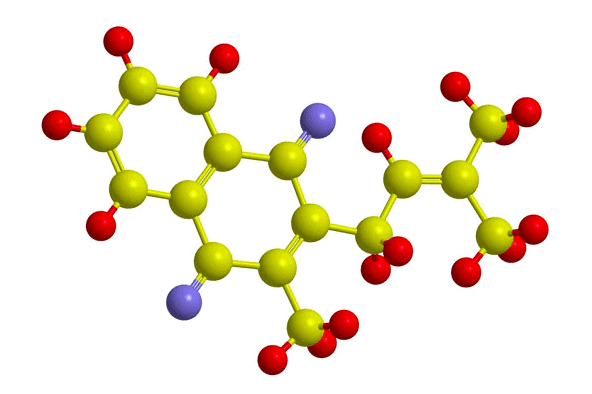 Centrapeak also has indole-3-carbinol (I3C), which is a compound found in cruciferous vegetables. The main reason it’s included is because it can help to decrease levels of estrogen and estrogen’s effects in the body, which leaves room for more testosterone to do its manly work.

Another solid ingredient in Centrapeak is ashwagandha, which is a powerful adaptogenic herb. It works on the HPA-axis and central nervous system to reduce stress, which can lead to many physical and mental benefits.

Research shows it can reduce cortisol and other stress hormones, which leaves room for greater free testosterone. The main researched benefits of ashwagandha are stress and anxiety reduction, but ashwagandha is also proven to increase energy, endurance, testosterone, strength, and recovery capabilities. No wonder it’s said to give men the strength of a horse.

Another adaptogen in Centrapeak is Rhodiola Rosea (or just Rhodiola). Rhodiola works to reduce stress by normalizing stress hormone responses and other physiological responses to stress, thus mitigating the damage that can come from excessive stress.

Plus, compounds in Rhodiola increase energy metabolism by stimulating ATP in the mitochondria. Overall, research shows that Rhodiola is effective for reducing stress and for reducing physical and mental fatigue when in stressful situations.

Usually, 150mg or more is effective.

Panax ginseng is somewhat similar to Rhodiola and ashwagandha since it’s another adaptogen involved in fatigue and stress reduction. Panax ginseng has many different compounds that can help fight fatigue by decreasing inflammation and stress while improving energy metabolism.

Plus, panax ginseng has also been shown to stimulate testosterone production and enhance libido, while also improving sperm health and erectile function.

You’ll typically want at least 200 to 400mg of Panax ginseng. 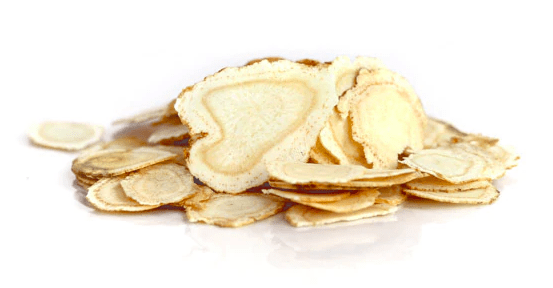 Up next is luteolin, which is a flavonoid compound. It has anti-inflammatory and antioxidant effects and has been shown to offer neuroprotective benefits and to improve memory.

Plus, luteolin acts as an aromatase inhibitor, which means it decreases the amount of estrogen that’s converted from testosterone, leaving more available testosterone.

And its anti-stress effects also relate to its ability to improve mood, immune

Centrapeak also has tyrosine, which is an amino acid. It is a precursor to dopamine and norepinephrine, two neurotransmitters that can be depleted after stressful situations. Tyrosine supplementation appears to improve cognitive performance when people are faced with stressful and highly demanding tasks/situations.

Plus, some research shows tyrosine can elevate mood and even improve athletic performance.

But most often, you’ll need at least 500mg, often much higher than that.

Maritime pine bark extract is rich in phenolics and other compounds known for decreasing inflammation and improving blood sugar levels. Plus, some research shows that pine bark offers neuroprotective benefits. Lastly, pine bark is able to increase nitric oxide, which enhances blood flow around the body and the brain, and it may be useful for erectile dysfunction due to those mechanisms.

Also included is boron, a trace mineral. Boron helps to reduce SHBG, which is one reason why it can increase free testosterone levels. And it also may help decrease the conversion of testosterone to estrogen. Moreover, some studies show that boron can enhance exercise performance (e.g., strength), and it can even boost cognitive function in some cases.

Based on the evidence, you should get some benefits for both testosterone and mental function from Centrapeak. There are many well-researched ingredients in Centrapeak that are proven to increase testosterone in a number of ways, such as by directly stimulating testosterone production, inhibiting estrogen and SHBG, and lowering cortisol.

Plus, many adaptogens and other ingredients in here, such as Rhodiola, mucuna pruriens, ashwagandha, phosphatidylserine, tyrosine, and ginseng, are known to provide further benefits for cognitive function, mental well-being, mood, and stress reduction.

One of the primary concerns, however, is the lack of effective dosages for some of the ingredients. For example, Centrapeak has lower than optimal amounts of magnesium, vitamin K2, ashwagandha, Rhodiola, mucuna pruriens, ginseng, phosphatidylserine, and tyrosine.

This doesn’t mean that they won’t help, but just that you might not be getting as much out of them as possible. Another thing to consider is that since ashwagandha, Rhodiola, and ginseng all have similar actions, the lower doses might not matter as much.

So, Centrapeak will most likely lead to the improvements it suggests, but the effects might just be mild to moderate rather than anything huge. Centrapeak definitely should lead to an increase in total and free testosterone, along with improvements in energy, mental well-being, and libido. It could also possibly increase strength and muscle mass, but I doubt that it would be anything more than a couple extra pounds (still helpful, however).

Who is Centrapeak Best For?

Based on Centrapeak’s ability to increase testosterone and also enhance mood and well-being, it seems best for older men who want more testosterone, energy, and mental function. With that being said, any man who is experiencing a drop in energy, performance, mood, or vitality could benefit from Centrapeak. 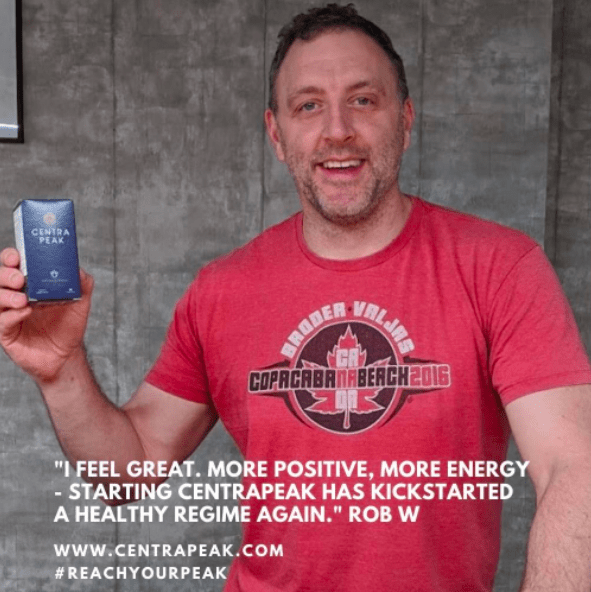 The point is, if you’re not feeling as strong and powerful as you used to, Centrapeak could probably help bring a little of that back.

Centrapeak should generally pose little to no risk for most, but below are some possible side effects:

Also, Centrapeak is free from any WADA-banned substances, and the ingredients are third-party tested by an independent laboratory.

Plus, it is only manufactured in GMP-certified facilities.

Where to Buy Centrapeak

You can buy Centrapeak on their main website at this link. 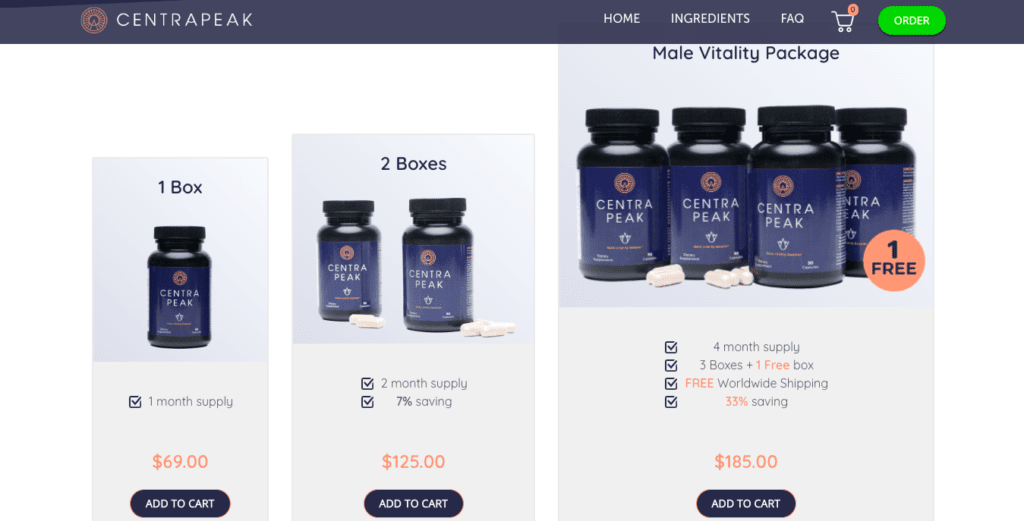 You can buy 1, 2, 3, or 4 boxes of Centrapeak at a time. Below, we will detail the pricing available.

So, the lowest price you’ll pay per serving is $1.54, and the highest you’ll pay is $2.30. Thus, Centrapeak is not exactly a cheap product, especially if you only purchase one or two boxes.

Primal Harvest Keto Collagen Review – Is This Supplement Right For You?

Sundaily Review – What Does This Oral Skin Care Gummy Do?

SkinnyMint Teatox Review- Will This Teatox Benefit Your Health?

Zhou Spirulina Review – Is This Supplement Powder Worth The Price?

Ancient Nutrition Organic SuperGreens Review – How Does This Powder Measure Up?