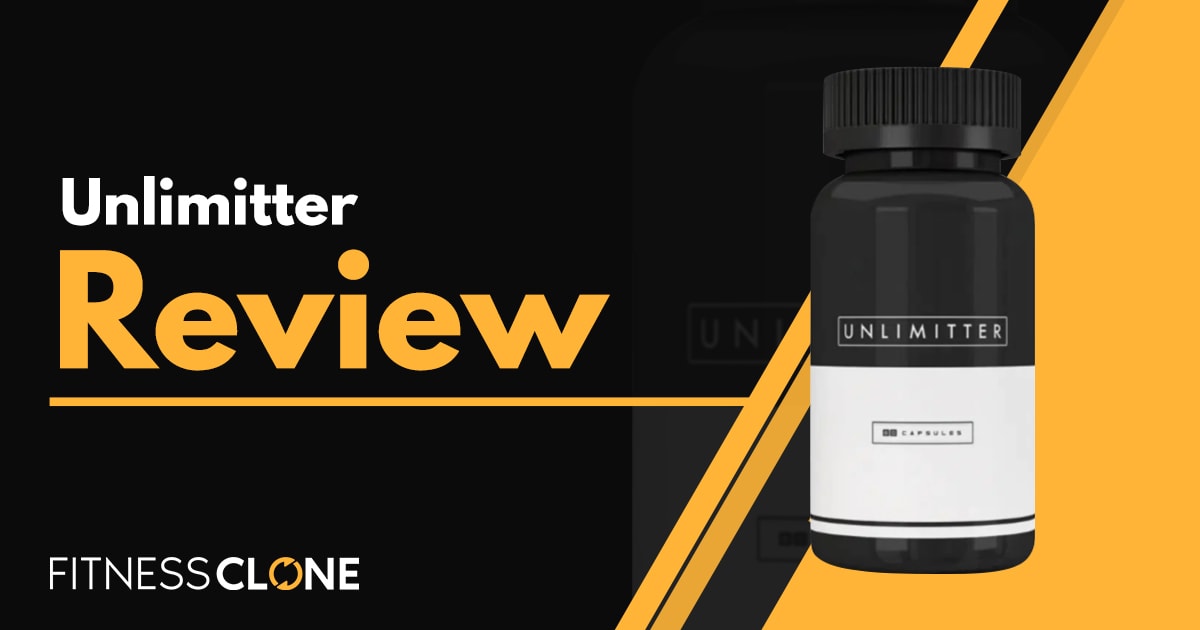 Enhancing brain power to our utmost potential is often an intriguing idea for many.

Maybe that’s part of the reason we find movies like Limitless or Lucy so fascinating.

Now, these movies are an exaggeration. But there definitely are things that we can do to at least enhance our brain capacity and improve overall cognition.

And yes, this includes the use of supplements called nootropics. As a holistic health practitioner, I’ve seen many of these come out lately. But not all of them are actually effective (or safe).

So, in this review, I’m going to go over a nootropic called Unlimitter to see not only if it works, but if it’s also safe and recommendable for most people. Keep reading this Unlimitter review to learn about the company, ingredients, possible benefits, pricing, and more.

Unlimitter is advertised as the ultimate nootropic supplement, formulated specifically to enhance key cognitive functions of the brain.

With bacopa, tyrosine, ginkgo, and other ingredients, Unlimitter is designed to put you into that flow state where everything comes easy, and you reach your highest cognitive potential.

Plus, you only need to take two pills a day, making it a potentially super convenient way to boost brain power. And unlike some other supplements, Unlimitter is designed to give you even better improvements the longer you take it.

Unlimitter is advertised to give you a number of brain-boosting benefits, including:

It’s hard to find someone who doesn’t want better focus these days, especially with so many things that are distracting.

And one of the advertised benefits of Unlimitter is improved focus. Unlimitter claims to have key ingredients to improve mental clarity and get you into the zone, such as CDP choline. In turn, you may be more efficient, dialed in, and productive for whatever you need to do.

Fatigue and drowsiness can put a real roadblock in your work, school, or sport performance. But many people often deal with these problems on a regular basis, whether that’s the entire day or at specific times, like the afternoon after lunch.

Unlimitter contains a moderate amount of caffeine along with tyrosine and other ingredients to boost your mental energy and alertness, but without causing jitters or negative side effects. This may help you have more energy for all the things you want (and need) to get done in the day, while making it more effortless.

Some days, you just don’t have your usual motivation. After all, no one is happy-go-lucky all of the time. The important thing is that you don’t stay down in that hole for long.

And Unlimitter claims to address this by using key mood-boosting compounds, such as ashwagandha and caffeine. They say that these will improve your mental outlook and motivation, so you can have the drive to get more done and feel good while doing it.

One of the most common concerns, particularly for older individuals, is declining memory problems. But even young people are looking to improve their memory to increase their intelligence, do better on exams or work projects, or simply have more knowledge.

While Unlimitter doesn’t claim to reduce the risk of severe memory problems, they do state that this formula offers general memory support. This is due mainly to bacopa and choline, which may give you that mental edge needed for memory enhancement.

All in all, the benefits listed above are all involved in mental performance optimization. And that’s the main general claim of what Unlimitter does for you.

But is Unlimitter really a top-of-the-line supplement for cognitive performance and mental enhancement?

Read on to find out!

The Unlimitter formula is crafted with seven main ingredients.

Below are the Unlimitter ingredients:

It contains a number of bioactive compounds, such as bacosides. And Bacopa may help prevent nerve damage in the brain, while also protecting against brain inflammation. Plus, it seems to stimulate new brain cells and overall nerve communication.

There is a little evidence that Bacopa can improve memory while also reducing levels of anxiety and depression, but more human studies are needed.

CDP choline (aka citicoline) is a choline compound that gets broken down to choline and cytidine after consumption.

Now, choline is a precursor to acetylcholine, which is a neurotransmitter (brain chemical) important for memory, focus, and other cognitive actions.

And cytidine eventually turns into uridine, which may have neuroprotective effects.

Altogether, CDP choline seems to protect the brain from nerve damage while also supporting general brain cell function, while increasing brain-derived neurotrophic factor (BDNF). And there is some evidence that citicoline can improve memory, focus, and attention.

Ginkgo biloba is an herb, which was traditionally used in Chinese medicine. It has various active substances, such as ginkgolides, which offer antioxidant and anti-inflammatory effects in the brain.

Plus, Ginkgo may increase brain blood flow and protect the brain against neurotoxicity. And it may increase serotonin and BDNF.

Overall, there is some evidence that Ginkgo can improve cognitive functions, such as memory, information processing and attention. And it may also improve mood while reducing anxiety and depression.

L-tyrosine is an amino acid and a precursor to dopamine and norepinephrine, which are both neurotransmitters.

Dopamine and norepinephrine are needed for energy, alertness, motivation, and general mood. But stress can deplete these, which may result in declined cognitive function.

Yet, tyrosine seems to help restore cognitive function when under stress, which is mainly by increasing the levels of those brain chemicals back to normal levels.

L-leucine is a branched-chain amino acid (BCAA) most often used for muscle recovery and growth.

In general, leucine is important for the production of some neurotransmitters and general cognitive function. But it’s unclear if supplementing has any major benefit on mental performance.

Ashwagandha is a medicinal herb with historical use in Ayurveda and Indian medicine. This plant has many bioactive compounds, such as withanolides. These offer general brain protection and cognitive support due to decreased inflammation and nerve cell support.

One possible benefit of ashwagandha is decreased stress and anxiety, which occurs from its regulating effect on how the body handles stress. And it can also increase GABA (a calming neurotransmitter) while reducing cortisol (a stress hormone).

Additionally, ashwagandha has been shown in some studies to improve memory, attention, focus, and other cognitive functions.

Ashwagandha is included in many stress-reducing supplements too, such as Avantera Unwind.

The last ingredient in Unlimitter is good ol’ caffeine. This well-known stimulant increases dopamine, serotonin, norepinephrine, and other neurotransmitters. And it decreases adenosine to make you less tired.

It offers a boost in energy, alertness, and mood in many people who take it. And there is evidence that caffeine can improve cognitive functions, such as processing speed, memory, and even focus if taken in moderate doses.

No wonder so many people reach for that cup o’ joe every morning!

Now to the question you’ve likely been wondering: does Unlimitter work?

Overall, I’d say it is likely that Unlimitter is an effective nootropic formula.

It has a great mix of evidence-based ingredients that support or enhance cognitive functions, mood, energy, and alertness.

I don’t like that it includes proprietary blends, which makes it impossible to gauge the dosage. And it is probably underdosed, for example, Bacopa itself usually should be around 300mg, but the total weight of the blend its in is only 320mg.

If you don’t want a proprietary blend and are looking for a higher-dosed option, you may want to go with another supplement, such as Hunter Focus.

Most of the ingredients in Unlimitter are well-researched and proven to offer the benefits claimed by Unlimitter.

But just be careful with your expectations. Based on the ingredients and dosages I see, what you could get from Unlimitter is a mild to medium improvement in energy, alertness, focus, and attention. Plus, it may offer support for memory and may even help reduce some stress and anxiety.

It definitely won’t jack up your brain power 500% or something crazy like that; but it may add that little cognitive boost you need, particularly on days when you’re stressed, tired, or lacking motivation.

Who is Unlimitter Best For?

Unlimitter is best for anyone who wants to get a boost in cognitive function and mental performance, whether that’s for work, school, athletics, or just day-to-day tasks.

Unlimitter contains ingredients that are generally safe to take in the recommended dosages.

Possible side effects include headache, upset stomach or other digestive symptoms, and dizziness. Also, caffeine may produce anxiety, jitters, nervousness, or insomnia in sensitive people.

Also, all of the Unlimitter ingredients are all-natural and put through rigorous quality testing. And Unlimitter is 100% vegan and gluten-free, and made in a GMP-certified, FDA-approved facility.

You are supposed to take the Unlimitter capsules with a light meal, daily.

The recommended dose is two capsules.

Unlimitter also recommends trying out the product for at least one month before determining the product’s effectiveness.

Each bottle has 30 servings (60 capsules). You can buy one, two, or three bottles at a time. And with all options, you can also choose a one-time purchase or the Subscribe & Save option to save 20%.

Below are the prices for Unlimitter, with the subscription pricing on the right:

Unlimitter is definitely one of the lower-priced nootropic supplements out there, with nearly every option under a dollar per serving.

They offer standard shipping rates for all orders.

Also, they have a 30-Day Money-Back Guarantee. So, if you’re unsatisfied, you can let them know for a refund. Just start your return within 30 days of purchase.

I also wanted to give you an idea of how Unlimitter compares to some popular nootropics, such as Mind Lab Pro and Hunter Focus.

Hunter Focus and Mind Lab Pro both have many of the same ingredients as Unlimitter, such as tyrosine, ginkgo, bacopa, and citicoline. But they also have many more ingredients, such as lion’s mane, Rhodiola, B vitamins, and ginseng.

And both Hunter Focus and Mind Lab Pro list out all of their ingredients on fully transparent labels.

Of course, they’re also much more expensive than Unlimitter, so it’s important to consider what you value and prefer when buying nootropics. I’m not saying Unlimitter isn’t good, just that it doesn’t necessarily match up with some of the top-tier products necessarily.

That’s the end of this Unlimitter review.

You’ve now seen the ins and outs of this nootropic supplement and how it compares to others within this massive industry.

Overall, Unlimitter is a solid cognitive supplement, particularly for people who are just looking for a little extra boost in mental performance. It’s not as highly-dosed as some other nootropics, but the ingredient quality is definitely still high. And it’s also very low-priced.

So, I recommend it if you’re looking for a low-priced, but still high-quality brain booster.

FitTrack Atria Review: How Does This Smart Watch Compare?

Vitamin Bounty Get Into Keto Review – Is This Supplement Worth Buying?

Onnit Total Gut Health Review – Is This Supplement Worth It?