Hydrant’s Rapid Hydration Mix Review – Is It Worth The Cost? 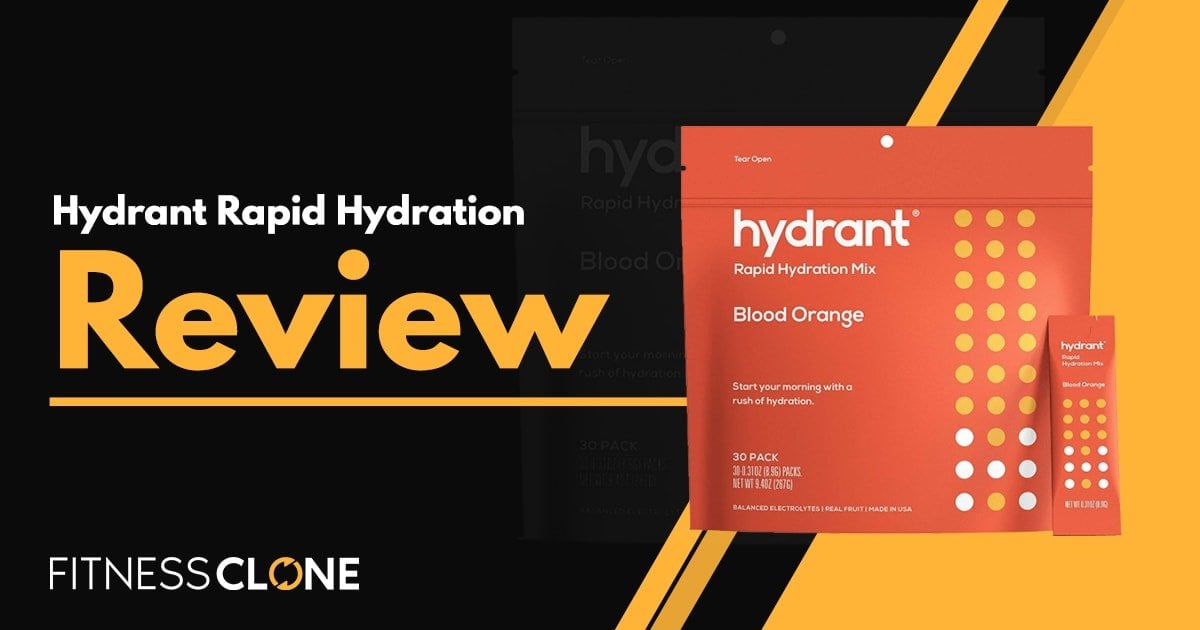 Hydrant’s Rapid Hydration Mix is a powdered blend of electrolytes and sugar that comes in individual packets. You can mix it in water first thing in the morning, before/after workouts and/or on the go. The idea behind Hydrant is that it ensures optimal hydration, which helps you feel good and perform at a high level.

So the function of water is to essentially maintain your equilibrium. Pretty important, huh? Water also helps send nutrients into your cells as well as remove the waste out of them.

In addition to good ol’ H20, electrolytes such as sodium, chloride and potassium are needed for hydration. Electrolytes are minerals that become charged when dissolved in fluid. Sodium and chloride stabilize the fluid level around your cells, allowing them them to work properly. Potassium does the same thing, while also limiting blood pressure spikes caused by too much sodium. Obviously your body is made up of cells, so in order for it to operate effectively, you have to be well-hydrated.

You become dehydrated when you lose more fluid than you take in. Symptoms of dehydration include fatigue, dizziness and confusion. Hydration even affects how well you handle stress and act in social situations. Think of your hydration level like the strength bar in a video game. Even mild dehydration can affect concentration, mood, energy and aerobic capacity. Dehydration also impacts performance during and recovery after resistance training.

What are some Causes of Dehydration?

Hydrant claims its competition is “slow and ineffective when it comes to hydration” and that its competitors use “way too much sugar, taste too sweet or are filled with artificial ingredients.”

Hydrant also claims its “electrolyte balance mirrors your body’s own when you are at your best.” It also claims that Hydrant contains 1/3rd of the sugar in regular sports drinks and a little sugar accelerates the absorption of electrolytes and water, allowing you to rehydrate faster and more efficiently.

Although magnesium and zinc are important minerals, very little of either is lost in sweat and the World Health Organization doesn’t include them in its oral rehydration formula. Nevertheless, both magnesium and zinc have many benefits and deficiencies in these minerals are common, so including them isn’t necessarily bad thing.

Hydrant also claims that mild dehydration causes fatigue and brain fog and that 75% of the population is dehydrated. Although multiple websites reference this 75% figure, according to the Food and Nutrition Board, “The vast majority of healthy people meet their daily hydration needs by letting thirst be their guide.” It is probable that even mild dehydration affects mood, concentration and energy. However, in cases of mild dehydration, there’s no clear evidence that supplementing electrolytes restore optimal mental and physical performance better than just drinking water and eating food.

Although sugar can help with hydration, most people get enough through their diet. Therefore, even a small amount isn’t necessary, unless you’re:

Where to Buy + Cost 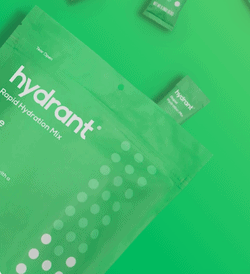 Get $5 off HydrantWe scour the web for the best deals on supplements. Want to save $5 on your Hydrant order? Click the button below to get the deal!GET THE DEAL

How does Hydrant Stack Up with its Competition?

Hydrant does use natural ingredients, but the reality is there’s still some competition out there.

Hydrant is a much better option than Gatorade G2 if you are willing and able to pay more for natural ingredients. G ESSNTL is more of an option for athletes because of the high sugar content.

Right off the bat you can see that Skratch has significantly more sodium, no chloride (they get their sodium from sodium citrate like Hydrant, but Hydrant also has salt, which one would imagine means sodium chloride), significantly less potassium, significantly more sugar, about the same amount of magnesium, no zinc and some calcium.

Zinc is beneficial add-in for exercise recovery, but unnecessary to supplement for rehydration. Calcium is an important electrolyte, but not as necessary as sodium, chloride and potassium when it comes to hydration.

Dextrose is a sugar derived from corn. It can be used for dehydration, as a sweeter and after a workout to restore glycogen faster and improve muscle repair. Although dextrose is technically unnatural and too much can cause side effects, as long as you’re monitoring your sugar intake, a little bit should actually be beneficial, especially for hydration and exercise recovery.

Another difference is that Skratch uses the lactate form of magnesium as opposed to Hydrant’s use of magnesium glucose. Lactate has the added benefit of saving blood sugar and glycogen stores during intense workouts. So Skratch wins there.

Skratch sells a bulk powder with 60 servings, which (as of now) Hydrant doesn’t. The bulk powder comes out to 82 cents per serving. Skratch sells individually-wrapped packets as well, which are $35 for a 20 pack, or $1.75 each. Skratch also has an Anytime mix which comes out to $23 for a pack of 20, or $1.15 each. It has the exact same ingredients with significantly less sodium, slightly more potassium, significantly less sugar, significantly more calcium and less magnesium.

Overall, Hydrant has the edge here for the price and content of their convenient individually-wrapped servings.

Nuun Sport is another popular electrolyte supplement. It comes in tablet form and dissolves in water. It comes out to 54 cents per serving if you buy it in bulk on Amazon. Nuun has 300mg of sodium (as sodium bicarbonate and carbonate), 150mg of potassium (as potassium bicarbonate and potassium chloride), 40mg of chloride, 25mg of magnesium (as magnesium oxide), 13mg of calcium (as calcium carbonate) and 1g of sugar. It also contains dextrose.

Nuun has significantly more sodium, no zinc, poorly absorbed magnesium oxide and a tiny amount of sugar. Hydrant has a slight edge here in terms of ingredients, but Nuun is a better bet overall if you factor in cost.

Hydrant has the edge here as well for its convenient individually-wrapped packets because Vega’s have significantly less potassium. Vega doesn’t have zinc or sugar and it contains vitamin C. Its bulk powder is almost half the price of Hydrant.

You can also make your own electrolyte drink with mineral water, a pinch of sea salt, a drizzle of honey and a splash of lemon juice. Coconut water and watermelon juice are also good options as they are both high in potassium. You could even take glass, fill it up halfway with water, splash in some orange juice for the potassium and sugar and add a pinch of sea salt.

Also, don’t forget that food contains electrolytes. When you’re drinking water and eating electrolyte-rich food, you’re rehydrating. Cottage cheese is high in sodium, many vegetables such as celery are high in chloride and bananas, avocados, sweet potatoes, leafy greens and beans are all rich in potassium.

One benefit of Hydrant is its portability. You can take these cute lil’ packages with you anywhere and don’t have to worry about keeping a bottled electrolyte drink cold. This is great for summertime, trips or when you’re out and about and don’t have access to a fridge. It’s also convenient to have on hand in case you get sick.

Another advantage of individually-wrapped servings is that they stay fresher than bulk powder, although they’re obviously not as economical or environmentally-friendly.

Who is Hydrant Best For?

Some people say that supplementing electrolytes can mitigate exercise-related muscle cramps, but in reality, that’s only the case a small percentage of the time.

You can take Hydrant in the morning (whether or not you’re hungover), but that’s not the most natural or cost effective way to go about it. it would be better to concoct your own rehydrating drink or buy a bulk powder.

Although Hydrant is safe and generally well-tolerated, some people have reported stomach discomfort with similar electrolyte powders. If you experience stomach issues with Hydrant, you can try another brand or make your own natural electrolyte drink.

Lime, grapefruit and blood orange are pretty cool flavors and at least one of them should jive with most people. I also like that Hydrant isn’t overwhelming you with options, while still giving you a few choices. Based on Amazon reviews, a couple people said Hydrant makes it easier to drink water. One person said it was too salty and another said it wasn’t too sweet. Another person said the grapefruit flavor was terrible.

Being well-hydrated is crucial for mental health as well as exercise performance and recovery. However, you probably don’t need to supplement electrolytes if you’re drinking enough water and eating a balanced diet. Most people don’t need Hydrant. Its claims that it will help with fatigue and things of that nature are unsubstantiated in most cases.

Hydrant is worth a try for people who work or exercise in the heat for extended periods of time. If you are looking to optimize your hydration at home or in the office, there are more cost effective and natural options out there.

You don’t need Hydrant if you exercise a normal amount. If you’re an athlete, taking Hydrant can improve your performance and recovery.

Hydrant has a clean electrolyte label. Many of its competitors include other minerals, vitamins, herbs and even artificial ingredients in their products. The extra minerals, vitamins and/or herbs obviously might not be a bad thing, depending on what you’re looking for.

Spending money on a product like Hydrant is more for convenience or when you need to rehydrate quickly (during and after a long, intense workout in the heat, for example).