C4 Dynasty Review – How Does This Supplement Powder Compare? 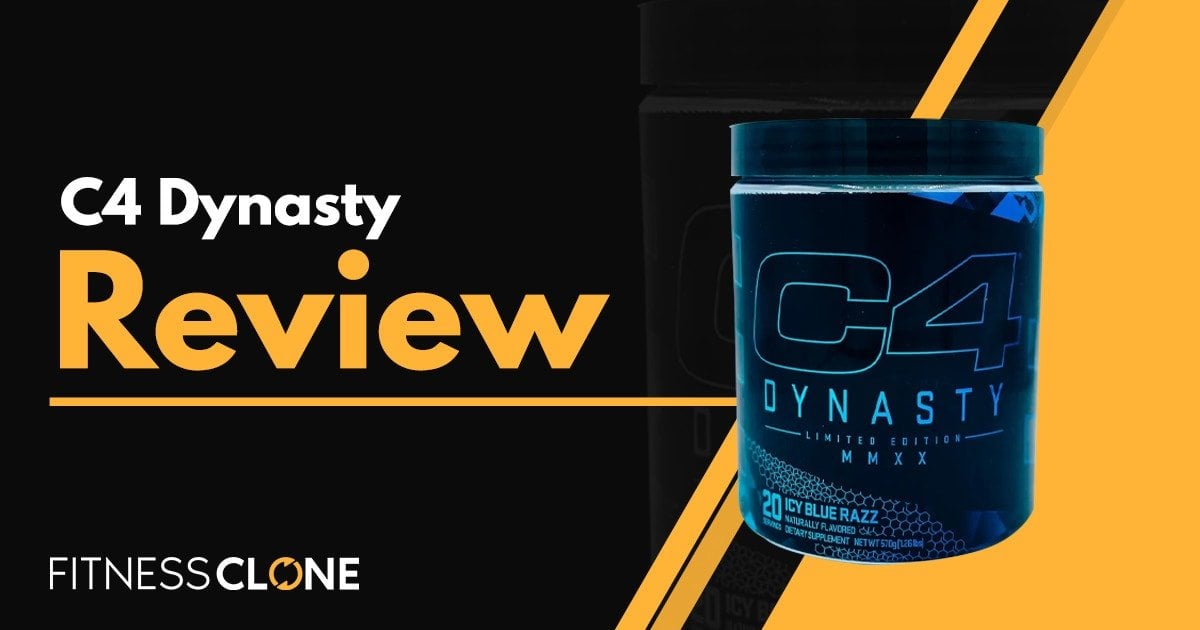 Cellucor considers themselves pioneers in pre-workout performance and explosive energy, and have put a decade of art, science, and obsession into the creation of C4 Dynasty MMXX (also simply known as C4 Dynasty). They allegedly stir this stuff up in small batches, which could be any sized batch when you think about it so long as they call it “small.”

Still, they do claim to have a great product, and we do like the idea of their microbrew-mentality, so let’s have a look and see what they’ve got. In this C4 Dynasty review, we’ll discuss everything you need to know about this supplement powder before making your final decision.

C4 Dynasty was created and produced by the popular supplement company, Cellucor. The same creators of the well-known supplement Cellucor Super HD, Cellucor aims to provide top-of-the-line supplements to meet your needs. For its 10th anniversary, Cellucor’s beloved C4 Dynasty has gotten a limited-batch makeover that we somehow get the funny feeling will make it into their regular product rotation.

That said, C4 Dynasty ups the ante of the original by combining 18-ingredients—10 of which are patented—in a formula meant to cause energy to come oozing from your pores. That, and a lot of sweat, since this stuff starts with a boatload of caffeine and goes from there, so it’s gotta rev you up.

At 350 mg, and along with a whole host of other goodies to get your scalp tingling, this stuff is NOT for the stimulant-intolerant. Along with enough caffeine to get your heart pumping like a bird’s, it’s got teacrine and huperzine A to get you really honed in and working hard.

This also increases the product’s value (hint: they ain’t givin’ this stuff away to start with), since the last thing you’ll need are any $7 double lattes to get you even more wired—not that that’s what we think you drink, though if you do, think of the savings!

Huperzine A is popular in the brain health community and shows promise in the treatment of Alzheimer’s disease. It has shown positive results in studies for its effects on cognitive function, behavioral disturbance, and functional performance.

There are also the obvious effects of lots of stimulants, though excessive caffeine on its own can have the opposite effect you’re looking for and leave you scattered and irritable. But this is where teacrine comes in to combine with caffeine for a “cleaner” sense of stimulation and focus that won’t have you crashing back to earth later.

This doesn’t mean you’ll necessarily sleep well, or that it’s a good idea to knock back other sources of caffeine along with C4, though it will have you honed in for the gym.

With an increase in blood flow comes a boost in endurance and exercise capacity, and thanks to compounds such as Rauwolfia, l-citrulline, and Vasodrive-AP, C4 Dynasty delivers just that. They increase your body’s nitric oxide levels, which relaxes veins and eases your heart’s burden by lowering blood pressure. This not only increases your stamina and endurance, but produces greater pumps and counters the effects of the caffeine and other blood pressure-raising stimulants in the product.

C4 Dynasty’s formula includes a variety of complexes, matrixes, and other ingredients. Below, we will take a closer look at what is included in C4 Dynasty.

A ton of caffeine on its own can have ill effects, especially if you’re sensitive to it. Our personal experience with too many double espressos is becoming scattered, irritable, and wide awake when it’s time for bed.

But along with teaming up with caffeine to boost your energy, endurance, and workout capacity, Teacrine also increases dopamine levels for a less-twitchy mood and laser focus. Your body also doesn’t increase its tolerance for Teacrine so that, unlike many stimulants, you don’t need continuously more to achieve the same results.

Finally, while Teacrine may be similar in many ways to caffeine, it is unlike caffeine in that it doesn’t last as long. It also wears off gently and lowers you back down via a golden parachute, as opposed to how caffeine just shoves you out the airplane door to go screaming back to earth. This means it’s less likely to inhibit sleep, though there’s still plenty of caffeine in here to do that if you’re at all sensitive to it.

Okay, so Carnosyn is a patented form of beta-alanine. How different is this patented version? It does allegedly have some additional benefits, though the main job of beta-alanine for the purpose is to convert to carnosine, which has the beautiful quality of reducing the pain of lactic buildup.

No “lactic governor” to limit your lifts! Your strength and endurance go up, as do your power and strength. This is good, since you’re going to have a LOT of caffeine to burn off using this formula—which is kind of how it’s meant to work when you think about it.

Ya’ gotta’ have PUMPS, which L-citrulline and the ingredients in Vasodrive-AP® deliver via enhanced nitric oxide levels. This loosens and relaxes blood vessels, so your blood pressure goes down while your heart’s efficiency goes up.

And when your heart is working at its maximum efficiency, so are you.

If you’ve been hitting the gym for any length of time, it’s likely you’re already aware of creatine and what it can do for your power and strength. And in case you don’t, it helps produce ATP molecules in you, which are what help fuel your cellular fires and give you energy.

It also has other benefits, such as boosting growth hormone and other androgen levels, though the bottom line is that creatine, in combination with C4 MMXX’s other ingredients, is all you need to become an animal in the gym.

Speaking of ATP, Peak ATP is identical in structure to that produced by the human body, and boosts power, blood flow, energy, and performance just like the Real McCoy—just that it’s a patented formula that only Peak ATP knows, so there.

Basically though, it’s kind of like juicing with ATP instead of hormones.

Then there’s elevATP, which is a combination of ancient moss and apple skins that stimulates your body’s production of ATP (adenosine triphosphate, just in case anyone’s curious).

And of course, this combo, along with the creatine and other good stuff in C4 MMXX, means you’ll have ATP—and energy—oozing from your ears.

Finally, just to really lock you in, Cellucor adds some compounds that will get your brain cells communicating like champs. This includes Huperzine A, which is often used to protect against age-related cognitive decline, boost memory and learning, and as a treatment for Alzheimer’s disease.

It also includes AlphaSize, which is an enhanced form of choline, which is a water-soluble compound similar to B-complex vitamins that’s an important part of brain and nerve health.

And along with the healthy nerve support of taurine and N-acetyl L-tyrosine, everything combines so you can overcome the jitters of all the caffeine in C4 Dynasty MMXX. Just kidding—the Teacrine and rauwolfia, along with all the nitric boosters, should mellow things out nicely for you, and will pair nicely with these ingredients for laser focus.

Ready to really get ready? Cellucor has your formula. It’s not only one of the most potent pre-workout energizers on the market, it contains no artificial crap or synthetic dyes, making it one of the cleaner products of its kind.

And it will also send you to your workouts sharp, focused, and ready to leave it all on the floor like you should.

So yeah, it works.

Who is C4 Dynasty Best For?

C4 Dynasty is best for those not sensitive to caffeine (thanks there, Cpt. Obvious…), and who are looking for whirlwind energy, laser-focus, and mega-pumps. It’s for those who are over 18, and while it can benefit endurance and field athletes as well as gym rats, you may want to check your sport’s banned substance list first to avoid an embarrassing piss test.

This is also a great formula for those needing a mental edge at work or school, especially if you have a gym to take breaks in.

They claim it took them 10-years to create this stuff, and we have no reason to doubt them.

They also claim it’s wicked-potent, which one look at the ingredient list tells you they’re right!

So yes, like most companies hoping to retain customers, C4 MMXX does what Cellucor claims it will.

In case you missed the memo, stimulants have side effects. They elevate blood pressure, cause irritability, keep you from getting a good night’s rest, and the list goes on.

The product should also NOT be used by anyone under the age of 18, or who is pregnant or nursing. The same goes for those on blood pressure medications or who suffer any chronic diseases that affects cardiovascular health, and anyone on medication or under a doctor’s care should consult with their physician before using C4 MMXX.

Finally, for guys, this stuff can do a number on your prostate, so if you’re already having trouble taking a nice streaming whiz due to an enlarged prostate, skipping this formula is in your best interest.

Where to Buy C4 Dynasty

If you’re interested in giving C4 Dynasty a try, you can purchase it directly from their official website here.

A 20-serving bottle of C4 Dynasty is priced at $69.99 for a one-time purchase, making it a somewhat more expensive option. 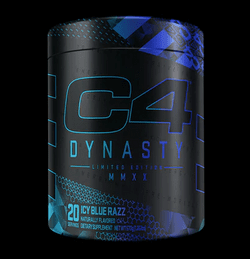 Get up to 30% off C4 DynastyWe scour the web for the best deals on supplements. Want to save up to 30% on your C4 Dynasty order? Click the button below to get this deal!GET THE DEAL

Cellucor does offer a subscribe and save option, as well. If you choose to subscribe, you’ll get 30% off your first order and 20% off each order after, bringing the price down to $48.99. You’ll also receive free shipping if you subscribe.

C4 Dynasty is available in 4 flavors: violet crown, icy blue razz, fruit punch, and strawberry lemonade. With multiple flavors and subscription savings available, C4 Dynasty is worth the try if you’re looking for a new pre-workout!

The Myers Way Multivitamin Review – Is It Worth The Purchase?

Mood Up Stress Down Review – Can This Well Roots Supplement Brighten Your Mood?

Oxygen Plus Review – Are They Worth The Price?

Organifi Green Juice Review – How Does It Rank?

Thrivous Serenity Review – A Thorough Look At This Nightly Nootropic

Gorilla Mind Rush Review – How Does This Nootropic Compare?