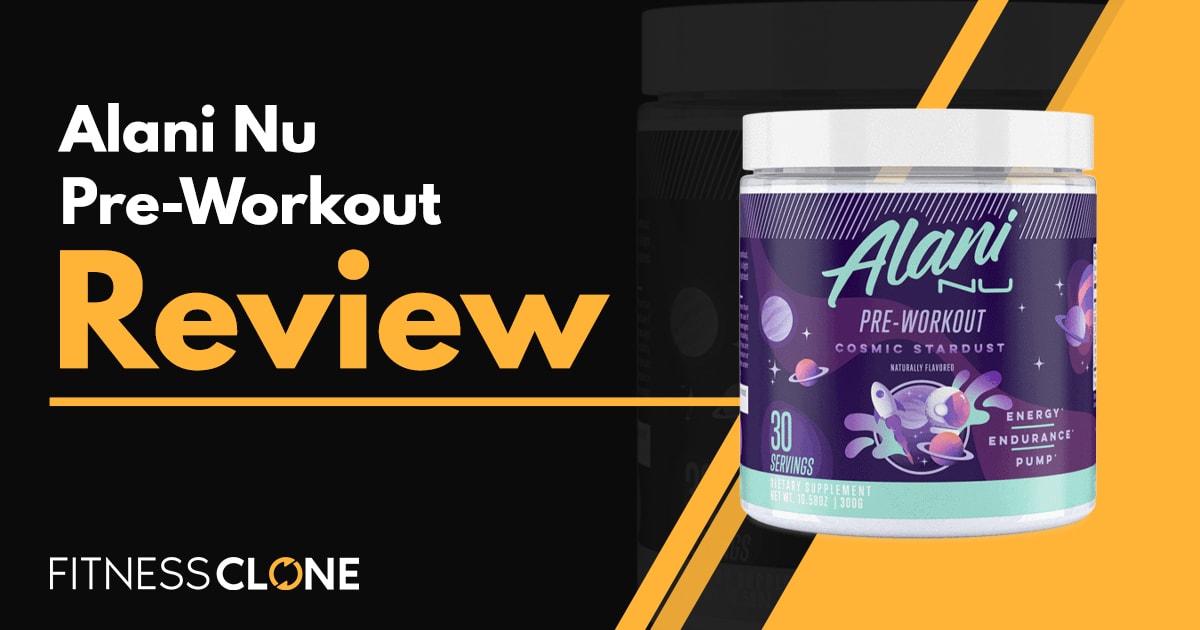 Alani Nu knows that the biggest gains happen in the last set, the last mile, and the last rep you manage from your body, and they’re here to help you find your strength to hit those finish lines. In fact, their entire mission is to help you succeed by creating fitness supplements you can trust.

So let’s take a look at one specific formula of theirs, Alani Nu Pre-Workout & Recovery. This formula is designed to maximize your workout, but does it live up to all its claims? In this Alani Nu Pre-Workout review, we’re going to discuss everything you need to know about this supplement. We’ll go into detail about this pre-workout powder’s ingredients, benefits, claims, pricing, and more so you can make the final call.

Ready to learn more? Let’s get started with this Alani Nu Pre-Workout review!

Alani Nu Pre-Workout combines amino acids and a sharp dose of caffeine in a formula meant to get you revved up to do even better than the last time. It includes amino acids proven to boost nitric oxide and growth hormone while sending your lactic threshold sky-high so that you can rip through your workout focused, full of energy, and with more time to exhaustion. 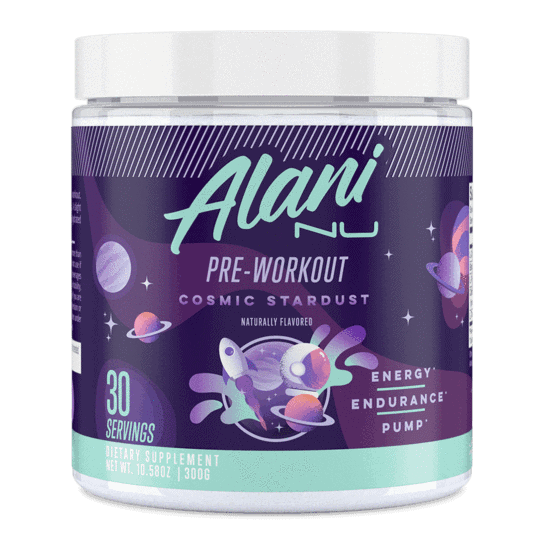 Not only does the caffeine in this formula provide what caffeine provides—extra zip—boosting your nitric oxide levels allows you to work harder, longer, and with more intensity for greater results. It also contains L-tyrosine that helps produce dopamine, adrenalin, and thyroid hormones to rev you up and boost your metabolism.

All of this provides the pre-workout energy, stamina, and focus you need to maximize your efforts and results in the gym, on the running trails, and anywhere else you seek a boost in exercise performance. 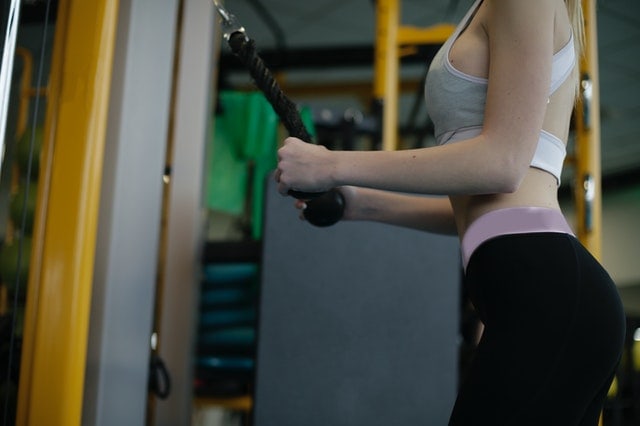 The bummer about caffeine is the scattered, twitchy, irritable sense you’re left with after consuming too much and crashing. This is often made worse by the fact that even when you’re done feeling its effects, too much caffeine can leave you wired and staring at the ceiling into the wee hours of the night as sleep eludes you.

But adding the soothing, focused-yet-relaxed effects of L-theanine to the mix helps this, as does you minding your other sources of caffeine you ingest during your day (we’re looking at you, chocolate!).

This gives you the ability to think clearly, remain calm no matter what, and lock in with razor focus so that by the time you’re done with your workout, you probably won’t even know how long you’ve been at it!

All Natural, and Mostly Safe

Other than the high dose of caffeine in the product, everything else is either produced in your body or is (likely) used by you daily, just in smaller amounts.

Plus, unlike many “all-natural” pre-workout drinks on the market, Alani Nu doesn’t feel compelled to include some not-so-all-natural craps such as artificial flavors and dyes. Thanks Alani, your integrity is intact. 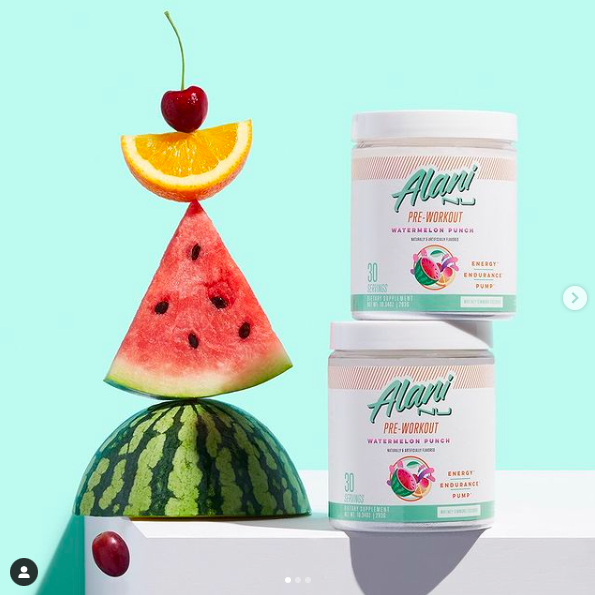 Not only is L-citrulline a vasodilator that can lower your blood pressure while increasing your exercise capacity, but it also helps rid your body of harmful compounds like ammonia.

This means it helps both during your workout as your heart is able to deliver more oxygenated blood throughout your body with less effort, as well as with recovery by flushing away toxins that may otherwise get in the way of a speedy recovery.

Up next is beta-alanine, which helps produce carnosine in your system. Since carnosine keeps lactic acid from accumulating in your muscles, you get a higher lactic threshold and less of the burning limits that may otherwise keep you from completing just one more rep.

This is also great for other athletes such as runners, cyclists, and swimmers wanting to cross the finish line ahead of the rest, which a sky-high lactic threshold can help you achieve.

L-tyrosine helps your body produce adrenalin, thyroid hormones, and dopamine, all of which can help you hit new levels of oomph in the gym. This also helps increase your metabolism for increased fat burn since that’s what thyroid hormones can do. There’s also the focus and sense of accomplishment that dopamine can deliver—not to mention its positive relationship with many androgens.

And of course, adrenalin is there to energize and focus you to take your workout to the next level.

And of course, whenever we need energy on the cheap, there’s good old caffeine. Frankly, and even though Alani Nu avoids putting every barely-legal speedy compound known to man in their formula, we’d still like to see stimulants omitted, especially caffeine.

That’s because we like our morning cup of coffee and don’t want to have to skip it to avoid the side effects of too much caffeine. Yes, the formula does balance things out with L-theanine, which we’ll get to in a bit, though this doesn’t mean that those of us sensitive to caffeine can sleep tonight should we go that one toke over the line.

And a good night’s sleep is important, since that’s one of your most effective recovery tools!

If you’re consuming large amounts of caffeine, L-theanine is your best friend. In fact, it pairs up so nicely with caffeine that once you discover its calming, soothing-yet-focusing effects, you may just want to switch to green tea, which is a rich source of it.

But for this purpose, L-theanine keeps caffeine from sending you over the edge in a twitchy, irritable mess. Instead, it helps you lock into a wonderfully focused, confident state that makes decision-making easy, and working out even easier.

To be honest, there’s nothing super unique about this formula, and that’s probably because its ingredients have been proven time and again to be effective for the purpose. The formula can successfully get you hopped up for the gym, where it’ll also help you work out like the Tasmanian Devil. 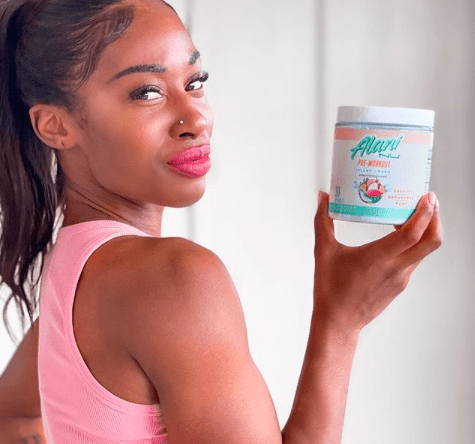 Plus, unlike pre-workout formulas that are crammed full of every stimulant known to man, Pre-Workout allows you to enjoy a sense of calm, focused satisfaction when you’re done.

And as we all know, there’s nothing as enjoyable as a head full of post-workout hormones just to make the world a nice place.

Who is Alani Nu Pre-Workout Best For?

You don’t need to be a gym rat to enjoy the energizing athletic boost of Pre-Workout, since endurance and field athletes can also benefit from the elevated lactic threshold and supply of stimulating hormones this product delivers. Since it contains compounds that are already naturally occurring in you along with the active ingredient from the world’s most popular beverage, there’s virtually no chance of this product causing a negative urine sample on race day.

Plus, the combination of caffeine and L-theanine can be your best friend on days when the deadlines are piling in an adverse relation to how much time you have for them. Boss is yodeling demands at you like a foghorn? This compound can ease the stress and help you keep up with the demands of work, school, and everywhere else there’s stress.

With plenty of science to show that each ingredient works as promised, Alani Nu stays true to what they say. The product performs as they say it will, and just in case it doesn’t for you, you can return it within 30-days for store credit on another item. 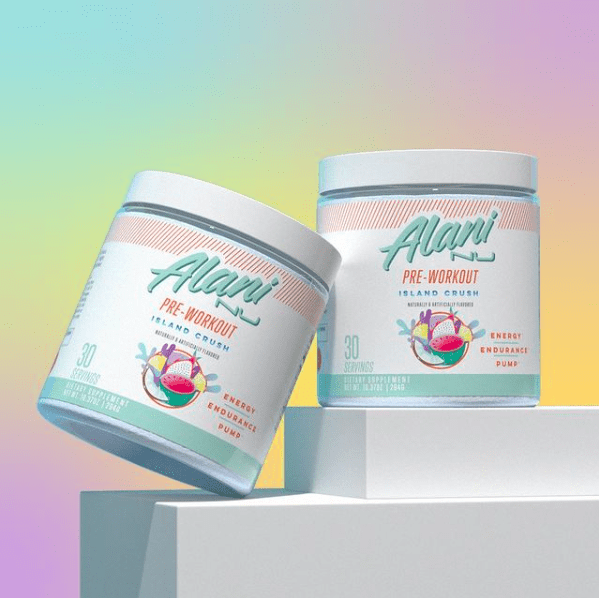 As with most workout supplements that may affect your hormone production, Pre-Workout should not be used by youngsters under the age of 18. There’s also the usual concern over pregnant or nursing women using it without first checking with their doctor, and likewise for those with health conditions or who are on medication.

Other than that, the product contains mostly ingredients that you likely already use, or that your body already produces, so there are few safety or side-effect concerns.

But, if you are allergic or sensitive to any of the product’s ingredients, you can always return it within 30-days for store credit.

Where to Buy Alani Nu Pre-Workout

Alani Nu Pre-Workout is available for purchase from the official Alani Nu website. 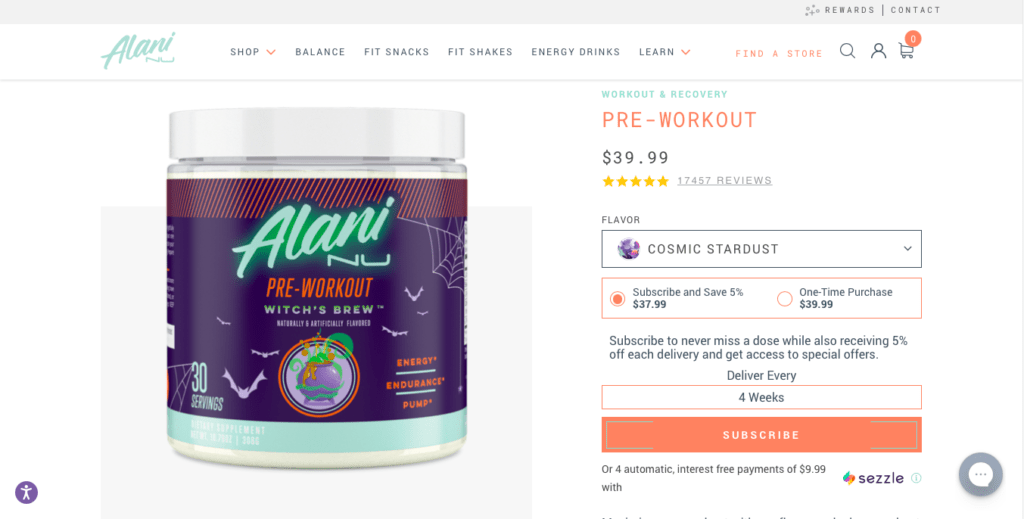 At $39.99 for about a month’s worth, this product falls on the slightly high end of the price range.

But you can save an additional 5% when you sign up for auto-ship, and the product is clean and free of artificial crap, which we suppose is worth a little extra. Frankly, we’d rather have both a great price AND clean ingredients, but hey, it’s been reported that those in hell also want ice water.

Along with Alani Nu’s website and stores, Alani Nu Pre-Workout is widely available through such retailers as GNC, Walmart, Amazon, and likely at least a few independent online and brick-and-mortar stores.

MassZymes Review – Is This Supplement Effective?

PrebioThrive Review – Is This Prebiotic Supplement Worth the Money?

Animal Test Review – Is This Testosterone Booster Worth It?

Prevagen Review – Everything You Need To Know About This Brain Supplement

Lovita NMN Supplements Review – Is This Supplement Worth It?