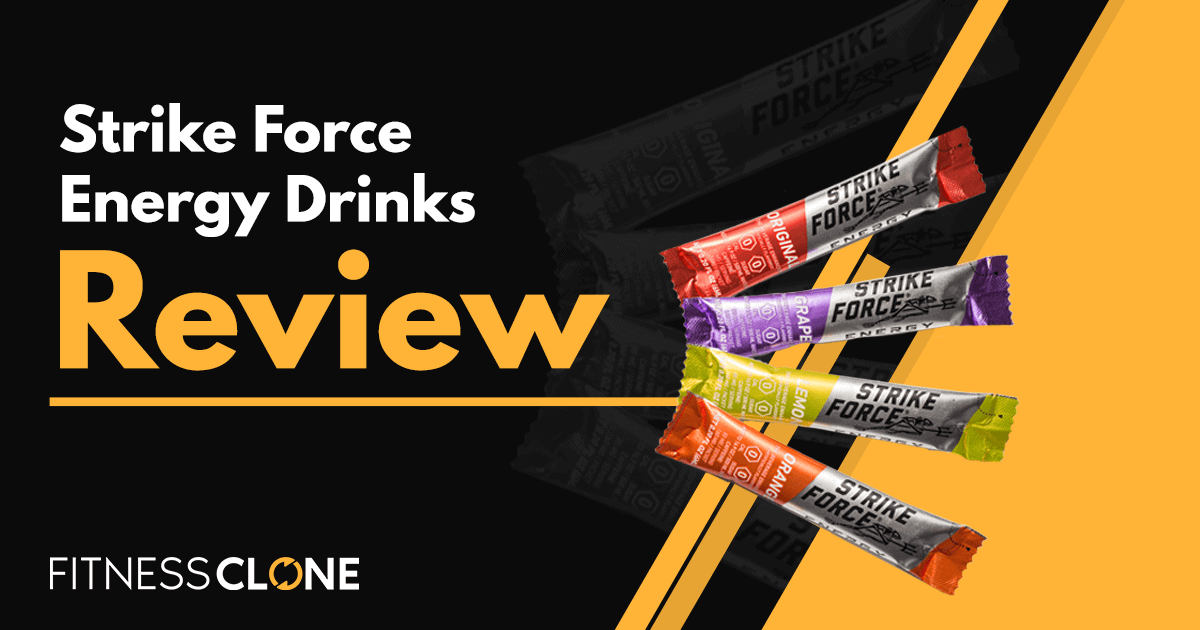 Energy drinks are really popular at the moment. Brands like Monster and Red Bull have made a killing marketing their drinks to a high-octane demographic, including athletes, adrenaline junkies, gamers, and more.

One big problem with a lot of these drinks, though, is that they are loaded with sugars. For example, a single 12 oz. Red Bull has almost 37g of sugar, which is more than the daily recommended amount of sugar for both men and women. So many people are dying to have an energy drink substitute that is not loaded with sugars.

So we are going to cover Strike Force Energy in this review and talk about its pros, cons, and whether or not its worth the purchase.

What Is Strike Force Energy?

Strike Force Energy is a line of concentrated energy drink packets. Each packet can create 16 oz. of energy-packed liquid that can be consumed on the go in any situation. Strike Force is marketed as a convenient method of energy drink.

Unlike many other energy drinks, Strike Force has 0 calories and 0 sugars. It’s made from natural ingredients and has caffeine and vitamin B12 as its main stimulant ingredients. Each serving comes in a pouch. Simply open the pouch, empty the contents into a glass of water, and Voila! You have a concentrated source of liquid energy. Strike force also won’t clump the bottom or create small crystals like a lot of drink mixtures do.

Strike Force comes in a wide variety of flavors, including lemon, orange, grape, and cherry. You can buy single pouches or large supplies of the mixture for daily drinking. Each packet is clearly color-coded, so you know exactly which flavor you are getting.

Strike Force Energy is made by Strike Force, a US-based company that was founded by inventor Bruce Schlee and former Navy SEAL Sean Matson. Schlee was inspired to make Strike Force as a means to supply troops with energy drinks, so he teamed up with Matson to get some military expertise and work on the product.

Aside from its flagship energy drinks, Strike Force offers apparel and gear, such as t-shirts, workout attire, mixing bottles, and protein mixers. They also recently launched a new line of meal replacement/protein bars. Strike Force works with several military organizations and donates a significant number of their products to active duty soldiers. Strike Force also has an affiliate program that you can sign up for and get discounts and referrals.

We could not find a BBB page for the company or a Trustpilot page. However, the majority of reviews on the product page were extremely positive. Most people say that the company is responsible with their shipping practices, and we couldn’t find any reviews talking about bogus charges on accounts.

How Does Strike Force Work?

Strike Force is simple: Just open the packet, empty the mix into some water, and you can start drinking almost immediately. What’s that you say? You have to wait until the mixture dissolves? Actually no! Strike Force packets actually contain a liquid concentrate, not a granular one like a lot of other brands. So you don’t have to wait for anything to dissolve, and it won’t create clumps of powder. Schlee states that the liquid-in-a-pouch design was inspired by a ketchup packet he was randomly using one day.

Strike Force is an energy drink and contains caffeine and B12, both of which are known to act like stimulants. As such, it may not be a good idea for people that are very sensitive to caffeine. However, most people from reviews claim that the energy drink works great and, moreover, tastes good. The original flavor tastes a bit like Red Bull and is just a clear liquid. The other flair packets have a fruity flavor and scent. But, we noticed that the lemon flavor gets a lot of hate. Oh well, can’t win them all, we guess.

Strike Force Energy contains relatively few ingredients. It has 0 grams of sugar, 0 carbohydrates, and 0 grams of protein. It also only has 2 mg of sodium. Strike Force does content 100% of your daily value of Niacin, Vitamin B6, and B12. As we stated earlier, B12 is a common additive in energy drinks and helps your body metabolize things for energy.

Each flavor of Strike Force also contains caffeine. Each packet contains about 160mg of caffeine. Each pack is supposed to be 2 servings, but most people say that they just drink an entire pack in one go. 160mg of caffeine may be on the high end for those sensitive to caffeine. If that’s the case for you, you can split up the packets or consider looking into a lower caffeine energy booster like Mud WTR or Gundry MD Energy Renew.

Where To Buy Strike Force Energy

You can buy Strike Force directly from the company’s website or from a third-party retailer like Amazon. You can also find Strike Force in select physical stores which you can look up on the website. A 10-count package of Strike Force costs $12.99. 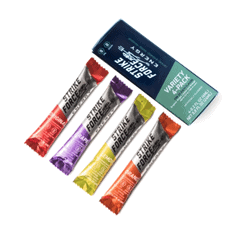 Final Verdict: Is Strike Force Energy Worth It Or Not?

Overall Rating: 3.75 out of 5
Categorized in: Energy Supplement Reviews, Reviews