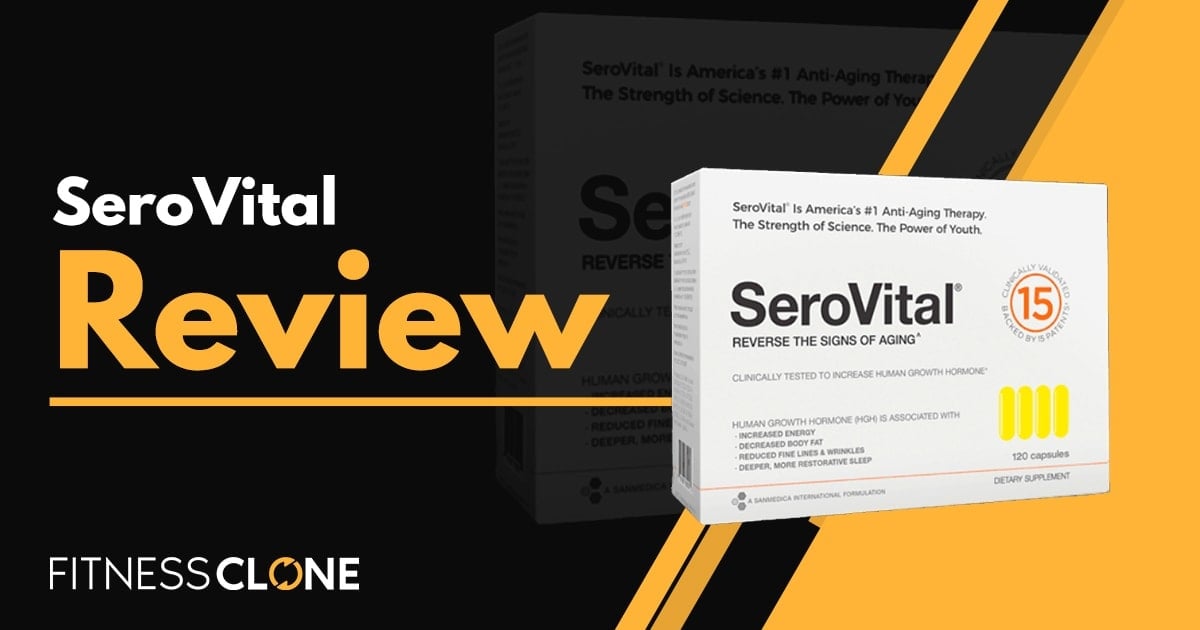 Serovital is a nutritional supplement formulated, marketed, and sold by SanMedica International LLC. SanMedica is a based out of Salt Lake City, Utah and SeroVital has been on the market since 2014. SeroVital is supposed to be able to boost human growth hormone (hGH). As a result of boosting hGH they claim SeroVital can help with a variety of age related issues. In order to boost hGH, SeroVital employs a proprietary blend of amino acids and a traditional Chinese herbal medicine extract.

It is well accepted that hGH is involved in the maintenance of tissue. As a result restoring hGH levels to normal/youthful levels can help reduce wrinkles.

One of the major effects of hGH is to promote lean muscle mass and reduce body fat. Low hGH levels are commonly associated with increased body fat.

This claim is up for debate no matter how you slice it. We produce the highest amount of hGH when we are sleeping. However, boosting hGH does not appear to improve sleep. There is some evidence that hGH replacement therapy may actually decrease sleep time and quality.

Energy production in our body is a highly regulated process that involves several inputs. hGH actually helps to boost the production of energy by increasing ATP product. As a result people that have normal hGH levels have better energy/stamina than those with low levels of hGH.

hGH is involved with regulating more than just muscle and fat tissue. Reducing wrinkles and tightening skin are essentially the same benefit. Regardless, hGH helps to maintain collagen that supports health joints and skin.

There is significant research into the effects of hGH on a variety of topics. Some evidence suggests that hGH deficiencies are associated with significant issues with cognition. Researchers assert that by restoring normal levels of hGH can have dramatic effects.

SeroVital uses a proprietary blend of amino acids and a Schizonepeta that totals 2.9g per 4 capsules. The company claims they have linked these amino acids together in a unique sequence that is responsible for the products benefits. The SeroVital website also routinely refers to their 4 clinical studies that supports their claims. A quick google search shows that most of their studies are related to patent applications. There was one clinical study involving 16 healthy individuals that was available on PubMed.gov.

L-lysine is a very common amino acid. It is found in a variety of foods, both plants and animals. There have been a few studies that have shown lysine, in combination with other amino acids, are capable of increasing growth hormone secretion. Most of these studies tend to asses intravenous (IV) delivery of these amino acids however. Researchers did not recommend the use of these amino acids to boost hGH secretion in the end.

Arginine is another common amino acid associated with boosting hGH production and secretion. Similar to lysine, there have been several studies looking at the effects of arginine on hGH. One review of studies found that hGH may increase when people supplement 5-9 g of arginine. One of the interesting findings of this review was arginine supplementation on average spike growth hormone as much as 100%. Exercise, on the other hand, consistently produced a boost in hGH by 300-500%.

A search of the U.S. National Library of Medicine, PubMed.gov returned zero studies for “proline supplementation and [hGH].” There doesn’t appear to be any direct connection between the supplementation of proline to help boost hGH. Proline supplementation is however well documented for use in wound healing and skin health. It seems that proline is essential for collagen synthesis. As a result this may explain its inclusion into SeroVital.

N-acetyl L-cysteine (NAC) is one of the most popular amino acids, outside of the bodybuilding world. This amino acid helps to support energy production and reduce inflammation. It is capable of doing this because it is the limiting factor involved in creating glutathione. There doesn’t appear to be any evidence on NAC’s role in hGH production or secretion.

Glutamine is probably the most widely used amino acid supplement. It is key to rebuilding muscle after strenuous exercise. One of the ways glutamine may help to improve the rebuilding of muscle may be related to its effects on hGH. Glutamine has been shown to boost serum levels of hGH. In order to see this effect though, subjects needed to consume 2 grams of glutamine.

Schizonepeta is an herb that has traditionally been used in oriental medicine. It is widely used for its immunomodulatory and anti-inflammatory effects. Some studies have shown that the immune & anti-inflammatory benefits of schizonepeta can help to subdue skin issues like dermatitis, exzema, and psoriasis. It does not appear to have any direct impact on hGH. The average dose for Schizonepeta ranges from 2.5-9g for people 150-250lbs.

It is highly unlikely this product produces any significant effects. The claims SeroVital makes stem from their 4 clinical studies. The one study that was on PubMed.gov specifically looks at the effects of SeroVital supplementation on hGH production. This study did not show that SeroVital will reduce wrnkles, reduce body fat, improve sleep, increase energy, tighten skin, or improve focus. All that it showed was SeroVital could boost hGH, and that boost was not as big as they make it seem. The claims SeroVital makes a broad extrapolation. This can be misleading. Essentially, SeroVital is saying, if SeroVital boosts hGH, and hGH helps with skin, energy, sleep, etc., then SeroVital helps with all of those issues as well. This is not the most accurate interpretation of this information.

In order to get a true understanding of the product and its claims, it is important to understand the studies the rely on to make their claims. As mentioned above, it does not appear their study looks at the effects of SeroVital, on skin health or sleep for example, but rather extrapolates its effects on hGH. Additionally, men and women were included together in this study. The normal levels of hGH seen in men 18 and up may be anywhere from 0.01-2.47 ng/mL. The normal range for women 18 and up is 0.13-9.88ng/mL. That is a huge difference. And for reference, hGH levels appeared to only peak at 1.13 ng/mL.

So how do they get to the claim of a 682% boost in hGH from baseline? Well to fully explain that is beyond the purview of this review. But, it boils down to complex manipulation of the numbers with math. They weren’t simply looking at the hGH levels at the start and peak hGH levels following supplementation. They used a statistical technique that calculated something called Area Under the Curve (AUC). This may be misleading to the lay person because a small change in numbers from start to finish can produce huge AUC. Think of this like calculating the area of a rectangle. Something that is 4 inches long and 3 inches wide would have an area of 12 inches. By increasing the width by 1 inch so we have a square that is 4 inches by 4 inches results in an area that is 16 inches. This small change produced a big difference in the area.

Another thing to take into consideration is ingredient dosage. Based on all of the data, every amino acid is dosed significantly lower than any other study has found. The study using SeroVital also tested this on patients that had completed an overnight fast. Its reasonable to consider that if subjects had simply eaten a small amount of protein rather than take SeroVital, the hGH spike would have been comparable.

There doesn’t appear to be any negative side-effects associated with this product or its ingredients.

Where to Buy SeroVital + Price

SeroVital is for sale at many retailers and online.

Overall Rating: 1.35 out of 5
Categorized in: Anti-Aging Supplement Reviews, Reviews