Phen24 Review – What Can It Do For Your Metabolism? 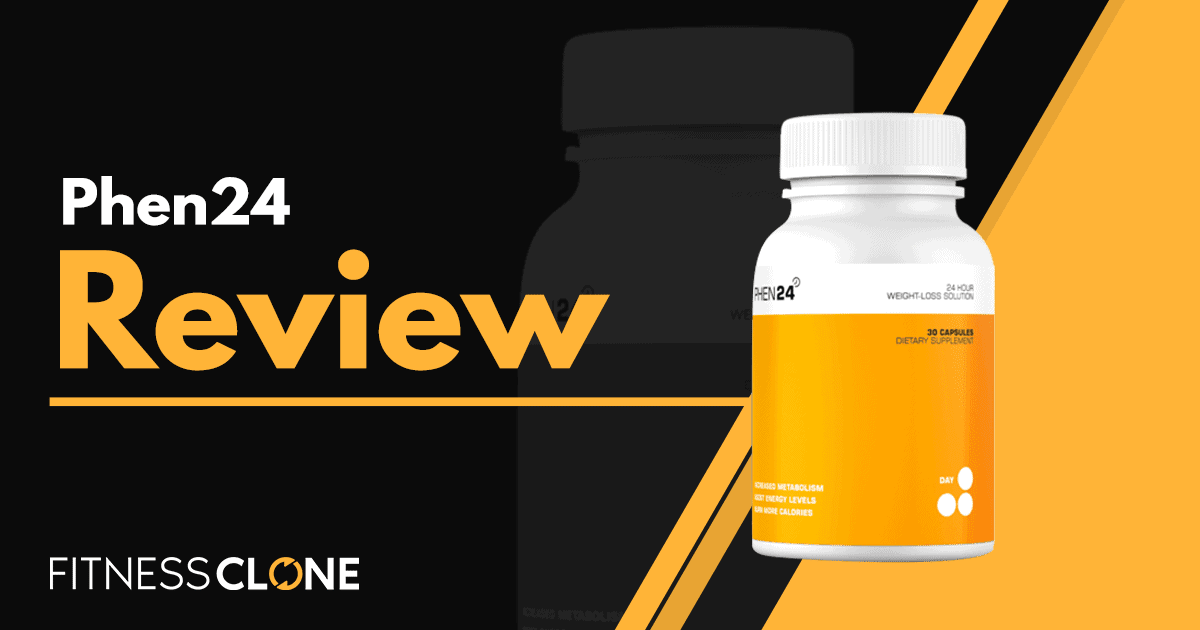 Certified herbalist, nutritionist, naturopath, and creator of Phen24 Angela MacRitchie gets that metabolisms are tricky and that no two are the same. That’s probably the reason you may be experiencing the frustration of doing everything right—as in, eating right, exercising, and getting enough sleep—only to see the pounds still there and possibly even increasing. Sure, these steps work for most, but why not you?

The formula MacRitchie has created heightens the thermogenic process for that extra boost you need to get rid of those pesky pounds. It works with both your daytime and nighttime metabolisms so that yours is working at its peak performance even when you sleep.

Let’s have a look and see what we think in this review of Phen24! 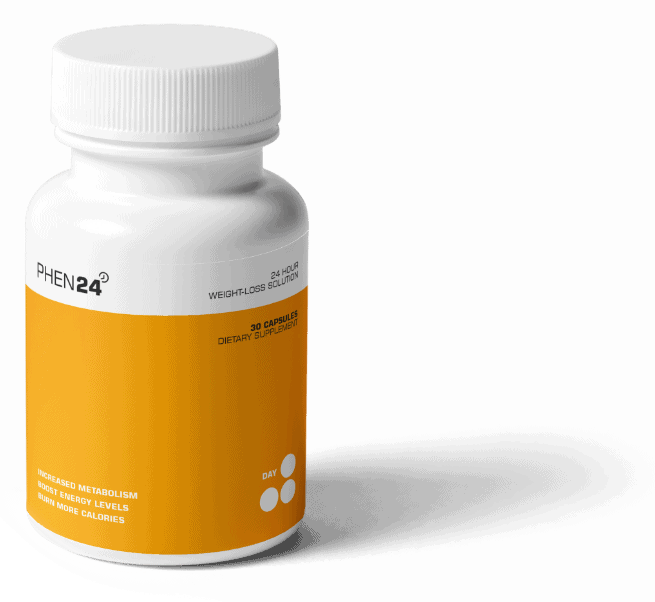 Throughout your day, it’s likely you’re experiencing different levels of stress—none of which are doing your metabolism any good. That’s because stress increases certain hormones in your system, which elevate blood sugar and give you the energy to either fight or flee.

The problem is, you likely aren’t able to jump up and expend this energy, which is compounded by continuous influxes of even more stress hormones throughout your day. This affects your sleep, and likewise, your sleep affects your girth—and typically not in a good way.

But Phen24 combines minerals, plant compounds, and amino acids that work with your circadian rhythms to strengthen your resting metabolism. It comes in both a nighttime version that’s stimulant-free, and a daytime version that contains natural caffeine.

They claim it boosts fat burn even without long hours in the gym, and back it with a generous 60-day, 100% money-back guarantee. 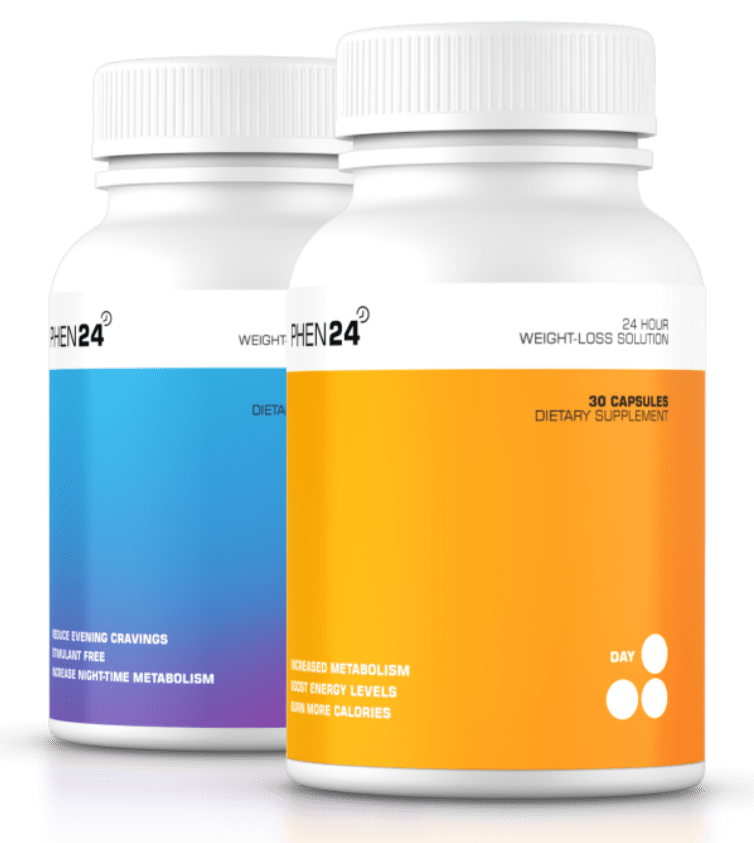 Why use a health supplement if it contains pesticides or other harmful residues? With Phen24, they claim to use only cleanly harvested ingredients—though without any proof or certifications noted, this is something they seem to expect you to simply take their word for.

Unfortunately, this goes along with a few other issues of transparency (or lack thereof) on their website.

While Phen24 lacks transparency in some areas, they do include links to studies backing 6-of the product’s ingredients.

While we’re not sure why they don’t produce evidence of ALL 8-ingredients, a simple online search will bring up plenty of studies backing most of what’s in Phen24. So far as all this “hyper-testing” they do, we’ll just have to assume it’s as thorough as the ingredients are clean…

As previously mentioned, stress hormones cause your system to prepare for rapid energy release. This entails loading up your blood with glucose, which produces energy much more quickly than does fat. This not only causes your body to forego the burning of fat, but it also creates cravings for sugary, salty, high-calorie foods—especially late at night when their comfort helps you forget your stressful day.

But Phen24 is designed to work with your adrenals and balance them, so they aren’t constantly loading your bloodstream with “flight-fuel.” This also relieves you of the very cravings that are making you feel good briefly during your late-night noshing, only to make you feel horrid when you look in the mirror the next day.

Works With Your Circadian Rhythm

Another factor that controls your body’s hormone balance is your circadian rhythm, which induces (or is supposed to induce) sleep hormones at night, and energizing hormones in the morning.

Unfortunately, another symptom of too much stress is an overload of cortisol, which keeps you up at night and tempts you to put away that last slice of pie in the fridge to go along with that bag of chips, box of cookies, and half pizza you had as a post-dinner snack.

But Phen24 is designed to help your body return to its normal, healthy state so that when it’s time for bed, you get the sleep hormones you need to fall asleep, stay asleep, and wake up refreshed, lean, and ready to go in the morning.

Zinc is a mineral that’s essential to a healthy immune system, and it also plays a role in blocking insulin-signaling receptors in the pancreas. This, along with its ability to help reduce your body’s oxidative stress, helps zinc reduce your insulin output so that your body burns more fat with lower blood sugar. This is not only important for weight loss but in reducing your risk for type II diabetes and other chronic diseases related to it.

Magnesium is another essential mineral with many benefits, including helping lower your blood sugar and allowing your muscles to relax. In fact, it’s commonly referred to as “nature’s muscle relaxer” since it counters calcium’s ability to contract your muscles and allows them to release. This helps you relax more easily before bed and stay asleep throughout the night.

Unfortunately, we can’t speak to the dosage of this or any of Phen24’s other ingredients, since that’s not something they’re willing to disclose on their website. All attempts to chat with them resulted in little more than questions asked, lots of waiting, and no response, so good luck if you’re like us and want questions answered before forking over your hard-earned bucks.

That’s because it acts as a regulator that’s essential in metabolizing fat cells to be used as energy, with studies indicating that the more copper in your system, the more fat is broken down.

Though it is estimated that the typical adult needs around 700 mcg per-day of copper for optimum health, around 75% of the US population is deficient in it. Unfortunately, we can’t tell you to what level Phen24 will alleviate this, though let’s hope there’s enough to justify the product’s high cost!

Your thyroid is a small gland in the back of your throat that needs iodine to work well—especially when it comes to controlling your resting metabolism.

That’s because it’s essential in producing thyroid hormones that tell your metabolism to MOVE IT and burn more energy. Without enough iodine, you end up with fatigue, low energy, poor brain function, and, yes, you guessed it, weight gain.

While there are weight loss supplements out there that don’t include caffeine, such as TriTrim from Gundry MD, Phen24 makes sure to include a solid amount in their daytime formula. Caffeine speeds you up so that you burn more fat, and it also gives you the energy to hit the gym or running trail—though Phen24 claims you don’t need long hours of exercise to be completely effective.

Remember, though, to truly do things right, you need to complete the formula that is: lower your stress response + eat right + sleep enough + get enough exercise = you now have a lean new beach bod.

Keep in mind, too that caffeine induces the release of fight-or-flight hormones like epinephrine and norepinephrine, meaning it’s a good idea to limit your consumption of it, especially later in the day. That’s why Phen24 apparently makes an evening formula that’s caffeine-free, though they expect you to buy the product to find out what’s in it since nothing is listed on their website!

To further increase the caffeine in their product, Phen24 adds guarana, which is a type of tropical plant with berries that are similar in makeup and appearance to those of coffee. Along with caffeine, they contain theophylline and theobromine, and have potent antioxidants to help your body metabolize fat and reduce oxidative stress—the latter of which is a known cause of obesity.

In fact, not only does inflammation lead to obesity, but obesity leads to inflammation, meaning reducing one helps reduce the other.

Amino acids play many roles in your body, including phenylalanine, which energizes you and boosts fat oxidation.

Granted, studies indicate that phenylalanine helps burn fat only when combined with exercise, so don’t expect this—or any supplement—to allow you to torch the pounds while enjoying Twinkies on the couch.

Another component of many weight loss supplements is chili powder, which contains capsaicin—the substance which gives peppers their heat. Not only does it make vindaloo addicting (well, for some of us anyway), it also revs up your metabolism, reduces your appetite, and helps you burn fat.

That’s because capsaicin is known as a “thermogenic chemical,” in that it increases your metabolic rate.

Of course, not everyone is cut out for 5-alarm chili or habanero-eating contests, and those who aren’t will be happy to know that by using this supplement, they can enjoy the benefits of cayenne peppers without experiencing the dreaded “ring of fire.”

Just as so many other similar weight loss supplements do, Phen24 has its benefits. It will energize you, and they claim to have a stimulant-free nighttime formula to go along with their daytime formula, which contains caffeine along with more caffeine. We’re not sure if both contain phenylalanine, though let’s hope not since it also has energizing properties that could potentially keep you up at night. 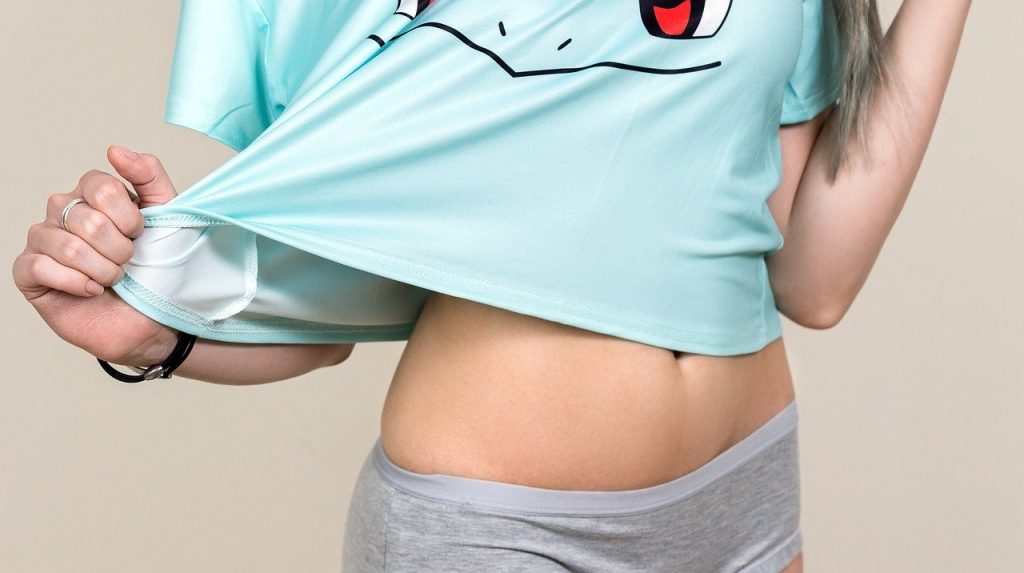 Who Is It Best For?

Those over the age of 18 who aren’t sensitive to caffeine or any of Phen24’s other ingredients will find this product to be a beneficial complement to their healthy lifestyle. It contains mostly ingredients that are either essential to your health, or common in many diets.

But those who “are pregnant or nursing, under the age of 18, those with depression or who are taking anti-depressants, diabetics, those with endocrine or autoimmune disorders, those with prostate cancer or hypertrophy, those with liver or kidney disease, or those with breast cancer or testicular cancer” should not use this product. 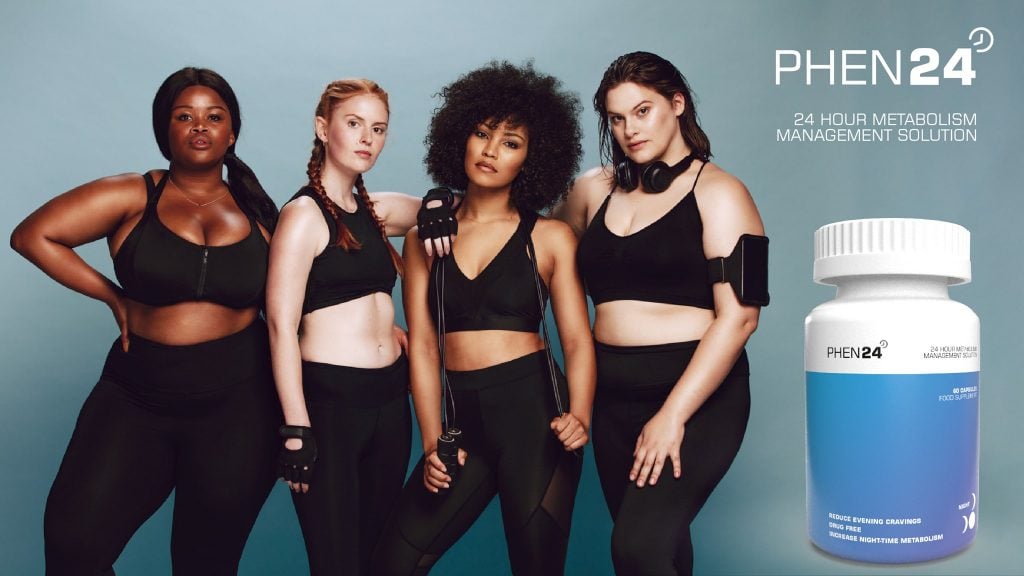 Though Phen24 isn’t willing to disclose just how much of each ingredient they include in their formula, they at least back what’s in it with science.

That, and since there’s nothing genuinely unique about this formula, if one manufacturer’s version works, so will others.

Overall, this product, along with a healthy eating plan, enough sleep, hydration, and exercise, may be just the extra push you need for relief of those pesky pounds you otherwise just can’t seem to get rid of.

Though most of the ingredients in this product can be found in the foods you eat, it does contain stimulants in the form of caffeine and phenylalanine. Though the latter works with your body and is virtually free of jitters, it can keep you up at night and produce that ‘why isn’t everyone around me moving fast enough??!!’ effect.

Caffeine, on the other hand, can induce jitters, ill-temper, and scattered brain function, especially to those sensitive to it. In fact, even if you’re not typically sensitive to caffeine, it’s still in your best interest to monitor your other sources of caffeine when using this product, since not doing so can tip you over the edge and negate the positive effects of Phen24’s otherwise good performance.

Other than that, the only side effects you’re likely to experience are reduced symptoms of stress, better sleep, weight loss, and a lighter wallet. 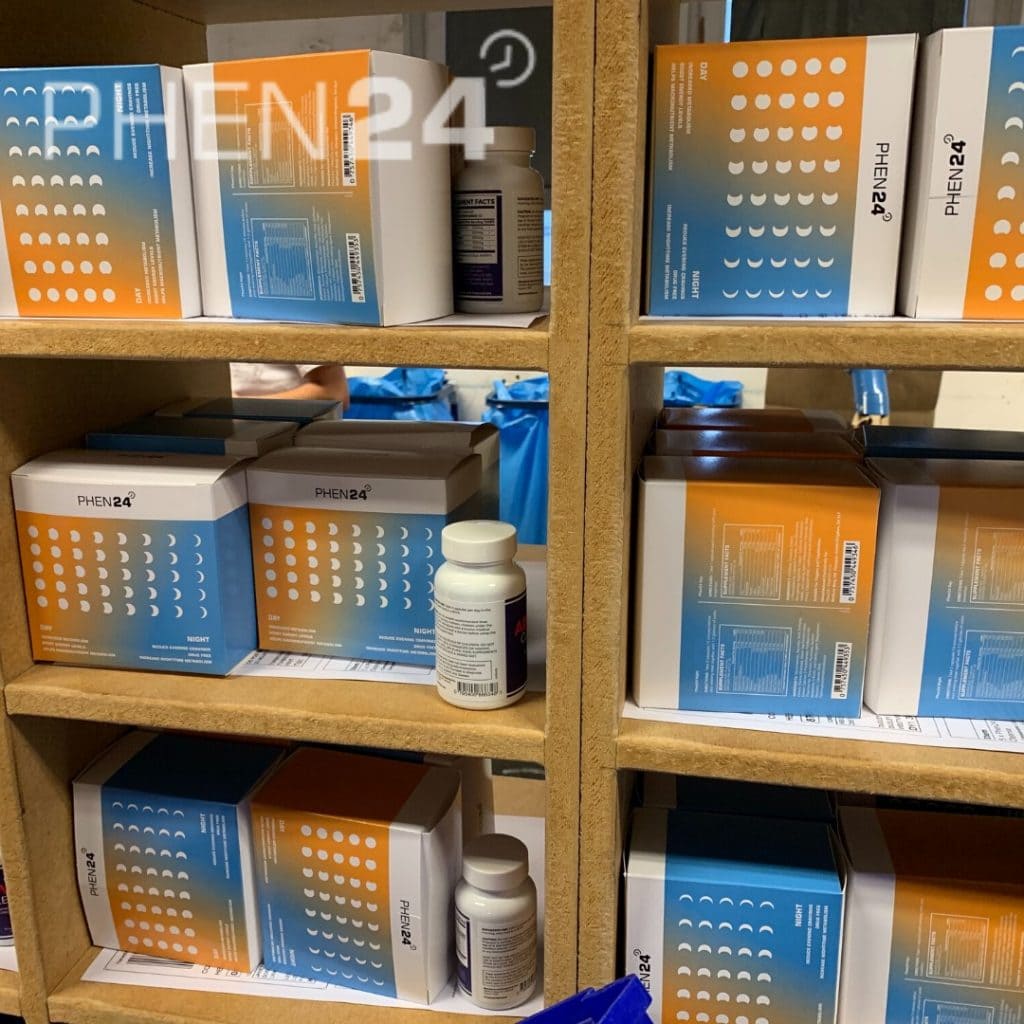 Where To Buy Phen24

Okay, at nearly $80 for a month’s supply, this stuff ain’t cheap, and you may need to forgo that ivory back-scratcher you’ve been eyeballing to afford it.

But they do offer volume discounts, including buy-2-and-get-1-free and buy-3-and-get-2-free options, and shipping is free on all orders (or at least, it’s included in the exorbitant price).

Though the product may be available on Amazon, E Bay, and other sites, Phen24 discourages you from buying through them due to the potential for counterfeit and only recommends purchases made on their own site.

Unbloat Review – Is This Gut Health Supplement Worth Using?