KetoSports Keto8 Review – Do You Need This Supplement? 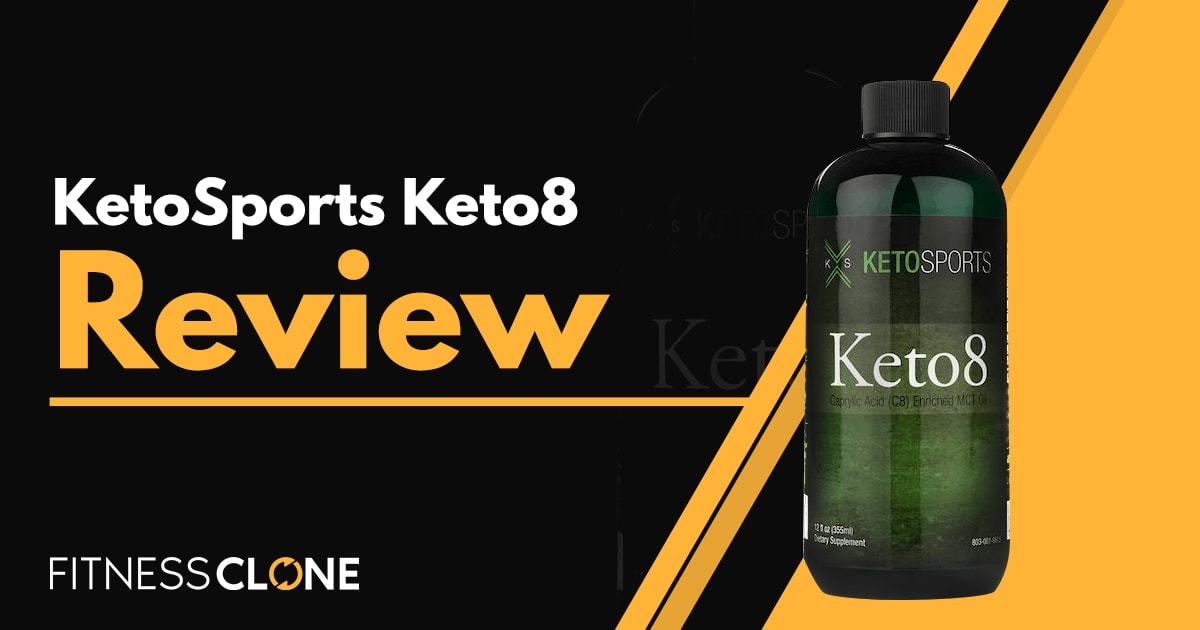 The ketogenic diet, or keto diet, is one of the most popular diets in the world these days. With the ketogenic diet, you eliminate almost all carbohydrates from your diet. Instead, you get 99 percent of your calories from fat and protein. The idea is that by training your body to burn fat, you’re going to shed fat faster than you would with calorie restriction alone.

As you can imagine, the keto diet involves a lot of changes to your diet. You can forget about even healthy carbs like beans, legumes, and whole grains. Instead, you’ll be eating salad with olive oil and salmon, or chicken served up with gobs of cheese.

The most challenging part of the keto diet isn’t eliminating carbs; it’s getting enough fat. This is where KetoSports Keto8 comes in. It’s a bottle of MCT oil: pure, healthy fat that your body will really appreciate. Here, we’ll talk about what MCT oil is, what it does, and how it can help you with your keto diet.

Overview: What is KetoSports Keto8?

KetoSports Keto8 is a bottle of 100 percent pure C8 MCT oil. That’s literally all it is. This is a mostly-odorless, mostly-tasteless oil that’s much healthier than most other oils. It’s designed to be mixed into smoothies and shakes, used in a bulletproof coffee, or even used in cooking.

Keto8 comes in a 12-ounce bottle, which is smaller than some MCT oils on the market. However, the bottle is well designed, with dark green plastic. This ensures that the oil won’t go bad when it’s exposed to light and sitting on your shelf.

Keto8 is manufactured by KetoSports, a US-based company that was founded in 2012. They were on the bleeding edge of the keto revolution when they released their first product, KetoForce. KetoForce was the first exogenous ketone supplement to be marketed to the general public, and it quickly became very popular. KetoSports has since expanded their line to include a variety of other ketogenic products. These include a glucose blocker, which helps prevent your intestines from absorbing glucose, as well as electrolyte and MCT supplements.

KetoSports Keto8 contains one ingredient: C8 MCT oil, the same oil found in MCT supplements like Gundry MD MCT Wellness. MCT stands for “medium-chain triglyceride”, meaning that the individual molecules consist of moderately-sized carbon chains. In general, the shorter the carbon chain, the easier the oil is to digest, and the less likely it is to cause health problems like arterial plaque.

The 8 in C8 refers to the number of carbon atoms in each molecule. In other words, C8 is a triglyceride oil with 8 carbon atoms and some hydrogen and oxygen atoms. There are also C10 and C12 MCT oils, but they can be harder to digest. Indeed, some dieticians argue that C12 oil is too long to be considered a true MCT. Since C8 is such a small atom, it’s very easy for your body to break down.

How Does KetoSports Keto8 Work?

When you’re on the ketogenic diet, your body requires significant amounts of fat. Depending on who you ask, it needs to be getting anywhere from 65 to 75 percent of its total calories from fat, with the remainder coming in the form of protein. Now, a lot of this fat can come from eating lots of cheese or drinking heavy cream in your coffee. But if you’re going to get enough protein for your body’s needs, you need a lot of fat. On a 2,000-calorie diet, you need anywhere from 1,300 to 1,500 fat calories. That’s a lot of fat!

Keto8 is designed to help you reach that target. Because it’s relatively healthy and easy to digest, you won’t face the same serious health risks you would if you supplemented with, for example, vegetable oil. It can be used in a variety of recipes, including smoothies and shakes.

Keto8 MCT oil is safer than most oils, because C8 MCT is easy to digest. Because the triglyceride chain is so short, it also won’t clog your arteries to the extent that other, longer-chain fats will. The only major side effect is diarrhea, particularly when you’re just starting out. To avoid this, try starting your diet with smaller amounts of MCT oil and working your way up as your body acclimates.

Keto8 is available on KetoSports’ website at a cost of $19.95 for a 12-ounce bottle. This is right in line with the average market price for C8 MCT oil. It’s also available on Amazon, but prices there tend to be higher.

KetoSports Keto8: Is it Worth it?

If you’re a keto dieter, MCT oil is virtually indispensable. Since Keto8 is priced competitively in today’s market, it’s well worth the investment. It’s also a good choice if you’re concerned about your arterial health. That said, if you’re not a keto dieter and you’re relatively healthy, you’d be better served using coconut oil or olive oil for your cooking, since those are almost as healthy and much more reasonably priced.

LOVIDIA Review – An In-Depth Look At Their Hunger Control Supplement

TruBrain Review – How Good Are These Nootropics?

Opove M3 Pro Review – How Does This Massage Gun Compare?

obé Fitness Review – Is This Fitness App Worth Downloading?

Vitamin Energy Review – How Do These Supplements Measure Up?

Epivar Review – Is This Anabolic Warfare Supplement A Healthy Choice?