Awakened Labz Keto Boost Review – Will This Speed Up Ketosis? 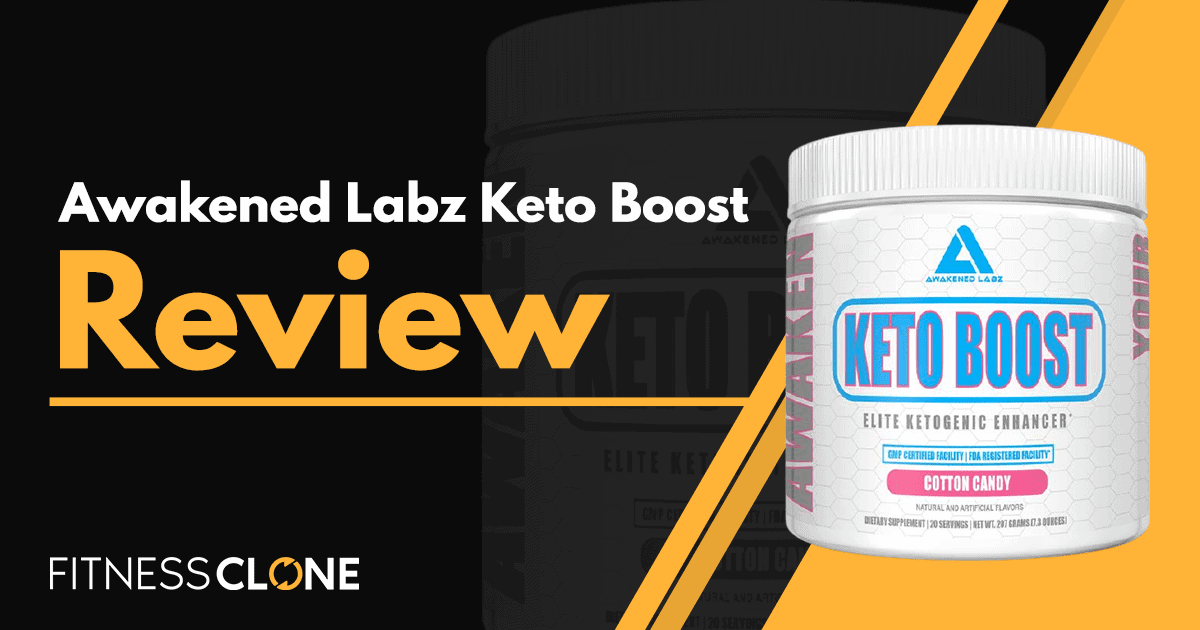 Ketogenic, ketosis, keto…have you heard any of those words being thrown around lately? I’m betting you have since the ketogenic diet has been all the rage in recent years. In the ketogenic diet, one switches from relying on carbohydrates, and thus glucose, for energy, and instead, the individual gets their energy from ketone bodies in a state called ketosis.

Claims are being made that the ketosis state can accelerate fat loss, improve cognitive and physical performance, and many other things. Now, to achieve this state, it usually requires drastically reducing carbohydrate intake and increasing fatty acid intake. This state can also be achieved through fasting (ketone bodies even increase slightly while sleeping). However, certain supplements are coming out on the market claiming to put individuals into ketosis, usually much more rapidly. One such product claiming to help you get into ketosis is Awakened Labz Keto Boost. 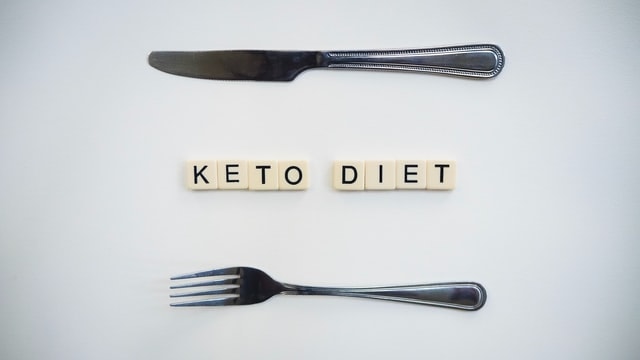 Awakened Labz Keto Boost, using their words, is an “elite ketogenic enhancer.” Often, on the Ketogenic diet, it takes quite a bit of time to reach ketosis and usually takes a lot of effort and mental fortitude to stick with a regimen that keeps one in constant ketosis. But Keto Boost claims to be able to get you into ketosis much easier and more rapidly, even without going on a ketogenic diet.

Awakened Labz claims that Keto Boost is able to increase ketone levels in the body in as little as 15 minutes. This sounds fantastic, but to what degree, if any, are these claims true? To answer this question, we will take a deeper dive into the specific ingredients, and other aspects underlying Keto Boost and see if the claims hold water. 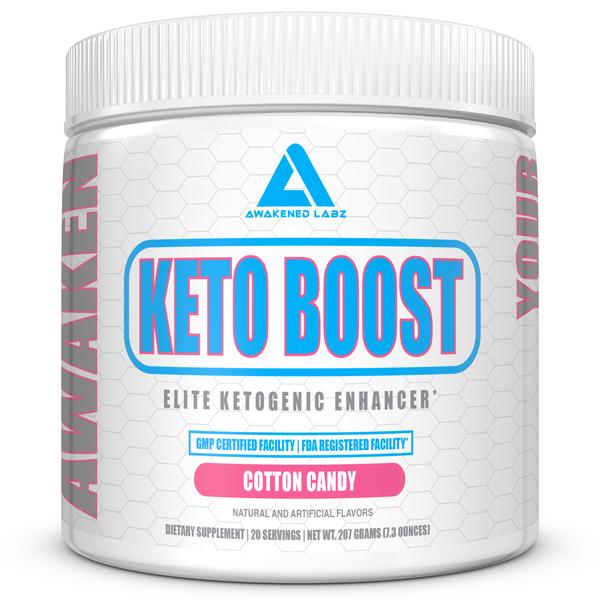 It appears that Awakened Labz Keto Boost claims to have two major sets of benefits: energy/performance and appetite control/fasting benefits. 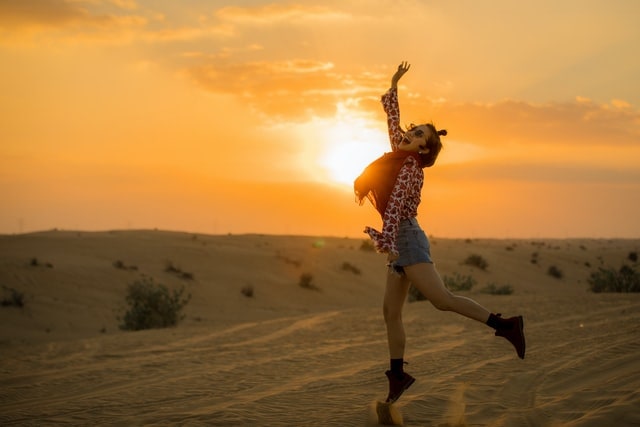 The main ingredient in Keto Boost is sodium betahydroxybutyrate (BHB), which is designed to put you into rapid ketosis. By going into ketosis rapidly and increasing ketone body production, Keto Boost claims to lead to increased energy and enhanced physical performance. Furthermore, Keto Boost is supposed to enhance your cognitive function as well.

Keto Boost also claims to help you fast and control your appetite much easier through relying on ketone bodies for energy. Fasting in and of itself enhances ketone production, but this product is supposed to complement that increase and thus lead to an even easier time going without food. Additionally, this product contains raspberry ketones to aid in appetite control. This is also why Keto Boost is a potential product to help one lose fat.

Keto Boost’s formula is headlined by sodium BHB, but it also contains a handful of other ingredients:

In the paragraphs below, each individual ingredient will be reviewed and analyzed to determine its overall efficacy.

(Note: The serving size is one scoop, so all ingredients will be listed in terms of the dosage per one scoop.) 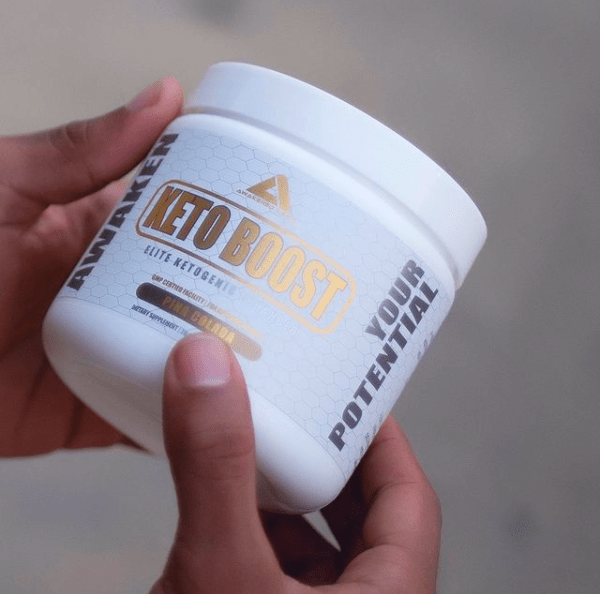 The main ingredient in Keto Boost is Sodium BHB, offering 6 grams of it per scoop. Now, the main benefit from this ingredient is that it will increase ketone body production simply because BHB is a ketone body itself. Thus, taking in these exogenous ketones should put you into nutritional ketosis relatively rapidly and allows you to rely on these ketone bodies for energy.

However, it is unclear if this will work in as little as 15 minutes. Some research shows that taking similar products leads to increased ketone body production relatively quickly, yet the effects fade after around four hours. It’s also important to note that, even though exogenous ketones put you into ketosis, it is still a slightly different state compared to achieving ketosis through diet/fasting.

In regard to the potential benefits, a recent systematic review and meta-analysis found that exogenous ketone supplementation led to no clear benefit on a variety of different types of exercises. Other research shows that exogenous ketone supplementation is more beneficial for low to moderate exercise rather than higher-intensity exercise since the latter relies on glycolytic pathways.

The cognitive benefits of sodium BHB appear to be better than the physical ones. Supplementing with exogenous ketones may improve cognitive performance and decrease the risk for various neurological disorders, including Alzheimer’s.

Keto Boost also contains 50mg of vitamin B6 per scoop, which is a whopping 2,941 % of the daily value. One problem is that it is unclear what form of vitamin B6 is used, so we don’t know the true bioavailabilty of it. Vitamin B6 is involved in a number of processes, including those related to cognitive function and energy production. However, taking more than needed is not necessarily going to lead to increased benefits. Supplementing may lead to a slight energy boost, though getting it from food is probably all that most people need.

Another interesting ingredient is DMAE DL Bitartrate. And this product packs 750mg per serving. DMAE stands for dimetylethanolamine, which is an organic chemical compound found naturally in the body. DMAE essentially acts as a precursor to acetylcholine and is able to potentially boost levels of this neurotransmitter. And since acetylcholine is important for memory, attention, and focus, one can see the potential links between DMAE supplementation and cognitive enhancement.

However, research is lacking to claim any real benefits. It used to be prescribed for children with ADHD and similar issues, and there is some evidence it can help scavenge free radicals in the brain, thus providing some benefits for mental health. And there is plenty of anecdotal evidence, but that outweighs the needed scientific proof for the more specific benefits related to cognitive enhancement.

This product also contains 500mg of inositol per serving. Inositol is found in a variety of foods, and it is pretty abundant in the brain as well and important for a variety of mental and physical processes. Research on inositol shows that it can be beneficial for individuals with mental health disorders, such as anxiety, OCD, and depression, and for those with cognitive impairments, such as in the pre-stages of Alzheimer’s. However, the dosage is usually much higher than 500mg.

It is believed that inositol can help to increase levels of serotonin and dopamine, thus leading to positive mental health benefits. So, this might be of benefit for enhancing mood and mental states, which could carry over into the cognitive benefits claimed by Keto Boost. Yet, the benefits are indirect and speculative again, especially with the moderate dose.

Finally, to round out the ingredients is caffeine anhydrous. Keto Boost contains 100mg of it per scoop. Caffeine is obviously a stimulant, and therefore is thought to promote physical and mental energy. A very large recent review did show that caffeine supplementation leads to a variety of benefits for exercise performance, including muscular endurance and strength, anaerobic power, and aerobic endurance. Furthermore, caffeine anhydrous specifically has been shown to be a slight aid for high-intensity exercises, such as sprinting. However, that study used 300mg, whereas this product contains just 100mg.

So, considering all of the information so far, especially the ingredients, it is probable that Keto Boost will somewhat work, though it is unlikely to provide any major benefits. You definitely should get some benefits from it, just not to the extent that they promote. Based on the ingredients, it is plausible that users will gain some benefits for increased energy, especially for performing cognitive tasks. Sodium BHB and caffeine anhydrous likely will both play a role in doing just that, while DMAE, inositol, and vitamin B6 may play a positive role.

And there may be some benefits for physical exercise and athletic performance, but this will probably be marginal at best. Based on the research with Sodium BHB, low to moderate-intensity exercisers are the ones most likely to benefit, but this is not a guarantee either. 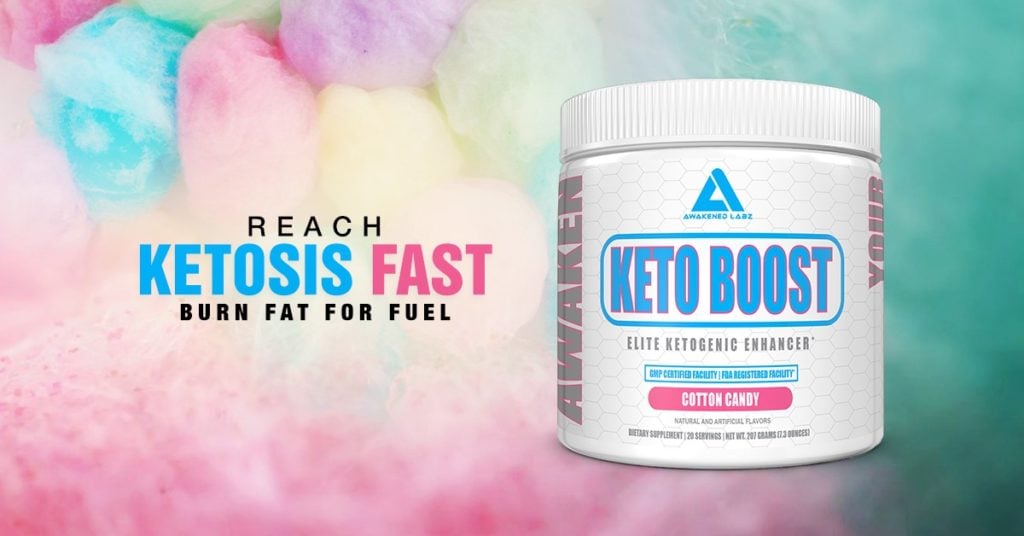 And as for fat loss and appetite suppression, don’t expect anything major here. The research on raspberry ketones is scant and not definitive. Exogenous ketone supplementation (Sodium BHB) may help you to fast easier simply because you will have a source of energy, but there is not enough evidence to check this off as a potent appetite suppresser or fat booster.

The main claim made by Keto Boost is that it can boost ketone levels in as little as 15 minutes. However, there is no research specifically stating that this is true. Yes, exogenous ketone supplementation, including that with sodium BHB, does lead to a relatively rapid ketosis-like state, but we don’t know exactly how soon. Furthermore, since blood levels usually decrease after a few hours, this state is much different from going into actual ketosis through diet/fasting protocols.

Who is Awakened Labz Keto Boost Best For?

As noted, Keto Boost is unlikely to be a spectacular supplement for anybody. With that being said, some people are more likely to benefit than others. Specifically, individuals who engage in low to moderate exercise and/or aerobic exercise may see some benefits. In addition, if you’re looking for a slight energy boost and cognitive “pick-up,” this product might work. If you’re following a ketogenic diet, you could consider using this supplement in addition to other products that can help you stay focused. For example, Keto Cycle is an app that can help you track aspects of your keto diet; there’s also the Keyto Breath Sensor which is designed to tell whether or not your body is in ketosis. 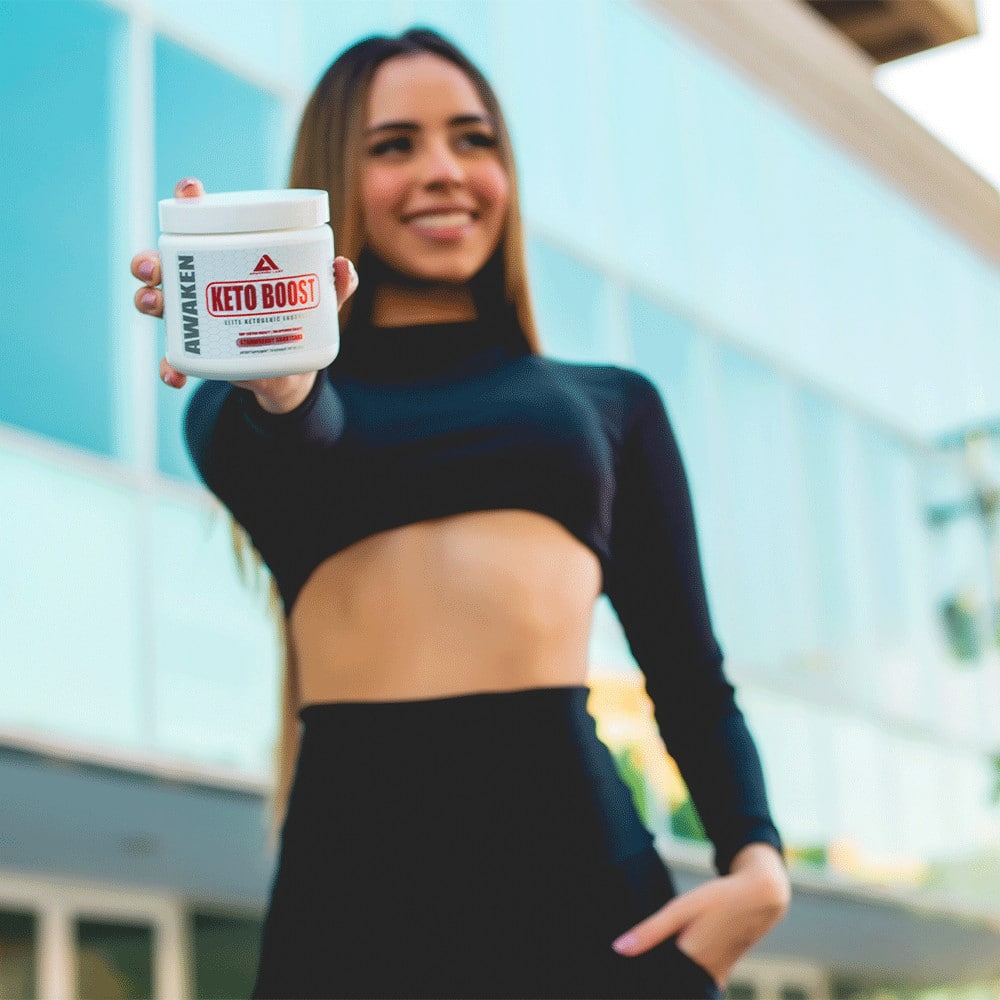 Awakened Labz Keto Boost also has some safety concerns. Sodium BHB and exogenous ketones, in general, can sometimes lead to stomach pain, nausea, diarrhea, and other gastrointestinal issues. These don’t occur often, but it is still noteworthy to list.

Vitamin B6 is likely safe, even at high doses, since it is water-soluble and can be excreted through urine. However, there may be some symptoms until it is cleared out, such as nausea.

There are also a number of risks for DMAE, especially in high doses. It has been associated with insomnia, sneezing, coughing, and wheezing, and other effects. You also shouldn’t take it if you’re pregnant or breastfeeding.

Continuing on with ingredients, inositol is likely safe. There are some mild side effects, such as nausea, headache, and dizziness, but even these usually only occur after taking in large amount (12g or more).

Lastly, there is some concern with caffeine anhydrous, but again, this is probably if you take a dose much higher than the serving size of 100mg. Even still, caffeine sometimes produces jitteriness, headaches, and insomnia, among other concerns.

Finally, with regard to safety practices and standards, there isn’t much listed for Keto Boost. The only thing notable is that it is made in the USA.

With everything considered so far, if you want to give Keto Boost a shot, you can purchase it on the official Awakened Labz website here. The price per bottle is $49.99, and you get 20 servings per bottle, so it is definitely not cheap. 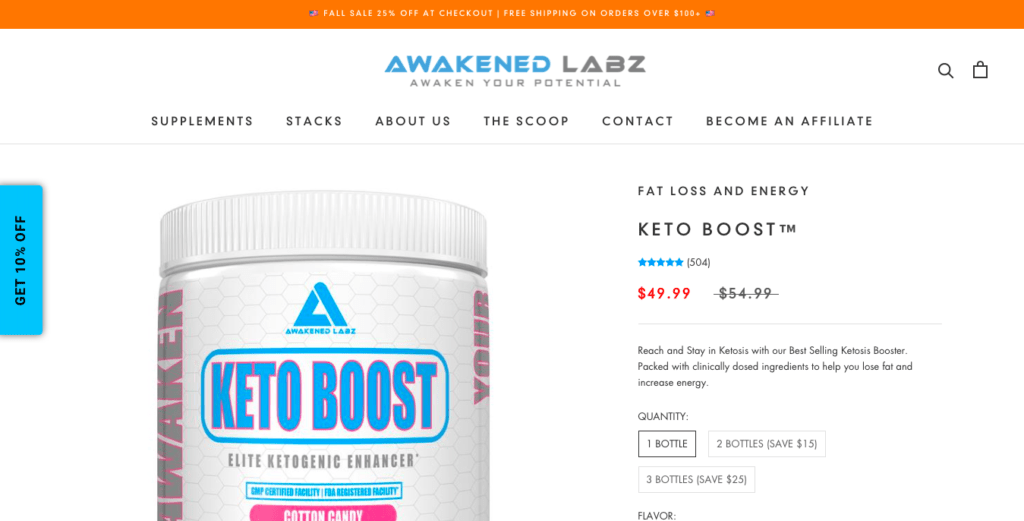 Can you take more than the serving size of Keto Boost for additional benefits?

Yes, but do not exceed more than three servings within a 24-hour period

Can you still consume carbohydrates while using Keto Boost?

Yes. With exogenous ketone supplementation, ketosis can be achieved regardless of dietary preferences. With this being said, the state produced is slightly different from true ketosis.

Vitable Review – Are These Personalized Supplements Worth Using?

Laird Superfood Creamer Review – Will This Make Your Coffee Healthier?

VitalFit Red Root Review – Should You Use This Pre-Workout Supplement?

Omax3 Review – Will This Omega-3 Supplement Help Your Inflammation?

Ritual Synbiotic+ Review – Is This 3-In-1 Gut Health Supplement Effective?