Athletic Greens Vs. Ka’Chava – Which Superfood Supplement Is Top? 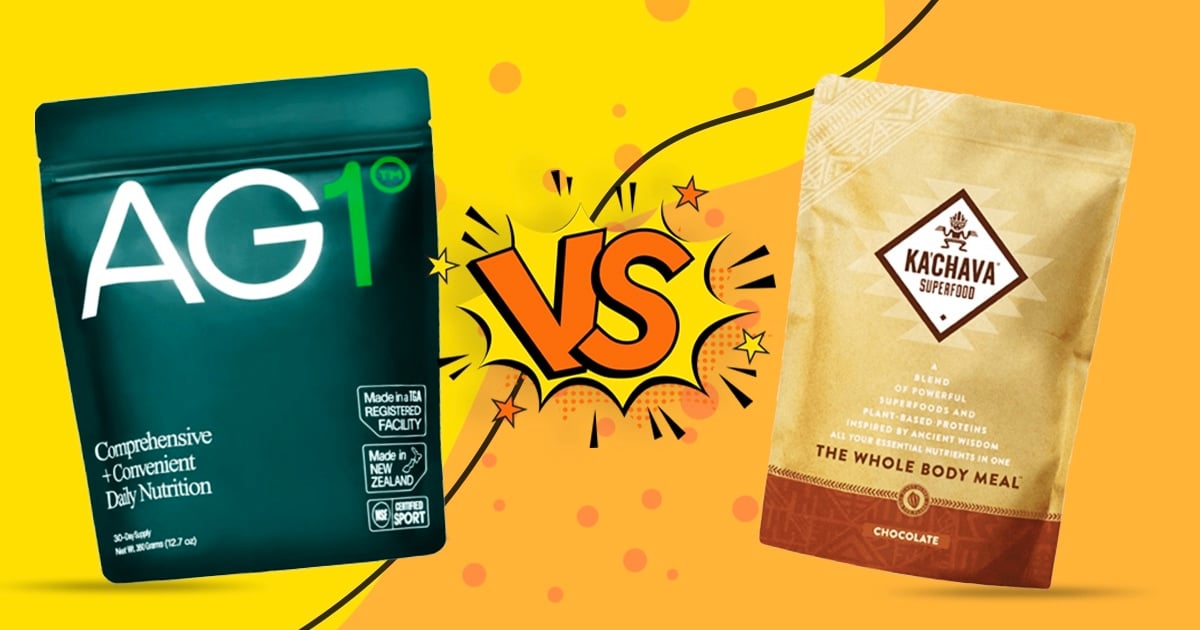 In the world of superfood supplements, perhaps the most popular and long-lasting product is Athletic Greens.

It’s often the first supplement people think of when they think of green drinks.

But of course, there’s another potentially powerful supplement out there, too, that has made quite the stir in recent years. This superfood is called Ka’Chava.

Now, a quick glance at these products, and you can see that they are very similar in terms of their promoted benefits and all of that.

But which of these two powerhouse superfood supplements is better? Or does it depend on certain factors?

We’ll answer those questions and more as we get into this comparison of Athletic Greens vs. Ka’Chava.

About Athletic Greens and Ka’Chava

Athletic Greens and Ka’Chava are both advertised as superfood supplements with a wealth of proposed health benefits. While they are pretty similar, let’s take a look at each supplement and overview what they’re all about.

Athletic Greens is a green drink designed to deliver comprehensive nutrition and health benefits in just one daily drink.

It contains over 75 ingredients, including vitamins, minerals, plant extracts, herbs, adaptogens, and much more. Plus, they say that their formula has constantly evolved and improved over the last 10 years, leading to an increasingly higher-quality product.

The Athletic Greens philosophy is to focus on only the most essential ingredients that deliver health benefits, based on science and research. It is advertised to boost immunity, promote gut health, increase energy, and much more.

Ka’Chava is a daily super blend filled with a boatload of ingredients your mind and body need for holistic health. It is featured by a whopping 85+ ingredients, including various superfoods, vitamins, minerals, adaptogens, fatty acids, and plant protein.

With all of these ingredients, Ka’Chava is essentially designed to be a nutritious meal replacement shake, giving your body all that it needs to start the day off strong.

And it is advertised to deliver 11 “head-to-toe” benefits, including immunity, energy, digestion, stress, and heart health, just to name a few.

These two superfood supplements are certainly eye-catching on their own.

But now we’re going to look at the specific comparisons between Athletic Greens and Ka’Chava. You’ll see that a number of things are similar, but that there are also many factors unique to each supplement.

We’ll go over the main ingredients in each, the benefits, pricing, flavor options, company details, safety and quality, and other factors to determine which superfood supplement reigns supreme.

Below, you can look at the table for a quick reference. But keep reading below that if you want to know the ins and outs of Athletic Greens and Ka’Chava.

Below is a snapshot table regarding some of the key features of Athletic Greens and Ka’Chava:

*Based on original options with no discounts. Other pricing options are detailed below.

With 75 ingredients in Athletic Greens and 85 in Ka’Chava, it’s clear that these are some pretty dense formulas.

And below, we’ll look at the main features of each and see which one may stand out a little above the other.

Both Athletic Greens and Ka’Chava have many different vitamins, including vitamin A, all B-complex vitamins, biotin, vitamin C, and vitamin E.

However, with the exception of vitamin E, Athletic Greens contains much higher dosages of all of these vitamins.

In particular, the higher doses of B-complex vitamins may contribute to higher energy in Athletic Greens.

And higher amounts of vitamins A, C, and E could provide greater antioxidant effects.

Having enough vitamins is crucial for overall health and wellness, including energy, immune function, brain health, and much more.

Minerals are another important aspect of overall health and wellness. They contribute to bone health, nervous system function, heart health, and many other things.

But Ka’Chava also includes 4 minerals, not in Athletic Greens. These are chloride, molybdenum, iron, and iodine.

Iron and iodine stand out since these can be common deficiencies, especially in women and vegetarians.

In terms of dosages, Ka’Chava also generally has higher amounts of the minerals.

Another standout is that Ka’Chava has a lot more magnesium than Athletic Greens, which is important since magnesium is another mineral many people don’t get enough of.

Now, let’s talk about a major aspect of both of these supplements: the green superfoods.

In Athletic Greens, they have a superfood complex weighing over 7 grams that consists of many different greens, including spirulina, chlorella, wheat grass, broccoli, kelp, and spinach. This complex also has fruits, which we’ll detail in the next section.

And in Ka’Chava, they have a super green and vegetable blend that weighs only 500mg. It includes beets, carrots, spinach, broccoli, tomato, kale, parsley, cucumber, asparagus, chlorella, and others.

All of these foods provide an assortment of vitamins, minerals, antioxidants, and other phytochemicals to add immune health, energy, cardiovascular health, metabolism, brain health, and pretty much every aspect of health.

But Athletic Greens likely contains significantly more due to their higher dosage.

Within the same 7+ gram blend in Athletic Greens is also a number of fruits, including apple, acerola, papaya, pineapple, bilberry, and Lycium berry.

And in Ka’Chava, they have a dedicated blend for antioxidants and super fruits weighing over 5 grams. This includes acai, berry, maqui berry, strawberry, tart cherry, blueberry, and other berries for potent antioxidant effects.

It’s likely that Ka’Chava has the edge here for superfood fruits and antioxidant effects.

Both Athletic Greens and Ka’Chava contain a number of different functional mushrooms.

They both have reishi and shiitake, although Ka’Chava also has maitake and cordyceps, so it certainly contains more mushrooms.

We also see a few different adaptogens in each of these supplements.

Adaptogens are important since they help the body better respond to and deal with stress. This can help lower cortisol and lead to improvements in many health areas.

Athletic Greens seems to be the winner here since it has Rhodiola, eleuthero, ashwagandha, and ginger, whereas Ka’Chava just has maca and ginger.

In Athletic Greens, the only enzyme they have is bromelain, which can help digest protein and other ingredients.

But in Ka’Chava, they include 5 different digestive enzymes: amylase, protease, cellulase, lactase, and lipase. And together, these enzymes help digest many different nutrients, including carbs, fat, protein, lactose, and cellulase.

Continuing on with gut health ingredients, Athletic Greens and Ka’Chava both have prebiotics and probiotics.

Prebiotics can increase the number of good bacteria in the gut. And probiotics themselves ARE the good bacteria. So, this 1-2 punch is often used to promote better gut health and digestion.

In Athletic Greens, they have astralagus and burdock root, which provide sources of prebiotic soluble fibers.

And Ka’Chava has inulin, which is also a prebiotic soluble fiber.

Athletic Greens has over 7 billion CFUs, yet in Ka’Chava they don’t say how many CFUs.

But now, let’s get to some of the major distinctions between each product.

One way Ka’Chava stands apart from Athletic Greens is its protein content. It includes 25g of protein per serving in the form of different plant proteins, such as pea, brown rice, and quinoa.

This is compared to Athletic Greens, which only has 2g of protein per serving from pea protein.

Another aspect of Ka’Chava not seen in Athletic Greens is an omega-fatty acid blend.

Ka’Chava has an 11-gram blend consisting of oat, acacia, chia, and flax to deliver fiber and essential fatty acids.

There are also some things Athletic Greens has that Ka’Chava doesn’t, including antioxidant compounds.

Athletic Greens has citrus bioflavonoids, alpha-lipoic acid (ALA), and CoQ10. And these compounds offer potent antioxidant and anti-inflammatory effects and can even decrease signs of aging.

All in all, Athletic Greens and Ka’Chava share a number of potential health benefits due to their similar formulations. In particular, Ka’Chava and Athletic Greens may have the following benefits:

However, there are also some unique benefits for each superfood supplement.

Unique benefits of Athletic Greens may include:

Unique Benefits of Ka’Chava may include:

The overall rating for both supplements is very high. And you can have quite a bit of confidence in these ratings since they both have massive amounts of reviews.

Customers for Athletic Greens generally note increased energy and improved digestion. However, some people complain about the high price and note concerns of heavy metal toxicity in spirulina and other ingredients.

Ka’Chava customers also note better energy as well as increased satiety and better digestion. Many people use it as a meal replacement and enjoy the various flavors.

Athletic Greens vs. Ka’Chava: Other Considerations

There are also some other things to consider when comparing Athletic Greens and Ka’Chava.

Both companies have solid reputations and are dedicated to delivering high-quality nutrition to their customers.

With Ka’Chava, you can get a refund if you’re not satisfied as long as you inform them within 30 days. They also have an “Empty-Bag Policy,” meaning you can return one bag of each flavor even if they’re empty.

Athletic Greens comes in only one flavor, whereas Ka’Chava has multiple flavor options.

Both companies took the time to ensure their products remained free from common allergens.

Another thing to consider is what you actually want to get from these products.

Now, both of them are very similar in that they provide foundational nutrition for overall health and wellness.

With that being said, Ka’Chava is better for those wanting an actual meal-replacement because of its extra calories, carbs, fat, and protein.

But Athletic Greens is better if you are looking for a general superfood drink to take alongside a meal or separate from meals.

In this section, we’ll take a look at product pricing to see which may have the better value.

With Athletic Greens, you can either purchase pouches or travel packs.

So, Ka’Chava is more expensive but keep in mind that it can act as more of a meal, whereas Athletic Greens is just a superfood drink.

With this considered, and given that they both offer similar nutrient profiles, it seems that Athletic Greens may have a slightly better value, but it’s really close.

Athletic Greens vs. Ka’Chava: Which Supplement is Better?

If I had to pick an outright winner, I’d pick Ka’Chava because it includes many of the same ingredients as Athletic Greens while also offering protein, calories, and other nutrients to make it a meal replacement.

With that being said, some of you may not be looking for a meal replacement, in which case Athletic Greens is the better option.

But for most people, Ka’Chava is likely the best choice.

BCAA Vs. Pre-Workout – Which Is The Better Supplement?

Mind Lab Pro Vs. Alpha Brain – Which Brain Supplement Is The Best?

Amazing Grass Vs. Athletic Greens – Which Greens Powder Is Better?

Provasil Vs. Qualia Focus – Which Supplement Is Better For Brain Boosting?

Athletic Greens Vs. Ka’Chava – Which Superfood Supplement Is Top?

TestoFuel Vs. Hunter Test – Which Testosterone Supplement Is More Effective?