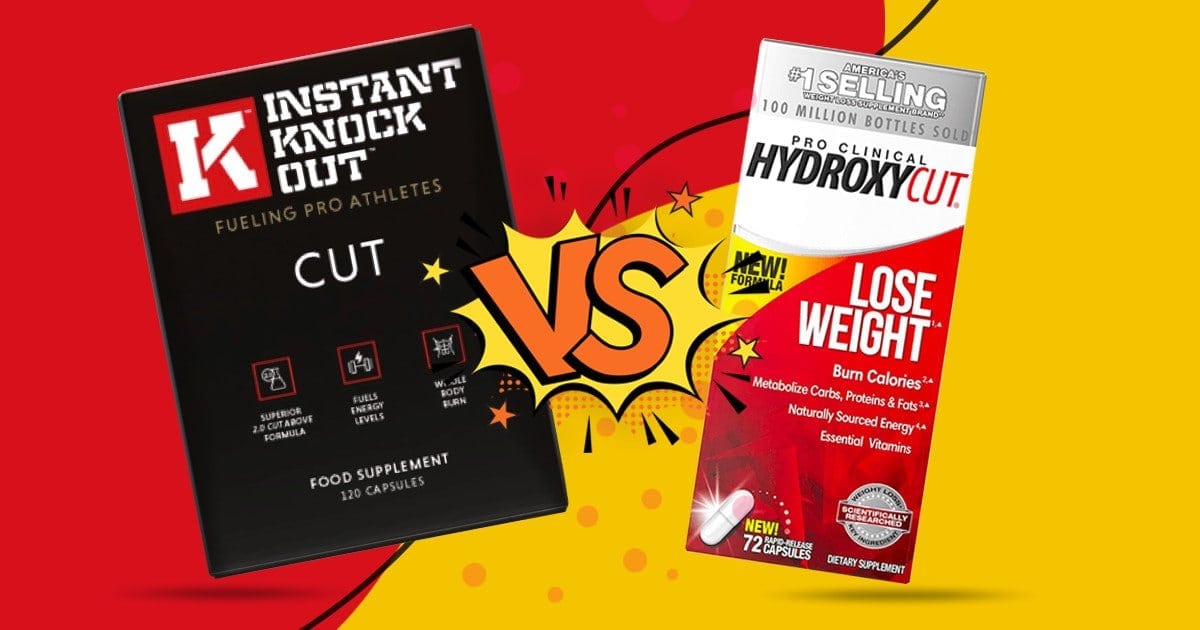 Losing weight and burning fat are two things easier said than done. It takes a large amount of time, energy, and effort to achieve your weight loss goals and most people find it hard to dedicate themselves to the process. If this sounds like you, don’t worry — you’re not alone.

The truth is weight loss comes much easier to some people compared to others. Like anything in life, not everyone is created equal and some people have an easier path or journey when losing weight or burning fat. For those that find it difficult, the good news is it’s not impossible.

In fact, there are plenty of things you can do to put yourself in a position to succeed. While combining a healthy and balanced diet with regular exercise are the two main things you need to adopt, there are a variety of unique supplements that can help give you a much-needed boost.

Two of those supplements that have garnered a lot of interest in the weight loss and fat-burning community are Instant Knockout and Hydroxycut. They’re two of the most popular formulas on the market today and contain a variety of nutrients that help you reach your goals faster.

The question is, which is better? That’s what we are here to decide. We’ll take a closer look at both of these options to see which comes out on top in this comparison of Instant Knockout vs. Hydroxycut!

Instant Knockout vs. Hydroxycut: About The Supplements

Instant Knockout and Hydroxycut are two of the most well-known options in the industry when it comes to weight loss and fat burning. If you’re interested in learning more about these two supplements, you’ve come to the right place. We’re going to break down everything you need to know about Instant Knockout and Hydroxycut, including what they are, the formulas, the benefits, the value, and much more!

What is Instant Knockout?

Instant Knockout is a weight loss supplement that’s brought to you by ROAR Ambition, the same company that offers two other fat-burners (Hunter Burn and Hourglass Fit), as well as testosterone-boosters (Hunter Test, Prime Male, Testofuel), and a nootropic (Hunter Focus).

ROAR Ambition is a supplement company that’s devoted to quality and efficacy. They only focus their attention on safe, natural, and effective ingredients to ensure customer satisfaction and results. In addition to Instant Knockout, Roar Ambition’s product line includes a variety of well-known supplements such as Prime Male, TestoFuel, Hunter Burn, and many more. All their formulas are manufactured in GMP-certified and FDA-approved facilities.

Hydroxycut is largely considered to be America’s #1 weight loss supplement and has been used by millions of people around the world. It’s manufactured by Iovate Health Sciences, the same company that brings us the MuscleTech, Purely Inspired, XP Sports, and Six Star brands.

In fact, Hydroxycut has been around since 1995 and they’ve continued to evolve, dedicating themselves to updating their existing formulas and presenting the supplement community with new options. Of course, they’ve also been met with some controversy over the years.

Their new Hydroxycut formula includes 12 ingredients — Vitamin D, Vitamins B1, B2, B3, B6, and B12, Robusta Coffee Extract, Apple Cider Vinegar, Plum, Baobab Extract, Cardamom, and Coffee Extract. It’s also available in a number of other specialty formulas, including gummies!

Hydroxycut and Instant Knockout are both weight loss supplements that are widely available on the internet today, but they’re far from being similar and carry a variety of differences. In fact, the two formulas only share 3 ingredients in common — Vitamin D, Vitamin B6, and Vitamin B12.

Searching for a quality supplement that can help you achieve your goals isn’t the easiest thing in the world. With so many supplements and formulas to choose from, you must do your research and diligently break down each formula ingredient-by-ingredient to get a feel for its effectiveness.

Don’t worry, that’s what we’re here for. If you’re interested in either of these two supplements — Instant Knockout or Hydroxycut — we’re going to break down what’s similar between the two and what’s different. This should give you a firm idea of what to expect from these formulas.

With different ingredients come different expectations, benefits, and eventually (hopefully) results. Although Instant Knockout and Hydroxycut are designed to do the same thing — help you lose weight — they do so in completely different ways, as you can tell from the ingredients.

Now that you understand what you’re getting out of the formula, let’s take a look at some of the most prominent benefits of each supplement. Of course, it’s important to note that supplements aren’t a one-size-fits-all solution. They’re not going to work for everyone, so keep that in mind.

Like we mentioned above, supplements aren’t a one-size fits all solution. What works for one person might not work the same for another person. The truth is you never truly understand how effective a supplement is until you try it. Of course, customer feedback still holds some weight.

By reading the reviews, testimonials, and feedback by verified customers, you can get a sense of how they fared with the supplement. You want to be on the lookout for any side effects, but you should be fine as long as a majority of people have a good experience with the formula.

Instant Knockout is a newer weight loss supplement, but it has already garnered a lot of interest in the supplement community — despite only having five customer reviews on their official website. The good news is all five reviews rated it 5.0/5.0 stars and are frequent buyers.

Those that rated it high were reporting real results, less appetite, better workouts, and reduced weight when combined with a healthy diet and regular exercise routine. Those that rated it low reported some side effects and no change in weight, though that’s expected with any formula.

On the other hand, Hydroxycut has been around for over 25 years and has been used by millions of people. They have a total of 249 reviews on their website and an impressive 4.9/5.0 star rating. 204 of those reviews rated it 5 stars, 41 rated it 4 stars, and 4 rated it 3 stars.

It should be noted that Hydroxycut does have a history with the FDA. In 2009, the FDA issued a warning, citing serious medical problems and even one death that resulted in the formula being recalled. Of course, that was over 10 years ago and they’ve since created a new, safer formula.

Instant Knockout vs. Hydroxycut: Other Considerations

By now, you pretty much know everything there is to know about Instant Knockout and Hydroxycut, but we’re not done just yet. There are still a few considerations and qualities that we haven’t touched based on just yet. Don’t worry, we’re not going to leave you hanging here.

Below, we’re going to list out some last-minute considerations that are worth knowing before you make a final decision.

Of all the things we’ve discussed regarding Instant Knockout and Hydroxycut, the one thing we haven’t gone over is the pricing for each supplement. As you can imagine, the cost of each formula will likely play an important role in your decision when finding the best supplement.

Instant Knockout is certainly the more expensive one. It costs $59 per bottle and will last one month when taking it daily. You receive free shipping when buying 2 or more bottles, get a bottle free when purchasing 3 bottles, and save 10% with a subscription (you choose the frequency).

Hydroxycut is much less expensive, which is why so many people have taken a liking to it. It only costs $19.99 per bottle and will last you one month when taking it daily. They offer a buy 2, get 1 free promotion, which you can mix and match with any of their other specialty formulas.

Instant Knockout vs. Hydroxycut: Which is Better?

In terms of formula, Instant Knockout is certainly the better of the two formulas. This is largely due to the presence of L-Theanine, which reduces the caffeine side effects (jitters and crash), and Cayenne Powder, which promotes thermogenesis and is a heavy metabolism-booster.

With that said, Instant Knockout is three times as expensive as Hydroxycut. While you definitely get what you pay for in this scenario, Hydroxycut does come with some benefits and is a decent option for those on a budget. You won’t find weight loss supplements as cheap as Hydroxycut.

It’s important to note that neither of these two supplements will work for everyone. If you’re willing to spend a little more cash, Instant Knockout is the better option. If you’re on a budget and want to see if Hydroxycut works for you, then rest easy knowing it’s safe — unlike in the past. You can also get a more in-depth look at both options in our full review of Instant Knockout here and our full review of Hydroxycut here.

Regardless, both formulas contain 200mg of caffeine, so expect quite the energy boost. You shouldn’t combine either of these two supplements with any other stimulant-containing supplements and should be careful when drinking too much coffee, soda, tea, or other caffeinated beverage.

Pre JYM vs. C4 – Which Pre-Workout Powder Is Better?

Focus Factor Vs. Prevagen – Which Supplement Is Worth Trying?

Prime Male Vs. TestoFuel – Which Testosterone Booster Is More Effective?

Vital Reds Vs. Revive Reds – Which Polyphenol Powder Is Best?