Toxin Rid Review – How Effective It Is In Removing Toxins From The Body? 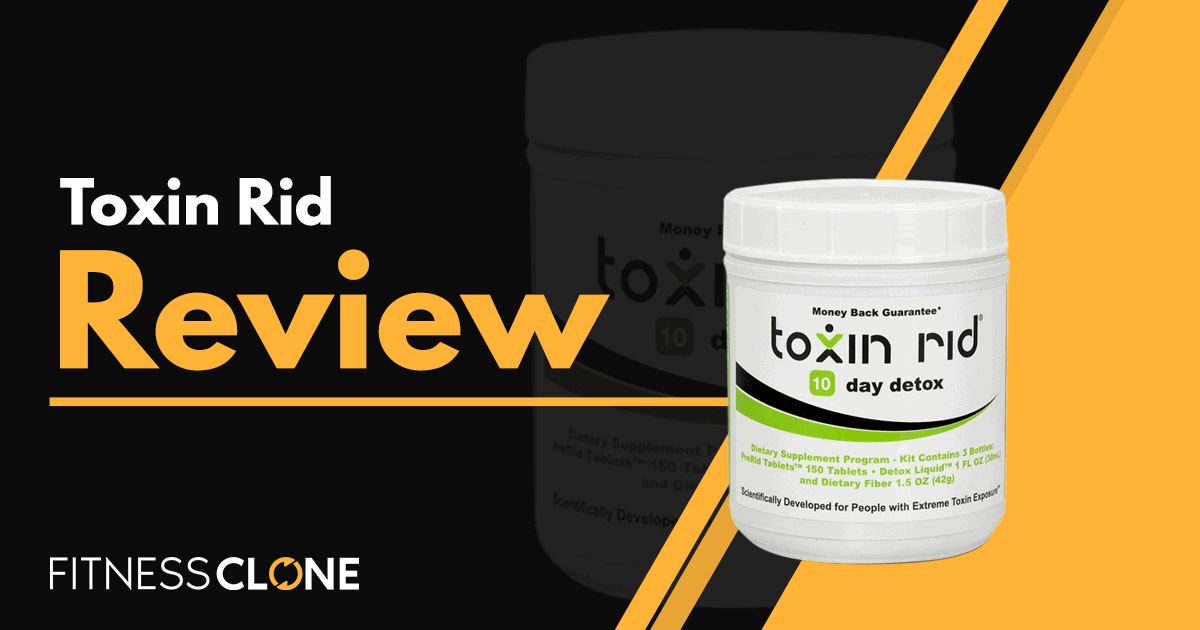 Whether you’re living a healthy, active lifestyle and just need an annual “spring cleaning” to tune things up, or if your toxic exposure is more intense, Toxin Rid has a formula for you. They claim to rely on all-natural products that use no fillers, synthetic ingredients, or animal products to remove harmful toxins from your system, and they have formulas that last from 1-10 days, depending on your level of toxic exposure.

Ss Toxin Rid really worth the price? Let’s find out in this review of Toxin Rid.

Toxin Rid combines minerals, plant compounds, and fiber all meant to absorb and rid your body of toxic waste in convenient 1, 2, 3, 4, 5, 7, or 10-day formulas, depending on your level of need. The products all work naturally with your body to enhance its own detoxing so that you have less inflammation, oxidative stress, and risk of chronic diseases such as cancer and diabetes.

They’re backed by a full 100% money-back guarantee from the manufacturer so long as you have a receipt, UPC proof of purchase, and “proof of experimentation results.” The products are also certified gluten-free and vegan.

Removes unwanted toxins from your blood, saliva, and urine

Whether you live in an urban area, the pristine countryside, the day-to-day toxins of our modern world build up in you. This is because our air, water, and food supplies all deliver residue from pollutants that become trapped inside you and lead to inflammation, obesity, and chronic disease.

But by combining minerals, fiber, and metals all proven to absorb and flush away toxins, your entire body, including your blood, saliva, and urine, are cleaned up to leave you looking and feeling your healthy best.

With formulas that work in as few as 1-day, or as many as 10, Toxin Rid has a formula for your level of need.

At between $55 to nearly $200, this stuff isn’t cheap, though it’s guaranteed to work, or you get your money back. Granted, their return policy is rather wacky, contradictory, and apparently left to their discretion, though let’s hope they stand behind their product if it doesn’t work for you since that’s a lot of money to risk.

While other toxin ridding supplements may include very few ingredients, such as Hum Air Patrol, Toxin Rid uses a wide variety of ingredients within its formula. We will take a closer look at each ingredient below.

Though it’s nearly indigestible to you in its whole form, alfalfa does contain lots of fiber and nutrients that can whisk away waste.

Rich in fiber, antioxidants, and cleansing minerals, kelp can reduce oxidative stress by battling free radicals and flushing toxins from your blood, urine, and bowels.

By being a healthy source of minerals such as magnesium, zinc, and iodine, it can not only help you detox, but boost your immune system, relax you, and help safeguard your thyroid against radioactivity as well.

Okay, this is where this product becomes confusing, and the company’s credibility takes a hit. Let’s start with the fact that there’s NO indication of what’s in Toxin Rid anywhere on the company’s website, and the company needs to be contacted if you’d like an ingredient list.

Really? Maybe it’s just us, but this makes it seem like they’re trying to hide something.

Now let’s move on to the ingredients included that most detox formulas are meant to remove from your system rather than add to it. For instance, why would a neurotoxin created as a by-product of fertilizer production such as fluoride be included in a product meant to improve your health? Sure, we’ve all been told that it helps prevent cavities, though what we’re NOT told is that fluoride often contains arsenic and lead—not to mention that it’s an industrial waste product.

We could go on about fluoride alone, though there are other ingredients that do have merit when it comes to ridding your body of toxins. For instance, gold absorbs radiation, and chromium (we’re talking about the safe kind here, Erin Brockovich) is a potent antioxidant. Other elements in the formula are also antioxidants or are able to absorb and rid your body of toxins so that all you need to do is use the product as directed, which means drinking PLENTY of water and avoiding the consumption of the very toxins you’re attempting to rid your body of.

Used as directed along with plenty of fluids and a clean diet, Toxin Rid is mostly an effective product.

Again though, we question their inclusion of such ingredients as fluoride, and other ingredients such as rare earth elements like Holmium that don’t seem to have much science behind their use in detox. In fact, while Holmium may stimulate your metabolism, it’s one of the least-common elements in your body and has a very low toxicity rating, which means adding more may not be in your best interest.

Other than that, it’s an outstanding source of fiber to clean you from the inside and improve your gut health.

Who Is Toxin Rid Best For?

In fact, even those who engage in good health practices such as healthy eating, drinking plenty of water each day, and exercising are subject to the buildup of toxins. This can result in everything from behavioral issues, to obesity, to chronic disease such as cancer, making detoxing at ANY level a critical concern.

But those under the age of 18 or who are pregnant, or breastfeeding should consult with their doctor or avoid this product altogether, as should anyone on prescription medication.

Alfalfa should also be avoided by those with weakened immune systems, and it also boosts estrogen production in the body, so those not looking for extra estrogen should also beware. 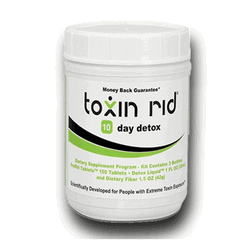 Best Deal on Toxin RidWe scour the web for the best deals on supplements. Want the best price? Click the button below for the best savings!GET THE BEST PRICE

The reality is that this product has some questionable ingredients in it. Though we may be missing something here, we’re still quite skeptical about ingredients such as fluoride or Holmium in a product meant to detoxify the body.

Other than that, Toxin Rid does deliver a healthy supply of fiber along with some good detox ingredients such as kelp, so it should at least deliver some good results.

Even so, we’re more concerned with detoxing from fluoride, not with it.

Let’s just say that any product meant to detox you that contains toxins isn’t such a great product. No, there aren’t any immediate side effects for most, though, as stated above, we consider some of Toxin Rid’s ingredient choices to be questionable at best.

Other than that, as with any product containing high fiber, a bit of gas, bloating, and time on the throne may be in order for you at first. This does alleviate within a short time, though be prepared at first.

You may also see some acne along with increased urination (and don’t skimp on the water just because of this, by the way), which is a good thing since both indicate that toxins are leaving your body.

Other than that, clearer thinking, clearer skin once the initial part is over, and a little weight loss are all positive side effects you’re likely to feel, not to mention a boost in your energy and confidence!

Where To Buy Toxin Rid

With no discounts in sight and the 1-day version starting at $54.95, this product is wicked expensive. The 10-day version goes all the way up to $189.95, which really deflates its value, especially when you consider some of the questionable ingredients in it.

Plus, there’s that whole issue with transparency—any reason no ingredients are listed on the company’s rather crappy website? This comes off as them trying to hide something, which very well may be the case. Frankly, we feel that for such a high cost, more time, research, and commitment to better ingredients should be in order.

But, if you’re good with all that, along with Toxin Rid’s site you can find the product on Amazon and other corporate and independent online retailers, and possibly at traditional retailers such as Walmart and Walgreens. However, we weren’t unable to confirm this.

Overall Rating: 3.06 out of 5
Categorized in: Detox Reviews, Reviews